A man was arrested Tuesday evening after he opened fire in a New York City hospital earlier that day (Pictures: NBC 4; Twitter/NYC Mayor)

Gun violence continues to climb in New York City, where on Tuesday a gunman opened fire in a hospital waiting room and shot another man four times before fleeing.

Keber Martinez was arrested just before midnight, almost 12 hours after he reportedly fired multiple shots at a patient at Jacobi Medical Center in the Bronx. The 25-year-old suspect was tracked down by police because he had signed in at the hospital to receive medical treatment, reportedly having asthma issues.

Martinez was waiting to be seen by nurses when he ‘exchanged looks’ with another man in the waiting room at Jacobi Hospital, NBC New York reported.

Dramatic surveillance footage shows the suspect pulling out a gun while standing in front of the receptionist’s desk. Martinez, who is believed to have been wearing a black hoodie, can be seen in the footage charging at another man in a red jacket, and firing his gun several times in the waiting room. 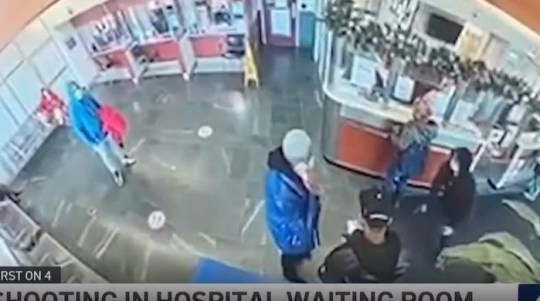 Surveillance footage revealed how several other patients were within close proximity during the shooting (Picture: NBC4 New York)

Several patients were in the same waiting area when the gunfire broke out.

The 35-year-old victim was struck once in the arm, and quickly taken into an operating room to receive medical attention, according to authorities. They are expected to recover.

No hospital staff were injured in the shooting.

Jacobi Medical Center was locked down as a precaution following the incident, which officials believed was an isolated event.

Police sources told NBC that it appeared the victim and Martinez knew each other.

Martinez was charged with attempted murder, reckless endangerment and criminal possession of a firearm. He was reportedly arrested after his sister called 911 because he had been acting erratically.

His sister told authorities he had been hearing voices and that he had a gun.

The shooting is the latest episode of gun violence in New York City, which Mayor Eric Adams has vowed to end across the five boroughs. Adams presented his ‘blueprint to end nonviolence’ earlier this week, outlining immediate actions and more long-term initiatives.

In a tweet, Adams admonished the act, and said he was planning on visiting the victim.

‘This was a reprehensible act, one made even worse by the fact that it happened in a place where New Yorkers go for safety and to heal,’ he added.

The mayor also called upon the federal and state governments for further assistance in helping the city reduce gun violence.

The horrifying shooting comes days after two New York City police officers were fatally injured when responding to a domestic disturbance in Harlem.

Officer Wilbert Mora, 27, had been in critical condition since the fatal shooting Friday evening, which took the life of his police partner, 22-year-old Jason Rivera. The two officers had responded to a call made by a woman in Harlem who said she needed help with her adult son.

Rivera and Mora’s deaths are the first police line of duty fatalities in New York City in 2022, and were the second and third officers to be shot in less than a week during a time where gun violence in the city is on the rise.