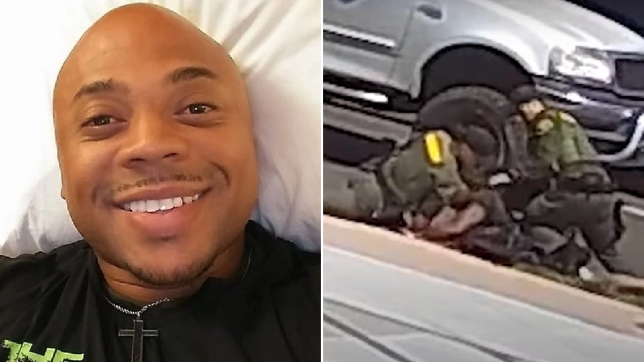 A newly released video package showed homeless man Kurt Reinhold, left, being arrested for jaywalking and shot dead after one cop accused him of stealing his gun. An investigation into the killing continues

New video footage has been released after a homeless black man was shot dead by cops who stopped him for jaywalking. The clips show the moment Kurt Andras Reinhold, 42, was stopped by Orange County Sheriff’s deputies on September 23 last year.

Reinhold was killed one of the deputies accused him of stealing his weapon during a struggle, but it is unclear whether the shooting victim was actually unable to unholster the gun in question.

Dashcam footage from the deputies’ car captured the moment the distressing incident began to unfold. One of the two officers could be heard to say ‘Watch this, he’s going to jaywalk.’

The pair – both homeless outreach officers – then debate over whether Reinhold committed the crime of crossing a road outside an authorized pedestrian crossing.

Reinhold is then confronted by the cops after they pulled up alongside him. He can be heard to complain that he doesn’t know what he has done wrong, and answered: ‘That’s ridiculous,’ when told he was resisting arrest for jaywalking.

Another video, shot on a mobile phone by a bystander, showed Reinhold arguing with the deputies, and one of the two officers shoving him as he began to walk away. Moments later, the deputies – an eight year veteran, and 13 year veteran – tackle Reinhold to the ground, with sheriff’s officials claiming the pair were trying to ‘gain control’ of him.

That fight was captured by a security camera from a nearby motel, with all available videos combined into the package released by Orange County Sheriff’s Office on Thursday.

Shortly afterwards, one of the deputies shouts ‘He’s got my gun,’ with the other deputy firing two shots moments later. Reinhold was shot dead around three minutes after he was first apprehended by the deputies.

Distressing video shows deputies attempting to perform CPR on him after the shooting.

His family have filed a wrongful death lawsuit, and say the newly-released videos confirm their belief that Reinhold was apprehended for ‘no reason.’

Family lawyer John Taylor told KTLA: ‘The OC Sheriffs Homeless Liaison Officers use pretext reasons to stop anyone for any reason they want, simply to harass the person.

‘These officers created and escalated the confrontation with Kurt Reinhold causing his death.’

An investigation into the shooting continues, and the deputies involved could face criminal charges.

Interactions between law enforcement officials and black Americans have come under increasing scrutiny since George Floyd was killed by Minneapolis Police in May 2020.

Black Lives Matter campaigners say African-Americans are far more likely to face violence or death at the hands of the people tasked with protecting society.