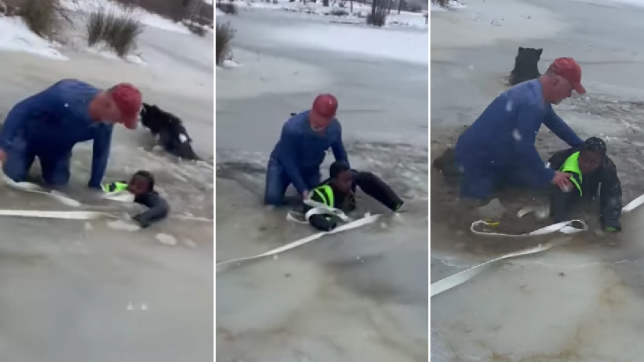 Caitlyn Thomas saved a young boy from certain death after she spotted him in an icy pond, and called her grandpa for help (Pictures: Caitlyn Thomas)

An 18 year-old girl captured the moment she helped save a young boy who had fallen through a frozen pond and was so cold he couldn’t cry for help. Caitlyn Thomas spotted the stricken youngster while walking her Labrador in Jefferson, Texas, on Wednesday afternoon.

She said: ‘I was playing on my phone and then I look up and I see this little image in the water and I walk up to it and realize it a little boy. It instantly clicked in my brain like, “Oh my gosh, I have to help him!” He wasn’t responding. He was just looking at me. It was scary.’

Caitlyn tried banging on the doors of nearby houses, but no-one answered. She dialed 911, but struggled to explain the location to the dispatcher, and feared time was running out for the trapped youngster.

So the teenager then called her grandfather Randy Thomas, who lives a block away. Randy, a trained scuba diver, leapt into the water in just his t-shirt and jeans to get to the trapped boy. Caitlyn filmed the dramatic rescue and later shared clips on her Facebook page.

The youngster was too cold to reach for a rope attached to Randy’s truck, but was eventually pulled out of the water by other helpers who had gathered. Marion County Sheriff’s Office said the boy, who has not been identified, returned home to his mother shortly after, and is expected to be okay.

They credited Caitlyn and Randy for saving the child’s life, telling ArkLaTex Homepage: ‘The quick thinking of the caller and the actions of the neighbor helped save the juvenile from further harm.’

Caitlyn says she is glad she decided to walk her dog that day. Texas has been hit by a freak blast of icy weather, blanketing much of the normally-balmy Lone Star State in snow and ice.

Safety officials have urged families to warn children who may never have witnessed snow or ice before of the dangers posed by frozen lakes, ponds and pools.