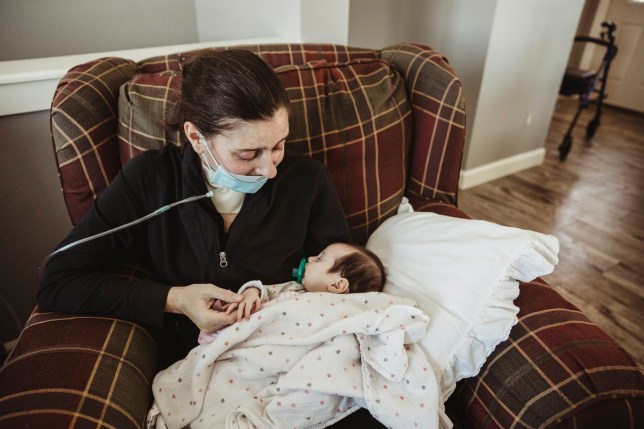 Kelsey Townsend meets her daughter Lucy for the first time face to face in Poynette, Wisconsin, after spending 75 days in a medically-induced coma (Picture: AP)

A mother who gave birth when she was in a coma has finally held her baby for the first time three months after she was born.

Kelsey Towsend, 32, was in a medically-induced coma with Covid-19 when delivered her baby, Lucy, via cesarean on November 4 last year.

She was fighting for her life on ventilators at the time, and went on to spend another 11 weeks on life support before her condition gradually improved, and she was finally able to meet her baby face to face on January 27.

Mother-of-four, Kelsey, from Poynette, Wisconsin, was around three months pregnant when she was admitted to hospital with a severe case of Covid. Her husband, Derek, said the pair contracted the disease despite taking precautions.

As he got better, his wife got worse, and Kelsey was ultimately placed into a medically-induced coma late October at St. Mary’s Hospital in Madison, Wisconsin.

She ended up spending 75 days on life and lung support before – with the help of doctors – Kelsey was able to fight off her Covid infection.

Kelsey met Lucy when on the same day she was discharged from hospital and said: ‘Hi. I love you, I love you so much. Yeah, I’ve missed you.’

Kelsey added: ‘We instantly bonded when we met. She gave me a great big smile and looked at me like she knew exactly who I was and that made me feel just so happy.’ 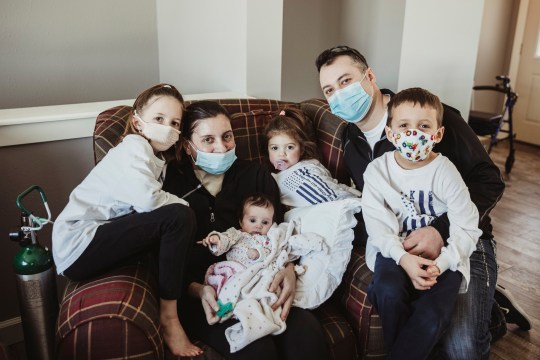 Kelsey pictured with her husband Derek and their four children Credits: AP)

Dr. Jennifer Krupp, a maternal fetal medicine specialist for the Wisconsin region, said it has been rare for the hospital to deliver a baby to a mother so sick with Covid

Kelsey’s oxygen saturation was very low when she arrived at the hospital — so low that a fetus’ brain and other organs could be damaged — and her skin was tinged grey and blue, Dr. Thomas Littlefield said.

That meant Kelsey’s baby had to be delivered as soon as possible to give her the best chance of survival.

Doctors thought Kelsey might need a double lung transplant at the end of December due to the effects of Covid on her vital organs. But as she started to improve, Kelsey was moved out of the intensive care unit, taken off a ventilator in mid-January and removed from the transplant waiting list.

Derek Townsend described the experience as one ‘big roller coaster’.

He said: ‘There was many, many nights that I would get phone calls late at night and into the early morning, and the doctors kind of informed me that they’ve done all that they can to support Kelsey and they’re having a hard time stabilizing.

‘So there was many times that we thought we were going to lose her.’

Derek Townsend says even his baby daughter seemed to notice someone was missing when his wife was still hospitalized.

‘The past three months with Lucy, you know, her head is always moving and she’s always looking’, he said.

‘And I told Kelsey that I believe she’s just constantly looking for her.’

Kelsey added: “Family is everything to me.

‘So I have everything to live for right here and coming home. There was no question that I wouldn’t.’