The NFL plans to play the song ‘Lift Ev’ry Voice And Sing’ at week one games of the new season (Picture: Getty)

The NFL is planning to play a song recognized as the ‘black national anthem’ at every match on the opening day of the new season.

The song ‘Lift Ev’ry Voice And Sing’ will be performed or played by a live band before the traditional US national anthem, ‘The Star-Spangled Banner’, when the 2021 season kicks off on September 10.

A source familiar with the league’s discussions on the matter confirmed the change to ESPN’s The Undefeated.

The Star-Spangled Banner has been played before every NFL game for decades but if these new plans go ahead, it will be bumped down to second in the pre-match running order for the season opener between Kansas City Chiefs and the Houston Texans. 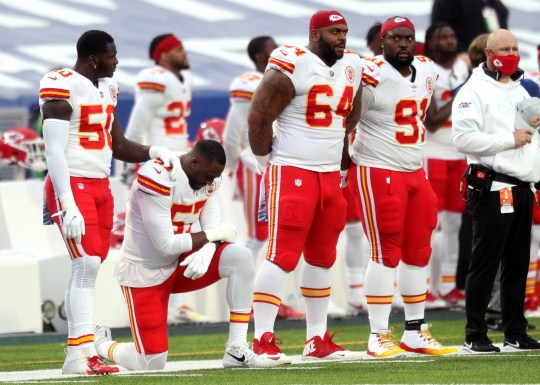 Alex Okafor of the Kansas City Chiefs kneels during the national anthem prior to the game against the Buffalo Bills at Bills Stadium on October 19, 2020 (Picture: Getty)

It’s then thought that Lift Ev’ry Voice And Sing – traditionally referred to as the black national anthem – will be played first at every other match in the US on week one of the season.

The NFL, in collaboration with the NFL Players Association, is also considering featuring names of victims who suffered police brutality on uniforms, helmets or patches on jerseys, The Undefeated reported.

The decision comes as the league hopes to demonstrate ‘a genuine commitment to the public, players and coaches and that player voices continue to be heard,’ the source wrote in a text message to the outlet.

‘This is key to educating fans, and becoming a prominent voice in the fight to end racism’, they said.

The source added that the league is also considering producing educational programs about police brutality victims, among other plans.

According to reports the NFL plans to make the song Lift Ev’ry Voice And Sing a ‘prominent part of big league events’. 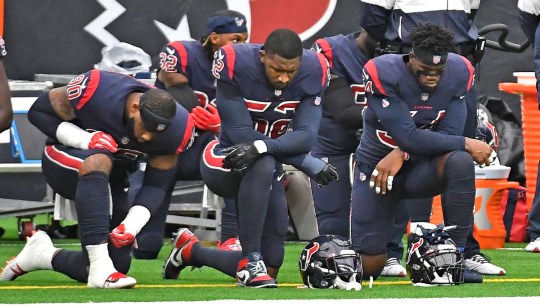 The Houston Texans observe the playing of the national anthem prior to the game against the Green Bay Packers at NRG Stadium on October 25, 2020 in Houston, Texas (Picture: Getty)

Front Office Sports has suggested that it could be played before prime time games, the Super Bowl and the NFL draft, in addition to opening weekend games.

In recent years the NFL has displayed an increased emphasis on raising awareness about the issues of systemic racism, with NFL commissioner Roger Goodell admitting the league was wrong in how it approached NFL player protesting police brutality and systemic racism.

In a 90 second video uploaded to Goodell’s Twitter account last month, he condemned racism, pledging his allegiance to equal justice for players and affirming that black lives do matter.

‘We, the National Football League, condemn racism and the systematic oppression of black people’, Goodell said.

Goodell continued by saying he would begin connecting with players who are making their voices heard to help make a difference.

‘Without black players, there would be no National Football League, and the protests around the country are emblematic of the centuries of silence, inequality and oppression of black players, coaches, fans and staff’, he said.

In 2016, former San Francisco 49ers quarterback Colin Kaepernick, along with other NFL players, began kneeling during the US national anthem to raise awareness of racial injustices.

The on-pitch demonstrations ignited national debate and led to more people taking the knee as a statement of their unrest at racism and race issues.

The symbolic stance is now recognized around the world and is still used on a weekly basis in the UK’s soccer leagues, as well as in Europe.