Student hanged himself in dorm because of ‘Covid lockdown loneliness’ 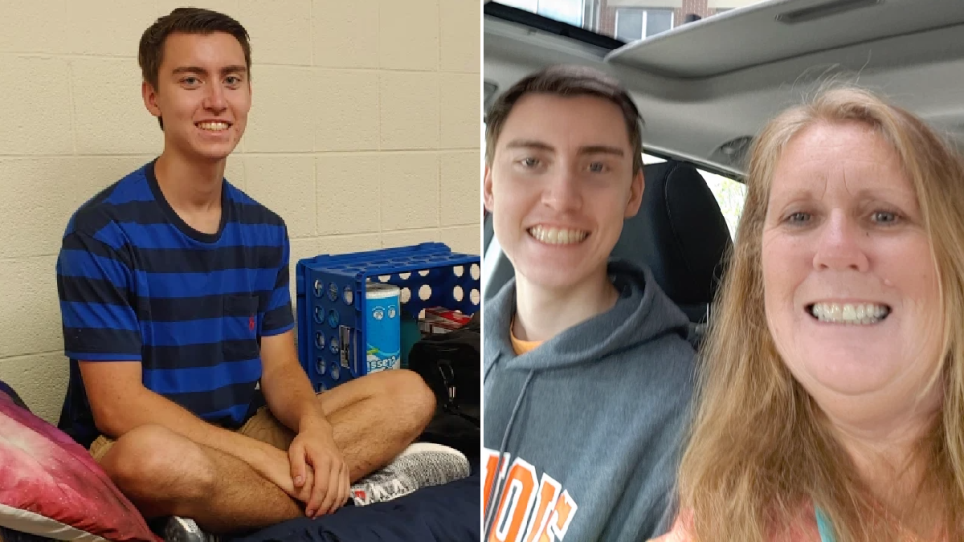 A student hanged himself in his college dorm because of ‘total Covid isolation’ and loneliness during lockdown, his mother has said.

Trevor Till, 18, tragically took his own life in October 2020, just two months after moving into college accommodation where he lived alone, was taught virtually and was never given the chance to make friends.

He’s a ‘victim of Covid’ according to his heartbroken mother, Lisa Moore, 56, who is speaking out to encourage other parents to keep a check on their children’s mental health amid the pandemic.

Mother-of-five, Lisa, from Ottowa, Illinois, said Trevor never displayed any worrying warning signs and only ever said ‘he’s sad’ because of lockdown. She has recalled the last time she ever spoke to Trevor – a phone call over dinner just a few hours before police think he died – when he told Lisa he’s ‘doing fine’.

Speaking to Metro.co.uk Lisa said: ‘He would still be alive if he stayed at home with me.

‘When he moved into his college dorm he was really excited for the college experience. But he only had two classes in person and students were discouraged from all activities. 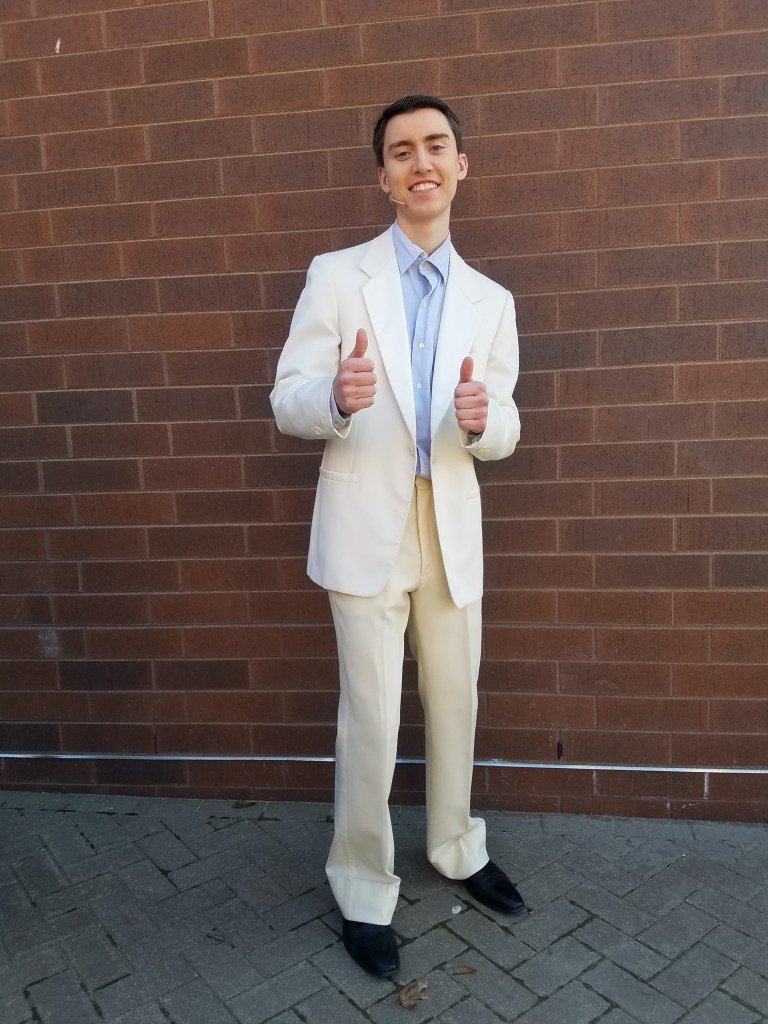 Trevor was a new student at the University of Illinois (Picture: Lisa Moore/metro.co.uk) 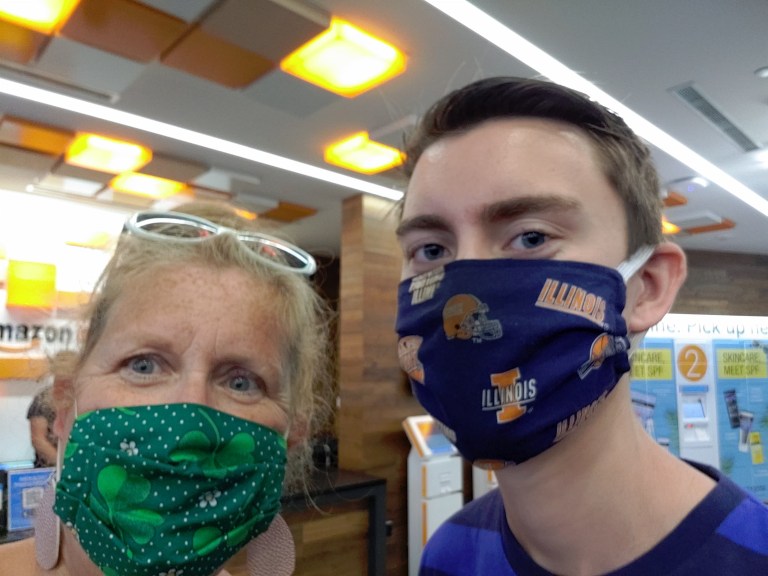 Trevor pictured with his mom, Lisa, before he moved into university (Picture: Lisa Moore/metro.co.uk)

‘He didn’t have a roommate, his roommate was from India and couldn’t come over because of Covid so he was on his own.

‘It was total Covid isolation, he was in his room all the time and he kept trying to make it work, but it just got too much for him.

‘He did tell me he was sad and we talked about it and I told him I understood. I told him to maybe try to speak to someone down there about his problems but we don’t know if he actually did or not.

‘I was the last person to speak to him, on the Sunday evening. We spoke on the phone, he was eating dinner an he sounded ok.

‘He said he was fine and we made plans to go for dinner at the start of November.

‘His father was trying to call him and we couldn’t get hold of him, so the university police did a welfare check on the Wednesday.

‘They found him passed out in his room. Police said he hung himself.’

While Trevor was found on October 21 police believe he died on October 19 in the early hours, following his phone call with Lisa the previous night. 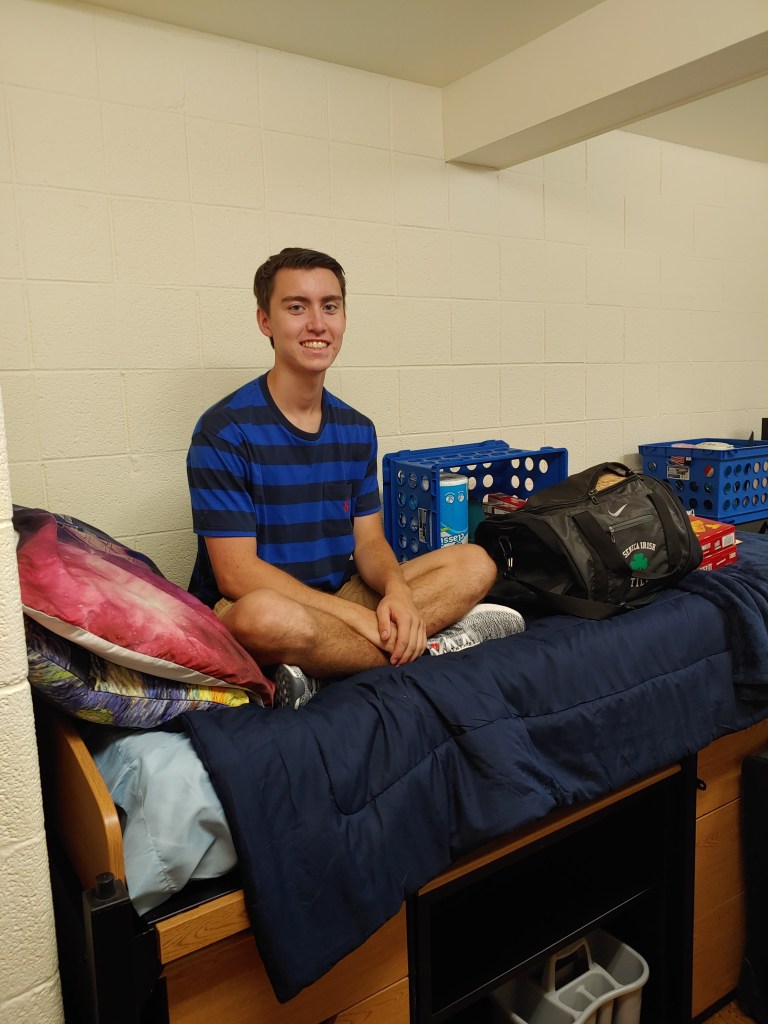 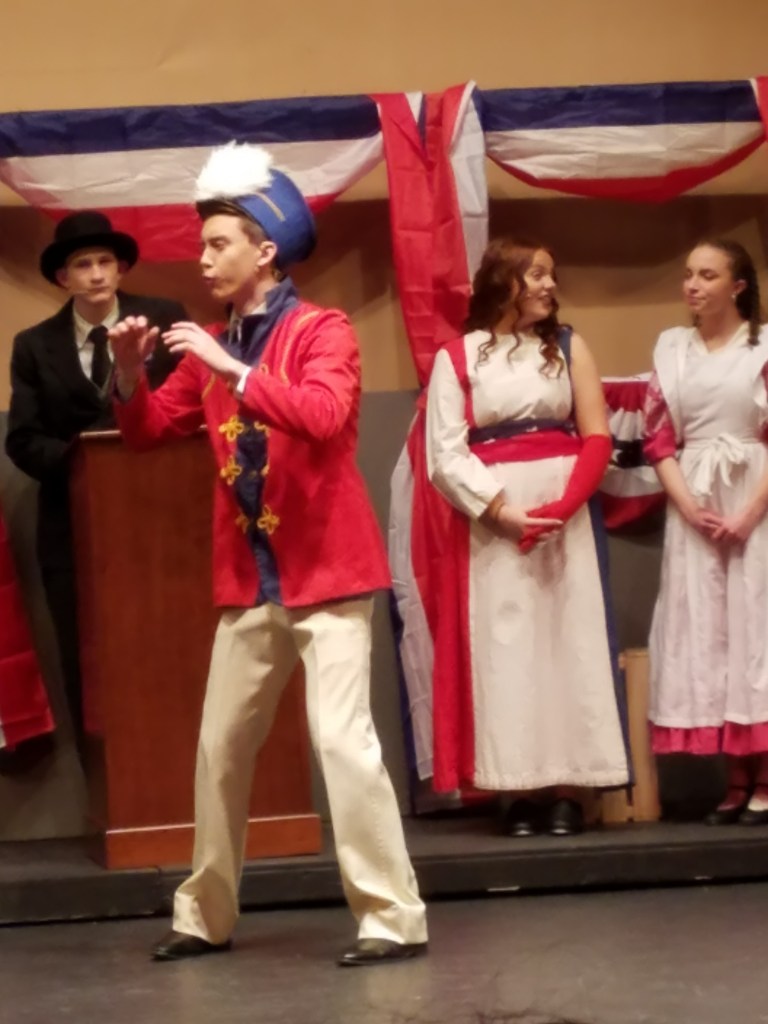 Trevor – who is the youngest of five siblings – started feeling down in March last year, Lisa said, when the rapid spread of coronavirus led to schools shutting down and restrictions being placed on social contact.

Before Covid hit, Lisa says Trevor was an extrovert who thrived on being around people and who loved nothing more than playing sports.

The talented teen was a member of his school’s cross country, track and pole vaulting teams. He also played the trombone, was a drum major in a marching band and was his class’ president at Seneca High School.

So when the state of Illinois introduced strict lockdown measures aimed at stamping out coronavirus, the restrictions ‘hit Trevor hard’, Lisa said.

Amateur sports were stopped and schools down leaving Trevor feeling ‘lost and upset’.

‘School was his life, he made school a better place’, said Lisa.

‘He was a model student and he was very popular. He was a very kind boy and he had an infectious personality. 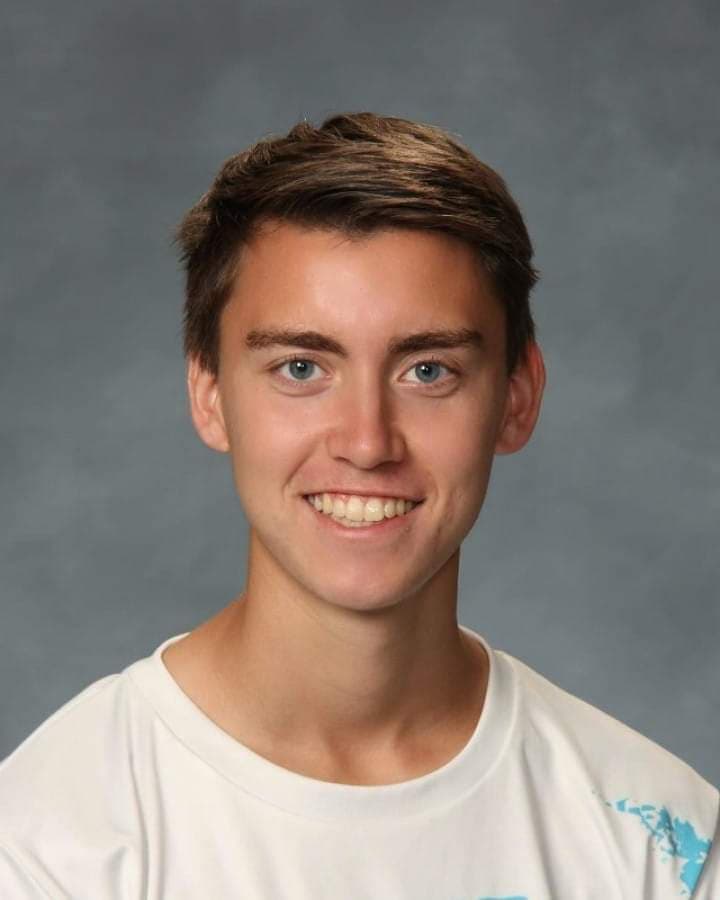 ‘He loved being around people, so when the school’s shutdown in March he felt lost.

‘School was his life and he missed everyone, he missed his friends. He did not like the Zoom classes and he was really sad that he couldn’t take part in his senior year sports in the summer.’

Trevor moved into his dorm at the University of Illinois in August, hoping for better times ahead and looking forward to getting involved with college sports and activities.

But as cases of Covid continued to surge through fall, college sports were canceled and almost all learning was transfered to Zoom.

Lisa said it ‘broke her heart’ to know that Trevor was alone in his room so much and whilst she said she knew he was unhappy, she had no idea how bad her son really felt.

Lisa added: ‘The devastation was just awful, living now is very difficult. There is the guilt, the feeling of guilt. 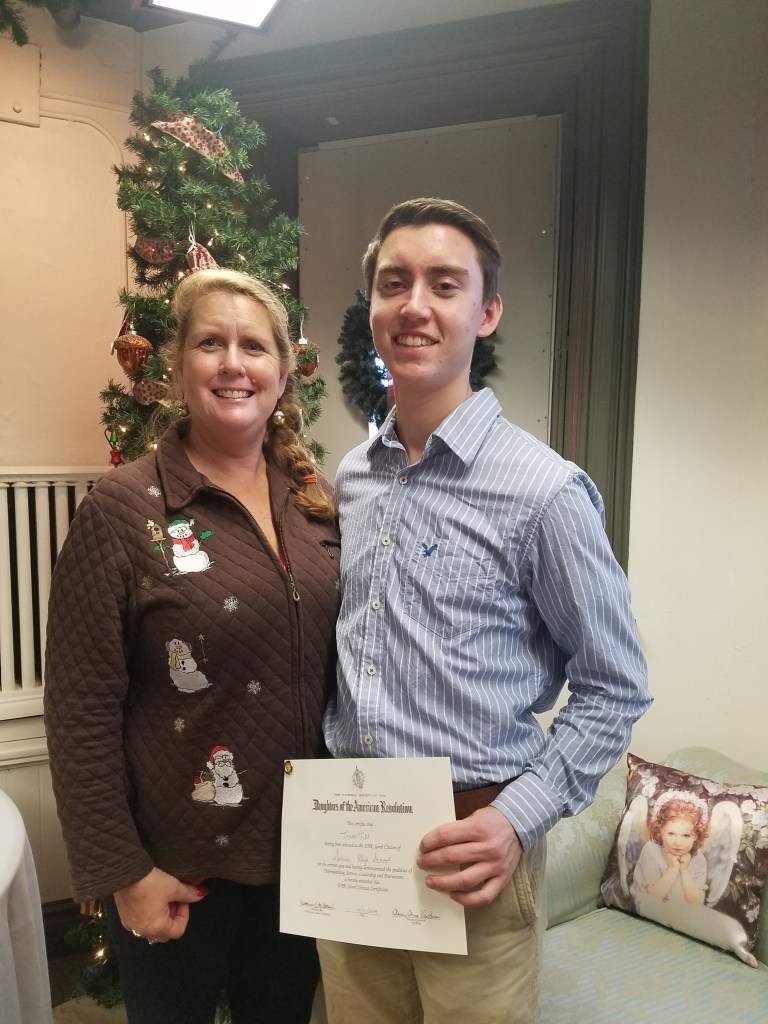 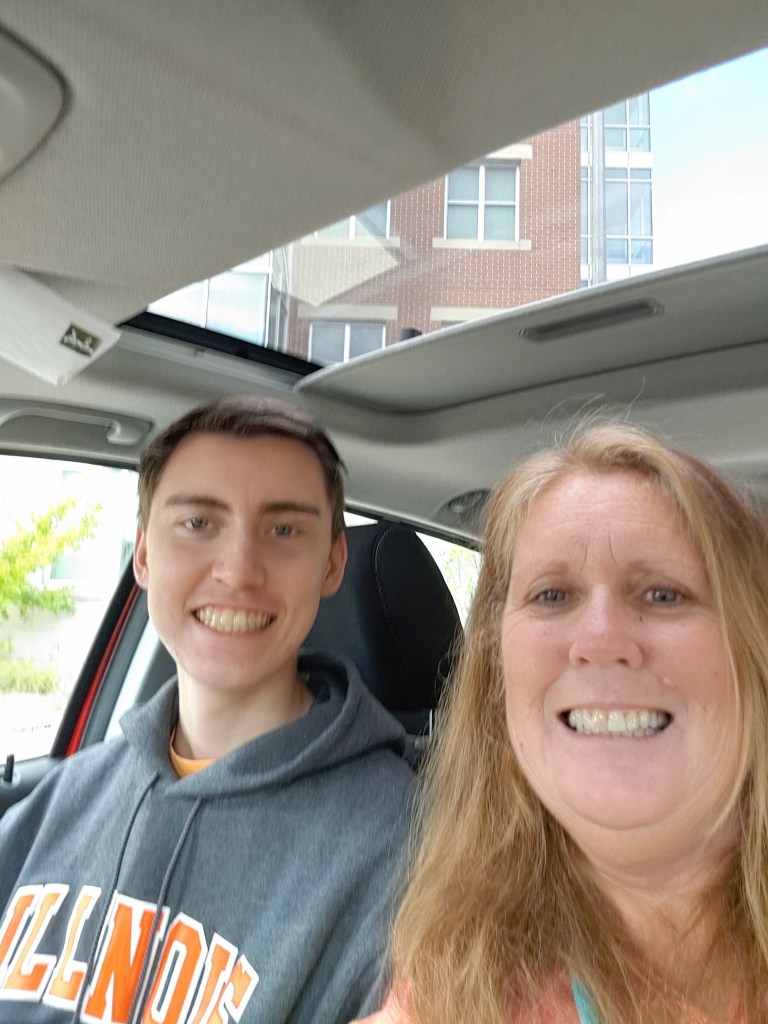 Lisa said she was the last person to speak to Trevor (Picture: Lisa Moore/metro.co.uk)

‘I don’t wish this upon anybody. He was so full of life and so loving, this is the last thing I expected to happen.

‘I don’t want any other parents to ever have to go through what I have.’

Lisa has joined five other parents to sue Illinois Governor JB Pritzker, as well as the Illinois High School Association over rules they blame for Trevor’s death.

The parents’ lawsuit alleges that Pritzker violated Illinois’s equal protection laws by allowing professional and college sports to continue, but not school sports. They say that discrepancy was unfair and unlawful.

Experts have warned that Covid shutdowns are creating a tidal wave of mental health issues, particularly among young people.

Clark County in Nevada – which includes the city of Las Vegas – has rushed to reopen its school buildings after student suicides doubled in 2020.

Lisa went on to urge other parents to continue to support their children throughout the rest of the pandemic. She hopes Trevor’s story can help to raise awareness over the dangers and risks of loneliness for younger people.

Lisa said: ‘Keep a very close eye on your children. I would tell parents to helicopter the hell out of your kids.

‘Find them something to do. There are safe ways for them to see each other.

‘We thrive on human interaction and we need to be around people. It’s horrific what we’re going through and our kids need support too.’

For more information, support and advice on suicide prevention visit the US National Suicide Prevention Lifeline or call 800-273-8255.

You can also text TALK to 741741 or visit SpeakingOfSuicide.com/resources for additional information.