Two weather patterns have the potential to ‘wreak havoc’ across parts of the Midwest and Northeast next week (Picture: AccuWeather)

Forecasters are warning Americans to brace for a significant storm that has the potential to disrupt Thanksgiving travel plans for many in parts of the Midwest and Northeast.

After a year of abnormal holiday celebrations no thanks to the coronavirus pandemic, Americans may miss out on seeing their loved ones a second consecutive year.

Two major weather patterns have the potential to ‘wreak havoc’ across parts of the Midwest and Northeast during the busiest days of holiday travel, forecasters at AccuWeather say.

A wintry storm is expected to develop in the Midwest on Sunday, strengthening daily. By the time it nears the East Coast on Tuesday, a second storm will likely be developing off the Atlantic Coast. 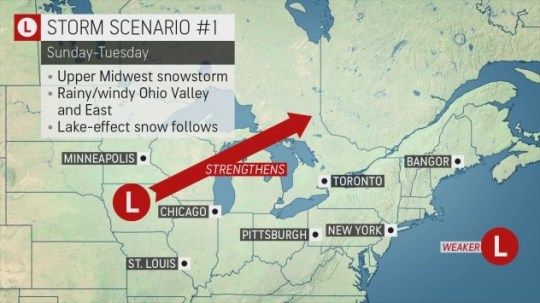 The first storm is expected to develop in the Midwest, and will strengthen daily (Picture: AccuWeather)

‘We could be looking at a huge mess and a real wrench in holiday travel,’ AccuWeather’s Chief Meteorologist Jon Porter said.

The first storm will begin in the Midwest before traveling northeastward toward the Great Lakes. As it moves, it’s likely to strengthen rapidly enough to be classified as a bomb cyclone.

Given this potential route, the storm may drop a heavy layer of snow across portions of Minnesota, northern Wisconsin, northern Michigan and central Ontario and Quebec, Canada.

As the storm strengthens, it will prompt high winds and temperatures to drop. It may also cause lake-effect snow and snow squalls. 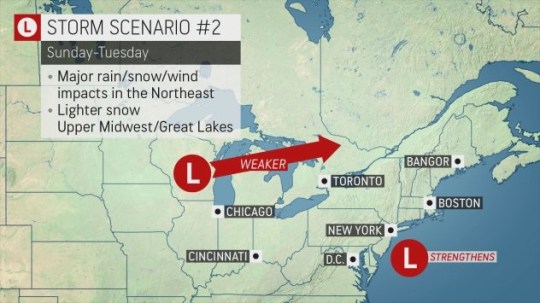 Regardless of the storm’s path, forecasters warn of lake-effect snow and slippery travel conditions (Picture: AccuWeather)

Heavy snow is expected to fall from Monday to Wednesday from northern Indiana and Michigan to parts of Ohio, West Virginia, Pennsylvania, Maryland and New York.

Though the storm will be centered in the Midwest, its cold front will sweep across the southern states, into the Appalachian mountains and Eastern Seaboard early next week, triggering heavy rain and thunderstorms.

The heavy rain could lead to flooding and disrupt travel on the I-95 corridor.

AccuWeather forecasters warn that rainfall may not be the only form of precipitation causing disruption next week.

‘There is a chance that several inches to a foot or more of snow will fall on areas from northeastern New York state, near and north of Albany, New York, to Vermont and northwestern New Hampshire in this rapidly strengthening secondary storm scenario,’ AccuWeather Meteorologist Bernie Rayo said.

While there is a possibility that the secondary storm may be weaker and head out to sea, it is still likely to bring rain early next week.

In either scenario though, forecasters warn of lake-effect snow and slippery travel for the interior Northeast on Tuesday into Wednesday, which has the potential to compound airport operational challenges that have recently plagued the industry.

Forecasters say people with flexible holiday plans may want to consider starting their Thanksgiving travels earlier, even over the weekend.