The Hunga Tonga Hunga Ha’apai volcano exploded in spectacular fashion near the Pacific nation of Tonga on Saturday (Picture: AFP)

Tsunami warnings are in place for several South Pacific countries and the whole US west coast after the eruption of a giant underwater volcano on Saturday.

The Hunga Tonga Hunga Ha’apai volcano exploded in spectacular fashion near the Pacific nation of Tonga on Saturday, sending large tsunami waves crashing across the shore and people rushing to higher ground.

Tsunami advisories have now been issued in many coastal areas, including New Zealand’s North Island, the south of Japan and Canada’s British Columbia.

In the US, the National Weather Service (NWS) said tsunami advisories remained in effect in the whole of the west coast from California to Alaska

Tsunami advisories mean strong currents and waves are expected, but a major tsunami event is unlikely.

Tsunami waves of 1.2 metres have already been recorded on one Japanese island today, while waves as high as three metres (9.84 feet) were expected in the Amami islands in the south.

In a briefing, a Japan Meteorological Agency official urged people not to go near the sea until the tsunami warnings – the first in more than five years – had been lifted.

People in the US were similarly urged to stay away from the shore.

The first waves to hit the country were measured at about one foot in Nikolski, Atka and Adak, Alaska.

In Hawaii, the Pacific Tsunami Warning Centre reported waves slamming ashore, from a foot high in Nawiliwili, Kauai, to two and a half feet in Hanalei. 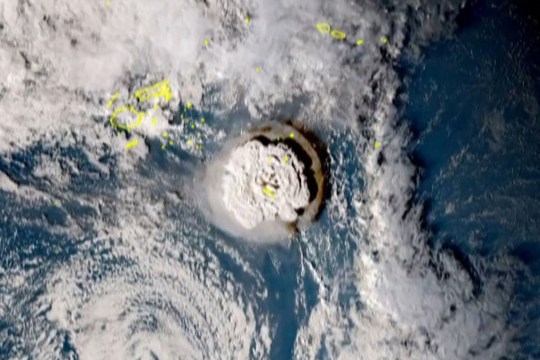 Satellite footage shows the scale of the eruption (Picture: AFP)

Officials in California even closed some beaches and piers due to the high waves.

Los Angeles county officials issued an advisory for residents to ‘move out of the water, off the beach’ and to stay away from the shore until it is declared safe, the LA Times reported.

Fiji also issued a tsunami warning, urging residents to avoid the shorelines ‘due to strong currents and dangerous waves.

Jese Tuisinu, a reporter at Fiji One, posted a video on Twitter showing large waves washing ashore with people trying to flee from the oncoming waves in their cars.

‘It is literally dark in parts of Tonga and people are rushing to safety following the eruption,’ he said.

The eruption in Tonga was heard across the South Pacific, and eventually as far away as the US.

Tonga’s King Tupou VI was evacuated from the Royal Palace after the tsunami flooded the capital. Local media reported that a convoy of police and troops rushed the monarch to a villa at Mata Ki Eua.

Many parts of the island nation are now covered in ash and experiencing a near-total blackout of power, phone lines and internet services.

There were no reports of injuries and the extent of the damage is still unclear as communications with the country remained cut off hours after the eruption.

Prof Shane Cronin, a volcanologist at the University of Auckland, said the eruption was one of the biggest in Tonga in the past 30 years.

The scale of the eruption was also captured by satellite images showing a plume of ash, steam and gas rising like a mushroom above the blue Pacific waters. 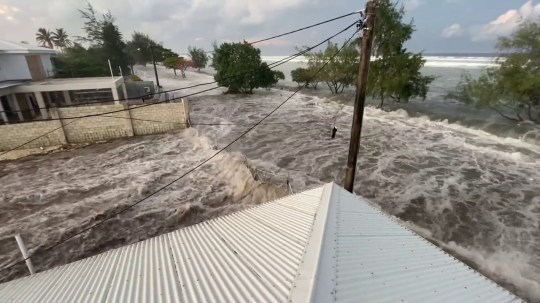 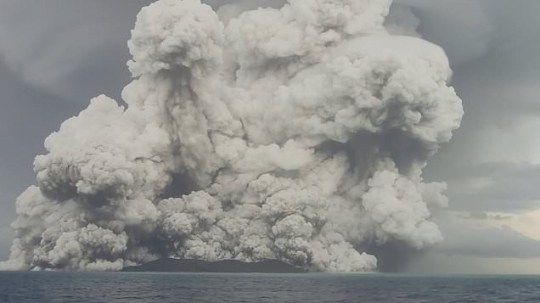 Data from the Pacific tsunami centre showed waves of two and a half feet had been detected.

Satellite images showed a three-mile plume rising into the air to about 12 miles.

More than 1,400 miles away in New Zealand, officials were warning of storm surges from the eruption.

The National Emergency Management Agency said some parts of New Zealand could expect ‘strong and unusual currents and unpredictable surges at the shore following a large volcanic eruption’.

The military said it was monitoring the situation and remained on standby, ready to assist if asked.

A tsunami warning has been issued for parts of Australia’s east coast and Tasmania. 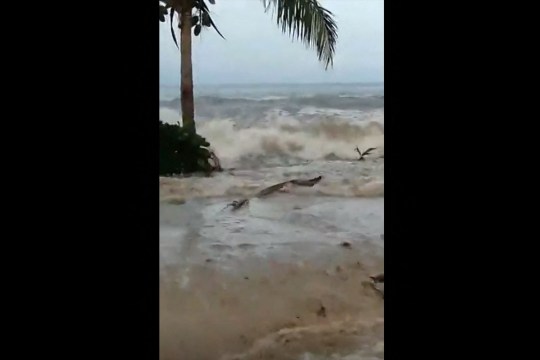 The explosion of the Hunga Tonga Hunga Ha’apai volcano was the latest in a series of spectacular eruptions.

In late 2014 and early 2015, a series of eruptions in the area created a small new island and disrupted international air travel to the Pacific archipelago for several days. 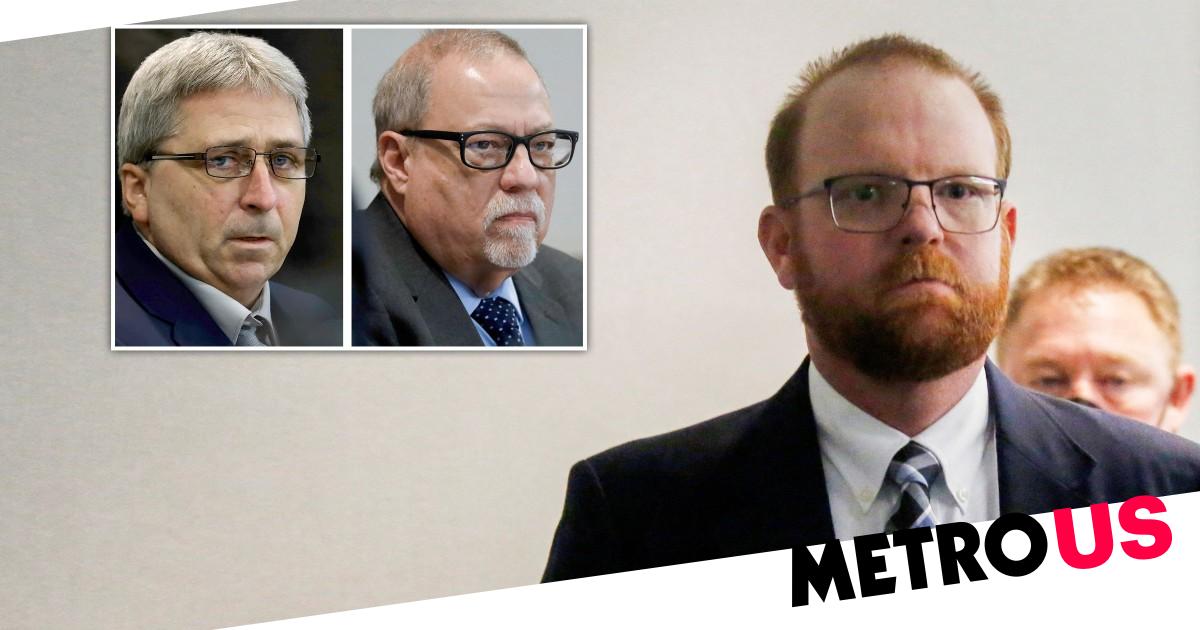 Man gets second life sentence in murder of Ahmaud Arbery

Travis McMichael sentenced to life in prison for federal hate crimes in killing of Ahmaud Arbery (Picture: Reuters)The man who...

Pregnant mother, baby boy and 4 others killed in crash caused by ‘drunk nurse’