Unemployed son resents parents for giving him $100K and ‘spoiling’ him 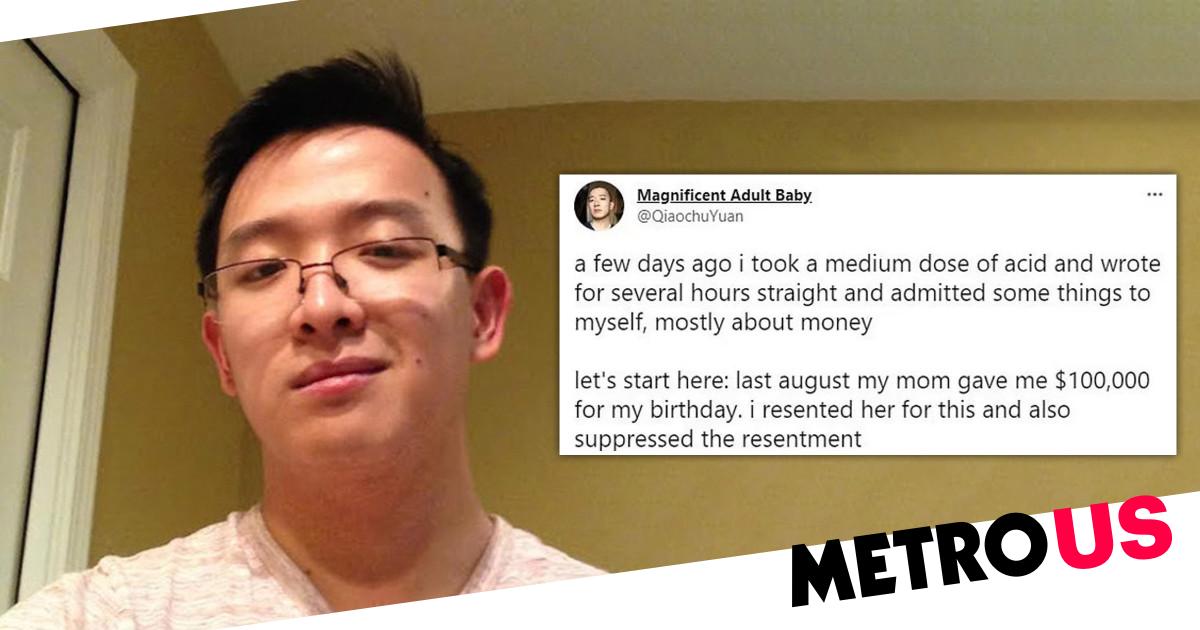 Qiaochu Yuan in a 35-tweet thread said he resented his parents for spoiling him including paying for his college tuition and not making him do any chores (Picture: Qiaochu Yuan/Soundcloud/Twitter)

A man who has been unemployed for three years expressed resentment toward his parents for giving him tens of thousands of dollars, paying for his college tuition and spoiling him. Qiaochu Yuan in a 35-tweet thread said he had taken a ‘medium dose of acid’ a few days before and explained his life situation.

Yuan on Thursday tweeted that he ‘admitted some things’ to himself that were ‘mostly about money’.

‘Let’s start here: last august my mom gave me $100,000 for my birthday. i resented her for this and also suppressed the resentment,’ wrote Yuan, whose Twitter name is Magnificent Adult Baby.

Yuan said he wrote for possibly 12 straight hours while on the acid trip and that he found himself in a dialogue between his sober self and his being on the psychedelic drug.

‘The reason you’re alive right now and not starving to death on the street even though you haven’t had a job in three years is because your parents send you money because they love you,’ Yuan tweeted.

He later shared he had an epiphany that he was ‘literally Harry f****** Potter’.

‘I’m always being protected by my parents’ love in the form of money,’ Yuan said.

The son continued that running out of money had the biggest consequence of having to explain it to his parents, who had already shelled out $175,000 ‘because they wanted me to have a good education and a good life’.

Yuan’s parents paid for his entire tuition at the Massachusetts Institute of Technology.

The son admitted that he was tweeting ‘from a position of privilege’ and then blamed his parents for taking care of him financially instead of in other ways.

‘My parents took care of me materially at the expense of taking care of me emotionally,’ Yuan tweeted. ‘It took me until this trip to even kinda experience the money they spent as an act of care.’

Yuan said he understood why his parents did what they did, but complained about being ‘incredibly sheltered in a bunch of ways’.

‘They never even made me do chores. I was very spoiled, and in retrospect, it wasn’t good for me,’ he said.

Yuan wrapped up by saying that his father told him he was ‘holding off on retiring because he was worried’ about him.

Many Twitter users slammed Yuan and called him ungrateful or spoiled.

‘Your father is putting off retirement because he thinks he’ll need to keep subsidizing your lifestyle in chunks of tens of thousands of dollars. Let that sink in,’ Twitter user @streamgazer wrote.

Another Twitter user, @gsusswept, wrote: ‘Millions of people live the same way. It’s terrifying and exhausting, and if someone gave me 1/100 of what you got for FREE I would shower them in gratitude.’

Meanwhile, Twitter user @whothef_ckiscam wrote that Yuan’s thread ‘was a really hard read’ and that $100,000 is ‘what my income would add up to after almost a decade’.