The US House of Representatives passed the most significant gun control legislation in decades on Friday, sending the measure off to President Joe Biden, who is expected to sign it into law.

The bill passed the House 234-193, with 14 Republicans voting with all of the Democrats in support of the measure.

The bipartisan gun legislation came to be after recent mass shootings in Buffalo, New York and Uvalde, Texas, and shockingly made it quickly through Congress. The bill passed the Senate late Thursday in a 65-33 vote after 15 Republicans strayed from their party.

The legislation will enhance background checks for those under the age of 21 looking to buy a gun, and require authorities to check juvenile records, including mental health records beginning at age 16.

It also will give grants to states to improve ‘red flag’ laws, which allow guns to be taken away from people deemed too dangerous to have them. It also will close the ‘boyfriend loophole’ by keeping guns away from non-spouse dating partners convicted of abuse.

While many of the House Republicans vote against the measure on Friday, about a dozen moderate members supported the legislation. 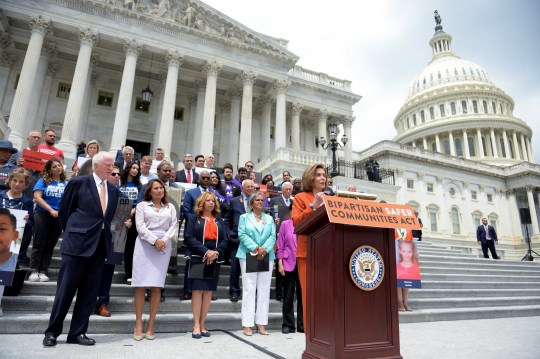 Representative Tony Gonzalez, a Republican who represents Uvalde, where a gunman killed 19 children and two teachers at an elementary school last month, spoke openly ahead of the vote in support of the measure.

Some of the Republicans opposed to the measure felt it infringed upon Second Amendment rights, according to the House Minority Whip Steve Scalise, a Republican from Louisiana.

After pleading with lawmakers to take action following the two latest mass shootings, Biden was enthusiastic about the bill moving through Congress.

‘I am glad to see Congress has moved significantly closer to finally doing something — passing bipartisan legislation that will help protect Americans,’ he said.

The president continued: ‘Our kids in schools and our communities will be safer because of this legislation. I call on Congress to finish the job and get this bill to my desk.’

The sweeping bipartisan piece of legislation comes a day after the US Supreme Court struck down a New York law limiting guns in public, ultimately ruling that the Second Amendment protests the right to carry firearms outside one’s home.

The 6-3 ruling took a broader interpretation of the Second Amendment, which protects the right for Americans to keep and bear arms. This ruling will make it more difficult for states to restrict carrying guns outside of one’s home.

This is a breaking news story, check back for updates…