US military members ‘will be required get Covid vaccine’ by September

Defense Secretary Lloyd Austin speaks at a press briefing at the Pentagon in Washington, saying the Covid-19 vaccine is mandatory for military personnel (Picture: AP)

The Pentagon has reportedly announced that all members of the US military are required to get the Covid-19 vaccine by September 15.

The deadline can be changed based on the FDA approval or infection rates continues to rise, according to a memo obtained by the Associated Press.

‘I will seek the president’s approval to make the vaccines mandatory no later than mid-September, or immediately upon’ licensure by the Food and Drug Administration, ‘whichever comes first’, Defense Secretary Lloyd Austin stated in the memo to troops, warning them to prepare for the requirement.

Following President Joe Biden’s lead to develop a plan to troops to be included in a his federal workforce vaccinated mandate, Austin decided that it was time to broaden the president’s message in increase vaccination efforts.

In the next few weeks, Austin will unveil an official memo of how many vaccines soldiers will need and how will this mandate will work. 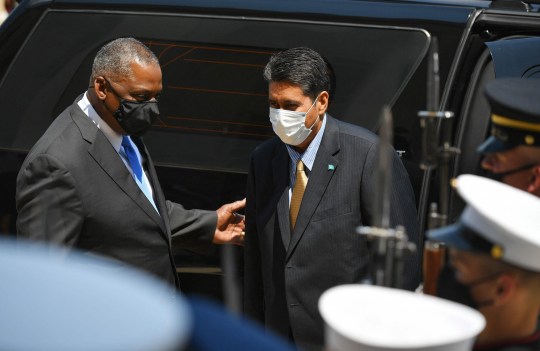 The FDA had gave its final approval of the Pfizer vaccine which was last month, which Austin needs Biden to make it mandatory shots.

Currently, the troops are at risk of getting Covid-19 because they often live and work closely together in barracks and on ships.

An outbreak of the virus in the military could affect America’s ability to defend itself in any national security in cases of emergencies.

Service members can be get vaccines all over the world, meaning as 17 difference can be tried.