A galactic smashup might explain galaxies without dark matter

Two mysterious galaxies, devoid of dark matter, could have a smashing origin story.

About 8 billion years ago, researchers propose, two dwarf galaxies slammed into one another. That cosmic crash caused the gas within those two galaxies to split up and form multiple new dwarf galaxies, including the two dark matter–free ones.

A newfound row of dwarf galaxies, more than 6 million light-years long, could have formed in the aftermath of the hypothesized crash, researchers report in the May 19 Nature. If correct, the finding could help solve the mystery of how such unusual dark matter–free galaxies form, and reveal new details about the nature of dark matter.

But other scientists are skeptical that there’s enough evidence to support this backstory. “If this is true, I think it would be really exciting. I just don’t think the bar has been met,” says astronomer Michelle Collins of the University of Surrey in Guildford, England.

In 2018, Yale University astronomer Pieter van Dokkum and colleagues reported a dwarf galaxy with no dark matter (SN: 3/28/18). The invisible, mysterious substance is typically detectable in galaxies via its gravitational effects on stars. When a second dark matter–free dwarf galaxy was found in the vicinity in 2019, it raised an obvious question: How did the two oddball galaxies form? Dark matter is generally thought to form the foundation of all galaxies, gravitationally attracting the gas that eventually forms stars. So some process must have separated the dark matter from the galaxies’ gas.

Scientists have previously seen dark matter and normal matter separate on a very large scale in the Bullet Cluster, which formed when two clusters of galaxies rammed into one another (SN: 8/23/06). Other researchers had proposed that something similar might happen with colliding dwarf galaxies, what van Dokkum and colleagues call “bullet dwarfs.”

In such a collision, the dwarf galaxies’ ethereal dark matter would continue on unperturbed, because the dark matter doesn’t interact with other matter. But the gas from the two galaxies would slam together, eventually forming multiple clumps that would each become its own galaxy, free of dark matter.

Now, van Dokkum and colleagues say that the bullet dwarf idea explains the two previously reported dark matter–free galaxies — and several other galaxies nearby. The two galaxies are moving away from each other as if they had come from the same spot, the researchers say. What’s more, the two galaxies are part of a chain of 11 galaxies aligned in a row, a structure that could have formed in the aftermath of a bullet dwarf collision. 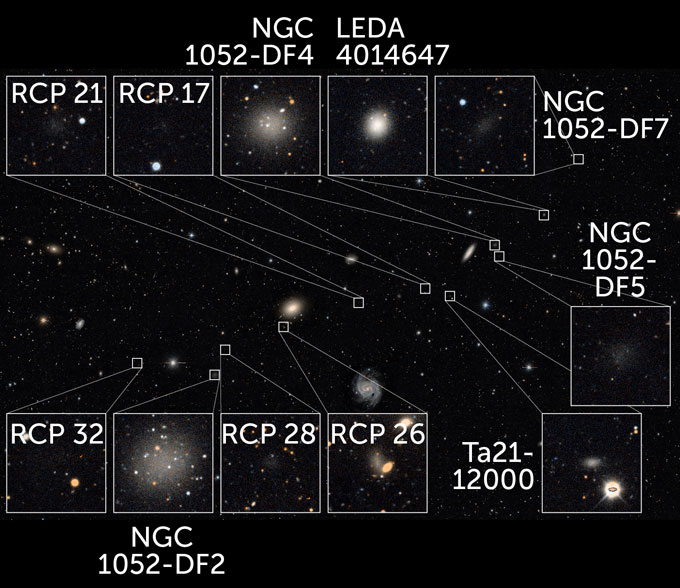 “It’s super satisfying to finally have an explanation for these weird objects,” van Dokkum says.

But, Collins says, “there could be much more done to make it convincing.” For example, she says, the scientists didn’t measure the distances of all the galaxies from Earth. That means some of the galaxies could be much farther away than others, and it could be a coincidence that the galaxies appear to be lined up from our viewpoint.

And the researchers haven’t yet measured the velocities of all the galaxies in the trail or determined whether those galaxies are also missing their dark matter, which would help confirm whether the scenario is correct.

Computer simulations performed by Shin, Kim and others have shown that bullet dwarfs can produce such dark matter–free galaxies. If confirmed, the bullet dwarf idea could help pin down dark matter’s properties, in particular whether dark matter interacts with itself (SN: 4/5/18).

Van Dokkum and colleagues are planning additional measurements that could confirm or refute the case. But so far, he says, “It has, to me, the ring of truth.”

Monkeypox is not a global health emergency for now, WHO says

Monkeypox is not yet a global public health emergency, the World Health Organization said June 25. The decision comes as...

5 misunderstandings of pregnancy biology that cloud the abortion debate

This giant bacterium is the largest one found yet

Vampire squid are gentle blobs. But this ancestor was a fierce hunter