Wiggles and wobbles and a powerful pull toward people — that’s what 8-week-old puppies are made of.

From an early age, dogs outpace wolves at engaging with and interpreting cues from humans, even if the dogs have had less exposure to people, researchers report online July 12 in Current Biology. The result suggests that domestication has reworked dogs’ brains to make the pooches innately drawn to people — and perhaps to intuit human gestures.

Compared with human-raised wolf pups, dog puppies that had limited exposure to people were still 30 times as likely to approach a strange human, and five times as likely to approach a familiar person. “I think that is by far the clearest result in the paper, and is powerful and meaningful,” says Clive Wynne, a canine behavioral scientist at Arizona State University in Tempe who was not involved in the study.

Wolf pups are naturally less entranced by people than dogs are. “When I walked into the [wolf] pen for the first time, they would all just run into the corner and hide,” says Hannah Salomons, an evolutionary anthropologist studying dog cognition at Duke University. Over time, Salomons says, most came to ignore her, “acting like I was a piece of furniture.”

But dogs can’t seem to resist humans’ allure (SN: 7/19/17). They respond much more readily to people, following where a person points, for example. That ability may seem simple, but it’s a skill even chimpanzees — humans’ close relatives — don’t show. Human babies don’t learn how to do it until near their first birthday. When wolves have been put to the task, the results have been mixed, suggesting that wolves need explicit training to learn the skill. Scientists haven’t been sure if dogs’ ability is learned or, after at least 14,000 years of domestication, has become innate (SN: 1/7/21).

To find out, Salomons and colleagues showered attention on wolf pups, while restricting dog puppies’ access to people. Days after birth, 37 wolves got round-the-clock human attention. Caregivers even slept amid a pile of wolf pups on outdoor mattresses. Meanwhile, 44 retriever puppies stayed with their mothers and littermates until they were 8 weeks old, with only brief visits from people. 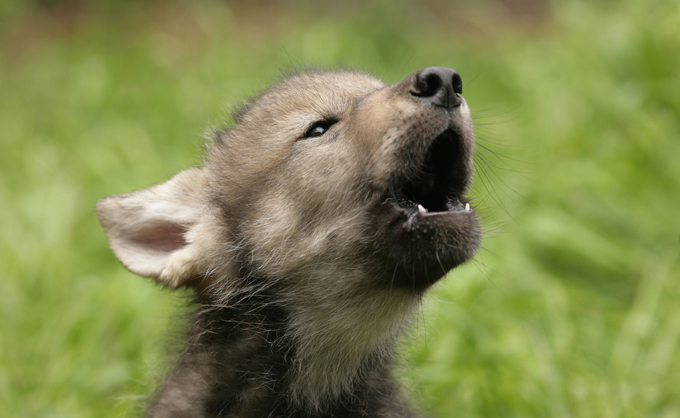 People raised wolf puppies (one shown) at the Wildlife Science Center in Stacy, Minn., for a new study on domestication. The pups received round-the-clock attention, including sleeping with human caregivers on outdoor mattresses.Roberta Ryan

The researchers then exposed both types of puppies to familiar and unfamiliar people and objects. Puppies’ memories were tested by hiding treats in their view. A cylinder with food inside — solvable only by going around to an open end, but tempting to gnaw on the middle —challenged puppies’ self-control. To observe puppies’ response to human gestures, researchers pointed at hidden treats or placed a small wooden block next to a hiding spot to draw the eye.

Wolves and dogs were evenly matched in memory and self-control, the researchers found. But in tasks involving human communication, dogs surpassed wolves. Dogs were twice as likely to follow a pointed finger or a wooden block as a clue. Dogs also made twice as much eye contact, meeting humans’ gaze in four-second bursts compared with wolf pups’ average of 1.47 seconds.

Dogs intuit human gestures from a young age, Salomons and colleagues conclude, lending support for the idea that domestication has wired dogs’ brains for communicating with humans. Dogs “are born with this readiness to understand that a person would be trying to communicate with them,” Salomons says. “Wolves didn’t have that tendency. It wouldn’t really occur to them that a person would be trying to help them.”

Domestication’s effects on dogs’ brains may be more emotional than cognitive, Wynne says. Though the researchers tested only wolves willing to approach people, “it doesn’t strike me as surprising” that dogs explore objects near humans more often, he says. “I think that is most likely to do with the fact that dogs are just generally happier getting close to a person.”

One thing is clear: Domestication has molded dogs into people-seeking missiles, drawn to humans from the start. The dog pen is all licks, wiggles and eye contact, Salomons says, nothing at all like a cage full of disinterested wolf pups.

Footprints left behind by prehistoric people may be some of the strongest evidence yet that humans arrived in the Americas...

Why Hasn’t Elon Musk Been to Space Yet?

DNA offers a new look at how Polynesia was settled