THE large hole in the ozone layer above Antarctica has grown so big it’s about the same size as the continent.

The hole reached one of its greatest and deepest recored sizes this year and a video released by the European Space Agency has revealed its magnitude. 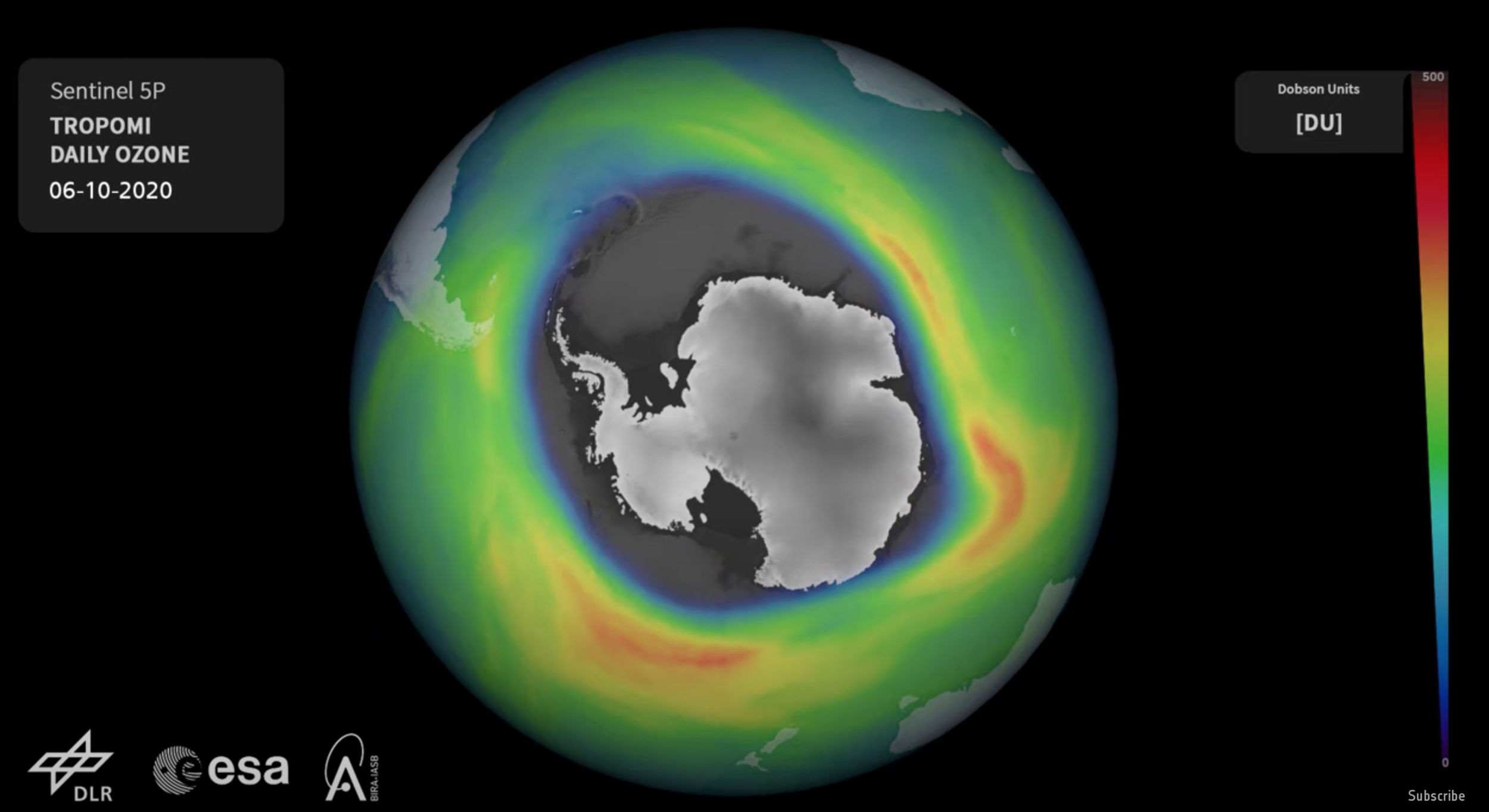 The ozone hole over Antartica at its peak in 2020Credit: ESA / YouTube

The ESA explained alongside the video: “The animation shows the size of the ozone hole from 25 September 2020 until 18 October 2020.

“Measurements from the Copernicus Sentinel-5P satellite show that this year’s ozone hole over the Antarctic is one of the largest in recent years.

“A detailed analyses from the German Aerospace Center indicates that the hole has now reached its maximum size.”

The ozone layer is an important layer surrounding Earth that shield’s us from the Sun’s ultraviolet radiation. 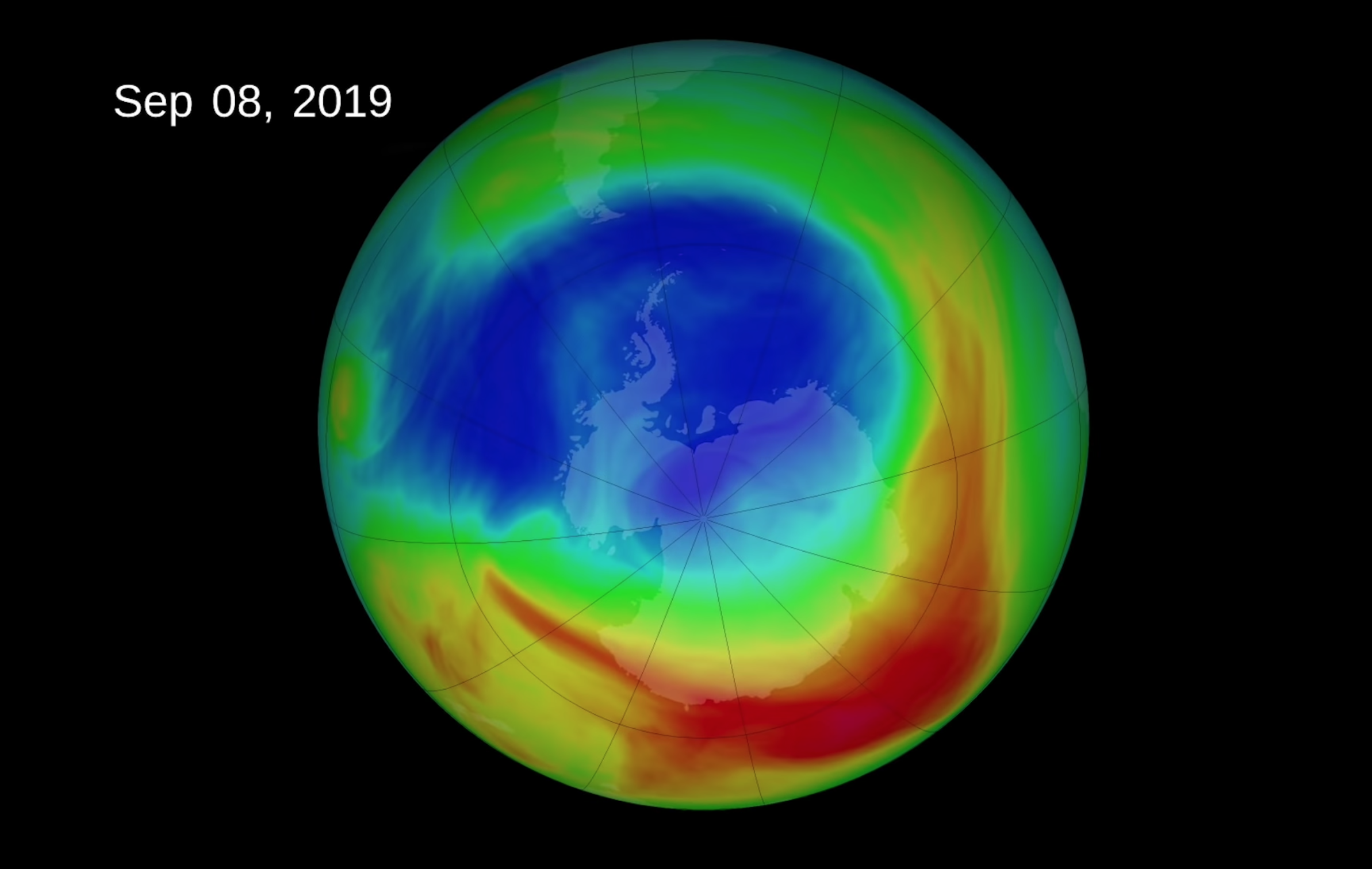 The ozone hole in 2019 was smallerCredit: NASA Goddard/ Katy Mersmann

Ozone itself is actually a molecule that is floating in the atmosphere and is grouped together in the layer.

The less ozone in our stratosphere, the more susceptible humans could become to things like skin cancer, cataracts and weak immune systems, according to Nasa.

Vincent-Henri Peuch, Director of Copernicus Atmosphere Monitoring Service at ECMWF, said: “There is much variability in how far ozone hole events develop each year.

“The 2020 ozone hole resembles the one from 2018, which also was a quite large hole, and is definitely in the upper part of the pack of the last 15 years or so.

“With the sunlight returning to the South Pole in the last weeks, we saw continued ozone depletion over the area.

“After the unusually small and short-lived ozone hole in 2019, which was driven by special meteorological conditions, we are registering a rather large one again this year, which confirms that we need to continue enforcing the Montreal Protocol banning emissions of ozone depleting chemicals.”

The size of the ozone hole does fluctuate throughout the year due many factors, including temperature, but always reaches a peak size.

The Montreal Protocol is an international treaty that was put in place in 1989 that aimed to phase out harmful manmade ozone destroying chemicals that could be found in things like refrigerators and sprays.

The halt in use of these chemicals is thought to be helping the ozone hole problem but this year’s measurements highlight how more could be done.

The largest hole size recorded was actually 29.9 million square kilometre back in 2000.

Strong polar winds and unusually stratospheric temperatures have thought to have been a set back for ozone hole progress this year.

In other news, the past decade has seen the Atlantic Ocean see its hottest temperatures in almost three thousand years.

An unprecedented ‘mega-tsunami’ could be caused by a melting Alaska glacier, scientists have warned.

And, whales, dolphins and porpoises are facing ‘imminent’ extinction, according to over 350 experts.

Are you worried about the hole in the ozone? Let us know in the comments…