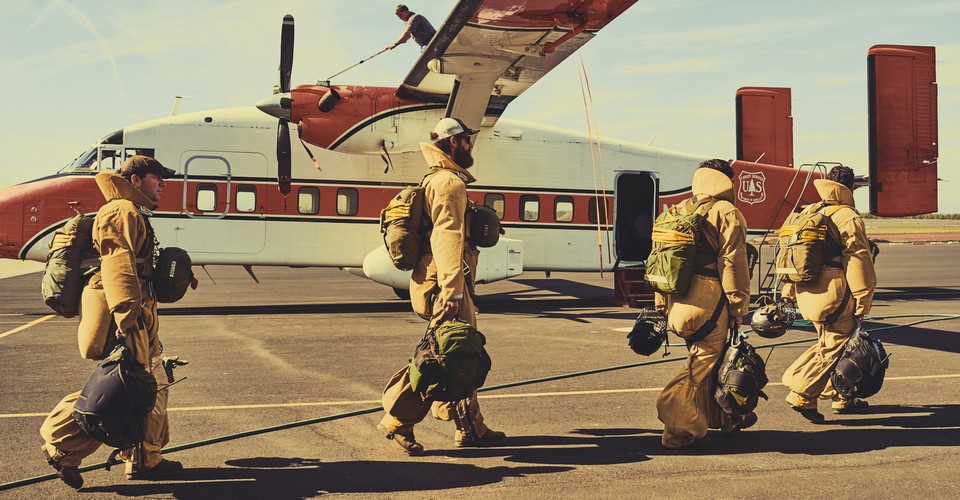 During fire season at the National Interagency Fire Center, a complex of buildings housing the top level of support for U.S. wildfire response, the coordination center looks about how you might expect. It features, most prominently, a massive digital clock and a projector screen filled with maps of fire risk and weather forecasts. But unless you’re well versed in wildfire suppression, a sight in the nearby loft might come as something of a surprise. There, a rugged smoke jumper might be hunched over a sewing machine, gently guiding layers of fabric beneath the staccato rhythm of a presser foot.

Smoke jumpers are among the elite of wildland firefighters, selected after years of experience to take on the responsibility of parachuting as close to a fire as they can. But one of the first things many rookie smoke jumpers learn, after how to jump out of a plane and pack their own parachute, is how to sew.

“We have to repair the parachutes and we have to manufacture all the gear,” Ken Perry, who for eight years served as a smoke jumper with the Bureau of Land Management in Alaska, told me. I’d reached out to Perry and other smoke jumpers because a quick tour of the NIFC years ago had piqued my interest in wildland-firefighter gear. Even though smoke jumpers face giant blazes that can char whole landscapes and create their own weather, their gear is so unfussy—clothes not that dissimilar from those of a well-outfitted outdoorsy person, and tools vaguely familiar to anyone with a toolshed—it seems impossible that they’re not more ornately equipped.

Some of their gear is manufactured. The flame-resistant pants and shirts, you can buy online. They’re typically made from a material called Nomex, the same stuff that race-car drivers wear in the cockpit. It will burn if you hold a flame to it but, unlike a cotton T-shirt, will stop burning when the flame is removed.

Other items, including the thick, padded jumpsuits that smoke jumpers wear when parachuting out of a plane, they have to make themselves. They fashion the suits out of a thinner version of Kevlar, the same stuff used to make bulletproof vests. Kevlar is fire-resistant, an added layer of protection in case “you’re in a plane crash or something,” Perry said. (Smoke jumpers do not jump out of airplanes into wildfires, as many people believe. They jump out of airplanes close to wildfires. The idea is to reach a remote fire as quickly as possible.)

The puncture resistance helps too. “So if you land in trees, you’re not going to get a stick poking through like you might with just a cotton-type fabric,” Perry said.

Read: The battle of High Hill

Trees, according to Sarah Berns, who was a smoke jumper with the Forest Service out of Grangeville, Idaho, are among the scariest parts of smoke jumping. Jumpers do their best to avoid them, but if you land in a tree, the branches can collapse a parachute, leaving you free-falling 20, 30, 40 feet or more—better to use the chute to cover the entire crown of the tree. Then the jumpsuit’s many pockets come in handy; at least one will hold ropes designed to lower a person safely. The suit’s Elvis-like collars are similarly designed for safety—they protect a jumper’s neck. For extra protection, smoke jumpers also wear helmets and body armor borrowed, depending on the jumper, from the worlds of motocross or hockey.

I asked Berns to walk me through everything a smoke jumper has on their body besides clothes when they jump, and the list was extensive: the parachute; a reserve parachute; the parachuting harness; a gear bag, which they also make, and which dangles between the jumper’s legs and converts into a backpack once they’re on the fire line; another helmet that jumpers wear when they are actually on the fire to protect them from falling objects; the previously mentioned let-down rope, tucked into a pocket. Sometimes, they might also tuck in a frozen steak.

“By the time it’s dinnertime, it’s thawed out, and you’re usually pretty hungry for it,” Berns said.

Along with the occasional steak, in a large pocket on the jumpsuit’s pant leg is a pack-out bag that the jumpers make themselves. It’s a long, tubular backpack, roughly the size of a small human. When the fire is out, all of the gear the jumper brought with them, including whatever else—chainsaws, food—was parachuted down separately, goes into the pack-out bag. They then hike out carrying their bag, a trek that can take days.

“The packs that you carry off of a fire are, on average, roughly 110 pounds, give or take. But you know, since that’s the average … if you’re carrying the chainsaw out, you’re easily looking at closer to 115, 120,” said Berns, who once hiked out from a fire after breaking her pelvis. “My pack was very heavy—always.”

One tool that goes in the pack is the Pulaski, a wildland-firefighting mainstay. It’s a hand tool, like a hatchet, that has an ax on one side of the head and a hoe on the other. Firefighters use it to dig a fire line, a swath of cleared land roughly 10, 20, 30 feet wide that is nothing but dirt.

“You’re removing all the vegetative material from that path in an attempt to prevent the fire from having anything to burn,” Berns said. “So if a fire was creeping on the ground—it’s creeping through some dry grass—and then all of a sudden it gets to your fire line, it has nothing left to burn.”

“That is totally firefighting in a nutshell,” she said laughing. “You’re fighting a very powerful element of Mother Nature with a Pulaski and dirt, basically.”

And this has essentially been true for a century. The Pulaski dates back to the early 1900s, when a U.S. Forest Service ranger named Ed Pulaski saved the lives of 40 of the 45 men on his firefighting crew during an extreme wildfire known as the Big Burn or the Big Blowup. More than 3 million acres burned over two days across northern Idaho, western Montana, and parts of eastern Washington and southeast British Columbia. The fire led Ed to create the tool that bears his name, and the Forest Service to adopt a fire-suppression policy that fire scientists now recognize has led to even worse wildfires.

For decades after the Big Burn, the Forest Service’s official policy was to suppress all fires. To get to remote fires, the service began dropping firefighters into the backcountry, even before the military had adopted the use of airborne troops. Typically, wildfire crews try to contain fires, in effect  creating a perimeter to keep the fire in check until it burns itself out, rains come along, or both. Smoke jumpers, in contrast, are usually sent out to attack small fires before they blow up—when it’s possible to actually extinguish them.

These days, even as experts recognize the benefit of letting smaller fires burn in order to clear out brush, grasses, and shrubs that can power bigger, more powerful fires, smoke jumpers are still used. Ideally, their work would be limited to fires that, if left unabated, had a greater chance of cascading into more catastrophic fires, but for practical and political reasons, that isn’t always the case.

In recent years, fires have been getting so intense or spreading so rapidly that they are hard to control, with alarming effects. The 2018 Mendocino Complex Fire was the largest in California history, until the 2020 August Complex Fire replaced it at the top spot. Experts don’t like it when people fixate on the size of a fire, because it can create the impression that all fires are bad and pressure firefighters to suppress fires that should be left to burn. It also makes it harder for land managers to prevent out-of-control fires by setting smaller, controlled ones. But most everyone agrees that a mix of bad fire-suppression policies in the past and climate change are creating tinderbox conditions.

Wildland firefighters, including smoke jumpers, are right in the thick of that, and their gear is not the only thing they’re left to take care of themselves. Not until 2012 were wildland firefighters finally granted the option to buy federal health insurance. But because they are hired on as temporary workers, when the season ends they lose their health-insurance subsidy, a problem for a profession that brings with it long-term health risks. In June, President Joe Biden pledged to keep federal firefighters on duty for a longer season and increase their pay, but that worries Perry.

“The fires are more dangerous now. They’re bigger. There’s more people dying in them. All of that adds up. And if you don’t give people a break, they’re going to burn out,” he said. “And paying them more doesn’t fix it.”

In the past few years, a historic shift has occurred in American public opinion: For the first time ever, and...

This barnacle species can slide around its turtle hosts

Earth is reflecting less light. It’s not clear if that’s a trend