Tyson Bottenus once captained an 80-foot schooner called the Aquidneck. He sailed tourists off the coast of Newport, R.I., discussing the area’s history and sites. In January 2018, he had finished another season at the schooner’s helm and had recently gotten engaged to his partner of many years, Liza Burkin. To celebrate, the couple, avid cyclists who’ve ridden through New Zealand and Japan, set off for a bike tour of Costa Rica.

“We were on this very, very dusty road for a long time,” Bottenus remembers of a ride to Montezuma on the Nicoya Peninsula. “It was a dirty, sandy, hard-packed road.” While going downhill, Bottenus crashed, badly scraping his elbow. The next morning, a doctor spent about an hour picking out little rocks and cleaning dirt from the wound before she bandaged it up. The injury kept him from swimming but otherwise didn’t disrupt the trip.

About a month after returning to Rhode Island, Bottenus started having headaches. He couldn’t control his mouth properly — his speech was off, and he was drooling. Eventually his doctor ordered an MRI, which revealed a lesion in his brain. “My first thought was, I must have some sort of cancer,” he says. “I’m only 31…. I’m way too young for this.”

It wasn’t cancer. Nor was it any of the infections proposed as doctors searched for a diagnosis. Two brain biopsies didn’t provide enough tissue to identify the problem.

In August 2018, Bottenus became very ill and was hospitalized. He couldn’t walk. His mouth muscles weren’t working. And he could no longer tie the drawstring of his pants with a square knot, a common knot sailors use to fasten two ropes together. It’s a knot Bottenus has taught others and could previously do with his eyes closed. “I’m a captain of boats, supposedly,” he remembers thinking. “I am not the person I think I am.”

Finally, a third brain biopsy, taking a slightly larger amount of tissue, yielded a diagnosis: Bottenus had a fungus growing in his brain. It was a black mold called Cladophialophora bantiana that can breach the blood-brain barrier. The best medical guess is that Bottenus was exposed in Costa Rica — probably from the dusty air he inhaled, or maybe from the debris-laden wound on his elbow.

People are exposed to fungi all the time, and usually we get along just fine. Fungi are in the air, in the soil and in us, part of the community of microbes that live in our bodies. Fungi that inhabit plant roots form crucial partnerships with more than 90 percent of land plant species, helping the plants absorb water and nutrients from the soil in exchange for food. But some fungi are also infectious pathogens that can cause pneumonia, blindness and meningitis.

Doctors believe Bottenus picked up a fungal infection during a 2018 biking trip in Costa Rica. He is shown here after the crash that injured his arm.Courtesy of T. Bottenus

An estimated 2 million people globally die from fungal diseases each year. And pathogenic fungi tend to harm those with the least means. Fungal keratitis, an infection of the cornea, strikes more than a million people annually, estimates suggest, and blinds around 600,000. Found in tropical and subtropical areas, the disease — usually treatable when diagnosed early — often impacts young, poor agricultural workers. Another example, chronic pulmonary aspergillosis, is a lung infection that commonly occurs in people already burdened with lung damage from tuberculosis.

Fungal infections are also a threat to people with HIV, a virus that weakens the immune system. When defenses are down, typically benign fungi can take advantage of the gaps in our immunological armor and cause an infection. In resource-rich areas, fungal infections have decreased with earlier HIV diagnosis and the availability of antiretroviral drugs. But in places where people can’t get early, consistent HIV care, fungal infections have stubbornly persisted as dangerous complications of HIV and AIDS.

Advances in modern medicine that have extended lives have also led to more fungal infections. Organ transplantation and treatments for cancer and autoimmune diseases have created a large population of people who regularly take drugs that inhibit components of the immune system, leaving these patients susceptible to fungal invaders.

Some fungi have emerged as recent threats to human health. First reported in Japan in 2009 as the cause of an ear infection, a yeast called Candida auris unexpectedly caused outbreaks of invasive infections — those that reach the blood, spinal fluid or other typically sterile areas of the body — on three continents a few years later. Hospital patients are especially at risk from the yeast, which is resistant to certain antifungal drugs.

Scientists have proposed that the emergence of C. auris as a danger to people may be tied to our warming climate, with the yeast gaining temperature tolerance in the environment. That could explain why C. auris can replicate inside human bodies, a niche that’s usually too hot for many fungi.

The warming climate may make other fungal pathogens more widespread. Coccidioides, a fungus that shape-shifts from a soil-dwelling, fluffy mold to aerosolized spores to round, parasitic cells at the site of infection, causes a disease called valley fever. Someone who breathes in the spores might not have symptoms at all or could become fatigued, short of breath and develop a fever, cough and night sweats. It’s among the fungal pathogens that can strike healthy immune systems. In the United States in 2019, 18,407 cases were reported to the U.S. Centers for Disease Control and Prevention.

Coccidioides is primarily found in southwestern states, but global warming could change that. “The entire western United States has been identified as potential habitat,” says medical mycologist Bridget Marie Barker of Northern Arizona University in Flagstaff. The fungi thrive in hot, dry environments where there are brief, heavy rains. Climate change is expected to make western states hotter and alter precipitation patterns. Research reported in GeoHealth in 2019 predicts that by 2100, the areas impacted by Coccidioides could expand north in the western half of the country and annual cases could increase by 50 percent.

Despite the heavy burden of fungal diseases and the potential for that burden to grow, there are no approved vaccines against fungi, and the medicine cabinet of fungal remedies is not deep. There are only a few types of antifungal drugs. It’s difficult to develop antifungals in part because fungi are eukaryotes. Like us, and unlike bacteria, their cells have distinct, membrane-bound compartments, including a nucleus that holds their genetic material. That shared biology means that if a drug can kill fungi, it might harm us too.

The antifungals that do exist “are not spectacular,” says pediatric infectious disease physician and medical mycologist Damian Krysan of the University of Iowa Carver College of Medicine in Iowa City. Even with treatment, invasive fungal infections are difficult to survive. For example, an invasive infection with the mold Aspergillus has a mortality rate ranging from 40 to 90 percent in patients with weakened immune systems, depending on where the infection is, among other factors. For a cancer patient with a great prognosis who develops an Aspergillus infection, Krysan says, “you can be cured of your cancer and die of your fungal infection.”

Even diagnosing a fungal infection is challenging. For one, there are fewer diagnostic tests specific to fungi than there are for viruses and bacteria. Another problem is that the symptoms of a fungal infection can resemble those caused by other pathogens. And fungi grow slowly, so it takes longer to confirm that a blood or tissue sample is infected with a fungus. A delayed diagnosis can mean delayed treatment, which complicates the chances of recovery.

Into this uncertain medical terrain landed Bottenus, a previously healthy young man who acquired an exceedingly rare fungal infection in his brain. 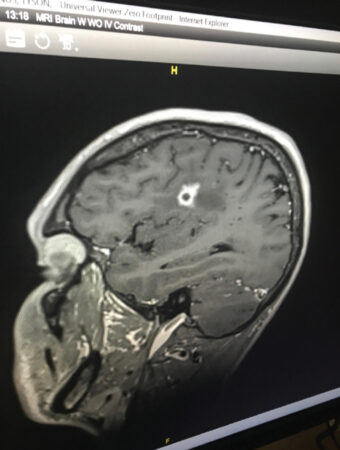 This 2018 image of Tyson Bottenus’ brain shows a lesion (white spot) that was later diagnosed as an infection with a fungus called Cladophialophora bantiana.Courtesy of T. Bottenus

Bottenus has been treated with antifungal drugs and steroids. It’s been a “vicious cycle,” says Robbie Goldstein, an infectious disease physician at Massachusetts General Hospital who has been part of Bottenus’ team of doctors. The steroids reduce the inflammation from the infection, which puts dangerous pressure on Bottenus’ brain. But the steroids also suppress his immune system, impairing his ability to clear the fungus. When doctors have tried to taper the steroids, the inflammation in Bottenus’ brain has gotten worse.

As the COVID-19 pandemic began, Bottenus became nervous that being immunocompromised put him at greater risk of getting sick from the coronavirus. So he stopped taking the steroids. The resulting inflammation triggered a stroke at the end of March 2020. In the several weeks he spent in the hospital, pandemic restrictions prevented Burkin from visiting.

Bottenus is still coping with the effects of the brain infection and the stroke. He has lost most of his peripheral vision. His speech is altered. Navigation is a struggle — he has a hard time finding his way around, even in his home. Bottenus kept telling himself that he’d wake up one day and be back to where he used to be. “But of course that’s a fantasy,” he says.

Yet other brain functions don’t seem to have been harmed. Bottenus began graduate school in the fall of 2020 and has done well in his classes. “He can’t really bike across our neighborhood by himself,” Burkin says, “but he can write a 20-page research paper.”

The whole experience has changed Bottenus’ personality, Burkin says. Her adventurous partner has become reliant on structure and routine. “I think that’s really normal for people who’ve gone through a life-threatening disease, where you have no control,” she says. Bottenus says, living “is as much adventure as I can get.”

In the published cases of C. bantiana infections, the death rate can be as high as 70 percent. Many times, the infection isn’t diagnosed until a patient’s autopsy, Goldstein says. For those who live with this infection, he says, the studies “don’t say what that life is like.” Bottenus and Burkin are crossing uncharted medical territory.

For now, Bottenus is a passenger on friends’ boats. When he bikes, he follows Burkin, or they ride a tandem. He makes sure to have his cell phone when he goes out, in case he gets lost. “He used to literally be able to do celestial navigation and lead us on bike tours across continents,” Burkin says. “I don’t know that it is permanent, these changes. I don’t think there’s any way to know.” 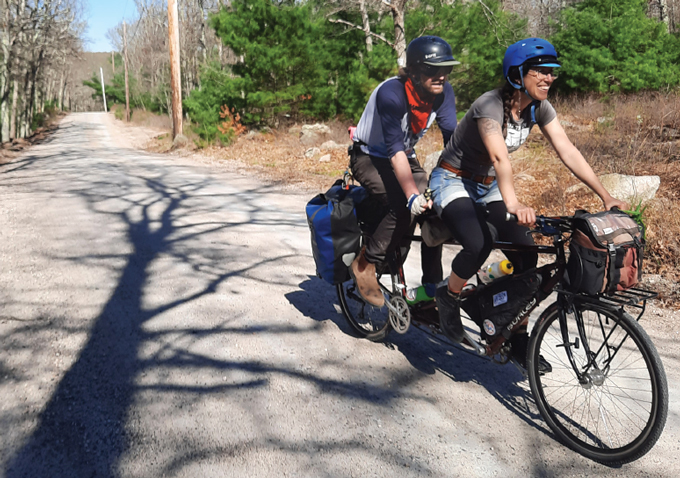 Tyson Bottenus and his partner, Liza Burkin, an urban planner, ride their tandem bike in the spring of 2021. Bottenus’ infection with a rare fungus is “the universe being purely chaotic,” Burkin says.Courtesy of T. Bottenus

But “I can’t blame this fungus,” she says. “We were out on a bike ride and some dirt got into his body.”

Sometimes a doctor meets a patient after they’ve already been seriously harmed by an infection, Goldstein says. But he got to know Bottenus from the beginning, when the young sailor was searching for a diagnosis. Goldstein says this experience has made him really aware, when he’s talking to a patient, of how devastating an infection can be to the life they had before.

“Before there was an infection,” he says, “there was a person.”