For years, sociologist ChangHwan Kim has sought to characterize the lives and experiences of Asian Americans. Gatekeepers in the research community, though, have often scoffed at his focus on a demographic group that looks like the picture of success in terms of education, earnings, health and other variables (SN: 4/14/21).

“In my experience, if I have a study with only Asian Americans, journals are reluctant to publish that work,” says Kim, of the University of Kansas in Lawrence.

An apparent lack of interest in studying Asian Americans isn’t limited to sociology; it even appears in medical research. At about 23 million people, Asian Americans represent about 7 percent of the U.S. population and are the fastest-growing demographic group in the country. Yet just 0.17 percent of the National Institutes of Health’s roughly $451 billion research funding between 1992 and 2018 went to clinical studies that included a focus on Asian Americans, researchers reported in 2019 in JAMA Network Open.

Over the last year, politicians’ use of racial epithets, such as “China virus” and “kung flu”, to refer to COVID-19, alongside a surge in violence against Asian Americans, has thrust this population into the media spotlight. This attention is “a new phenomenon,” Kim says. That media gaze has showcased just how little is known about Asian Americans and, consequently, how to best meet the population’s needs.

Asian Americans’ invisibility in public and scientific discourse stems from the majority-minority paradigm, Kim says. This sociological paradigm frames white Americans, the majority, as better off than minority groups across several metrics, including educational outcomes, wages and family stability. So studies of minorities often focus on issues related to marginalization and inequality.  Asian Americans do not appear to fit the paradigm.

Because of their apparent success, Asian Americans are often excluded from research, lumped together with white people or placed in the catchall category “other.”

But studying success is itself important, says sociologist Arthur Sakamoto of Texas A&M University in College Station. For instance, researchers study both struggling and successful white Americans to understand the full range of outcomes within the group, he says. Yet, with minority groups, researchers largely focus on those who are struggling, thereby excluding Asian Americans. “If you really want to understand the ultimate nature of social problems, you also have to study the contrast,” Sakamoto says. “You can’t just study one end of the distribution.”

And though their education levels and earnings are on par or even higher than white Americans, Asian Americans are underrepresented in managerial and supervisory positions. Researchers refer to this as a “bamboo ceiling.”

Even when Asian Americans are studied, researchers rarely break down this extremely heterogeneous group into individual populations. Members hail from at least 19 countries, each with different cultures and languages, and no one population dominates. Thus, treating Asian Americans as a monolithic group can hide struggling subgroups. The overall Asian American poverty rate is 10 percent, for example, but jumps to 25 percent for Mongolian and Burmese populations, according to an April report from the nonpartisan Pew Research Center.

Gaps in the data

The datasets researchers use to study U.S. demographic groups reflect this long-standing disinterest in studying Asian Americans, Kim says. Few surveys rope in enough Asian Americans to study subgroups within the category in detail. That’s true he says even of the U.S. Census Bureau’s annual surveys, which provide snapshots of demographic and labor trends.

Community psychologist Nellie Tran ran into that problem several years ago. As a graduate student, she wanted to understand the educational outcomes of U.S.-born Asian Americans and scoured the scientific literature. “I only came up with 45 articles in history,” says Tran, now at San Diego State University.

Most of those articles relied on a single dataset, the National Educational Longitudinal Study of 1988, which ran from 1988 to 2000 and followed individuals from eighth grade to young adulthood. Sociologists “were studying many different questions off one group of students,” Tran says. That group wasn’t even relevant to Tran’s work, as the Asian Americans in the survey were predominantly foreign-born.

Kim and other researchers have developed work-arounds to overcome those gaps. Studying well-educated Asian Americans is feasible, for instance, thanks to the National Survey of College Graduates. That survey, conducted by the Census Bureau, takes place every two to three years and tracks outcomes for U.S. bachelor’s degree holders.  Because of their strong presence in higher education and white-collar jobs, Asian Americans are well-represented in this survey. The survey also includes data on where first-generation Asian Americans originated. “That means you can actually divide Asian Americans by ethnic group. So for well-educated Asian Americans, we have a dataset,” Kim says.

Kim’s research using that data has revealed inequalities even among this select group. College-educated Asian American men born in the United States earn 8 percent less than white men with the same level of education and college major, Kim and Sakamoto reported in 2010 in American Sociological Review. Similarly, Asian American women are less likely to reach managerial positions than white women with the same qualifications, Kim noted in 2014 in Social Forces. For both men and women, these disadvantages are evident across most Asian ethnic groups.

Similar datasets do not exist for less-educated Asian Americans. For example, six of the eight victims in the Atlanta mass shooting in March were Asian American women and probably blue-collar workers, Kim says. Blue-collar Asian Americans are the most invisible members of an already invisible group. “We need to know who are they, what they need,” Kim says.  For instance, little is known about what access such workers have to relevant social programs or if those programs are culturally appropriate.

Recently, Kim and colleagues zoomed in on employment changes brought on by the pandemic. He used short-term census data and looked for changes in individual employment from January to August 2020. When Kim dove into the data, he says he was startled to find that Asian Americans lacking a bachelor’s degree were more likely to have lost their job during the initial lockdown in April and May 2020 than any other demographic group. That finding appeared in the February Research in Social Stratification and Mobility. Kim could not break the data down further to see which Asian American ethnic groups suffered the most. 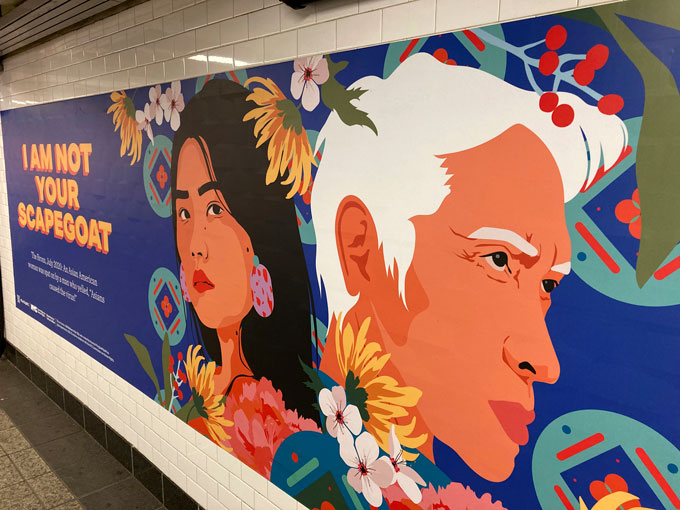 An anti-racism poster in the subway in Brooklyn, N.Y., aims to counter a wave of violence against Asian Americans in the wake of COVID-19’s emergence in China. Asian Americans’ emergence from the shadows, however, has highlighted just how little is known about this group’s members or how to protect them from such vitriol.STRF/STAR MAX/IPx

Right now, when he submits studies focused on Asian Americans, he includes a lengthy explanation of the need for such work. He ropes in those statistics showing how fast the Asian American population is growing. And he argues that Asian Americans’ experiences can help elucidate how immigrants assimilate — or not — in the United States. He is particularly interested in understanding how that assimilation process differs by socioeconomic status, gender and country of birth. For instance, how does the life trajectory of a blue-collar Asian immigrant differ from that of a U.S.-born, white-collar third-generation Asian American?

WE all know Stephen Hawking as a scientific genius but a new Sky documentary has taken a more personal look...