How the Manchin Climate Bill Will Slash Carbon Emissions

First we got the bill. Now we have the numbers.

The Inflation Reduction Act, the surprise deal that Senator Joe Manchin and Senate Majority Leader Chuck Schumer struck last week, would significantly reduce greenhouse-gas pollution from the American economy. If passed, the bill would cut annual emissions by as much as 44 percent by the end of this decade, according to a new set of analyses from three independent research firms.

That would make the Inflation Reduction Act, or IRA, the most significant climate bill ever passed by Congress. No law has ever made such a big dent in U.S. emissions, or cut them as rapidly: It would more than double the pace at which the American economy has been decarbonizing, the analyses say.

“I was skeptical of it when we started doing the modeling,” Anand Gopal, the executive director of strategy at Energy Innovation, a nonpartisan policy group in San Francisco that prepared one of the studies, told me. “But now I’m convinced that this is a really meaningful action by the United States on climate in this decade.”

Two-Thirds of the Way to Paris

The Inflation Reduction Act would cut emissions 41 percent by 2030, compared to their all-time high, according to a new analysis from Princeton researchers. That would get the country two-thirds of the way to meeting its current commitment under the Paris Agreement.

The three new estimates were conducted by Energy Innovation; Rhodium Group, an energy-research firm in New York; and the REPEAT Project, a university-associated team led by Jesse Jenkins, a Princeton engineering professor. The studies represent a new spin on an old approach. Normally, when Congress considers a major piece of legislation, outside economists pore over its details, feeding them into computer models to estimate how each provision might affect GDP, inflation, and the federal budget deficit. Instead, the three groups looked at the bill’s climate effects, sketching what the bill could mean for carbon emissions, clean-energy deployment, and energy costs.

All three analyses reached a broadly similar conclusion, pointing to a roughly 40 percent drop in emissions by the end of the decade.

That sort of decline would place one of President Joe Biden’s biggest climate goals in reach for the first time. When the United States rejoined the Paris Agreement last year, Biden committed to cutting the country’s emissions in half by 2030 compared with their all-time high. That goal is in line with estimates that say carbon pollution from the world’s richest countries must go to zero by 2050 if the world wants to stave off the worst effects of climate change by the end of the century.

The Manchin-Schumer bill wouldn’t get all the way to Biden’s 2030 goal, Jenkins told me. But it would get close enough that states, cities, companies, and the Environmental Protection Agency could get the country over the finish line. And it would also boost America’s clout in international climate negotiations, giving it more credibility to push other countries to rapidly decarbonize. “At the moment, the U.S. has just gone to these [UN climate] forums—or even engaged bilaterally with countries—with very limited credibility,” Gopal said. If the bill passes, “that is going to change.” 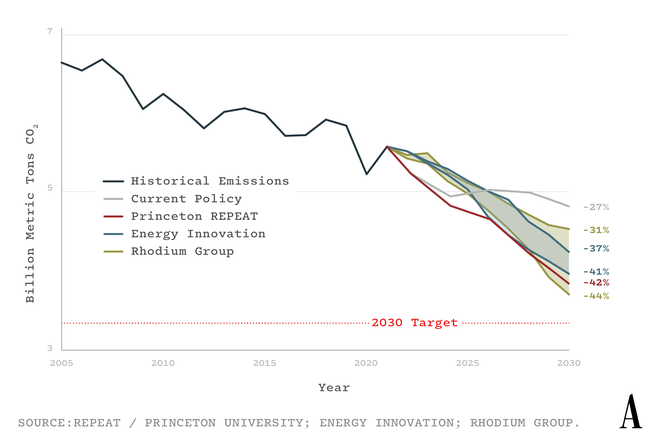 Independent analyses of the climate impact of Inflation Reduction Act arrived at the same finding: If passed, the bill will cut U.S. emissions by about 40 percent compared to their all-time high.

At its core, the bill has one idea that would help accomplish these cuts. “​​The biggest thing is, it makes clean energy cheap. That’s really the bottom line,” Jenkins said. At nearly every point in the energy economy, it aims to lower the cost of clean energy, providing generous subsidies to spur clean-electricity production while creating programs to tackle bottlenecks on deploying that electricity, such as America’s inability to build an interconnected and blackout-proof grid.

But it is worth dividing the policies in the bill into two categories. In the first category are policies that will drive greenhouse-gas pollution out of the economy this decade. The crown jewel of these policies is a new set of tax credits that will apply to any form of zero-carbon power production, subsidizing the cost of new zero-emissions power plants. These new policies replace an older and kludgier regime where every individual electricity-generating technology had to be subsidized separately, which led to a strange, uneven status quo where, for instance, the federal government would subsidize only the opening of a new solar farm, not the production of solar energy.

The bill takes a similar approach in the transportation sector, the most carbon-intensive part of the American economy. The bill subsidizes the cost of new electric cars, SUVs, pickups, and vans by up to $7,500. Together, the power and transportation sectors make up the largest share of emissions cuts in the bill, Jenkins said.

That’s only half of the policies in the bill, though. The second half of policies focuses on reducing emissions after 2030 by developing today the technology that will make that possible. That means it focuses primarily on the industrial sector, which is poised to become the country’s most-polluting sector by the end of the decade. The bill offers a slew of incentives to underwrite new factories, encourage clean-energy manufacturing, and push that sector toward reaching net-zero emissions. If its policies are successful—and they are, for once, funded well enough that they should be—it will turn the United States into a global leader in the nascent geothermal, hydrogen, and carbon-removal industries.

One thing that every modeler agrees on is that their estimates are going to be wrong. Reality will not look like what their projections suggest. Energy-system models as used in these reports do not account for sudden changes in consumer taste or major geopolitical upheavals, such as Russia’s invasion of Ukraine. Nor do they consider that some consumers, for practical or cultural or political reasons, might want to stick with, say, gasoline-powered vehicles, even at lurid personal cost.

But they’re still useful tools for orienting how to think about this bill. Take Rhodium’s forecast, for instance, which projects that the IRA will cut carbon pollution by 31 to 44 percent by 2030. That worst-case scenario, only 31 percent, assumes that virtually everything that could go wrong will, at least short of a world war, Ben King, one of the firm’s analysts, told me. It would require the rapid cost declines for solar, wind, and electric vehicles that we’re seeing right now to stop altogether, he said. Natural-gas prices would have to crash from their current near-record highs to their historic lows, then remain in the doldrums for 15 years straight. Oil prices, too, would have to collapse. “All of those things could happen, but it’s pretty darn unlikely,” King said.

The scenarios also assume that were Congress to pass the IRA, no further entity at any level of the American government would pass any climate policy for a decade. The EPA would have to decline to regulate carbon pollution from power plants or cars and trucks, even though the Biden administration is already beginning to write rules for those sectors. States and cities would have to not pass local climate laws, even though the IRA would make it cheaper to do so.

Which isn’t to say that the U.S. will automatically overshoot the best-case scenarios in these reports. A future Republican president and Congress could weaken the IRA provisions. Nobody knows the future. But it suggests that compared with nothing, passing the IRA will improve the country’s odds of tackling climate change no matter what the future holds.

Earlier this year, Rhodium projected that under current policy, America could cut its emissions 24 to 35 percent by 2030, compared with their all-time high. Now it says that under the IRA, the U.S. can expect emissions cuts of 31 to 44 percent. In other words, even in a (very unlikely) worst-case scenario where the IRA passes and then everything goes wrong, U.S. emissions will be just a few percentage points higher than if nothing had passed and absolutely everything went right.

There is no perfect climate bill, but these reports suggest that the IRA is a pretty good one, and much better than Democrats might have once expected. The analyses show that the IRA clearly and easily meets one of the core requirements of any climate bill: It cuts emissions on net compared with the status quo. In all likelihood, it will leave us significantly better off. Ten years from now, even in a worst-case scenario, the United States will have knocked out much of its emissions from the power and transportation sectors. And the country will have a much better idea of how to eliminate the final 50 or 60 percent of emissions remaining in the economy.

Finally, the results point to one overarching conclusion: Only Congress has the power to decarbonize the economy. With one piece of legislation—a bill that Joe Manchin, whose family owns a coal-trading business, has agreed to, for crying out loud—the legislature can double the pace at which the American economy is cutting emissions. One single, imperfect act could do more for the climate than 30 years of federal, state, and local action combined. Because of the demographic doom that the party is facing, this may be Democrats’ last chance to pass a bill for the next decade or so. This is the country’s best and last opportunity to meet the 2030 goal and, with it, a world where net zero by midcentury is actually possible. But to get there, Congress has to pass the bill.

Sometimes a photo is literally a matter of life, death — and zombies. This haunting image, winner of the 2022...

The Climate Law Might Turn America Into the World’s Factory

Common, cheap ingredients can break down some ‘forever chemicals’

Mosquitoes Are Going to Get Us, No Matter What

Why mosquitoes are especially good at smelling you

Oort cloud comets may spin themselves to death