AN UNPRECEDENTED ‘mega-tsunami’ could be caused by a melting Alaska glacier, scientists have warned.

The concerned experts claim the catastrophic event could even happen within the next 12 months if melting ice triggers a landslide of unstable rocks. 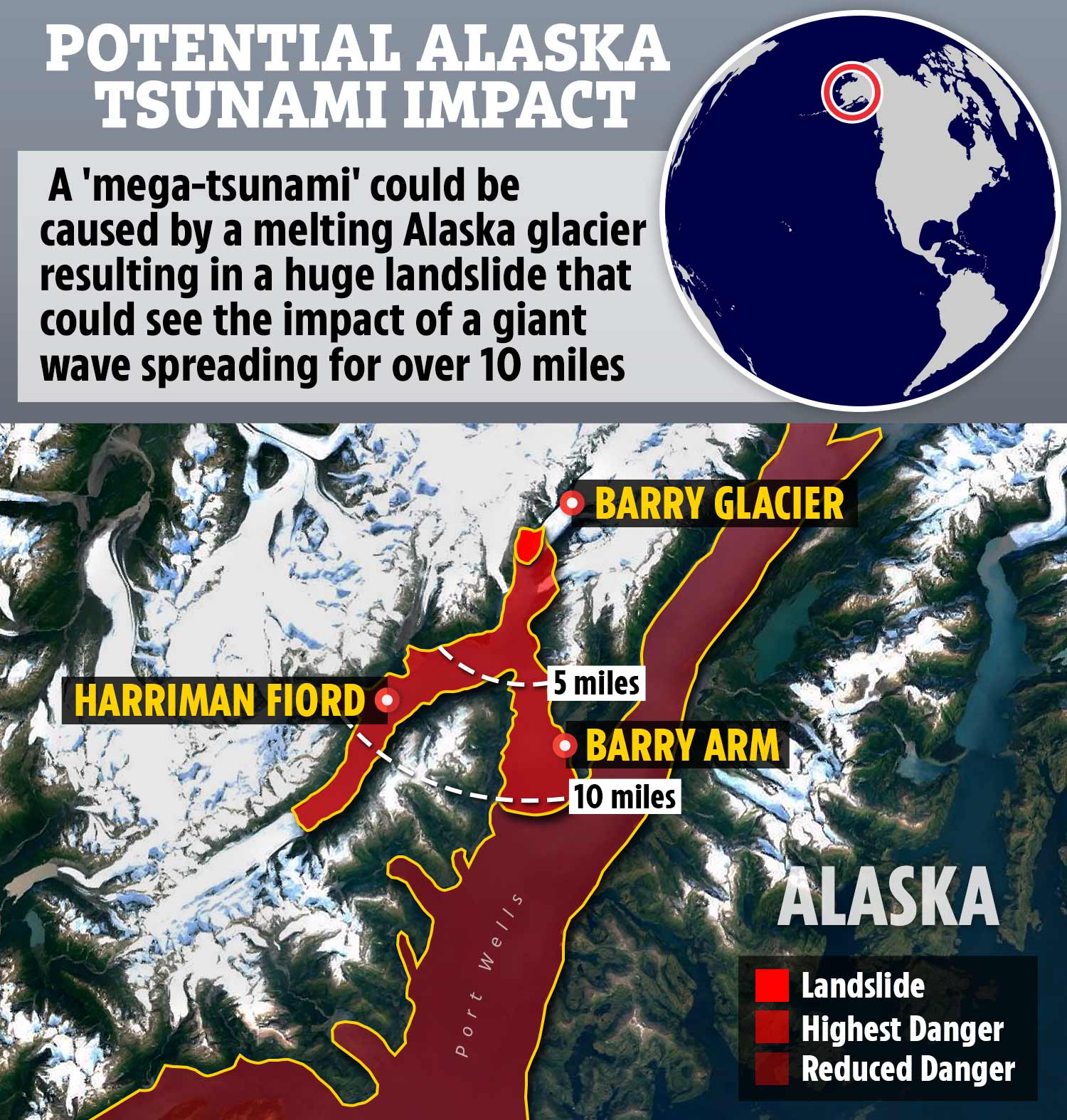 If it’s not that soon, they think the ‘mega-tsunami’ is likely to happen within the next two decades.

The potential disaster was warned about in May by scientists who wrote an open letter to the Alaska Department of Natural Resources (ADNR).

They’re worried about an area called Prince William Sound along the south coast of Alaska in the US.

This region has seen glacier retreat, which has led to instability on the slopes of a mountain in Barry Arm above the Barry Glacier. 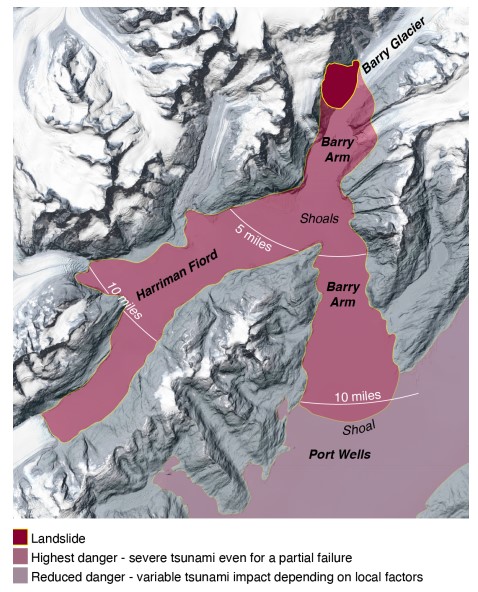 The impact of the predicted tsunami could be felt over 10 miles awayCredit: (Briggs et al., open letter to ADNR, May 2020) 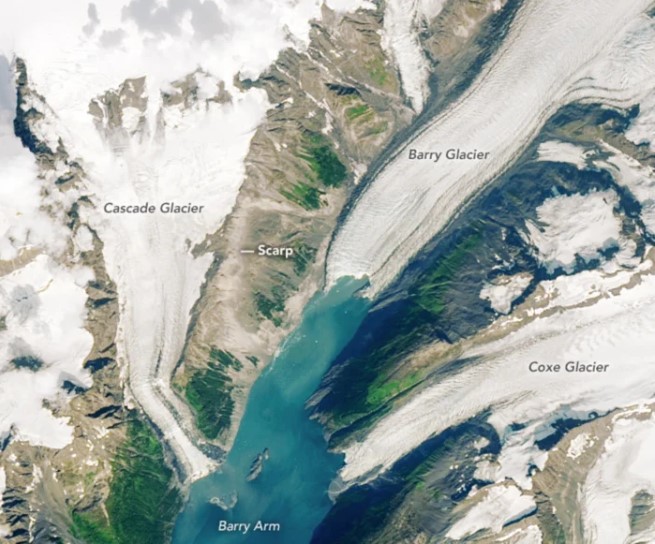 A satellite impact shows the retreating Barry Glacier and a ‘scarp’ area of loose rocks that could result in a disastrous landslideCredit: Lauren Dauphin-NASA Earth Observatory-USGS

The scientists wrote: “We, a group of scientists with expertise in climate change, landslides, and tsunami hazards, have identified an unstable mountain slope above the toe of Barry Glacier in Barry Arm, 60 miles east of Anchorage, that has the potential to fail and generate a tsunami.

“This tsunami could impact areas frequented by tourists, fishing vessels, and hunters (potentially hundreds of people at one time).

“We believe that it is possible that this landslide-generated tsunami will happen within the next year, and likely within 20 years.”

Satellite images have shown how ice melt on the glacier has left a large rocky area exposed.

It could mean a slow moving landslide is already taking place but if a large part of the mountain slope gave way it could have dire consequences. 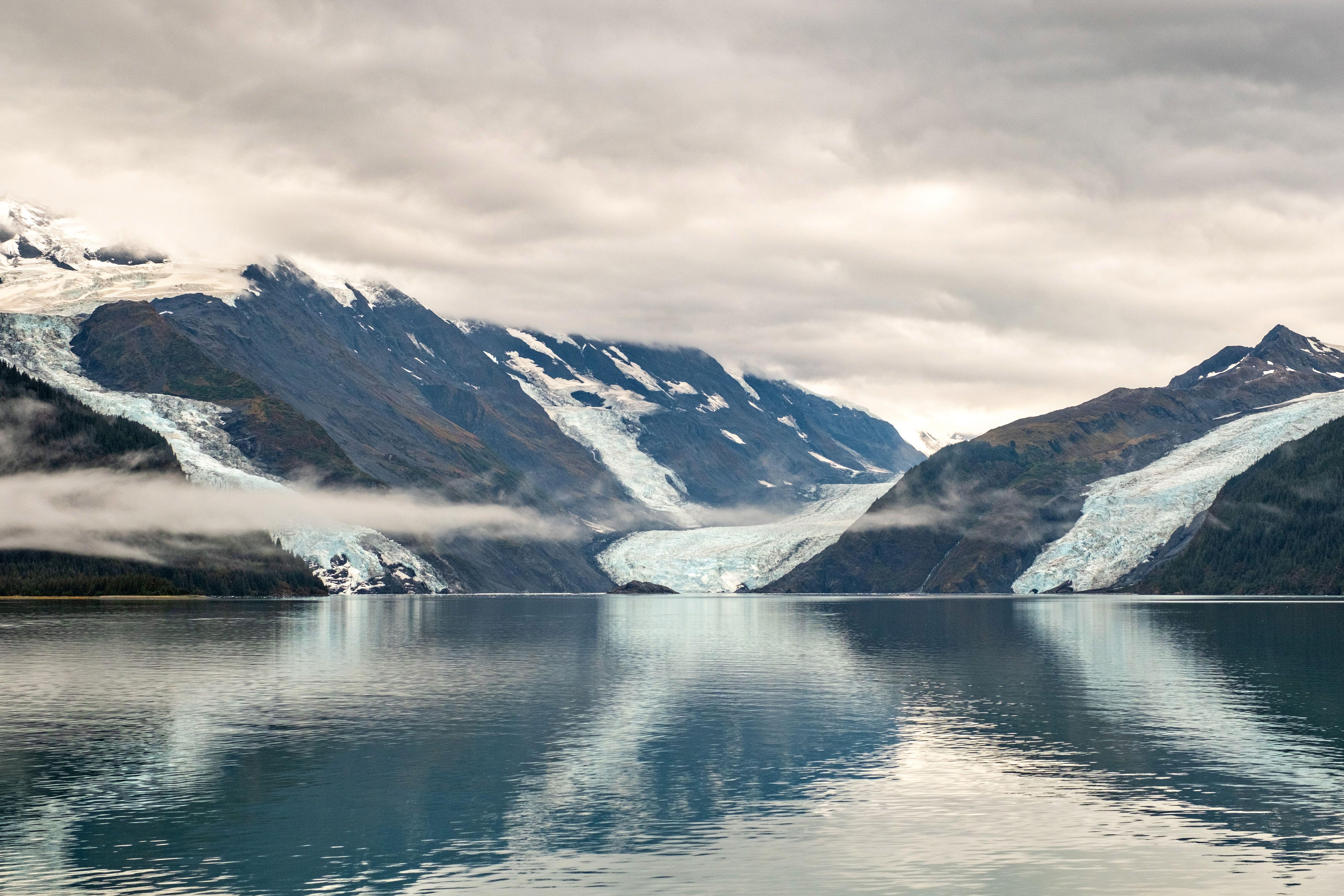 The area of Barry Arm has several glaciers that are meltingCredit: Alamy

Prince William Sound is a remote area but its surrounding waters are often frequented by boats, including cruise ships.

The researchers said: “Landslides have set off giant waves elsewhere in Alaska and Greenland during the past decade.

“The resulting tsunami reached elevations of 633 feet near the landslide, and 35 feet 15 miles away.

“At Karrat Fiord, west Greenland, a landslide in June 2017 similarly produced a tsunami that killed four people and destroyed a large portion of the town of Nuugaatsiaq, 20 miles away.

“Surviving villagers still have not returned because a nearby slope is deforming and threatening to fail.

“The unstable slope in Barry Arm is much bigger than either of these examples, and thus has the potential to produce a larger tsunami that could have impacts throughout Prince William Sound.”

A 1958 landslide in the region resulted in what’s often referred to as the tallest tsunami wave in modern times.

It was said to have reached 1,720 feet tall and the impact was compared to an atomic bomb by eye-witnesses.

Geophysicist Chunli Dai from the Ohio State University told NASA’s Earth Observatory: “It was hard to believe the numbers at first.

“Based on the elevation of the deposit above the water, the volume of land that was slipping, and the angle of the slope, we calculated that a collapse would release 16 times more debris and 11 times more energy than Alaska’s 1958 Lituya Bay landslide and mega-tsunami.”

Since the release of the open letter earlier this year, further analysis has noted little change.

Ongoing monitoring will continue so that a scientists can spot warning signs of a landslide and subsequent tsunami before it happens.

This scientists have predicted that the tsunami could cause issues over 10 miles away so a pre-warning could save lives.

The researchers’ findings are available on the ADNR website.

In other news, the past decade has seen the Atlantic Ocean see its hottest temperatures in almost three thousand years.

There’s a 50% chance we’re living in a computer simulation, according to new analysis.

And, whales, dolphins and porpoises are facing ‘imminent’ extinction, according to over 350 experts.

What are your thoughts on the melting Alaska glacier? Let us know in the comments…