The assortment of 11 pearly whites found in a cave in Jersey have a mix of Neanderthal and human features, suggesting the two species interbred. 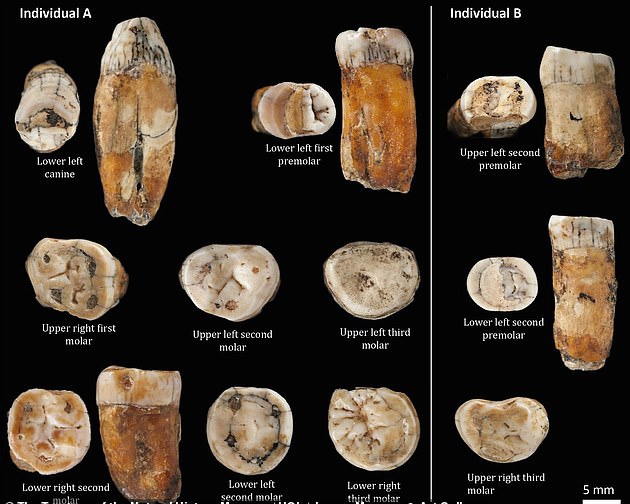 An analysis of Neanderthal teeth has revealed that the extinct species commonly interbred with our ancient human ancestorsCredit: Compton et al. / Journal of Human Evolution

Discovered on a small granite ledge within the La Cotte de St Brelade cave in 1910 and 1911, experts believe the teeth belonged to two individuals.

Their skulls or bodies were likely placed on the prominent ledge deliberately, according to experts.

Fresh analysis of the teeth by Brit scientists suggests that the pair may have been hybrid individuals with both Neanderthal and human genes. 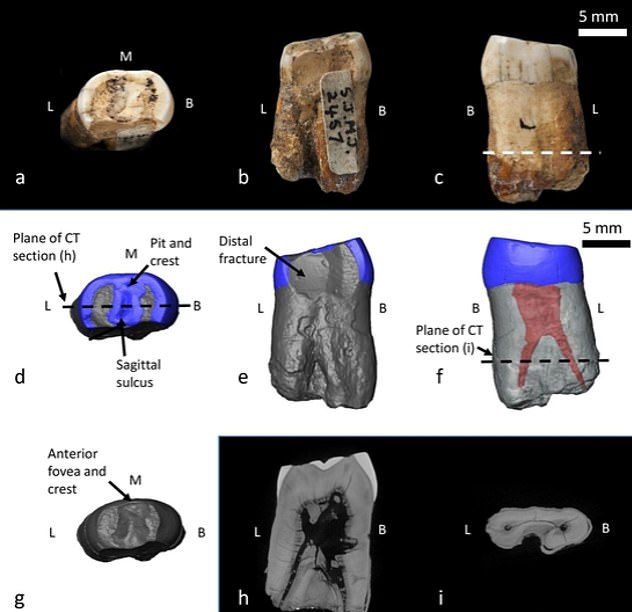 The assortment of 11 pearly whites found in a cave in Jersey have a mix of Neanderthal and human featuresCredit: The Trustees of The National History Museum / UCL / Jersey Museum & Art Gallery

The pearly whites’ large and long roots are typical of Neanderthals, but upper parts like the crowns are similar to those of modern humans.

“Modern humans overlapped with Neanderthals in some parts of Europe after 45,000 years ago,” Professor Stringer said.

“The unusual features of these La Cotte individuals suggest that they could have had a dual Neanderthal–modern human ancestry.

“This idea of a hybrid population could be tested by the recovery of ancient DNA from the teeth, something that is now under investigation.” 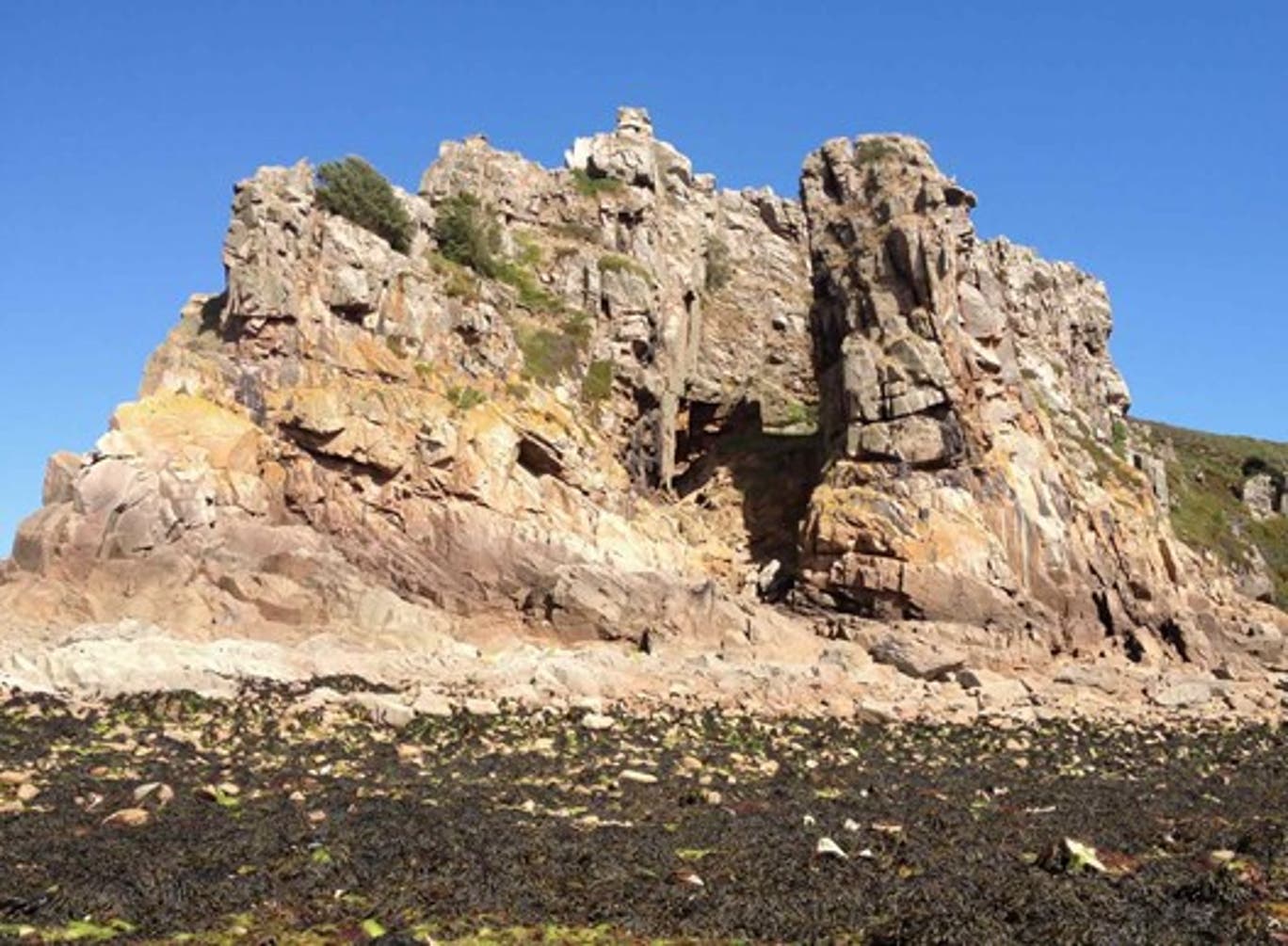 Experts believe that a community of Neanderthals and humans used the La Cotte de St Brelade cave as a hunting baseCredit: lacotte.org.je

Evidence of Neanderthal and human interbreeding has previously been uncovered at several spots across Europe.

The research team, which includes experts from University College London and the University of Kent, took three-dimensional X-ray scans of the bones.

Working with Jersey Heritage, the imagery has been made available to view on the free website, The Human Fossil Record.

Hundreds of stone tools have been uncovered at the cave siteCredit: lacotte.org.je

“Through our collaboration … anyone can examine these fossils virtually,” said Professor Matt Skinner of the University of Kent.

People can “download surface models and 3D print them if they want to have their own high-resolution copies for teaching or just to put them on their mantlepiece.

“They are the next best thing to the fossils themselves,” he added.

Scientists initially thought the La Cotte teeth, which were found alongside hundreds of stone tools and even fossilised food debris, had belonged to a single Neanderthal. 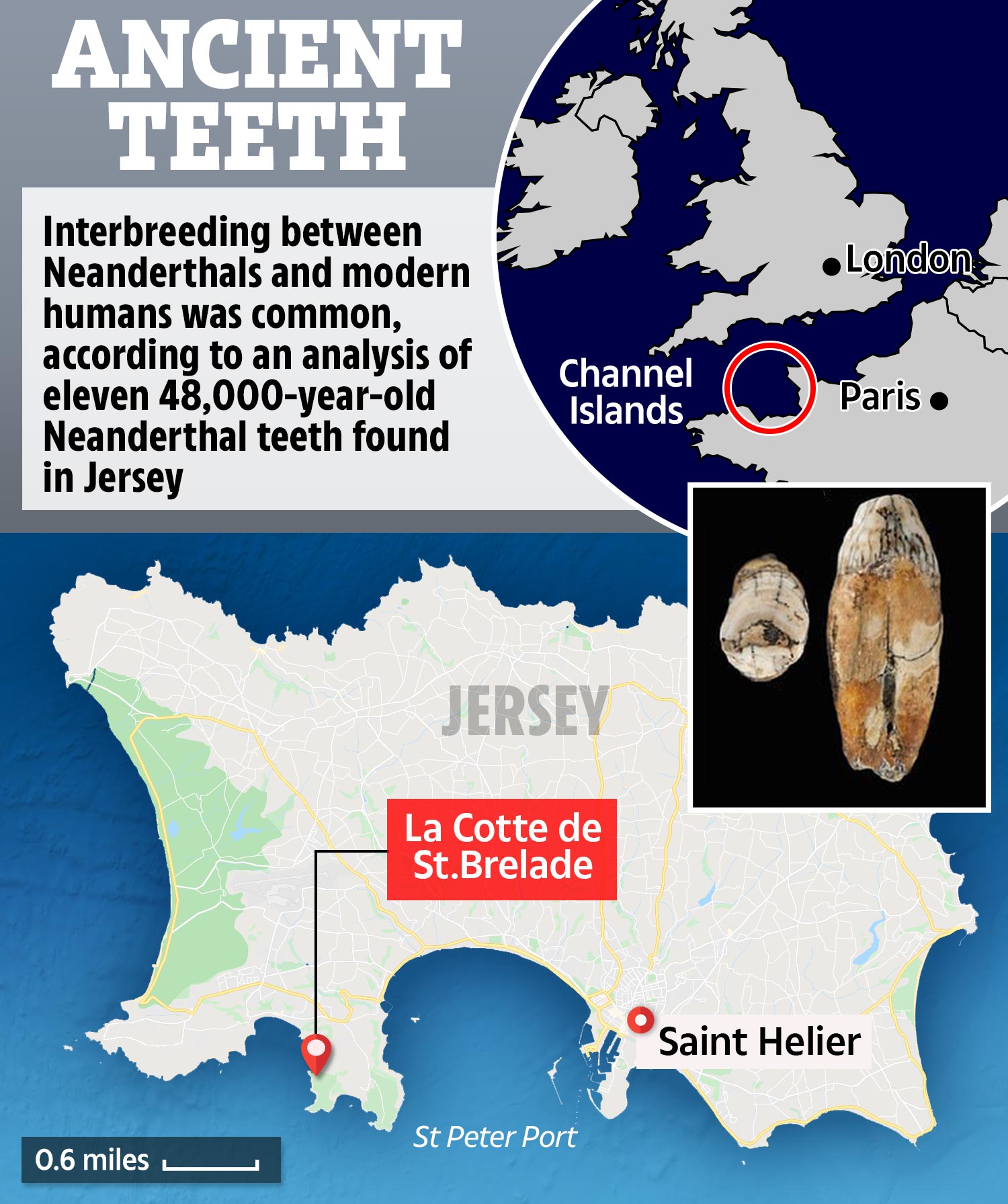 However, the new scans suggest they belonged to two individuals who likely lived in a Neanderthal community partly based within the caves.

It’s thought that the colony lived in the cave and hunted reindeer, bison and woolly mammoths in the surrounding landscape.

A series of steep-sided mini canyons nearby would have provided the perfect spot for ambush hunting, researchers said. 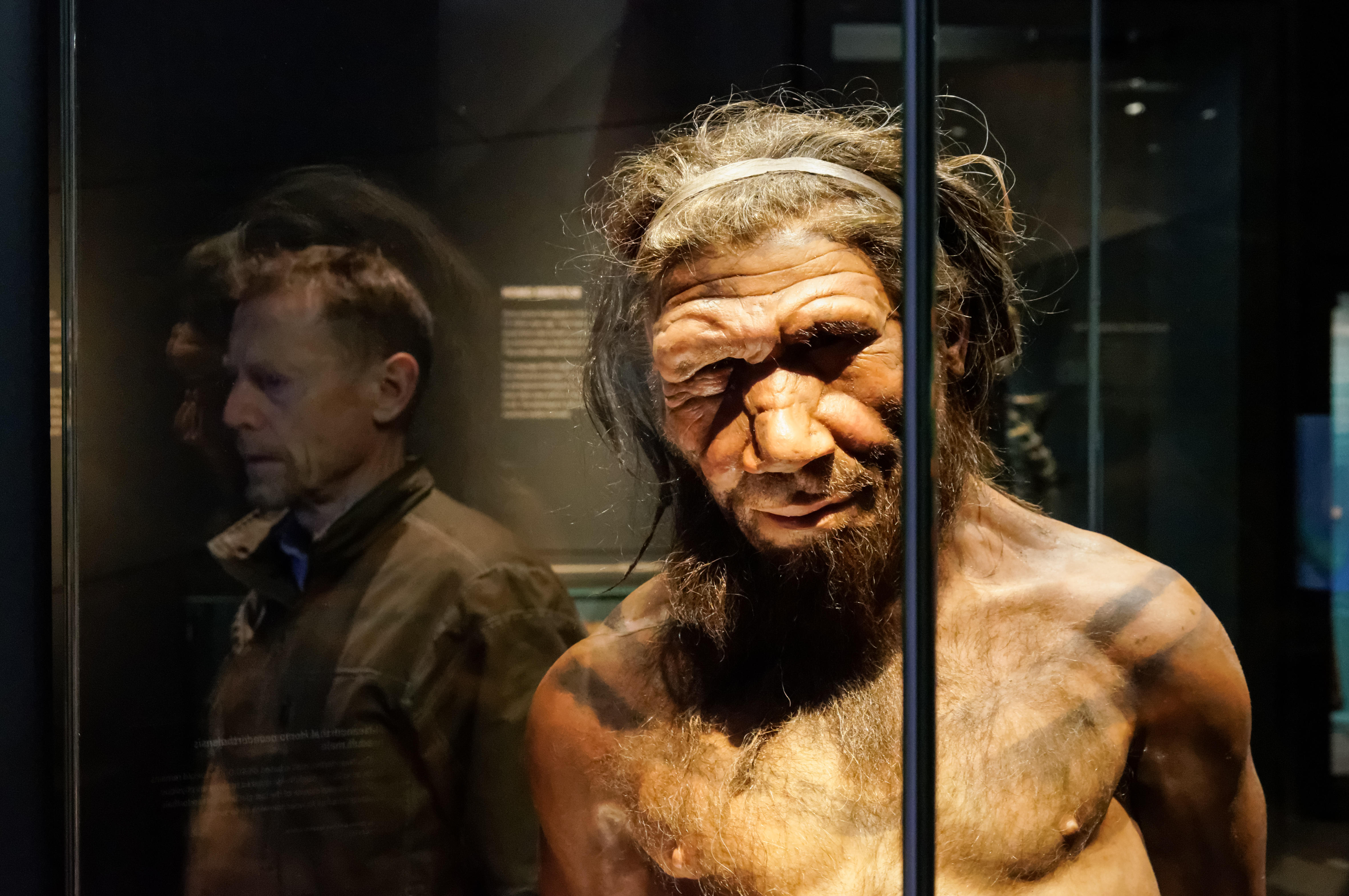 The thickset creatures are believed to have died out roughly 40,000 years agoCredit: Alamy

“This work offers us a glimpse of a new and intriguing population of Neanderthal people and opens the door to a new phase of discovery at the site,” said archaeologist Dr Matt Pope of the University College London.

Though the cave teeth were discovered more than a century ago, further excavation at the site began in 2019.

“We will now work with Jersey Heritage to recover new finds and fossils from La Cotte de St Brelade, undertake a new programme analysis with our scientific colleagues, and put in place engineering to protect this very vulnerable site for the future,” Dr Pope added.

“It will be a mammoth project and one to watch for those fascinated by our closest evolutionary relatives.”

The research was published in the Journal of Human Evolution. 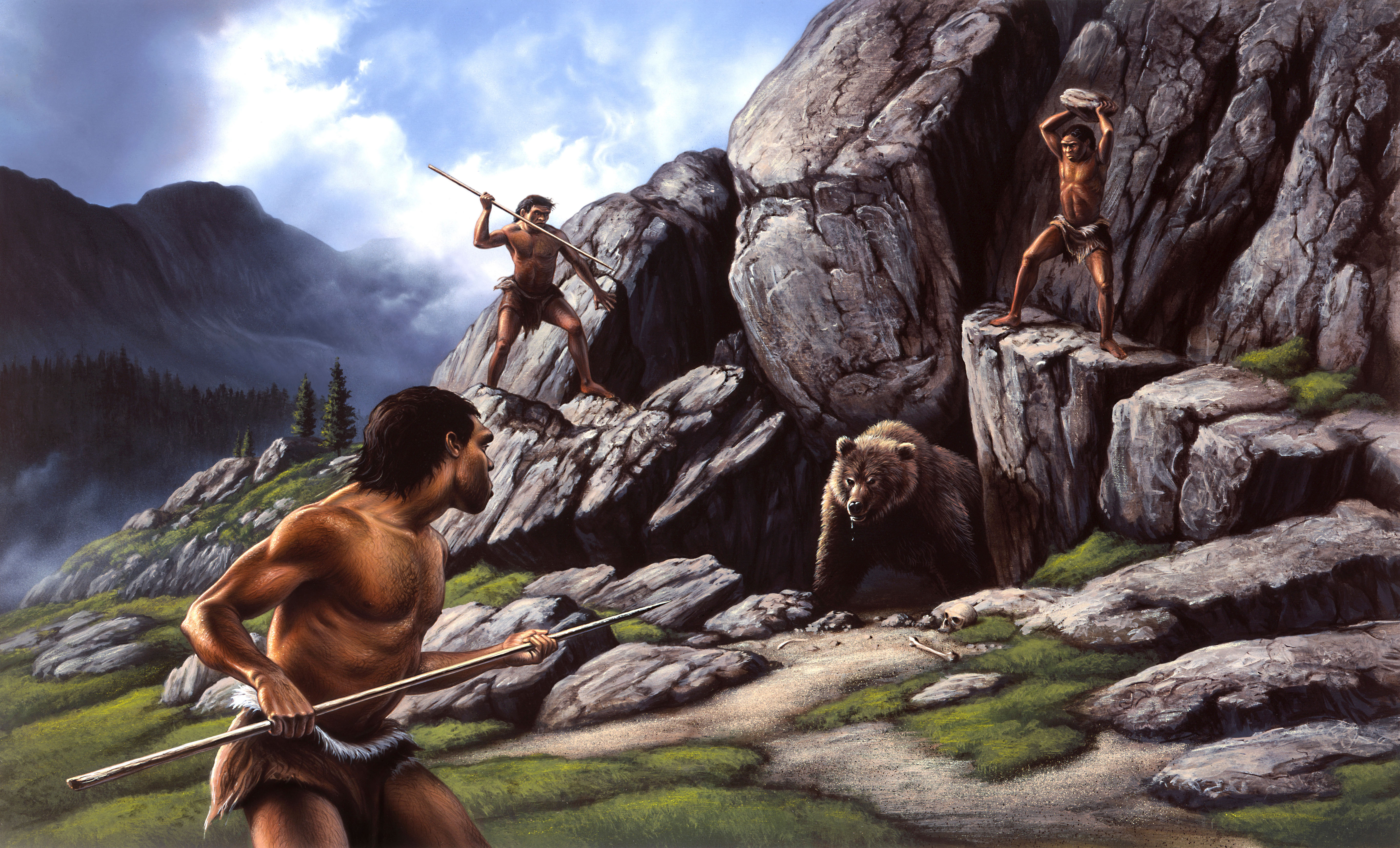 Neanderthals are an extinct human-like species thought to have lived across a vast region of the planet, including Britain, Spain, Siberia and Iraq.

With squashed skulls, bulging noses and large, prominent brows, the thickset hominids are believed to have died out roughly 40,000 years ago.

It’s not clear what killed off the Neanderthals, but scientists blame the arrival of modern humans from Africa for the species’ untimely demise.

Archaeologists had long presumed that the creatures were simply outcompeted for food and other resources by their smarter human cousins.

A timeline of life on Earth

Here’s a brief history of life on our planet

However, recent research has suggested that the Neanderthals were brighter than we thought, capable of painting elaborate cave art and crafting yarn from plant material.

They may have even had larger brains than we do.

It’s become increasingly clear over the past decade that Neanderthals and humans interbred for the few thousand years that they shared Eurasia.

Between one and two per cent of the genes in the DNA of Europeans are thought to have been passed on to us by our thicker-browed cousins.

In other news, the remnants of Neanderthal ancestry can be found in human genomes all over the world.

Archaeologists think they’ve uncovered a murder victim from the Iron Age at a farm in the UK.

And, hidden silver treasure from WW2 has been unearthed at a 600-year-old castle used by Nazis.

What do you make of the cave find? Let us know in the comments!