Some electrical eels coordinate assaults to zap their prey

Such a sight was assumed to be only the stuff of nightmares, at least for prey. Researchers have long thought that these eels, a type of knifefish, are solitary, nocturnal hunters that use their electric sense to find smaller fish as they sleep (SN: 12/4/14). But in a remote region of the Amazon, groups of over 100 electric eels (Electrophorus voltai) hunt together, corralling thousands of smaller fish together to concentrate, shock and devour the prey, researchers report January 14 in Ecology and Evolution.

“This is hugely unexpected,” says Raimundo Nonato Mendes-Júnior, a biologist at the Chico Mendes Institute for Biodiversity Conservation in Brasilia, Brazil who wasn’t involved in the study. “It goes to show how very, very little we know about how electric eels behave in the wild.” 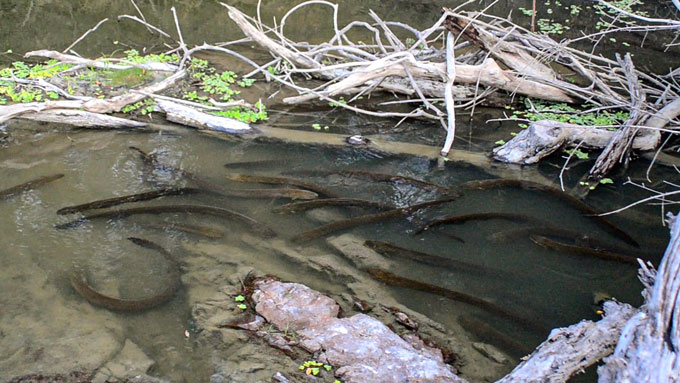 Volta’s electric eels sometimes hunt as a group (pictured), using their numbers to corral shoals of smaller fish into shallow areas where they can easily be picked off.Douglas Bastos

Group hunting is quite rare in fishes, says Carlos David de Santana, an evolutionary biologist at the Smithsonian’s National Museum of Natural History in Washington, D.C. “I’d never even seen more than 12 electric eels together in the field,” he says. That’s why he was stunned in 2012 when his colleague Douglas Bastos, now a biologist at the National Institute of Amazonian Research in Manaus, Brazil, reported seeing more than 100 eels congregating and seemingly hunting together in a small lake in northern Brazil.

Two years later, de Santana’s team returned to the lake to make more detailed observations. The nearly 2-meter-long eels lethargically lay in deeper waters during much of the day, the researchers found. But at dusk and dawn, these long streaks of black come together, swirling in unison to form a writhing circle over 100 strong that herds thousands of smaller fish into shallower waters.

Volta’s electric eels can gather in groups, working together to corral smaller fish in shallower waters, a new study finds. Then, groups of about 10 eels attack in unison, shocking the fish out of the water and into a stupor so that they can easily be eaten.

After corralling the prey, smaller groups of about 10 eels unleash coordinated electric attacks that can send shocked fish flying from the water. The researchers haven’t yet measured the combined voltage of such attacks, but 10 Volta’s eels firing together could, in theory, power something like 100 light bulbs, de Santana says. The then helpless, floating prey make easy pickings for the mass of eels. The whole ordeal lasts about two hours.

So far, such aggregations have been observed in only this one lake. But de Santana suspects that group hunting may be advantageous in other lakes and rivers with large shoals of small fish. Much of the eels’ range remains underexplored by scientists, so de Santana and colleagues are launching a citizen science project with Indigenous communities to identify more spots where many eels live together, he explains. “There is still so much we don’t know about these organisms.”