THE FOUR newly minted citizen astronauts comprising the SpaceX Inspiration4 mission safely splashed down in the Atlantic on Saturday.

The landing off Florida’s coast completed a three-day flight of the first all-civilian crew ever sent into Earth orbit.

SpaceX’s Inspiration4 mission has safely splashed down in the AtlanticCredit: Reuters 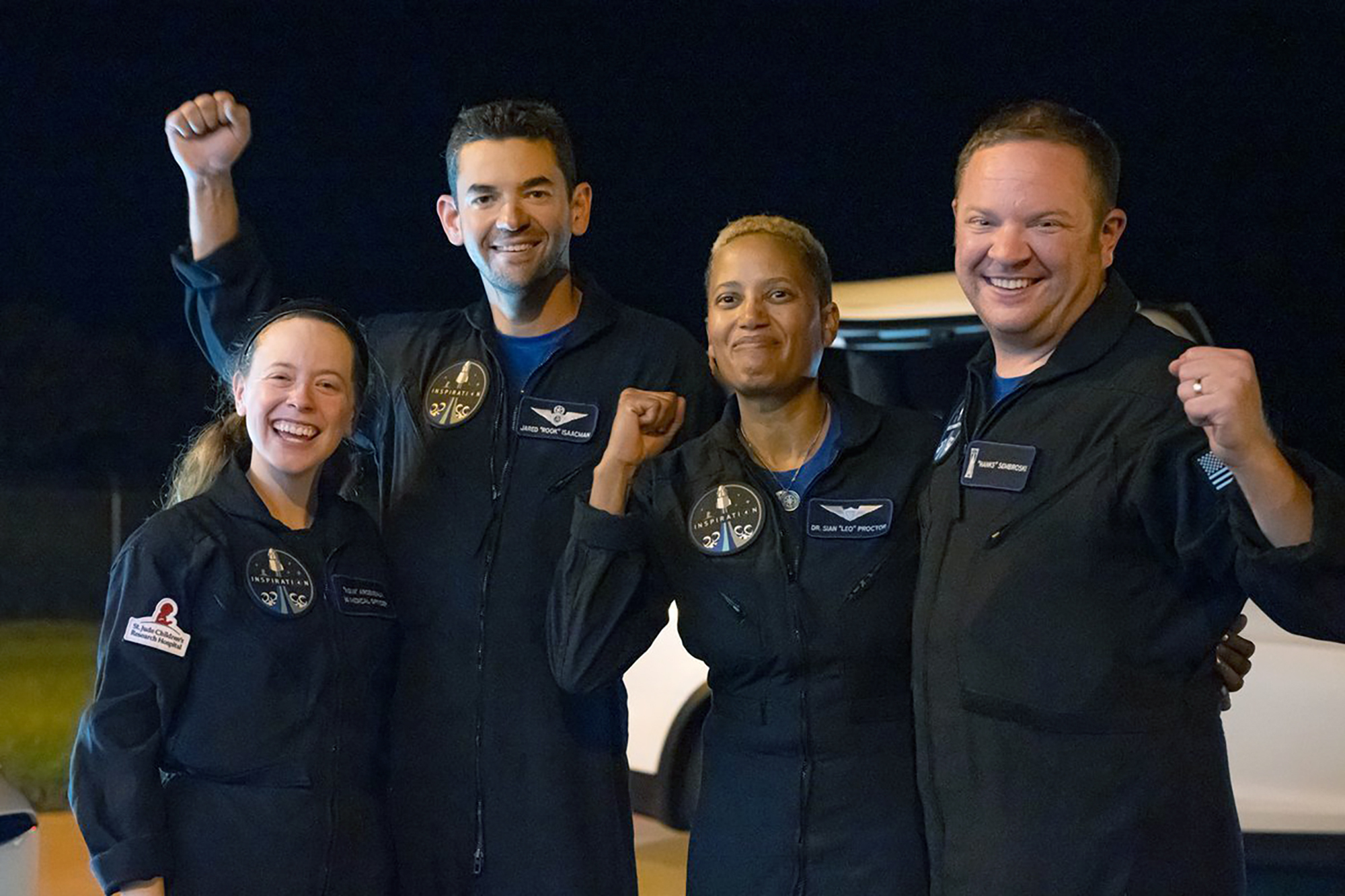 Passengers, from left to right, Hayley Arceneaux, Jared Isaacman, Sian Proctor and Chris Sembroski pose after the capsule was recovered following its splashdown

The successful launch and return of the mission, the latest in a recent string of rocket-powered expeditions bankrolled by their billionaire passengers, marked another milestone in the fledgling space tourism industry.

“Welcome to the second space age,” Todd “Leif” Ericson, mission director for the Inspiration4 venture, told reporters on a conference call after the crew returned.

The splash down shortly before sunset followed an automated re-entry descent, as shown during a live SpaceX webcast on its YouTube channel.

Within an hour the four smiling crew members were seen emerging one by one from the capsule’s side hatch after the vehicle, visibly scorched on its exterior, was hoisted from the ocean to the deck of a SpaceX recovery vessel.

Each of the four stood on the deck for a few moments in front of the capsule to wave and give thumbs-up before being escorted to a medical station on board for checkups at sea.

Afterward they were flown by helicopter back to Cape Canaveral for reunions with loved ones.

The return from orbit followed a plunge through Earth’s atmosphere generating frictional heat that sent temperatures surrounding the outside of the capsule soaring to 3,500 degrees Fahrenheit (1,900 degrees Celsius). The astronauts’ flight suits, fitted to special ventilation systems, were designed to keep them cool if the cabin heated up.

Applause was heard from the SpaceX flight control center in suburban Los Angeles as the first parachutes were seen deploying, slowing the capsule’s descent to about 15 miles per hour (25 kph) before splashdown, with another round of cheers as the craft hit the water.

The astronauts were cheered again as they stepped onto the deck of the recovery ship.

First out was Hayely Arceneaux, 29, a physician assistant at St. Jude Children’s Research Center in Tennessee, a childhood bone cancer survivor herself who became the youngest person ever reach Earth orbit on the Inspiration4 mission.

“That was a heck of a ride for us,” Isaacman, chief executive of the e-commerce firm Shift4 Payments Inc, radioed from inside the capsule moments after splashdown. “We’re just getting started.”

He had paid an undisclosed sum – put by Time magazine at roughly $200 million – to fellow billionaire Musk for all four seats aboard the Crew Dragon.

The Inspiration4 team blasted off on Wednesday from the Kennedy Space Center in Cape Canaveral atop one of SpaceX’s two-stage reusable Falcon 9 rockets.

Within three hours the crew capsule had reached a cruising orbital altitude of 585 km, or just over 363 miles – higher than the International Space Station or Hubble Space Telescope, and the farthest any human has flown from Earth since NASA’s Apollo moon program ended in 1972.

It also marked the debut flight of Musk’s new space tourism business and a leap ahead of competitors likewise offering rides on rocket ships to well-heeled customers willing to pay a small fortune to experience the exhilaration of spaceflight and earn amateur astronaut wings.

Musk’s company already ranks as the best-established player in the burgeoning constellation of commercial rocket ventures, having launched numerous cargo payloads and astronauts to the space station for NASA.

Those suborbital flights, lasting a matter of minutes, were short hops compared with Inspiration4’s three days in orbit.

Isaacman conceived of Inspiration4 primarily to raise awareness and donations for St. Jude, one of his favorite causes, where Arceneaux now works. Ericson said the flight had so far raised $160 million for the cancer institute, including $100 million donated by Isaacman at the outset.

The Inspiration4 crew had no part to play in flying the spacecraft, which was controlled by ground-based flight teams and onboard guidance systems, although Isaacman and Proctor are both licensed pilots.

But Ericson insisted the crew had “the same training and the same control and authority that NASA astronauts have” to intervene in the Crew Dragon’s operation in the event of an emergency.

SpaceX’s human-spaceflight chief, Benji Reed, marveled at how little went wrong during the flight, citing just two problems he described as minor and easily resolved – a malfunctioning fan in the crew’s toilet system and a faulty temperature sensor on one of the spacecraft’s engines.

The level of “space adaption syndrome” experienced by the crew – vertigo and motion sickness while acclimating to a microgravity environment – was “pretty much on target with what NASA astronauts do,” Ericson said.

All four had appeared relaxed and energetic during a number of live video appearances they made for Earth-bound audiences during their flight, from performing zero-G somersaults in the cabin to strumming a ukulele. 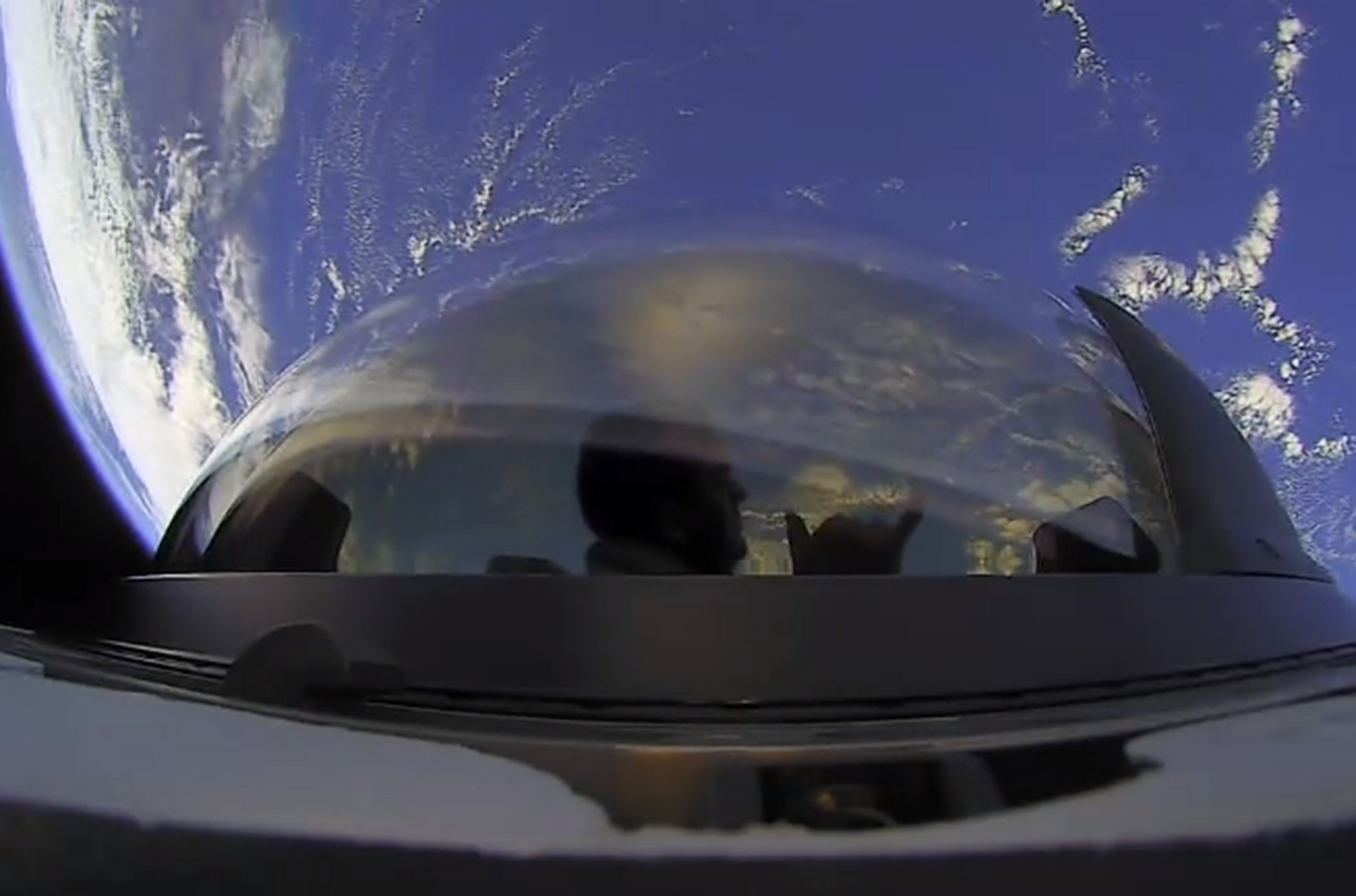 Inspiration4, the world’s first all-civilian mission to space, provides an in-flight update on September 17, 2021, during their three-day missionCredit: Rex

The hunt for meteorites may have just gotten some new leads. A powerful new machine learning algorithm has identified over...

How mindfulness-based training can give elite athletes a mental edge

Not Even Free Money Can Fix a Carbon Tax

How AI can identify people even in anonymized datasets

Stuck inside this winter? Try an at-home citizen science project