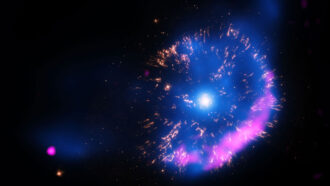 Each year, astronomers discover nova explosions in the Milky Way that cause dim stars to flare up and emit far more light than the sun before they fade again. But our galaxy is so big and dusty that no one knows how many of these eruptions occur throughout its vast domain, where they fling newly minted chemical elements into space.

Now, by detecting the explosions’ infrared light, which penetrates dust better than visible light does, Caltech astronomer Kishalay De and his colleagues have estimated how often these outbursts occur in the Milky Way. Knowing the nova rate is vital for determining how much these explosions have contributed to the galaxy’s chemical makeup by creating new elements.

The updated tally puts the rate at 46, give or take 13, a year, the team reports January 11 at arXiv.org. Past estimates of the nova rate have ranged from just 10 a year to 300.

A nova arises from a binary star — two stars circling each other. One is a white dwarf, a dense star that’s about as small as Earth but approximately as massive as the sun. After the white dwarf receives gas from its companion, the gas explodes, making the dim star shine brilliantly. The nova does not destroy the star, unlike a supernova, which marks a star’s death.

After observing the sky from Palomar Observatory in California for 17 months, De and colleagues detected 12 nova explosions. Estimating the number of missed outbursts, the astronomers deduced the yearly nova rate. Their rate is similar to, but more precise than, one reported four years ago by Allen Shafter, an astronomer at San Diego State University who pegged the annual nova rate at between 27 and 81.

“They’re doing a wonderful job,” says Bradley Schaefer, an astrophysicist at Louisiana State University in Baton Rouge, who notes that searching at infrared wavelengths is ideal for finding distant explosions obscured by the galaxy’s dust. “They have an awful lot of really good data.”

The more precise rate helps firm up estimates for how much these explosions have altered the galaxy’s chemical composition. In this regard, it’s hard for a mere nova to compete with a supernova explosion, which, though rare, releases far more newly produced elements than a nova does. But if the annual nova rate is around 50, then certain scarce isotopes on Earth — such as lithium-7, carbon-13, nitrogen-15 and oxygen-17 — arose partially or mostly in nova explosions, says Sumner Starrfield, an astronomer at Arizona State University in Tempe who was not involved with this study. The blasts then spirited these isotopes away before additional nuclear reactions could destroy them.