MAX VERSTAPPEN cried out ‘argh f***!’ to his team radio after a huge crash during the British Grand Prix at Silverstone.

The first-lap incident with Lewis Hamilton, which led to the 23-year-old being taken to hospital, has sparked a huge row in Formula One.

Max Verstappen hit the wall after a 180mph collision at Silverstone 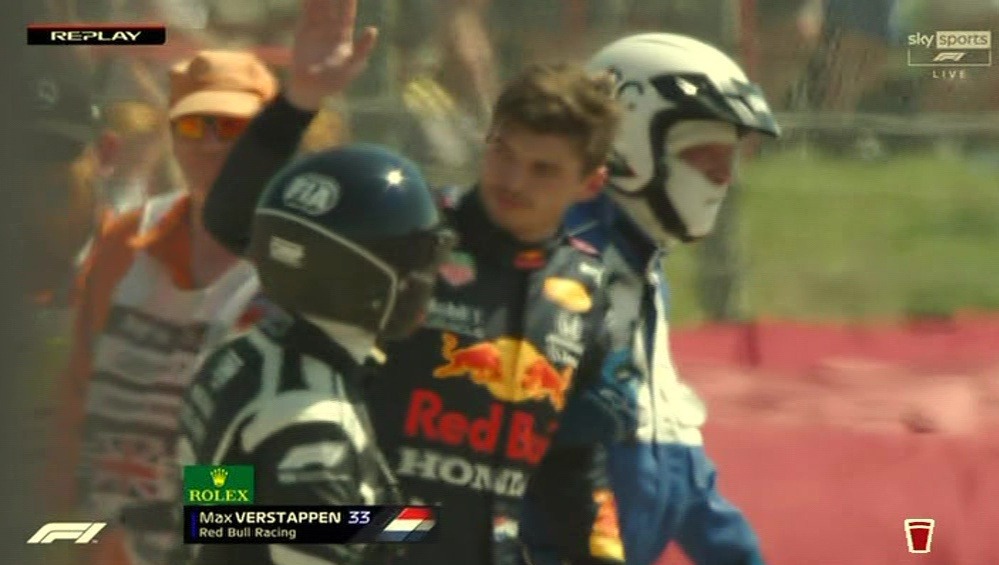 Hamilton started behind his championship rival in Sunday’s race and the pair engaged in a titanic battle for the lead.

Heading into the 180mph Copse Corner, the Brit launched down the inside to attempt an overtake but Verstappen took the racing line across him.

The pair made contact, sending the Dutchman across the gravel and into the tyre wall at high speed.

The impact measured 51G in terms of G-force, leading to the driver being taken to hospital for checks.

Team radio from the crash shows the Red Bull garage instantly checking in on Verstappen to ensure he is safe.

The championship leader gingerly exited his car with the help of marshals before thankfully being able to walk away from the wreckage.

After being taken to the Silverstone medical centre, he was sent to nearby Coventry hospital for checks and discharged on Sunday night with the all-clear.

Verstappen posted a selfie with himself and dad Jos to thank fans for their support.

Watching the celebrations while still in hospital is disrespectful and unsportsmanlike behavior.

He wrote on Twitter: “Cleared from the hospital after all the checks were ok. Thank you to everyone for all the nice messages and best wishes.”

Fans are divided over who was at fault for the crash with Hamilton handed a ten-second time penalty before going on to win the Grand Prix.

Verstappen had branded the Brit ‘disrespectful’ for celebrating the victory in front of the Silverstone crowd amid his hospital visit.

He posted online: “Glad I’m ok. Very disappointed with being taken out like this.

“The penalty given does not help us and doesn’t do justice to the dangerous move Lewis made on track. Watching the celebrations while still in hospital is disrespectful and unsportsmanlike behavior but we move on.”

Hamilton, 36, refused to apologise for the incident post-race but sent his best wishes to Verstappen.

The reigning champion, who suffered racial abuse online in the crash’s aftermath, wrote: “Today is a reminder of the dangers in this sport.

“I send my best wishes to Max who is an incredible competitor. I’m glad to hear he is ok. I will always race hard but always fairly.

“My team showed grit and perseverance out there. It’s a dream to win in front of my home crowd.”