ARSENAL’S squad reportedly high-five a huge mural of Arsene Wenger on their way in to training every day.

The floor-to-ceiling picture adorns the wall at the entrance of their London Colney base. 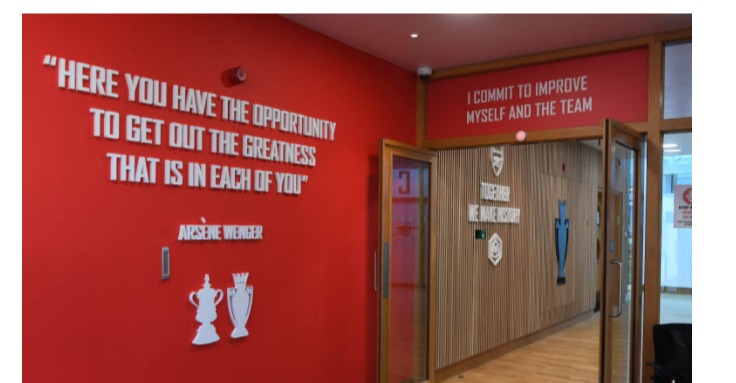 And next to the giant portrait is a quote from Arsenal legend Wenger.

It reads: “Here you have the opportunity to get out the greatness that is in each of you.”

It’s thought to be the work of boss Mikel Arteta, 39, who is keen to stay connected with club’s roots, according to The Athletic.

The Spaniard is keen for his players to embrace the legacy Wenger left at the club after 22-years in the Arsenal hot-seat.

Young boss Arteta is said to have reached out to his former manager to ask him to provide a message for Gunners players to read as soon as they arrive at training.

Wenger’s picture and words greet the Arsenal players as they arrive at the club’s base, and it’s now a tradition for them to high-five the portrait on their way in.

It seems to have done the trick recently, with Arsenal unbeaten in their last nine games in all competitions.

The Gunners have also recently unveiled a new-look tunnel and dressing room at the Emirates.

The North Londoners had three weeks to complete the new designs between the matches against Tottenham and Crystal Palace.

Now there is a modern look around the stadium, bearing Arsenal’s traditional red and white colours.

The club have also made effective use of LED lighting, with the changing room perimeter glowing red.

The floor of the changing room displays a huge Arsenal badge, while the wall reads: “We are the Arsenal.”

There are more words of motivation for Arsenal players to look at before heading out onto the pitch.

Lining the players tunnel is a red wall with white lighting, bearing the words: “Victory through harmony.”

The motto is a key part of Arsenal’s history, first produced by former programme writer Harry Homer in the 1947-48 season.