LIVERPOOL found the only way to stop keeper Caoimhin Kelleher making as big a name for himself as he would have liked on his Premier League debut.

The Reds left off the first “e” from the 22-year-old’s surname on his shirt against Wolves for the first half – spelling trouble for the champions on social media. 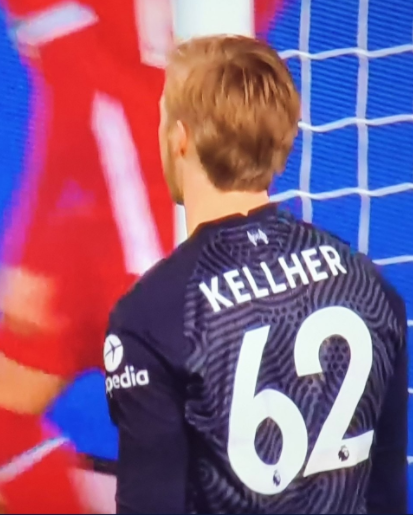 I thought my eyes were deceiving me but I genuinely think LFC have misspelled Kelleher’s name on his shirt ? #Kellher #LFC

Armchair observers checked for their spectacles – only to find that their eyes were NOT deceiving them over the unusual type of error.

Republic of Ireland Under-21 star Kelleher was undaunted as he kept out Wolves before the break, Mo Salah’s goal dividing the teams.

But there was no letter-up on social media, even though Liverpool corrected the spelling for the second half.

One fan tweeted: “I thought my eyes were deceiving me but I genuinely think LFC have misspelled Kelleher’s name on his shirt.”

That brought responses like “Glad it wasn’t just me who noticed that blunder” and “How have they managed that”.

But others pointed out Kelleher has more important things to worry about than a printing mistake.

One supporter posted: “I think he’s just happy with the chance.”

That led his first manager, Eddie Harrington, who bossed him for Ringmahon Rangers under-14s, to claim: “He’s the biggest thing to happen to Cork since Roy Keane.”

And he again impressed against Wolves, before Georginio Wijnaldum and Joel Matip made it 3-0 to Liverpool by the midway point of the second period.

With this sort of start to his European and domestic careers, Kelleher will surely be buzzing like a spelling bee.