The Blues’ development squad will take on their West London rivals at Kingsmeadow on Monday evening.

Ben Chilwell’s one of four senior players set to play for Chelsea’s development side in their Premier League 2 clash with FulhamCredit: Rex

And they’ve been given a huge boost by the inclusion of Chilwell, along with his first team counterparts Carney Chukwuemeka, Ethan Ampadu and Trevoh Chalobah, according to the Evening Standard.

England ace Chilwell missed a large chunk of last season due to a knee injury sustained in the Blues’ Champions League clash with Juventus in December.

But the 25-year-old was all smiles as he returned to pre-season training with the Chelsea squad this summer.

However, Chilwell’s still lacking the match fitness required to play alongside his senior peers in the Premier League. 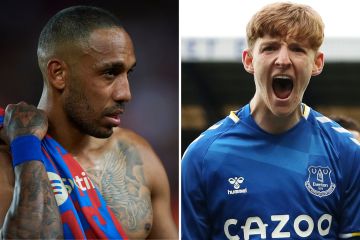 So Blues boss Thomas Tuchel is letting the full-back get some much-needed game time under his belt with the club’s youngsters.

The same goes for Chelsea new-boy Chukwuemeka who joined the club for £20million from Aston Villa in this transfer window.

The 18-year-old’s yet to make his Blues Prem debut, so a run-out against the young Cottagers will keep him fresh.

Fellow Blues starlet Ampadu has failed to break into Chelsea’s first team thus far but plans to change that like Chalobah did last term.

Chalobah was a revelation for the Blues in the previous campaign.

The youngster was an unused substitute, along with Chilwell, in the Blues’ fierce 2-2 draw against Tottenham on Sunday afternoon.

The pair would’ve had a perfect view of coach Tuchel’s touchline spat with Spurs boss Antonio Conte after the contest.

And they were expected to be joined in the development squad by Callum Hudson-Odoi.

However, he’s on the brink of finalising a loan move away from Stamford Bridge, it was added.

SunSport reported last week that Borussia Dortmund were leading the race to sign him, although the Standard claim Leicester and Southampton are also in contention.