A FEW hundred Everton fans may have deserted them – but their players showed they are very much still behind Rafa Benitez.

On a filthy night on Merseyside, some chose to make their feelings known by heading for the Goodison exits as part of a planned protest in the 27th minute. 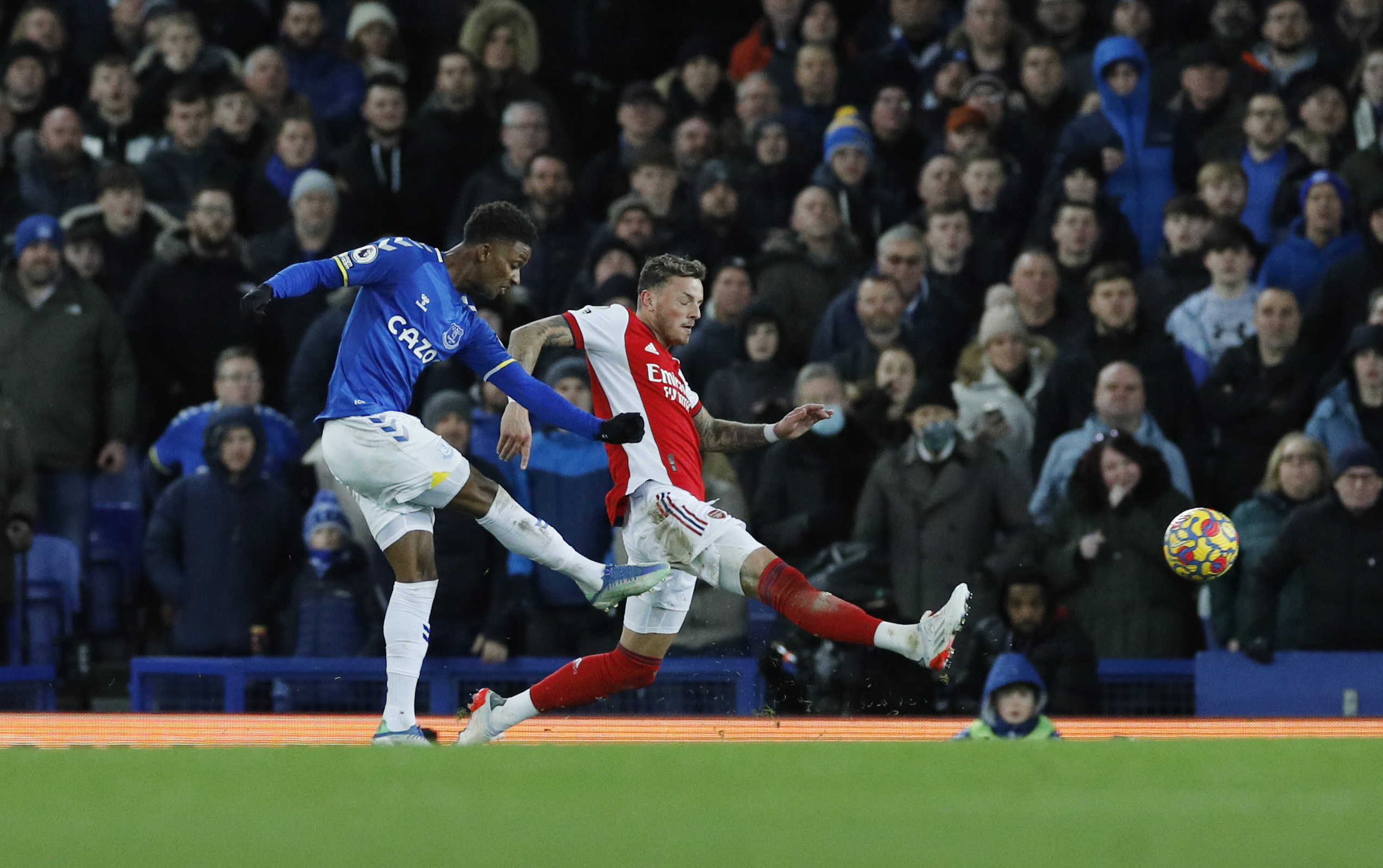 You couldn’t blame others if they had followed them given the luck their team had in the first three quarters of this game.

But if at first you don’t succeed, try, try again.

And that’s what Richarlison did as he put the disappointment of seeing two goals ruled out by the VAR behind him to grab the equaliser.

Then Demarai Gray thundered in a sensational stoppage time winner from 25 yards to send those who did stay into ecstasy.

Benitez may have won his Goodison power battle with director of football Marcel Brands at the weekend.

But what the Spaniard needed more than anything is to win some football matches – it was September 25 last time his team managed one. 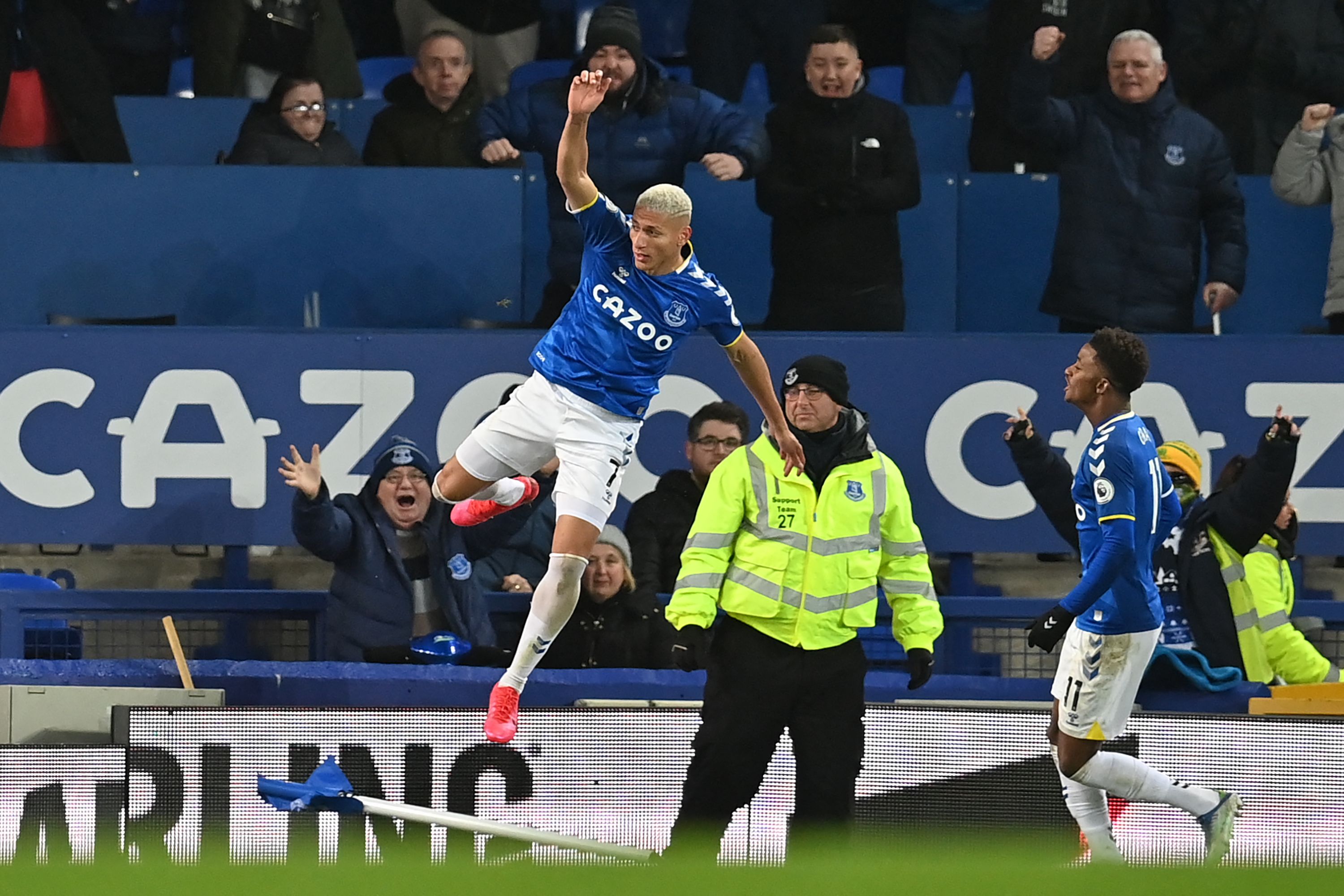 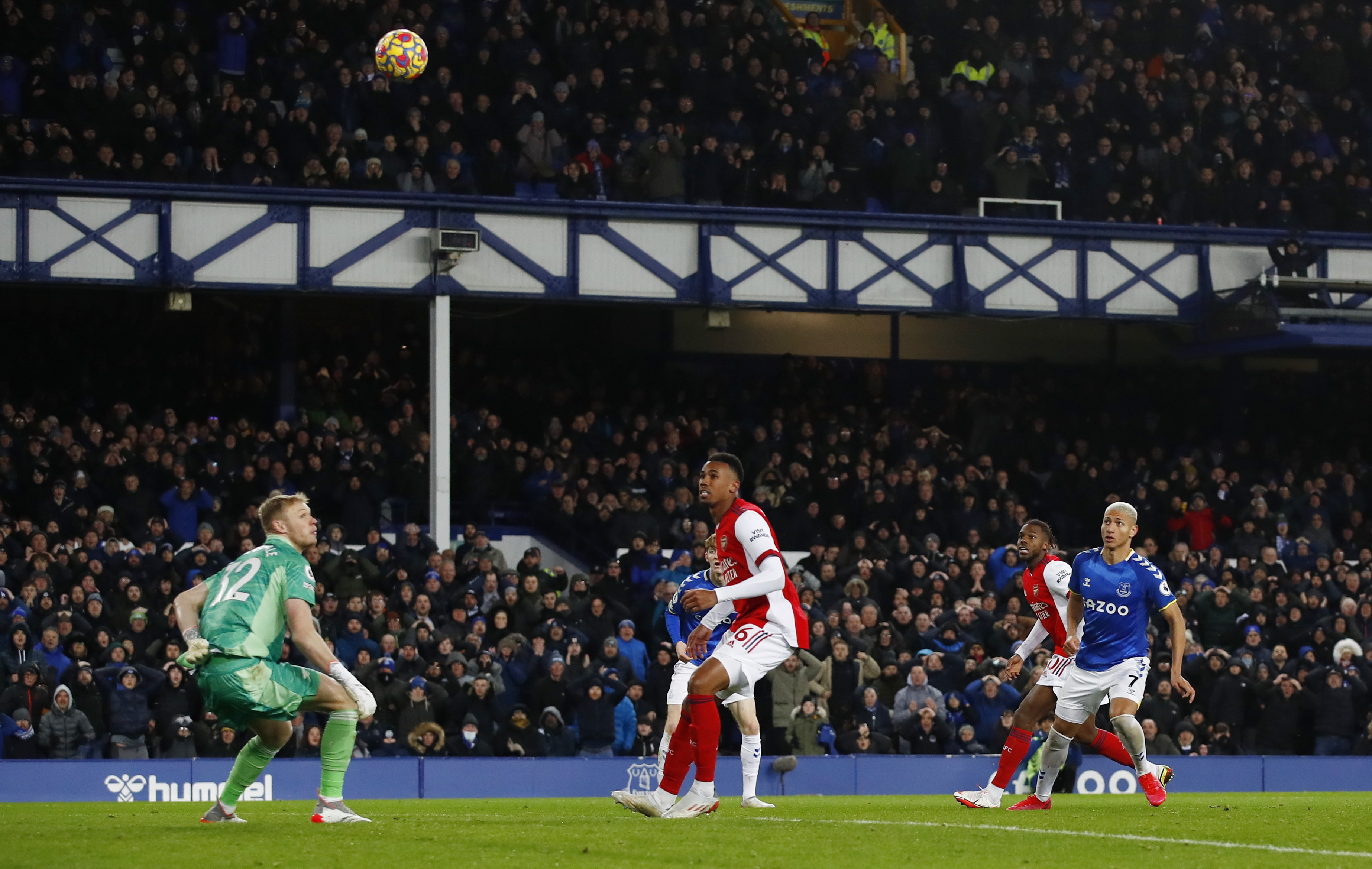 The Everton forward looped home a header to equaliseCredit: Reuters

That’s nine games ago – so how he needed this one. Could this be the night that his reign really takes off?

Gunners boss Mikel Arteta spent six years in the blue of Everton between 2005 and 2011 but arrived on Merseyside looking to continue his team’s recent upturn.

They were bottom of the table after three games with no points or goals – but then followed that with seven wins in their next 11.

Maybe his old club could take some heart from the fortunes of their former star.

The Toffees season has been the opposite way round – with all their good early work undone in the last couple of months.

The disastrous Merseyside derby defeat at Goodison on Wednesday was their eighth game without a win – and left them back in 16h place in the Prem table. 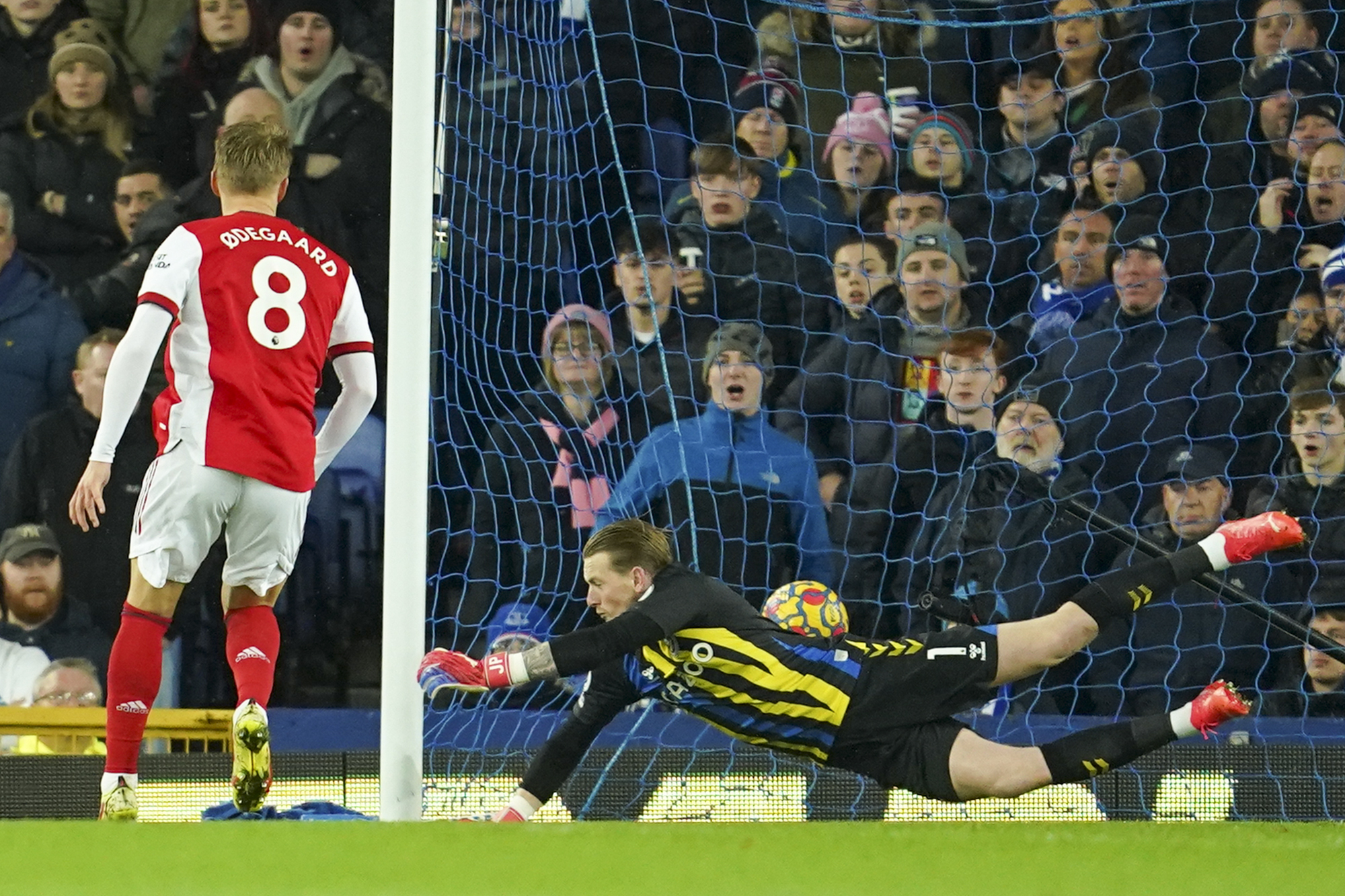 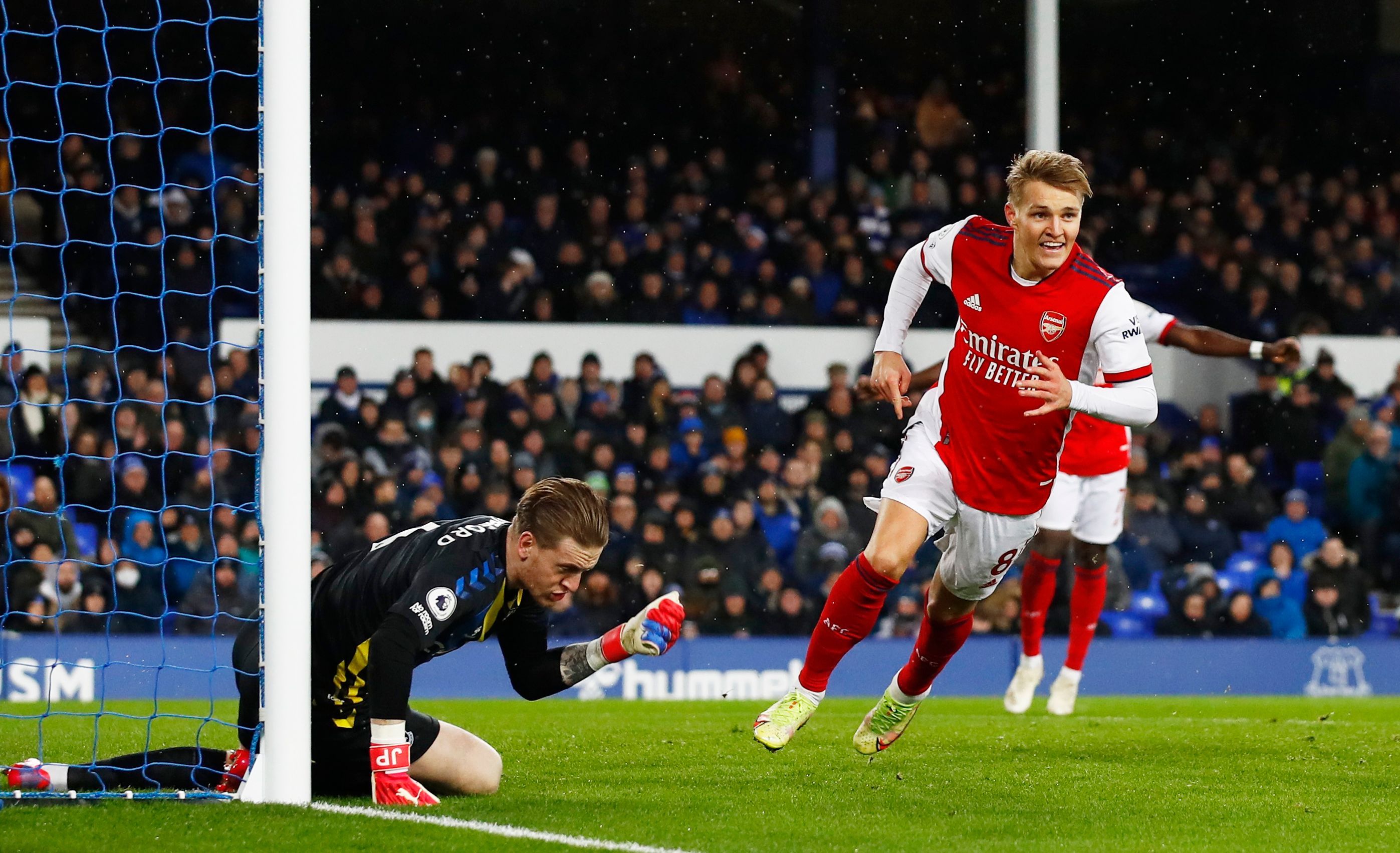 And their problems on the pitch are mirrored by those off it.

The situation isn’t ideal for the Toffees off the pitch either, after the news on Sunday that Brands has left with immediate effect after three and a half years in the role.

Everton have enjoyed games against Arsenal recently. They won home and away last season and drew the one before that.

They started brightly here too as Gray cut in from left and weaved his way through before shooting high over the bar.

Richarlison then slipped a pass to Abdoulaye Doucoure but he miscued his shot and if drifted wide.

Arsenal were slow to get going with Thomas Partey blasting their only opening of any note high over the bar – and almost over the stands. 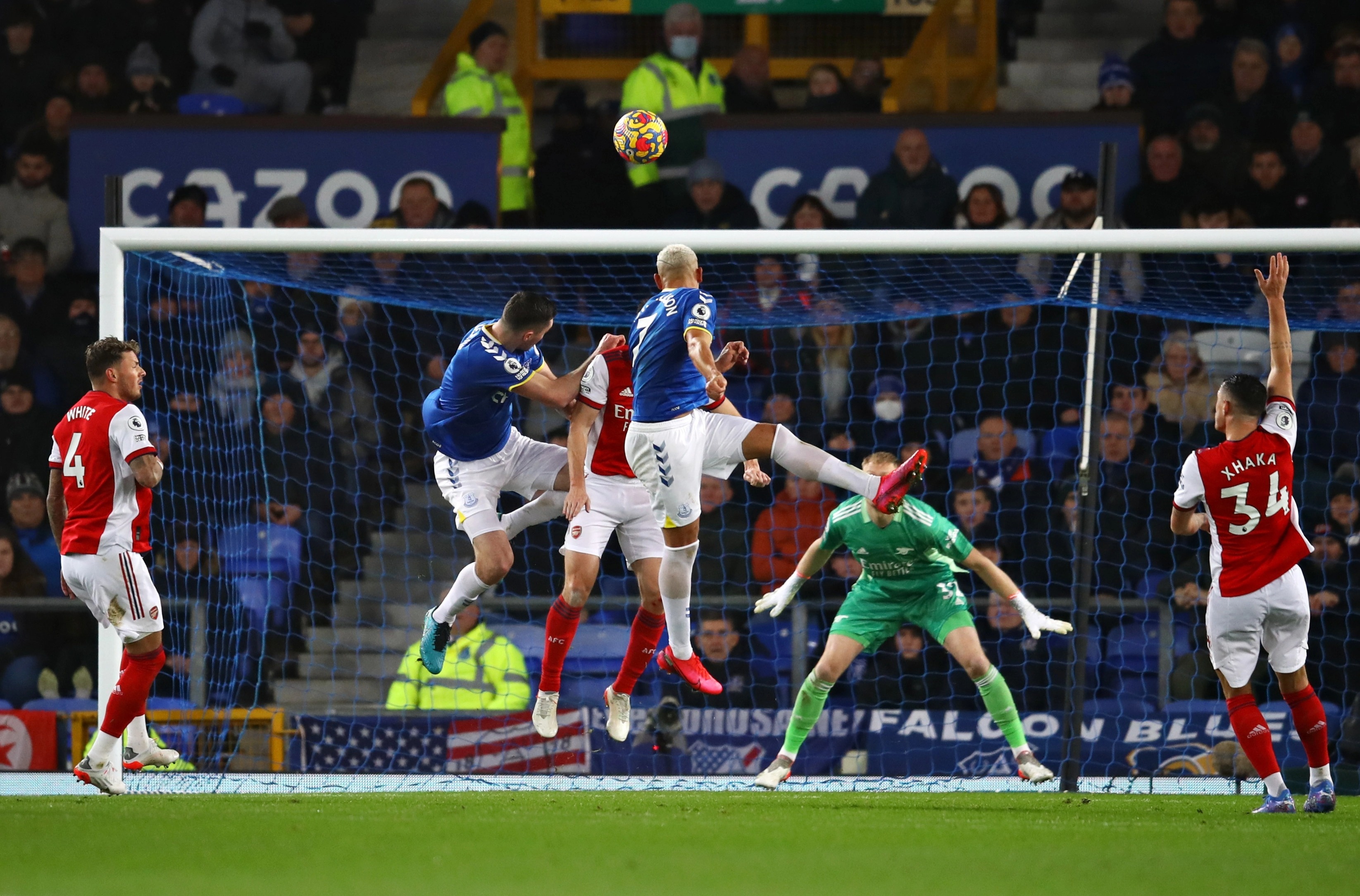 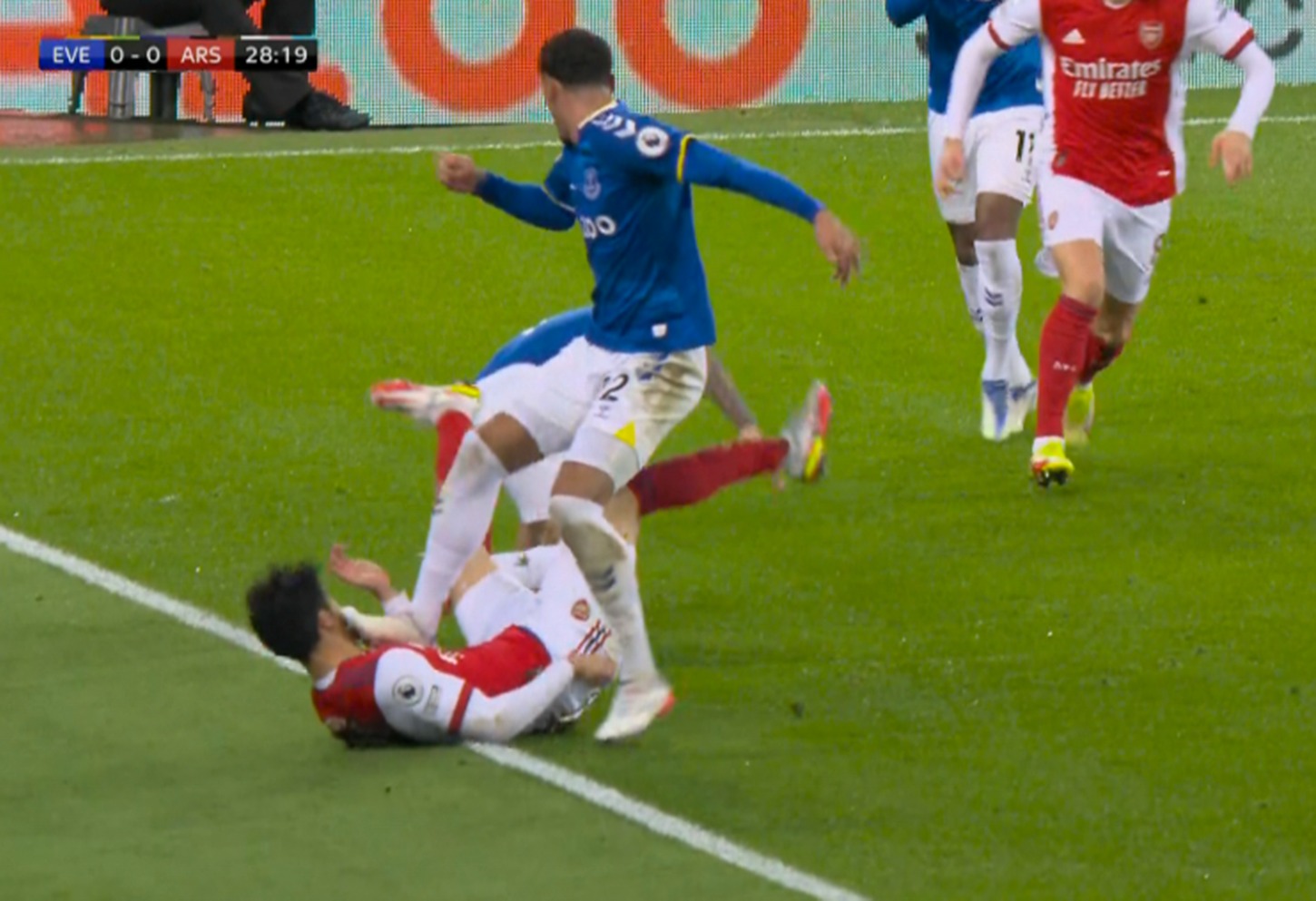 The planned mass walk-out for the 27th minute – to signify the number of years since the club had won a trophy – failed to materialise.

A couple of hundred fans headed for the exits as planned but those who stayed turned up the volume to show their support.

A few minutes later, Toffees defender Ben Godfrey could easily have been joining those who did leave early.

His stray boot into the face of Takehiro Tomiyasu looked terrible on the replays but the VAR – amazingly – decided it did not warrant any action.

Everton thought they had the opening goal just before the break as Andros Townsend whipped over a free-kick from the right.

Richarlison got there and flicked a header beyond Aaron Ramsdale but the celebrations were cut short by a VAR check which showed he was marginally offside.

And wouldn’t you know it, Arsenal went up the other end and scored a goal that did count.

Full-back Kieran Tierney got past Seamus Coleman on the left hand side and his cross was expertly guided home on the volley by Martin Odegaard. 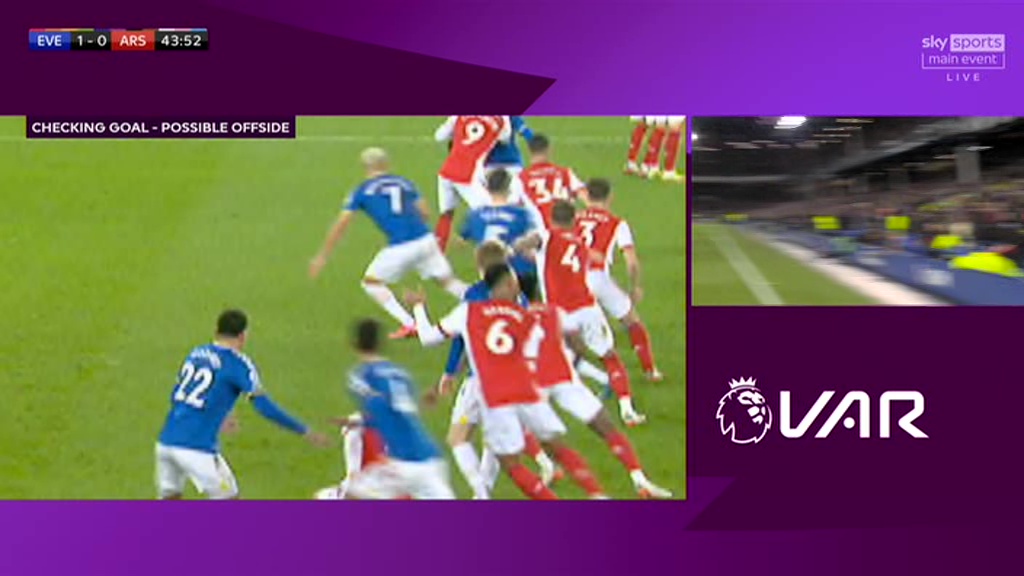 Richarlison was denied by a tight offside call in the first halfCredit: Sky Sports 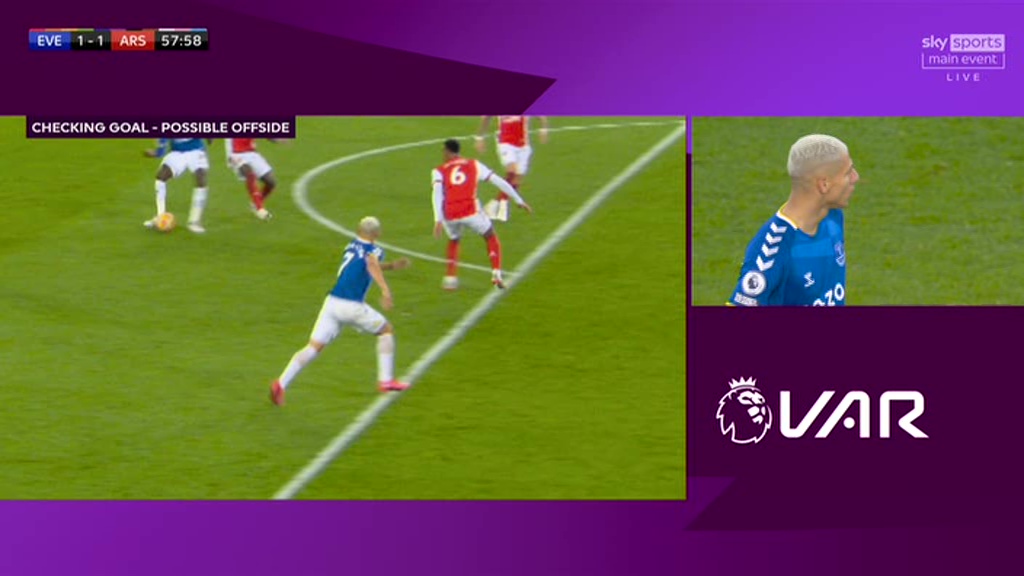 The Brazilian was again denied just before the hour markCredit: Sky Sports

The Norwegian threw away a point at Old Trafford on Thursday with a clumsy foul on Fred – but showed his quality here to make amends.

In truth it was a half time lead that flattered the visitors as that was their only serious attack of the first half – but that’s the way it is going for the Toffees right now.

Amazingly though, there was another twist for the home faithful.

Just before the hour mark Doucoure rolled a clever pass through to Richarlison who seemed to have held his run before beating Ramsdale superbly.

But again the joy was short-lived. The VAR had a look and this time the former Watford man was offside by millimetres – maybe by a toenail.

It was almost a real case of deja vu as Arsenal went up the other end and Gabriel Martinelli went round Pickford but chipped his effort onto the roof of the net.

Had that gone in it really would have been a kick in the teeth.

But credit to the Toffees for persevering. Gray’s shot from 20 yards was pushed against the bar acrobatically by Aaron Ramsdale.

Richarlison reacted quickest and looped a header back over the keeper – and this time it did count.

Even then, Everton could have been denied as Eddie Nketiah somehow put a point blank header against the post after great wing play by Bukayo Saka.

But the stage was set for Gray to pick up the ball on the left, weave his way past a couple of defenders before crashing an angled shot home off the post.