BARCELONA have a Cristiano Ronaldo headline stuck up in their dressing room to serve as a reminder to their players.

The extract is from Spanish newspaper AS and can be viewed by Lionel Messi & Co each and every day. 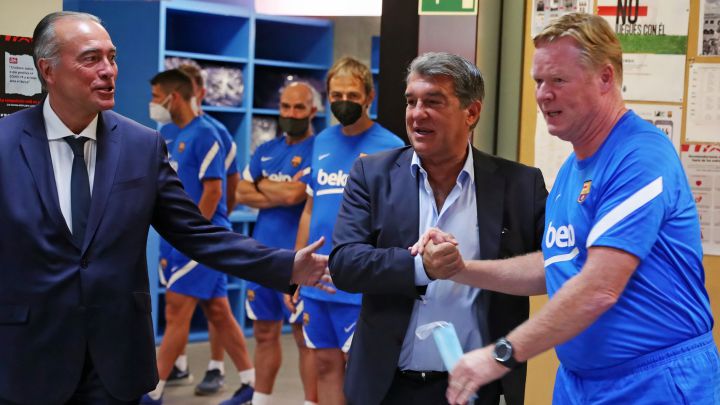 It reads: ‘Cristiano returns to test positive for covid 19 and is low against Barça’

Ronaldo, 36, was Barca’s nemesis in the years at Real Madrid.

But that hasn’t stopped the Catalans putting his name up in the dressing room.

Despite the intense rivalry, Barca are willing to use the Portuguese’s name to warn their players against breaking Covid regulations.

It translates to: “Cristiano returns to test positive for Covid-19 and is low against Barça.”

The purpose of having the name of their most feared and hated rival of the modern era is to remind the players even the athletes who look after themselves the most can catch the virus.

AS’s headline refers to Juventus’ Champions League group game against Barcelona in October last season which Ronaldo had to miss after testing positive.

Barca won the game 2-0 and they’re keen to ensure the message stays in their players’ heads.

Underneath the headlines additional warnings are given which read: “The competition is at stake.” And: “The rules are to be met.”

The Portuguese star has been linked with a move away from Turin with the club eager to offload his £900,000-a-week wages.

But Ronnie is reportedly set to stay but may have to take a pay cut like Messi.

He has just one year left on his deal at the Old Lady sparking interest from Paris Saint-Germain and Manchester United.

But talks are already in place for Ronaldo to stay for one more year – if Juventus can convince him to take a significant pay cut, according to Gazzetta.