The striker’s equaliser denied City a win in a clash which saw Jonas Eidevall cautioned for reacting furiously to a controversial moment leading to the hosts’ goal. 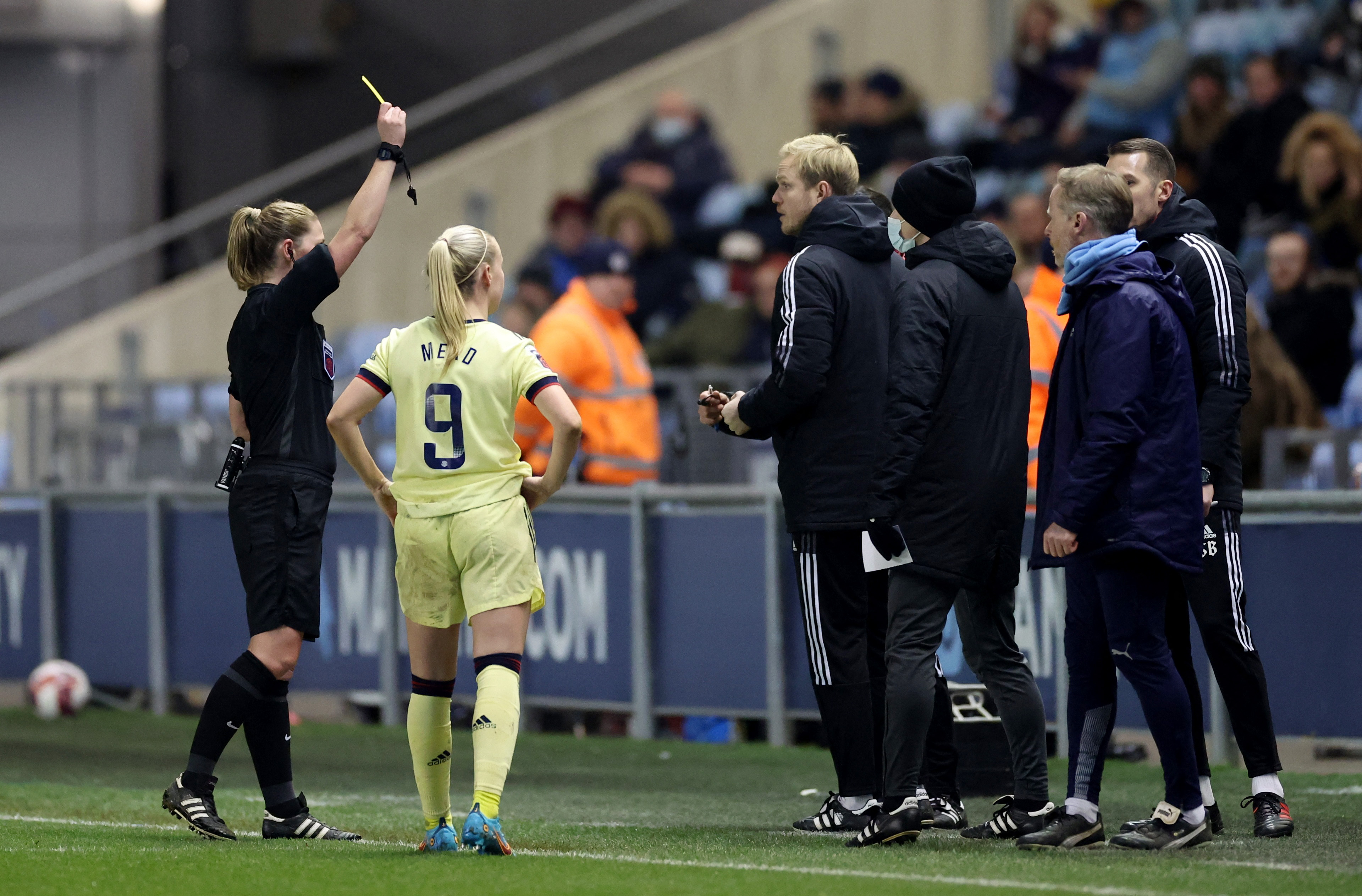 Jonas Eidevall received a yellow card for his reaction to the ball deflecting off the referee ahead of Man City’s goalCredit: Reuters

The Gunners chief was angered by the referee’s accidental role in the build-up to City taking a second-half lead.

A cross-field from Lucy Bronze hit the official before ending up at the feet of Demi Stokes in the lead-up to a Khadija Shaw goal.

Football lawmakers IFAB say play must be restarted if a referee makes contact with a ball, and it remains on the pitch and the team starts a promising attack.

Eidevall said: “I was not happy about that goal. You can clearly see that we stop playing.

“Games like this are going to be decided by small margins.

“Everyone is going to make mistakes, players, coaches and referees.

“If they’re going to be on Sky Sports refereeing matches, I think the referees should be given all the resources that they need to prepare and practice, that’s where we need to help each other in the football family.

“The only thing I’m always going to be an advocate for is to raise the things around it to give them the best possible conditions in football.”

Adding his thoughts, City boss Gareth Taylor said: “We’ve been on the wrong end of (situations like) that this season, on many occasions with refereeing decisions, so it was nice, if that was the case, that one went our way.

City made big some changes to their first 11 for the clash with Khadija Shaw starting in place of Ellen White.

But perhaps the biggest call was 17-year-old Khiara Kheating making her first start between the sticks in the top tie.

The teenager, seen as one of the club’s most promising prospects, had a nervy moment early on missing a chance to claim a long ball after a ninth-minute mix-up with Steph Houghton.

But the City starlet quickly settled and pulled off a string of assured saves including an impressive stop from Mead at the near post moments later.

The hosts had a decent chance to counter in the 22nd minute with Lauren Hemp breaking on the left and teeing up Jess Park who sent her shot over the bar.

And there was a minor spat near the half-hour mark with Hemp and Katie McCabe going into the ref’s book following the Arsenal dynamo’s tackle on the City winger. 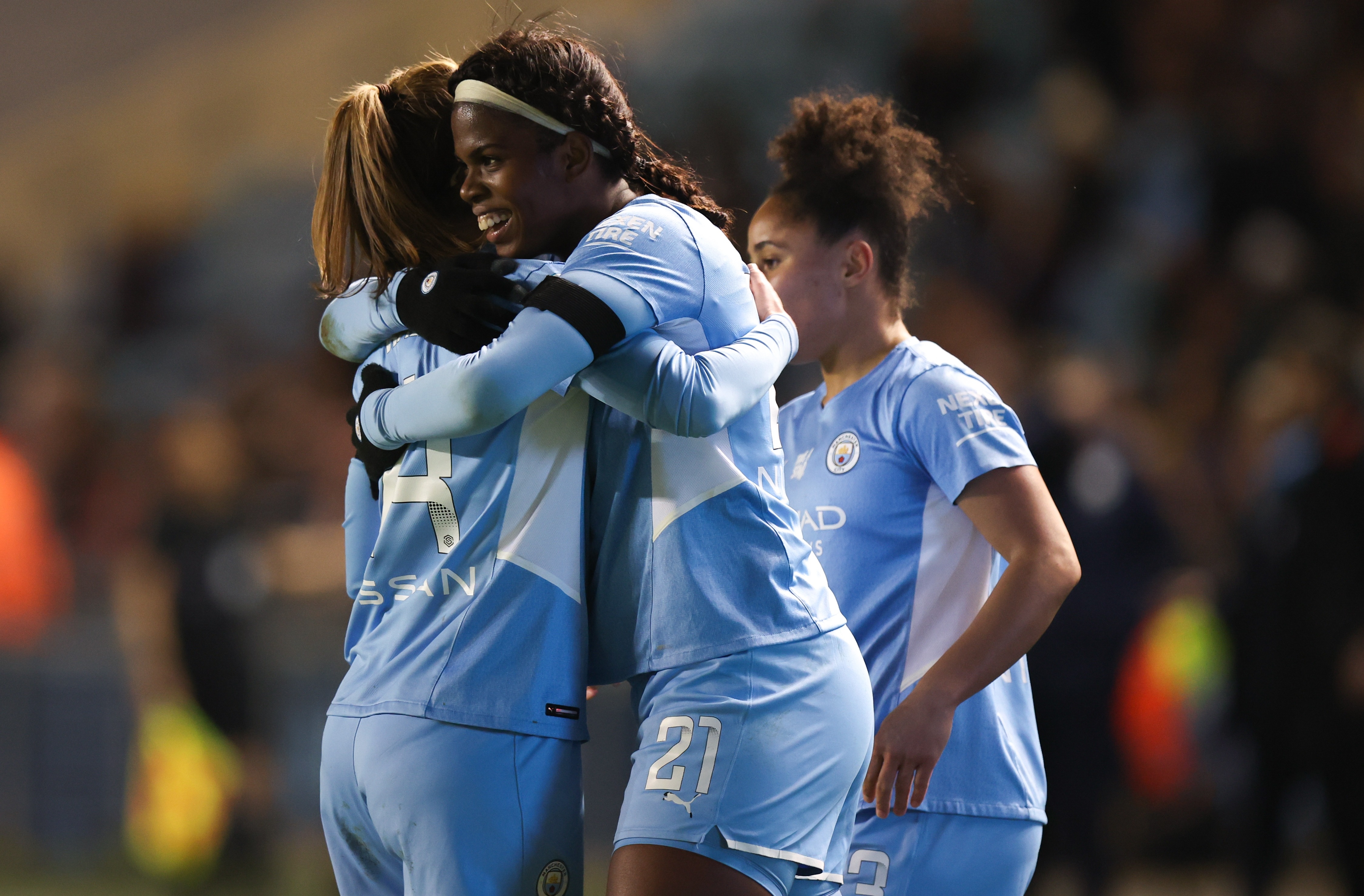 The second spell saw Leah Williamson withdrawn following the player receiving treatment in the first half.

And the change saw the Gunners’ newest signing Rafaelle Souza enter the fray and make her presence felt with some impressive marking of Shaw.

Arsenal had a chance to go ahead around the 52nd minute with Mead darting past Bronze and forcing a save from Kheating at the near post.

However, the league leaders were able to bounce back with Heath burying a bottom corner 92nd-minute effort to go two points clear at the top.

The result saw City denied the chance to leapfrog Tottenham to fourth with the race for top three getting tighter.

But it leaves them just two points behind third-placed Chelsea who have two games in hand. 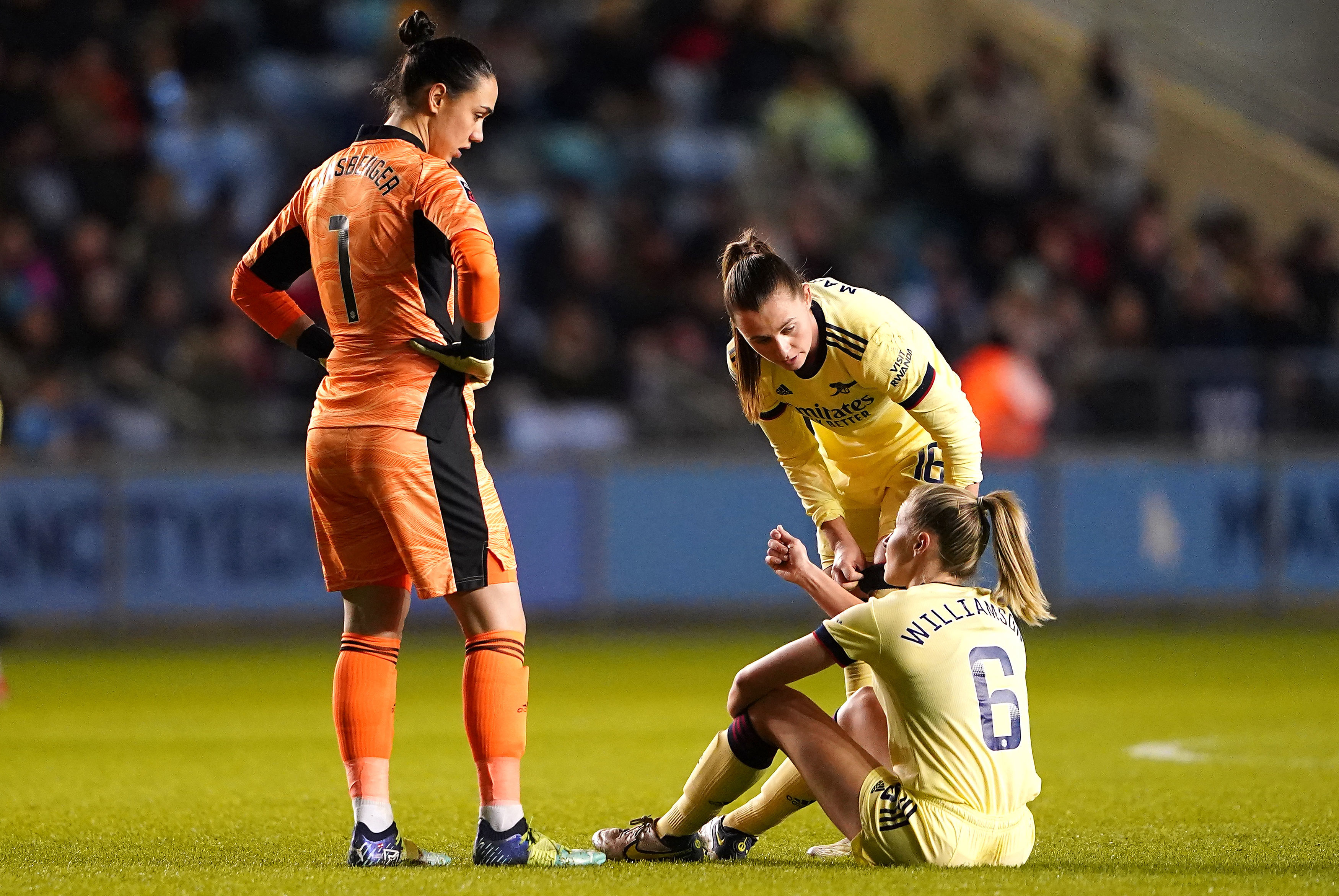 Leah Williamson came off at half-time following her recent return from injuryCredit: PA

Taylor said: “I’m really gutted for the girls because they deserved the win with the heart and the quality that they showed at times, but this is football.

“We’re stringing together decent performances and there are still elements to improve on.

‘I’m really proud of the team and the way they performed.”