Foden, Mahrez and Silva make it 17 wins in a row as City go TEN points clear

SO the rest of the Premier League can give up hope for Lent, then.

Manchester City will be crowned champions soon after Easter at this
rate, having extended their winning streak to 17 matches with a
smoking Ash Wednesday win at Goodison. 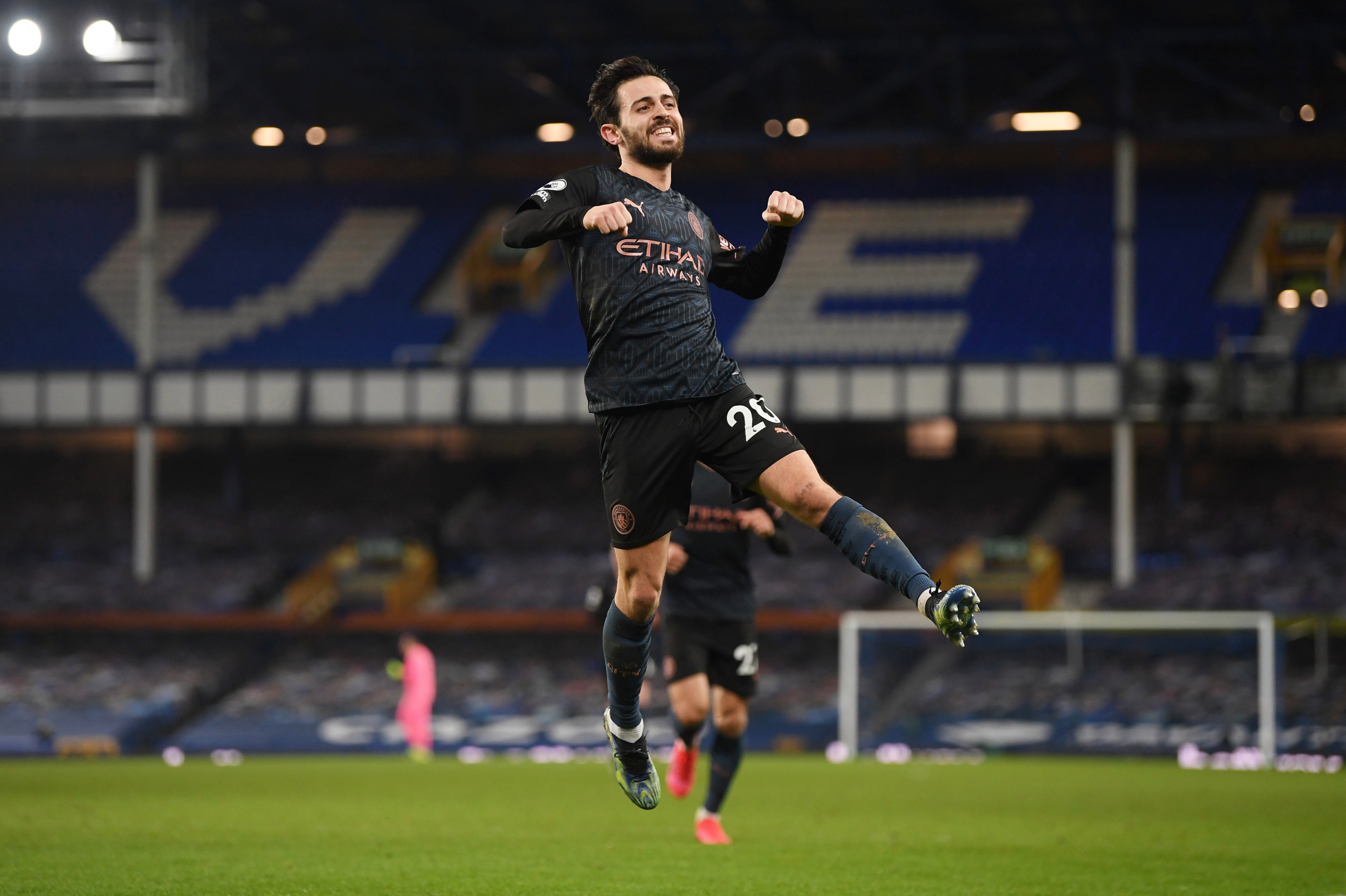 Bernardo Silva celebrates as Man City roar ten points clear at the top of the Premier League with a stylish win at Goodison ParkCredit: Reuters 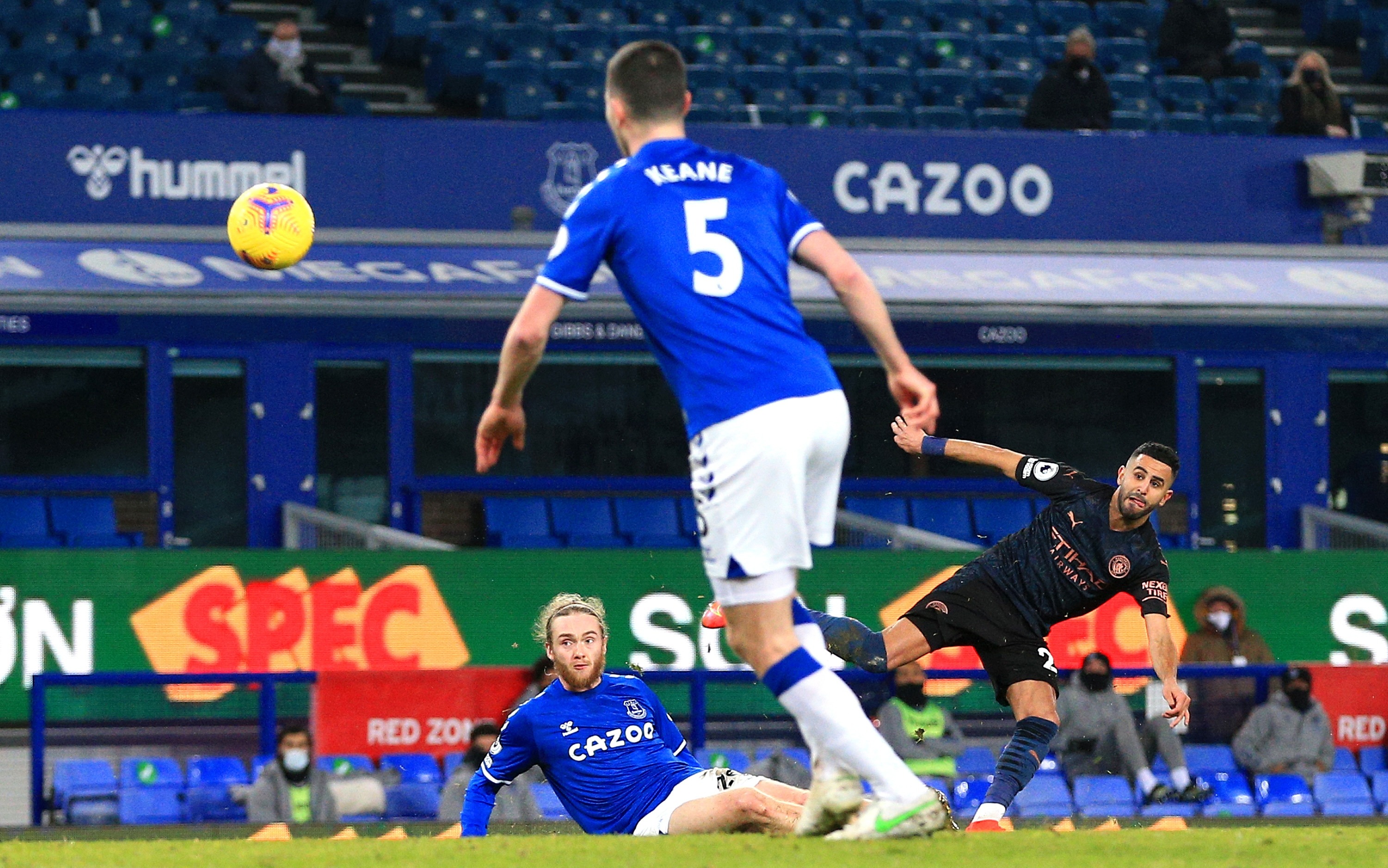 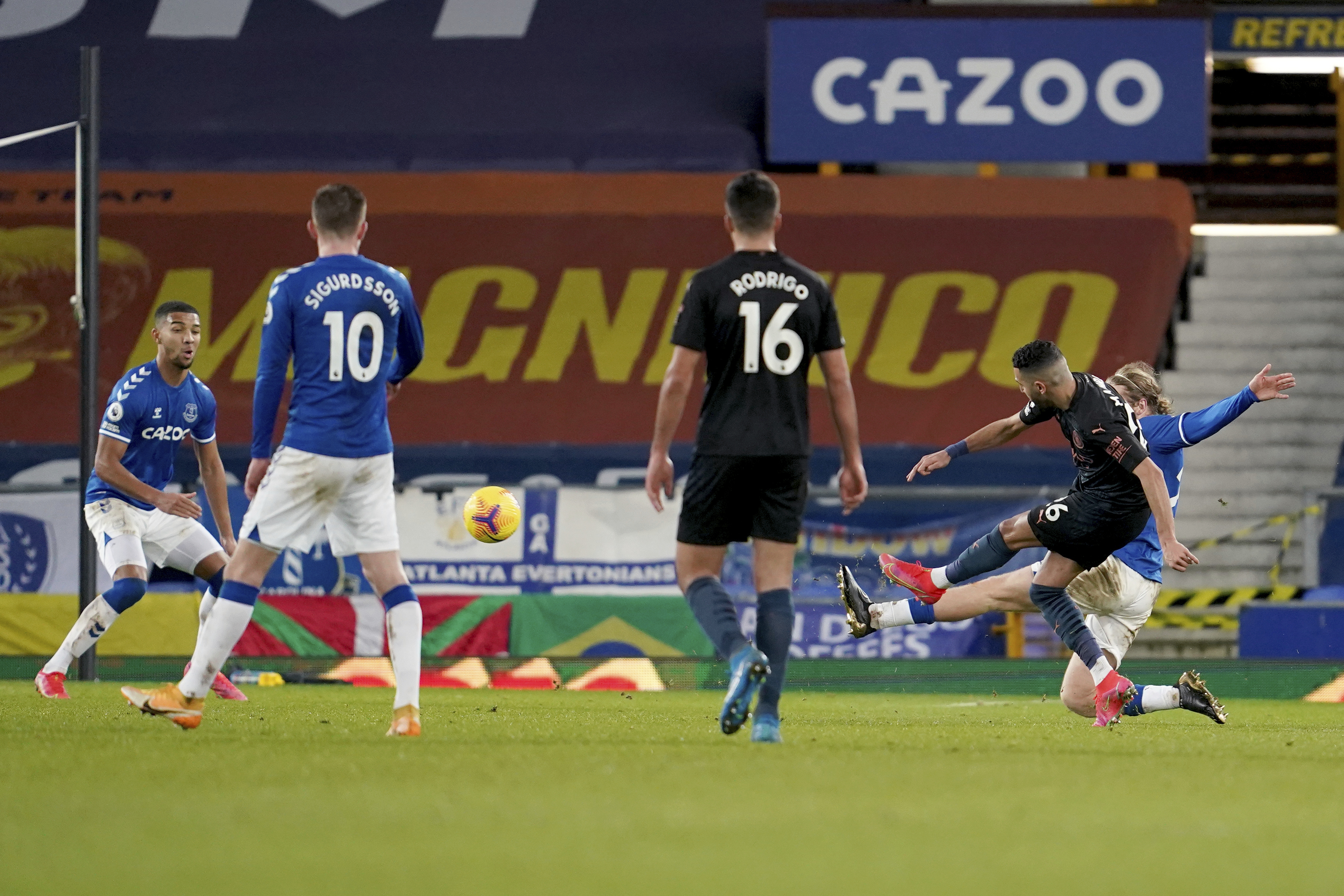 Riyad Mahrez brilliantly steers City back in front with the pick of the goalsCredit: AP:Associated Press

But even that didn’t shake them. With City, there is always a
masterstroke waiting to happen.

And this time it was Riyad Mahrez – a champion with Leicester as well
as Pep’s men – who got the easel out and gave us the Picasso moment
with an eyeball-pleasing winner.

It is debatable whether City’s current streak is an all-time record
for an English top-flight side – they actually won 20 in a row three
seasons ago, if you include a penalty shoot-out win in a League Cup
game.

But even when well-tested by a much-improved Everton, City were irresistible.

They come to Goodison again next month for an FA Cup quarter-final and
with an ailing Tottenham to come in the Carabao Cup Final, who would
bet against a second domestic treble in three seasons – when no other
English club has ever managed one such clean sweep.

Whether Guardiola can overcome his recent Champions League
shortcomings and go for the ‘Quad’ is perhaps less likely.

But this sort of consistency in a uniquely congested season is quite
extraordinary. 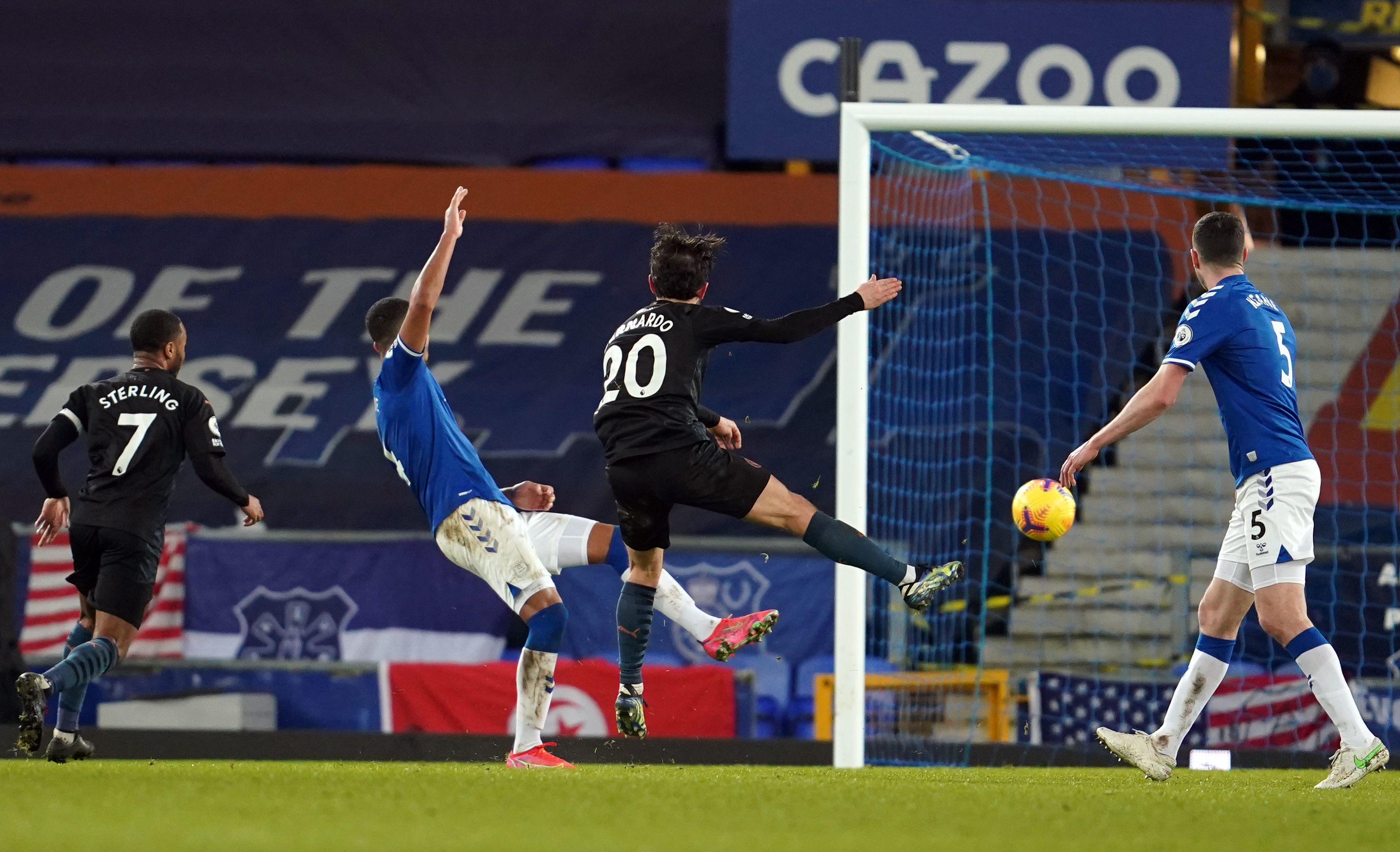 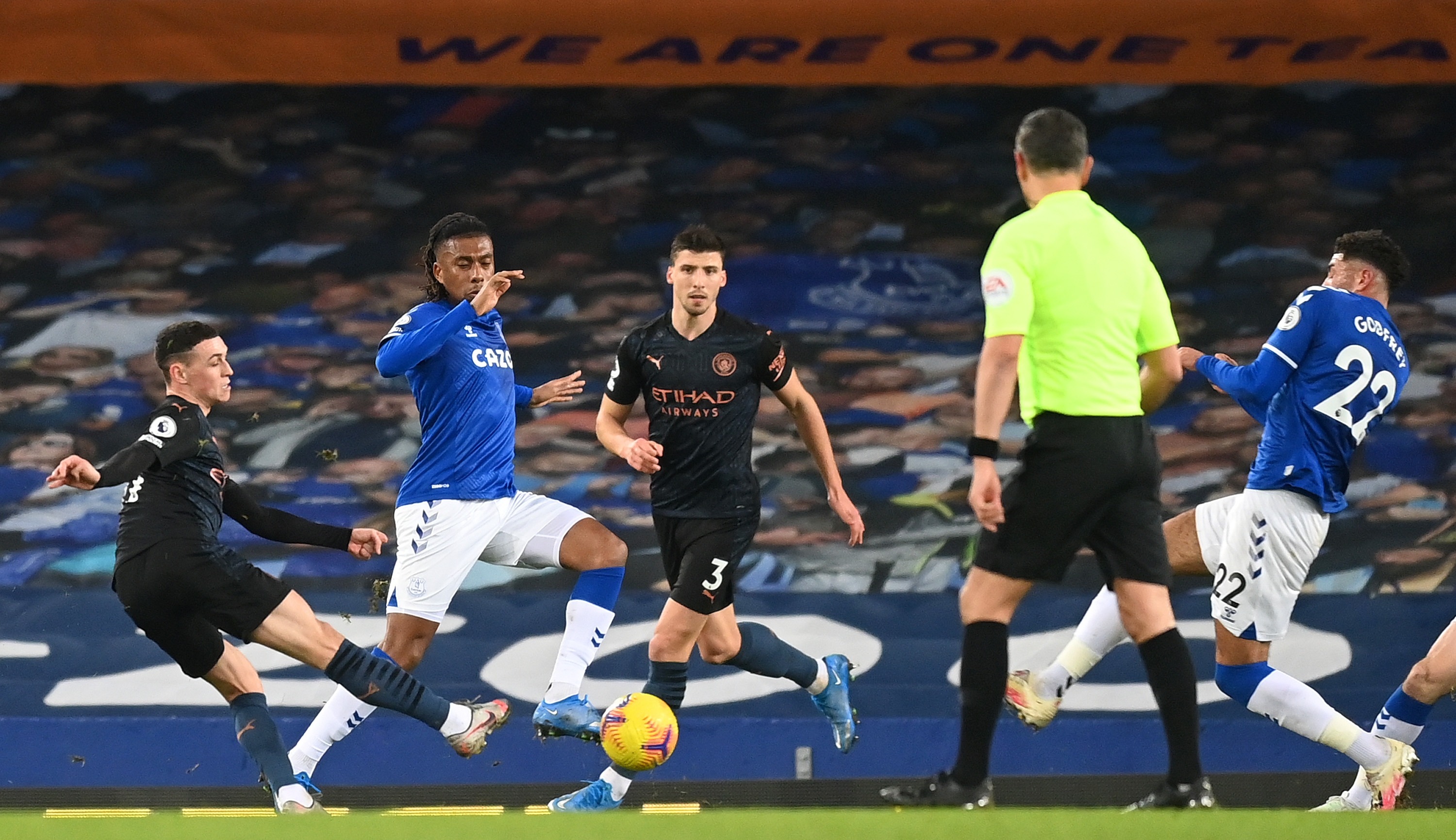 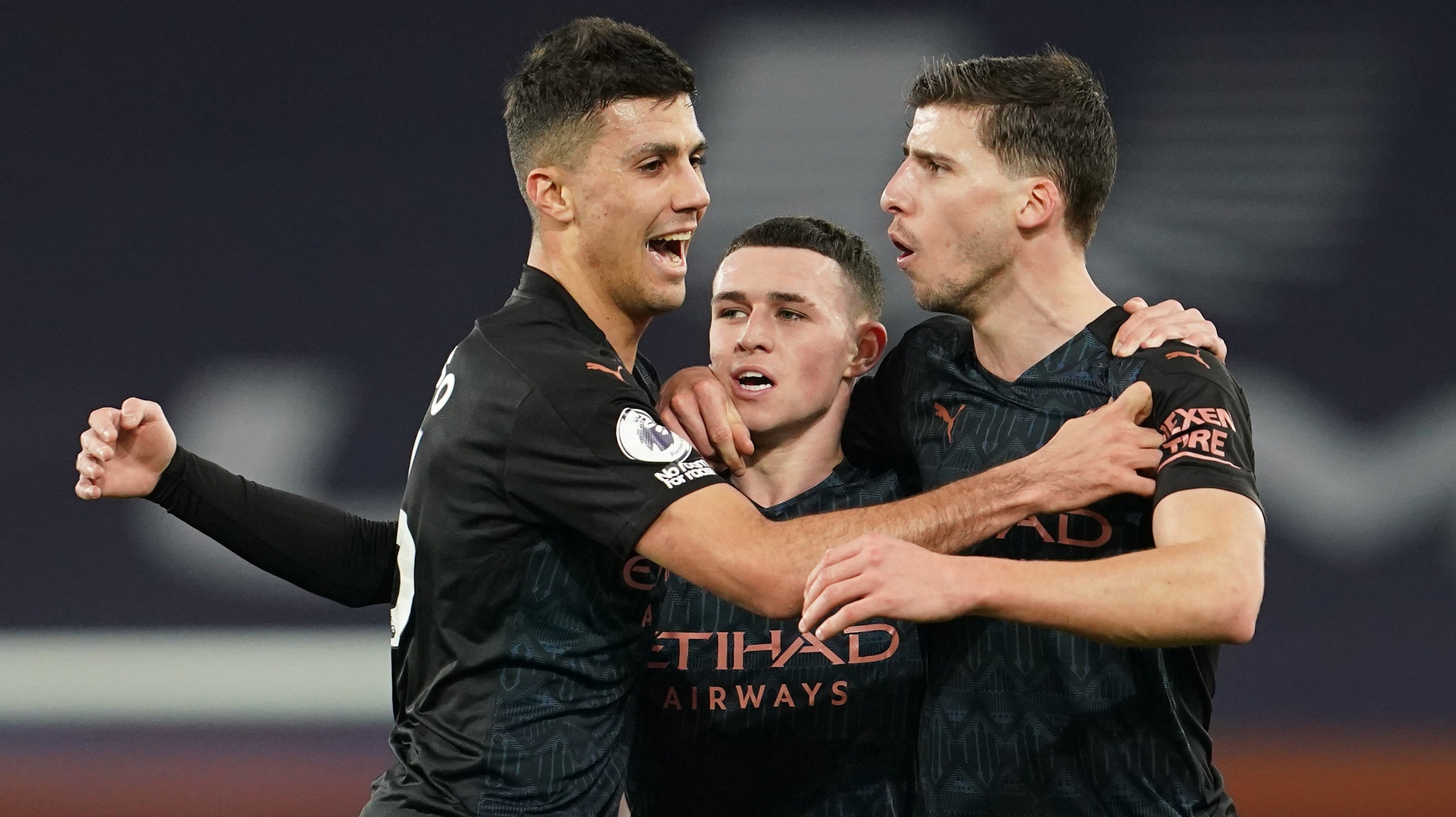 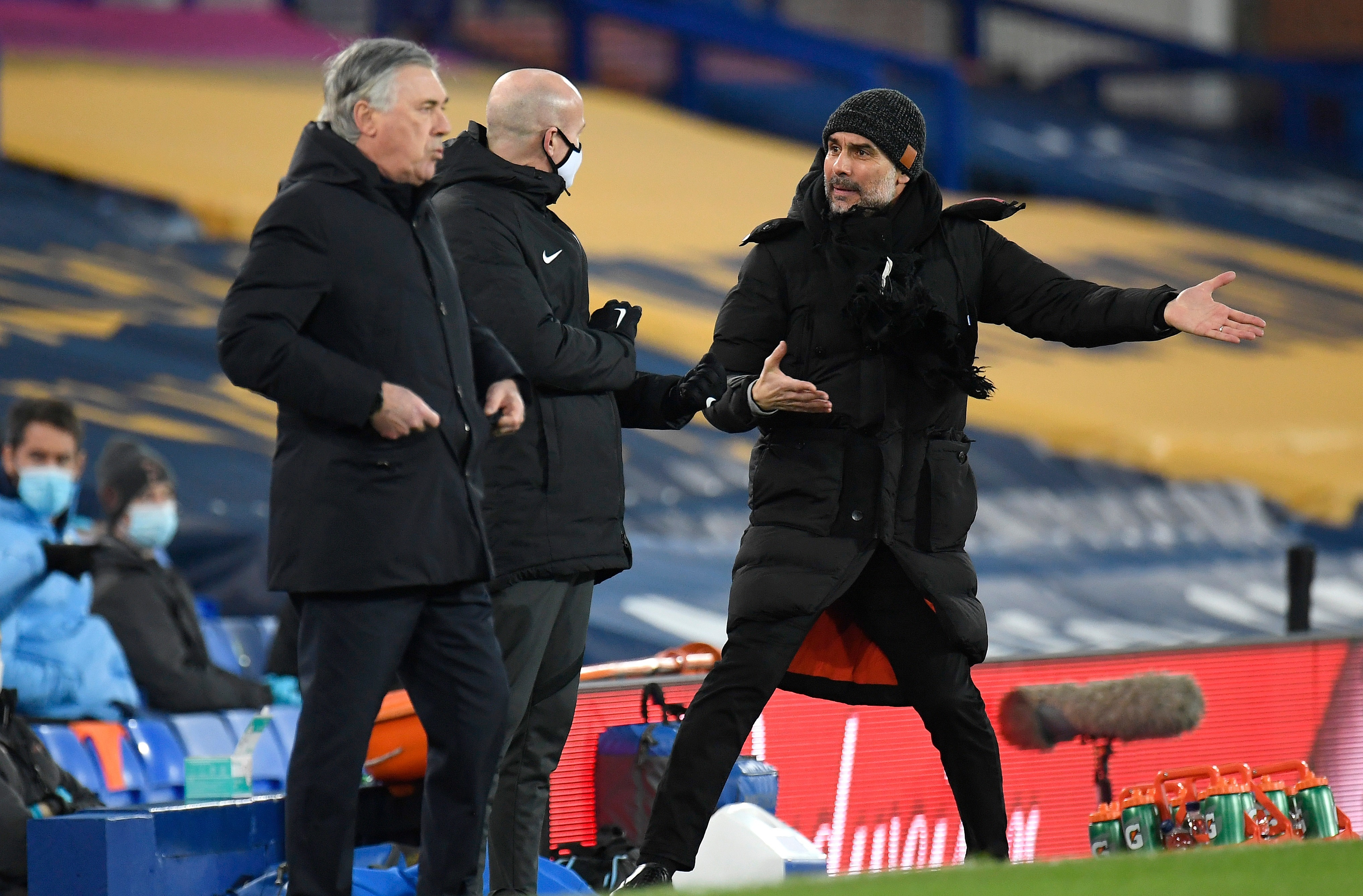 Kevin De Bruyne is back from injury now – returning as a late sub here
– and City have been an artful juggernaut even without their princely
Belgian.

Everton did not take it well when this fixture was postponed at late
notice on December 28 after a Covid outbreak at City.

At that point, City were yet to build up their head of steam and would
have seemed a far less formidable prospect.

Still, that’s pandemic football and City did produce one of the
performances of the season at Chelsea the following weekend, despite
having five players out because of  Covid.

Yet Guardiola had to do without his free-scoring midfielder, Ilkay
Gundogan – who had netted 11 times in 12 Premier League games but was
ruled out with a groin problem.

Stones and Dias, the laundrymen, had inspired City to an extraordinary
nine clean sheets in eleven league games – the two conceded being a
Liverpool penalty and an injury-time consolation for a well-stuffed
Chelsea.

Everton’s Champions League hopes had taken a battering during a run of
just one point from their last five home games and Ancelotti made four
changes from Sunday’s dismal home defeat by Fulham. 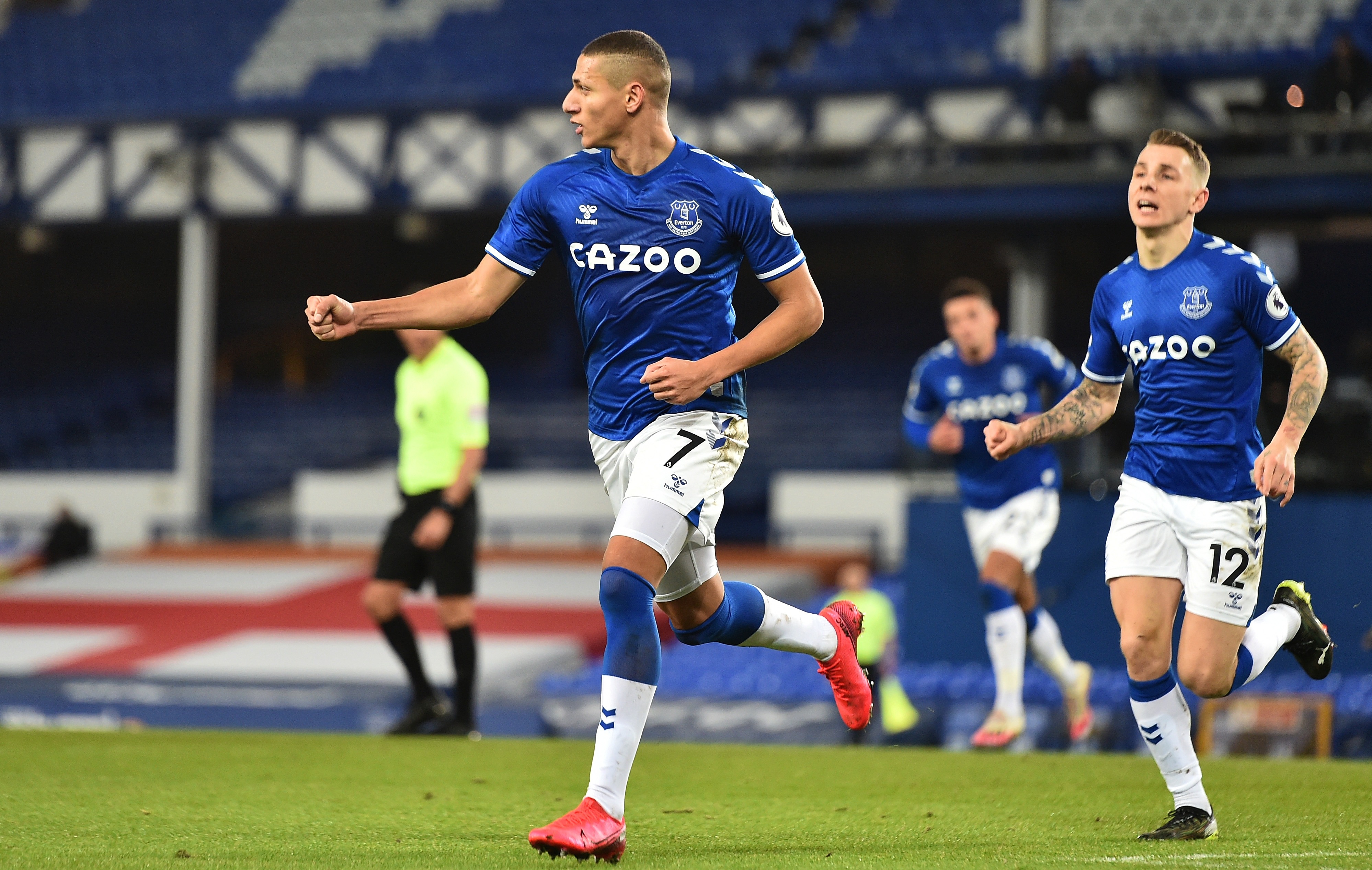 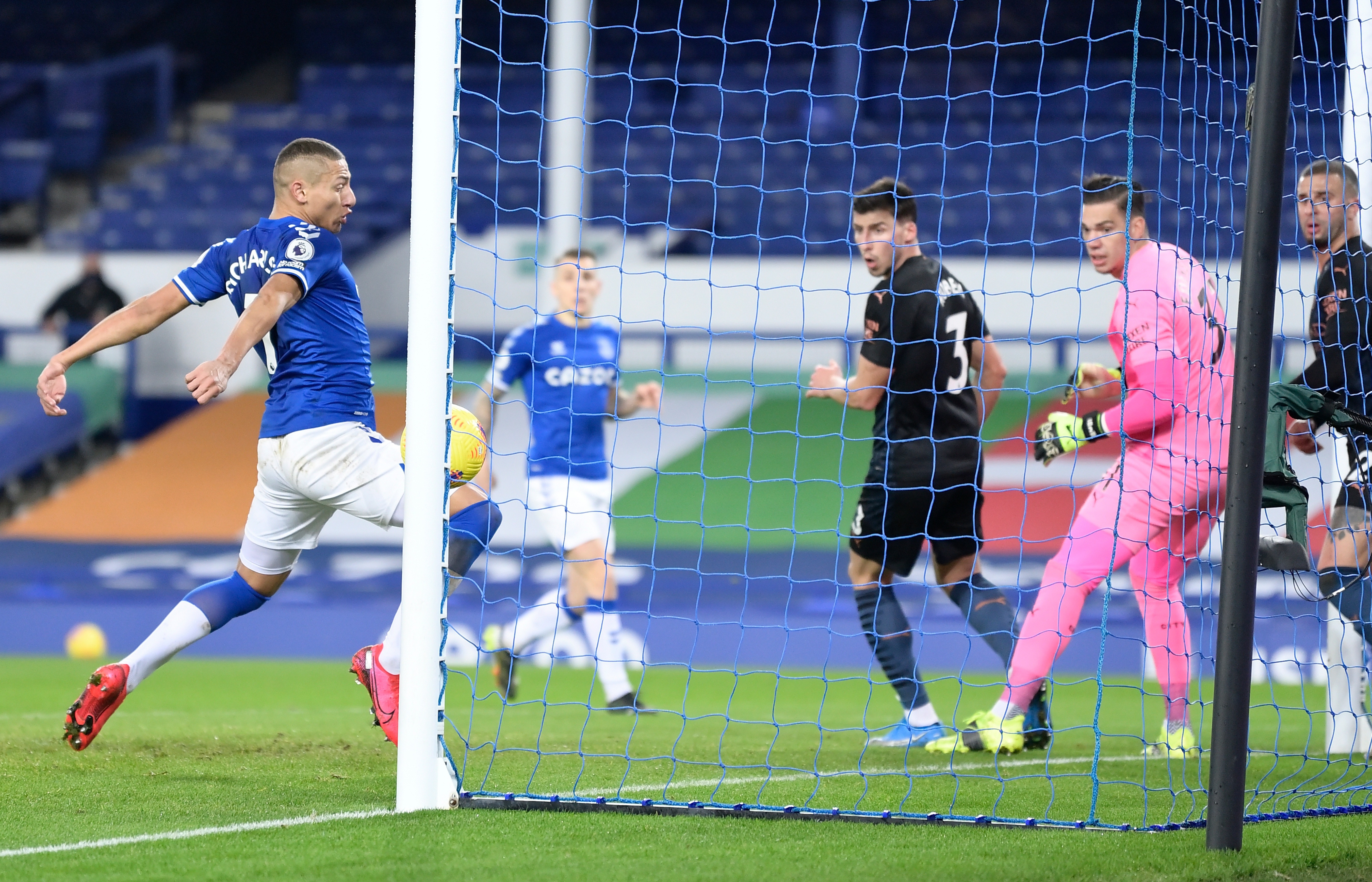 And one of those brought in, Yerry Mina was forced off with a calf
injury within 15 minutes.

If the task of facing City were not scary enough, Everton had to do so
without their injured 13-goal top-scorer Dominic Calvert-Lewin.

City started with a swagger. Joao Cancelo, who seems to spend the
entire match laughing at the pre-match graphics which place him at
left-back, soon sprang up in midfield.

He advanced on goal and produced a low curling drive which Jordan
Pickford did well to push away.

Gabriel Jesus was soon skinning Lucas Digne down the flank, then
almost getting a clear sight on goal before Michael Keane’s saving
tackle.

The opener, on 32 minutes, was not a City classic.

Mahrez bent in a left-footed cross from the right, Everton could only
clear as far as Foden, whose shot took a sharp change of direction
from the heel of Seamus Coleman, leaving Pickford with no chance.

Foden had been compared to both Lionel Messi and Zinedine Zidane in
the pre-match TV punditry – no pressure, son.

But while this was no act of genius, it was the Manciunian’s 13th goal
of a breakthrough season for club and country.

Everton had not been without attacking merit but had done little to
suggest a goal, yet within six minutes they were level.

Coleman centred for his fellow full-back Digne to drill in a
half-volley which cannoned off the post and ricocheted in off
Richarlison, an innocent bystander.

How do you score against a defence as good as City’s? By accident, it seems.

Foden, the cheeky little sausage, almost plucked a volley out of the
heavens, forcing a save from Pickford.

After the break Bernardo Silva drilled one goalwards, forcing the
England keeper to smell the turf and push it away. 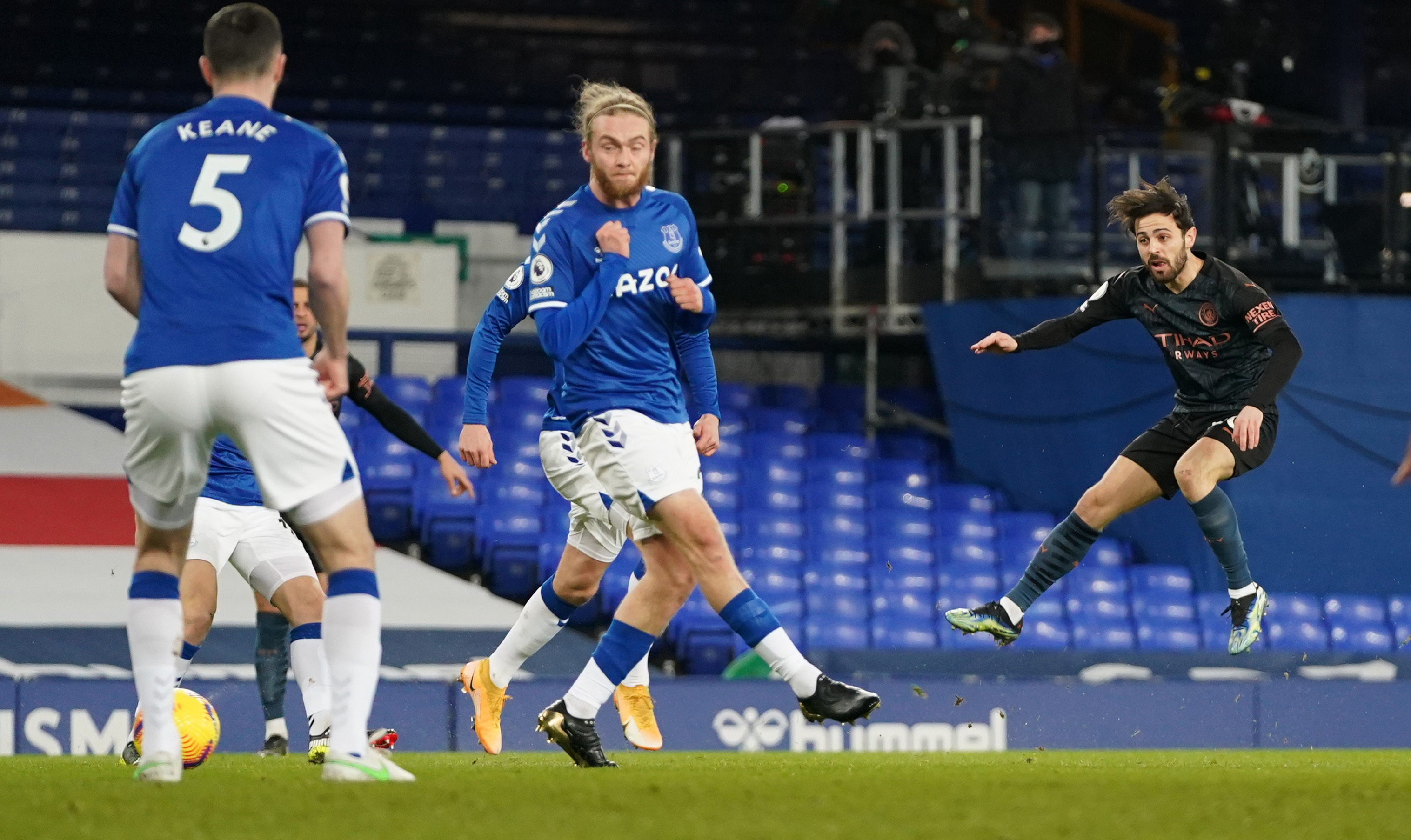 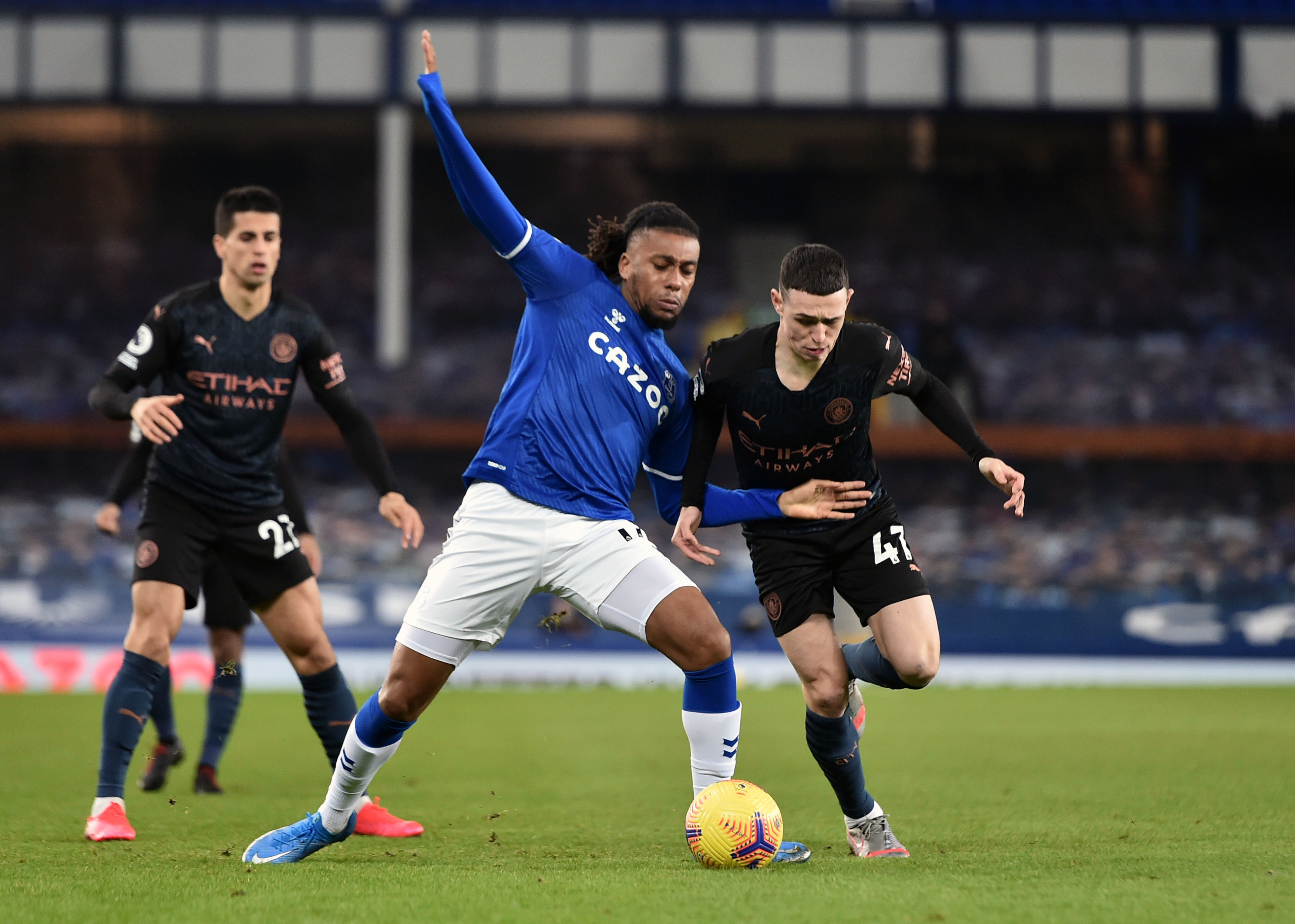 Then it was Kyle Walker’s turn to head into midfield, a diagonal pass
releasing Jesus who drilled into the side-netting when he should have
targeted the far corner.

Everton had been competitive in defence, occasionally promising in
attack – far better than in Sunday’s poxy showing.

But on 63 minutes, Mahrez delivered what he had been threatening all
evening – collecting a pass from Bernardo Silva, stepping inside and
dreaming up a shot with an hourglass curve, which pinged in pleasingly
off the far post.

City sealed with a delicious third – Mahrez to Jesus to Silva who bent
it past Pickford.

It looks like being a procession now, they are on a different plane to the rest.