CHELSEA fans know what they are getting with Mason Mount or Antonio Rudiger.

But Hakim Ziyech remains something of an enigma even though he has been at the club for more than a year now.

Hakim Ziyech could be like a new signing for ChelseaCredit: Getty 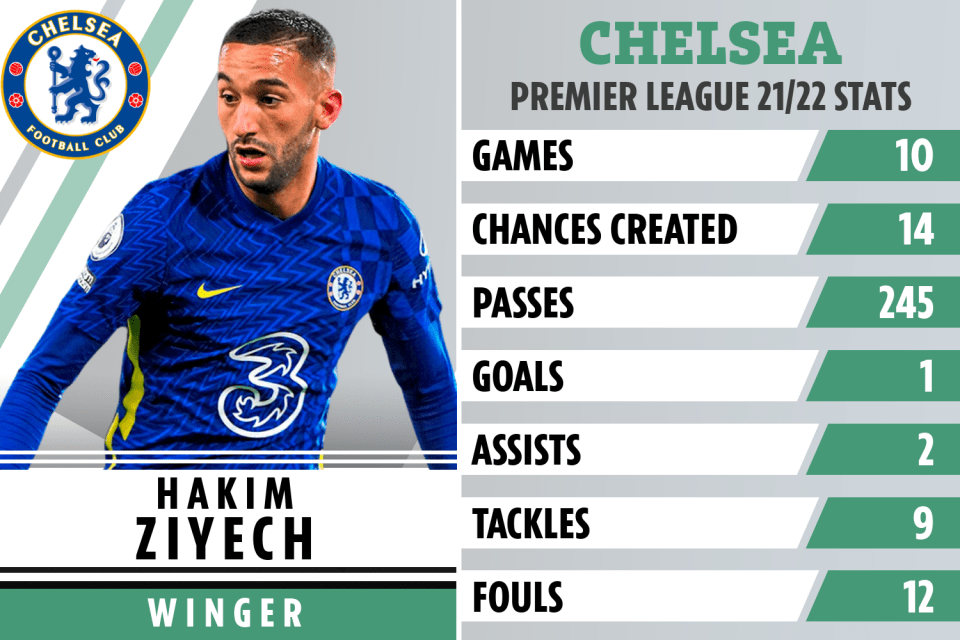 With only four complete matches out of 19 appearances under his belt this season, the waspish winger looks the classic bit-part squad player.

When you watch him produce the kind of performance he did against Tottenham on Wednesday it only raises questions about life for him at Chelsea.

The number-crunching boffins tell us that the Moroccan star produced six crosses and 30 passes from 56 touches of the ball.

One of those was the free-kick which forced Japhet Tanganga into the calamitous error that sealed Chelsea’s 2-0 win.

A pinpoint delivery of a cross with his impressive left foot that caused havoc in an admittedly shaky Spurs defence on the night. Ziyech gets an official assist for that.

Another was the shot straight at keeper Hugo Lloris which should have made it three-nil.

In between, there were skilful dribbles, laser-like through balls and a glimpse at what the forward who was inspired by Brazilian legend Ronaldinho and Zinedine Zidane can do.

There is genuine hope among those who enjoy watching a relative physical lightweight run rings around bulkier players, that the coming weeks will give Ziyech a bigger showcase.

In normal circumstances, Ziyech would be in Cameroon now, preparing for his country’s African Cup of Nations opener against Ghana on Monday.

But a bitter feud with national team boss Vahid Halilhodzic led to him being ditched from the squad and he remains on Chelsea duty.

Ziyech, 28, is fully available for Chelsea and this could be the perfect time for him to shake off his image as an impact sub, or as a player who can only produce in fits and starts due to his physical limitations in the brutal world of the English game.

He came off the bench to score the winner at Watford as he did just before Christmas to bale out his team on a forgettable night.

He has a reputation among his peers as one of the most creative forces in European football.

Ziyech played on the right side of midfield against Spurs when he is naturally left-footed. Yet still he was one of the most influential players in the game despite being parachuted onto the wrong side of the Stamford Bridge pitch.

His motto is ‘don’t be afraid to fail’. He said as much in a revelatory profile interview with Chelsea’s own website.

Brought up in The Netherlands, he draws much from the Dutch approach to football, with great technical ability combined with nimble athleticism.

In a month when the transfer window is open and there are those screaming at their clubs to do business, Ziyech could become like a new signing for Chelsea if used more consistently.

And above all else, he is a joy to watch. Big up to the little man.