I bear in mind 4-4 Arsenal draw 12 years in the past prefer it was yesterday and I guess Tottenham followers do, too

THEY say you never forget your first time — and that will always be the case with me and the North London derby.

It may be some 12 years ago now, but I still remember it like it was yesterday. 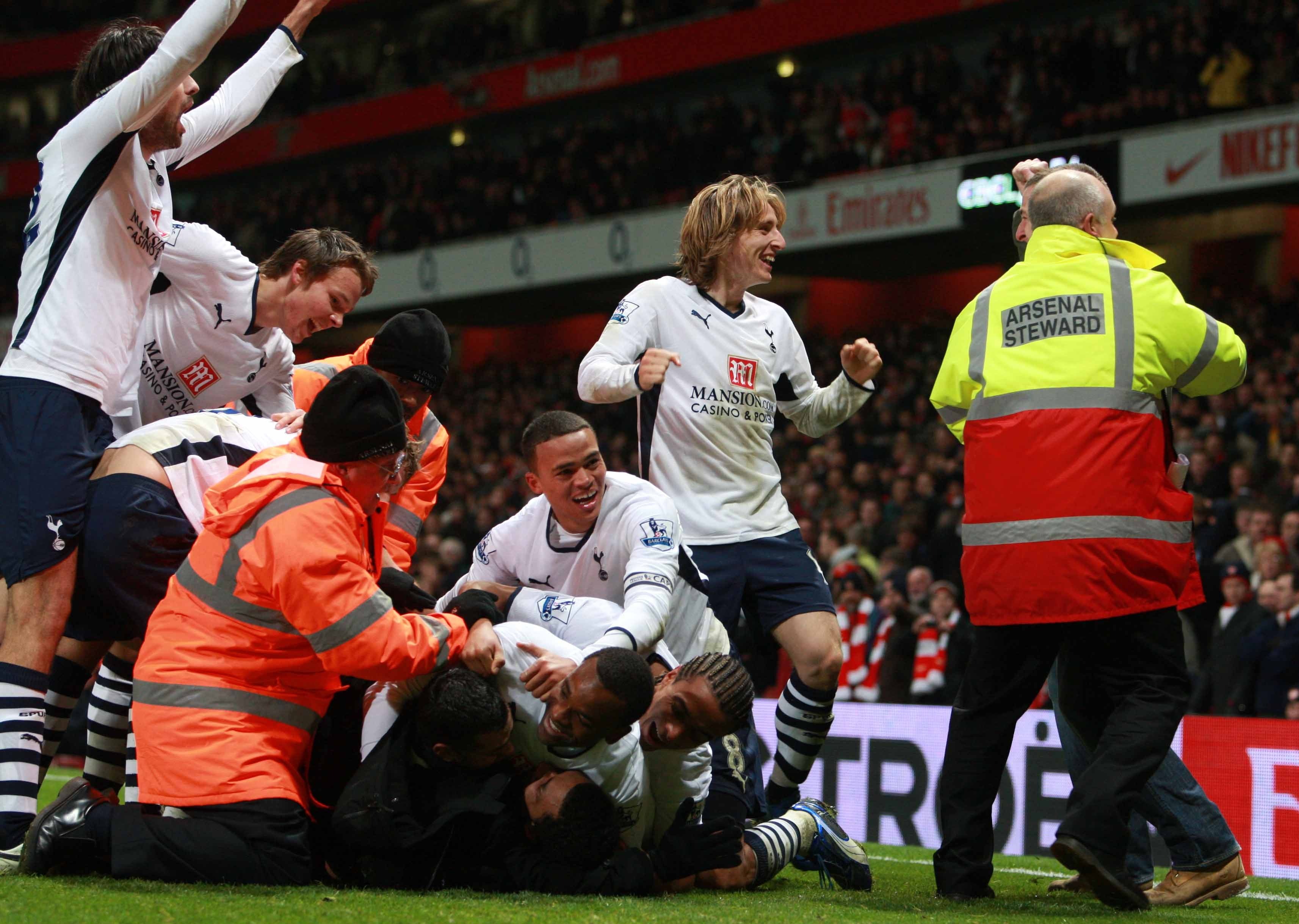 Tottenham rescued a dramatic late 4-4 draw against Arsenal at the Emirates in 2008Credit: Rex Features

I imagine every Tottenham fan inside the Emirates that October night in 2008 does too.

I’d only been appointed four days earlier and although we played — and beat — Bolton 24 hours later, the game at Arsenal was basically my first in charge.

So what better way to become a hero to your new supporters than beating your biggest rivals?

Although with a minute or so left, it didn’t look like the flying start I was dreaming of.

We were 4-2 down and if there was going to be another goal, you’d have had a decent bet on it coming from Arsenal.

Plenty of the Spurs fans thought so, too, because a lot had left, rather than hanging around to see Arsenal supporters celebrating.

But when Jermaine Jenas pulled one back, a load of fans who were off home then charged back up the steps again and saw Aaron Lennon equalise for 4-4 with seconds left in stoppage time.

That dressing room was better than plenty of winning ones I was in and it gave me the perfect platform with the supporters — a fantastic night. 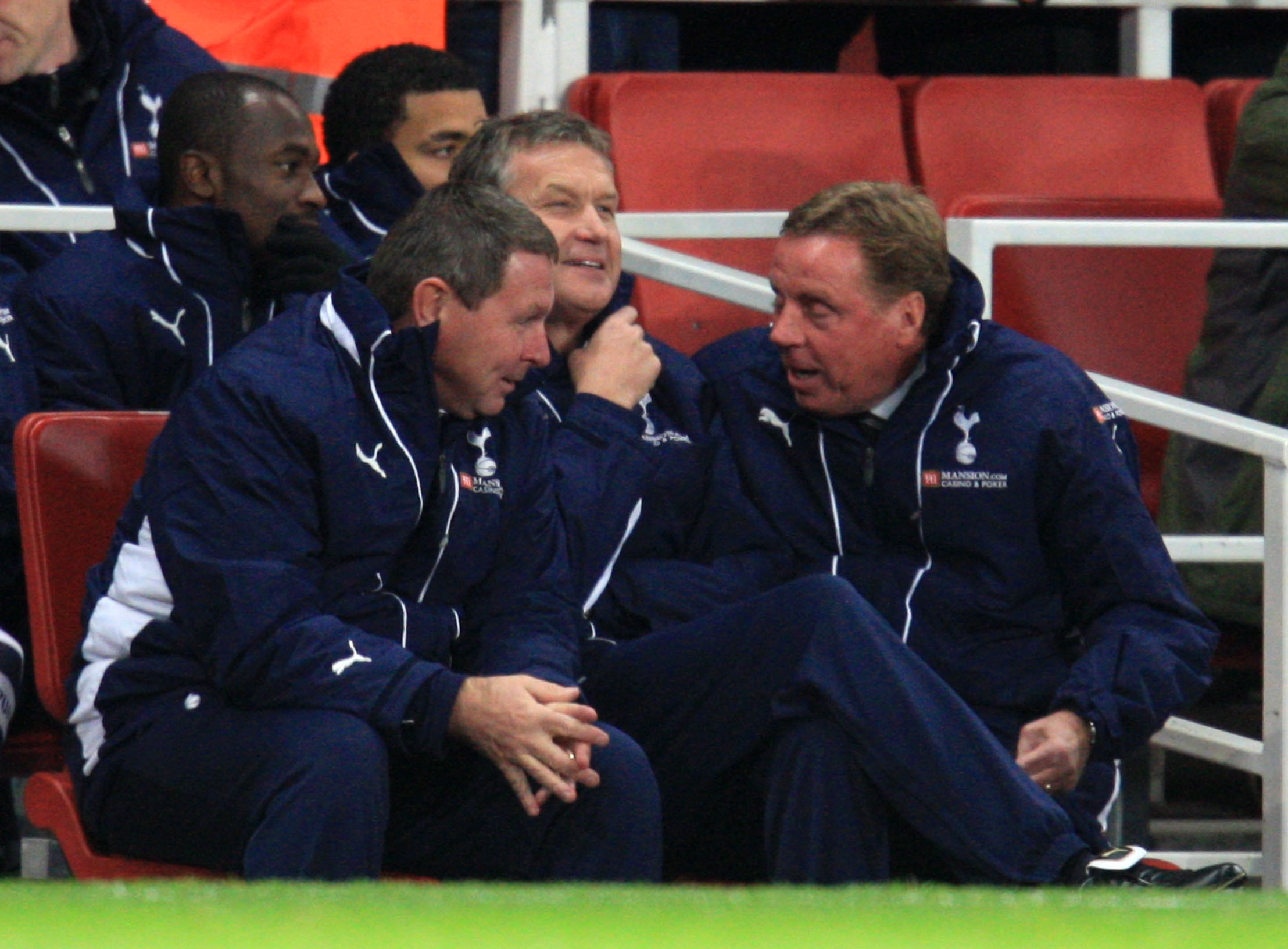 Harry Redknapp had only been in charge at Spurs for four days before the North London derbyCredit: Rex Features

People forget but David Bentley scored a worldie too, just like Danny Rose did on his debut when we beat them at our place the next season.

Whether you’re a manager, player, fan, anyone, there’s nothing like winning the local derby. And I had some great days in many of them over the years.

So I know exactly what it will be like for Spurs and Arsenal today — and it will be a long old week for whoever loses.

Mind you, whatever the fans may think, it’s certainly nowhere near the nastiest and scariest derby I experienced.

Without doubt that one is Portsmouth against Southampton — especially if, like me, you’ve left one club and taken over as manager of the other two weeks later!

That’s what I did in 2004 and you can imagine how that went down. 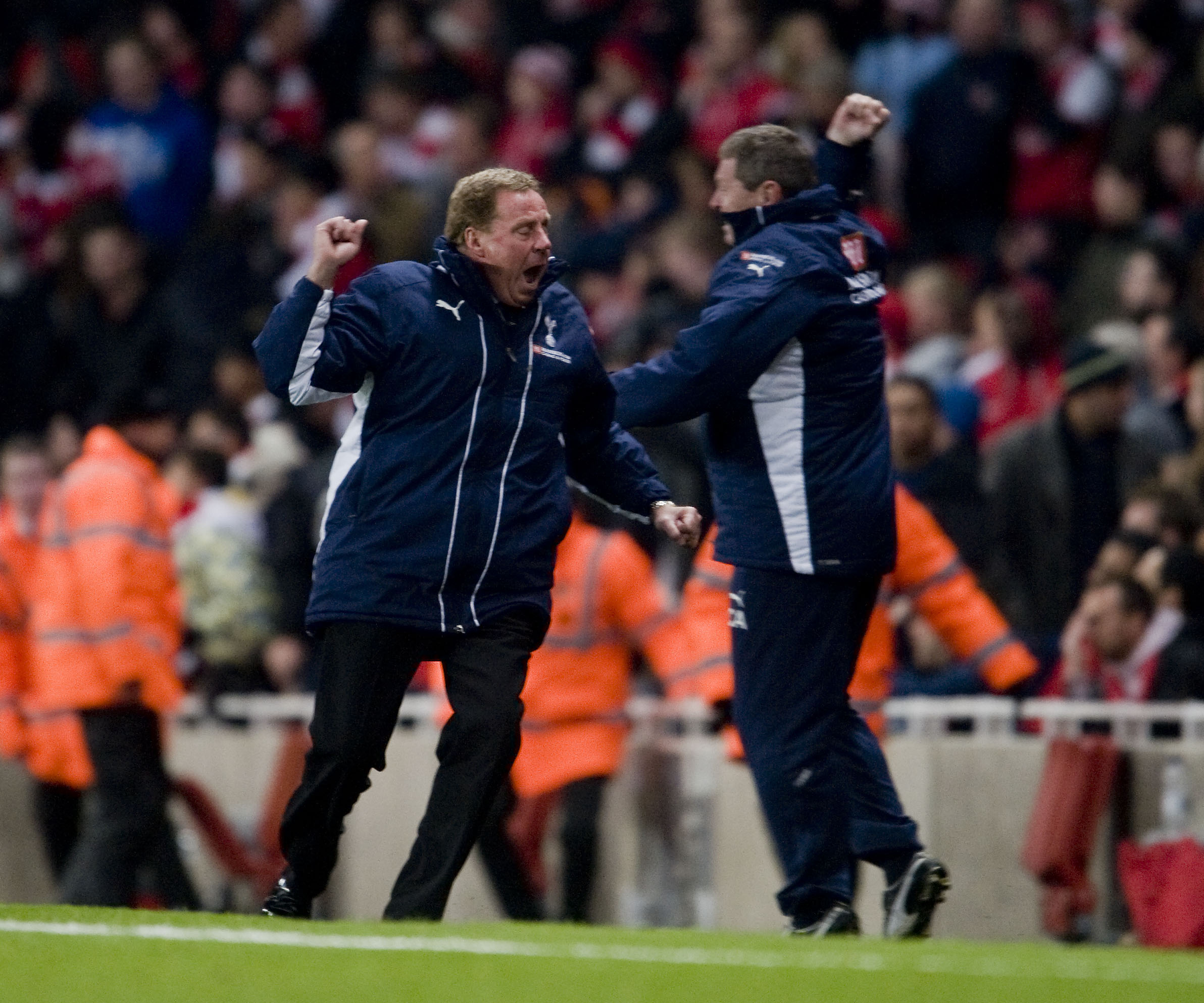 The ex-Spurs boss celebrates an injury-time equaliser after fighting back from 4-2 downCredit: Times Newspapers Ltd

So I couldn’t believe it when, six weeks later, we were drawn against each other in the FA Cup.

At least my new Saints team were at home rather than at Fratton Park — I’ll come to that in a minute — so that was something.

But as it went on and it was 1-1, all I could think of was ‘Will someone please score, even if it’s Portsmouth, so we don’t have to go there’.

With a minute or so left, we got a penalty and Peter Crouch of all people picked the ball up and I’m screaming on the touchline ‘No, not him’.

I just didn’t fancy Crouchy as a penalty-taker and the way he looked across, he knew it.

Fortunately he scored, saved us from a replay, and still reminds me of it.

It meant I was saved from going back to face the Portsmouth fans at Fratton Park until late in the season . . . and what a day that was. 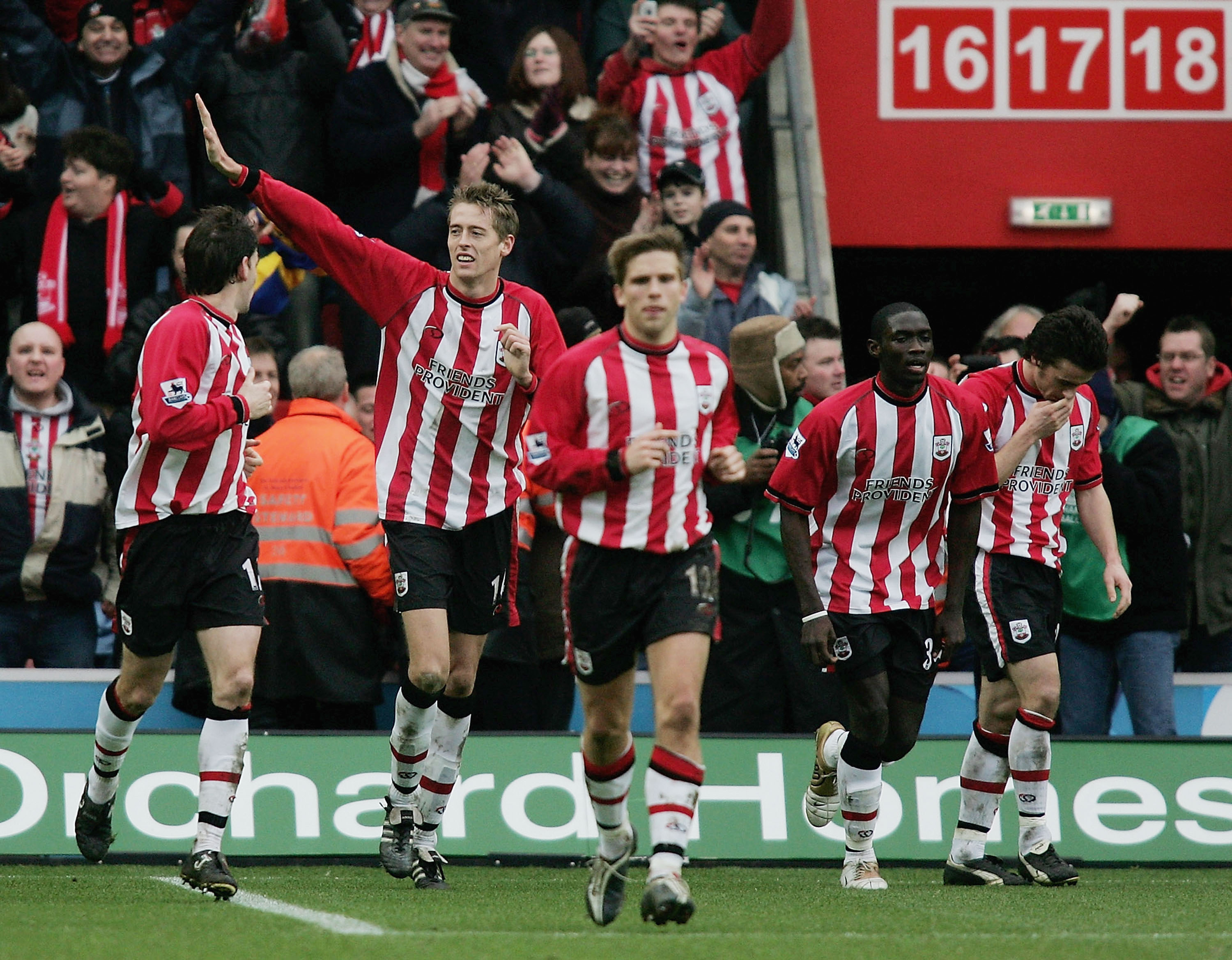 Peter Crouch scored the winner from the sport for Harry Redknapp’s Southampton against PortsmouthCredit: Getty Images

Those Pompey lads are a tough breed and you certainly wouldn’t want to argue with them. When I went to manage the team they hated, the abuse was incredible.

It was frightening and on the day Southampton went to their place, I had four SAS boys on the coach for protection and a helicopter following us all the way from our training ground.

When the players came back in from the warm-up, I could honestly see fear in their eyes. It wasn’t pleasant.

They smashed us 4-1 on the pitch, so you could say they won that one — although they did forgive me when I went back as Pompey boss a year later and we ended up winning the FA Cup in 2008!

That, incidentally, is the example of a small horse winning the race. Certainly nothing like Jose Mourinho claimed Spurs are recently.

Have a look at the players in his squad and there is no doubt Spurs are absolute thoroughbreds . . . and they will be right in the thick of it.

Harry Winks can’t even get in the squad at times and he’s an England player.

Dele Alli comes off the bench and scores in Europe in midweek.

There’s Ben Davies, Matt Doherty, Davinson Sanchez not getting a start — and I’ve not even mentioned Gareth Bale.

I’ve said all along they could well be champions this season — but if they don’t manage that, I’ll be amazed if Tottenham don’t win a trophy of some kind. 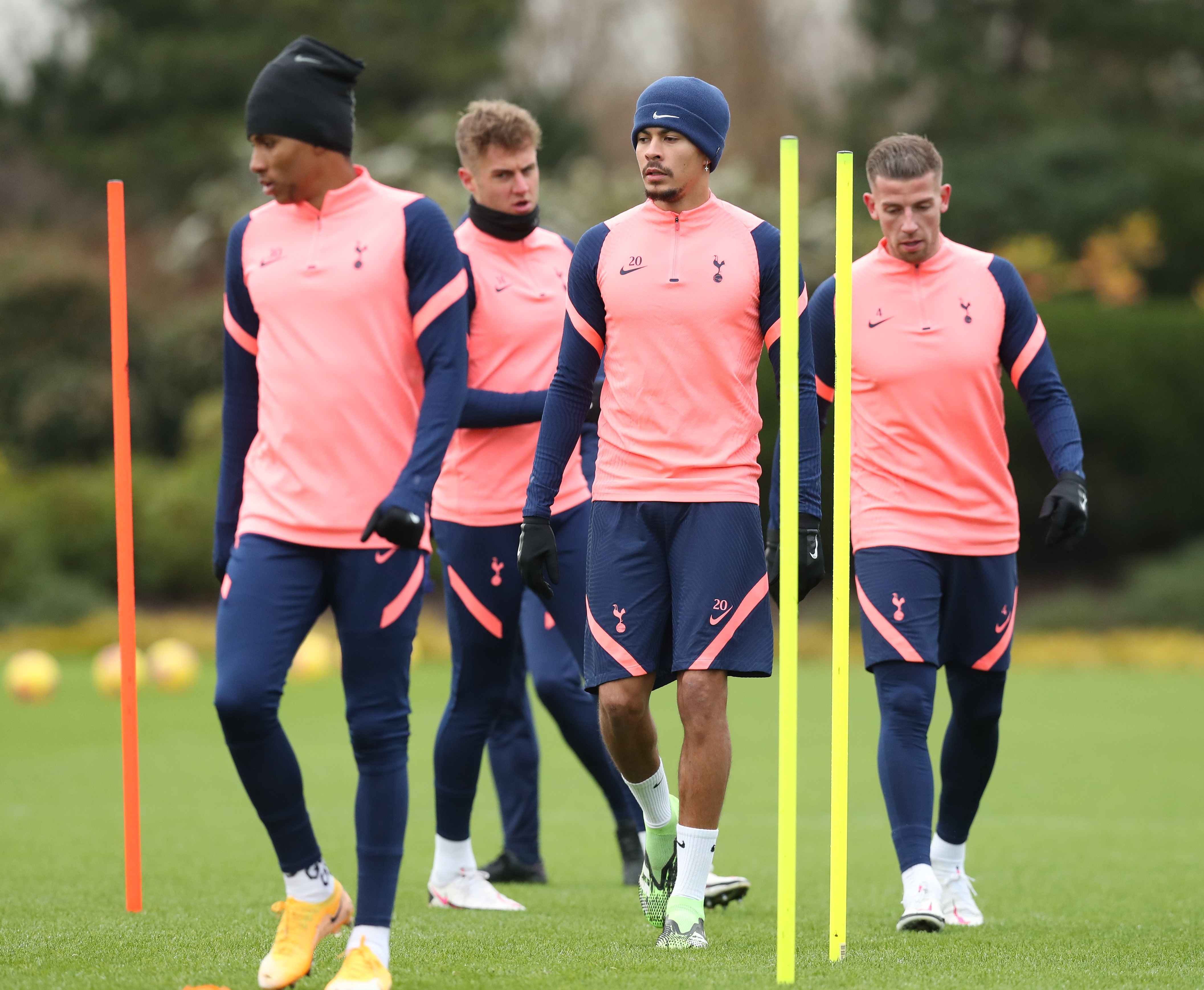 Mikel Arteta has a long job ahead of him with Arsenal and I think their only hope this afternoon is to have a go.

I would always try to win the derby rather than avoid defeat, because to do that is just inviting pressure.

And can you honestly see them keeping Harry Kane and Son Heung-min quiet all day?

I can’t — just like I can’t really see anything but a Spurs win.

MY grandson Bobby is a big Chelsea fan and when I picked him up from football training the other night, he was asking me “what do you reckon in the Leeds game, pop?”.

I said: “Never mind that, have a look at the 1970 FA Cup replay between those two and tell me what you think.”

He called it up and couldn’t believe what he was seeing. Even by the standards of the time, some of those tackles — if you can call them that — were ridiculous.

I still say that Leeds team under Don Revie is one of the greatest ever . . . but they were champions when it came to dishing it out as well.

OLE GUNNAR SOLSKJAER got flak for not taking Fred off the other night when he’d already been booked and was lucky to still be on the pitch.

But it wasn’t the Manchester United boss who let the side down against Paris Saint-Germain on Wednesday, that was down to the player. 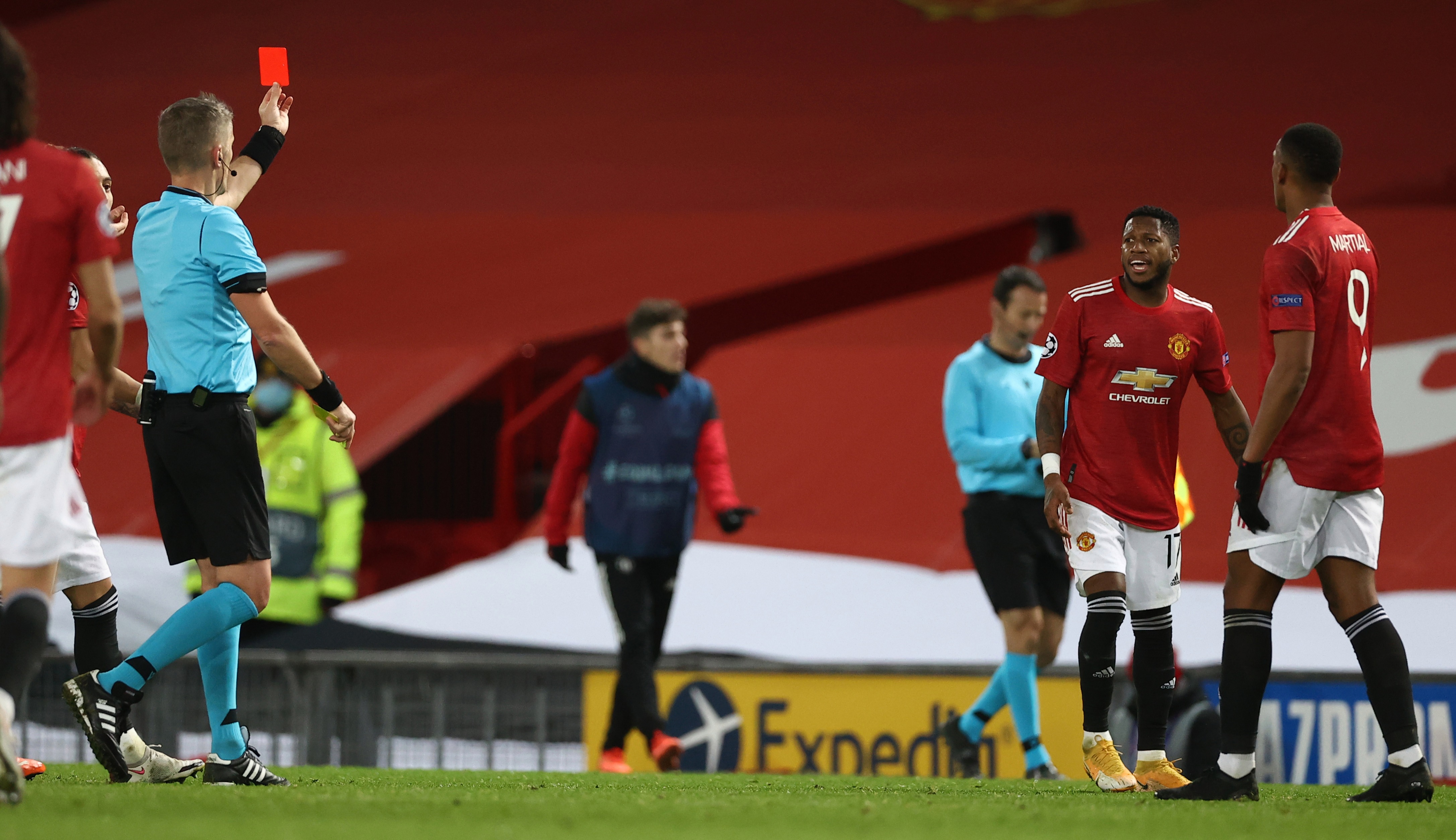 Fred was sent off for Man Utd against PSG in their Champions League loss midweekCredit: News Group Newspapers Ltd

Ole will have read him the riot act at half-time.

He’ll have told him “don’t do anything stupid, show some control and be careful”.

Maybe it was a harsh second booking, but he has to use his head the right way and not give the ref a chance to show another card.

He trusted the player and got nothing back.

It’s the same players all the time, that’s what annoys me. Steven Gerrard and Frank Lampard would charge around making tackles and weren’t in trouble every week.

In his last eight games Fred has had four yellow cards and one red . . . how stupid is that? Some people just never learn.