JESSE LINGARD scored a double as he made a dream debut to Hammer Aston Villa.

Watched by England boss Gareth Southgate, the 28-year-old reminded the nation why he was a Three Lions World Cup star not so long ago, as he made a mockery of Manchester United’s decision to discard him. 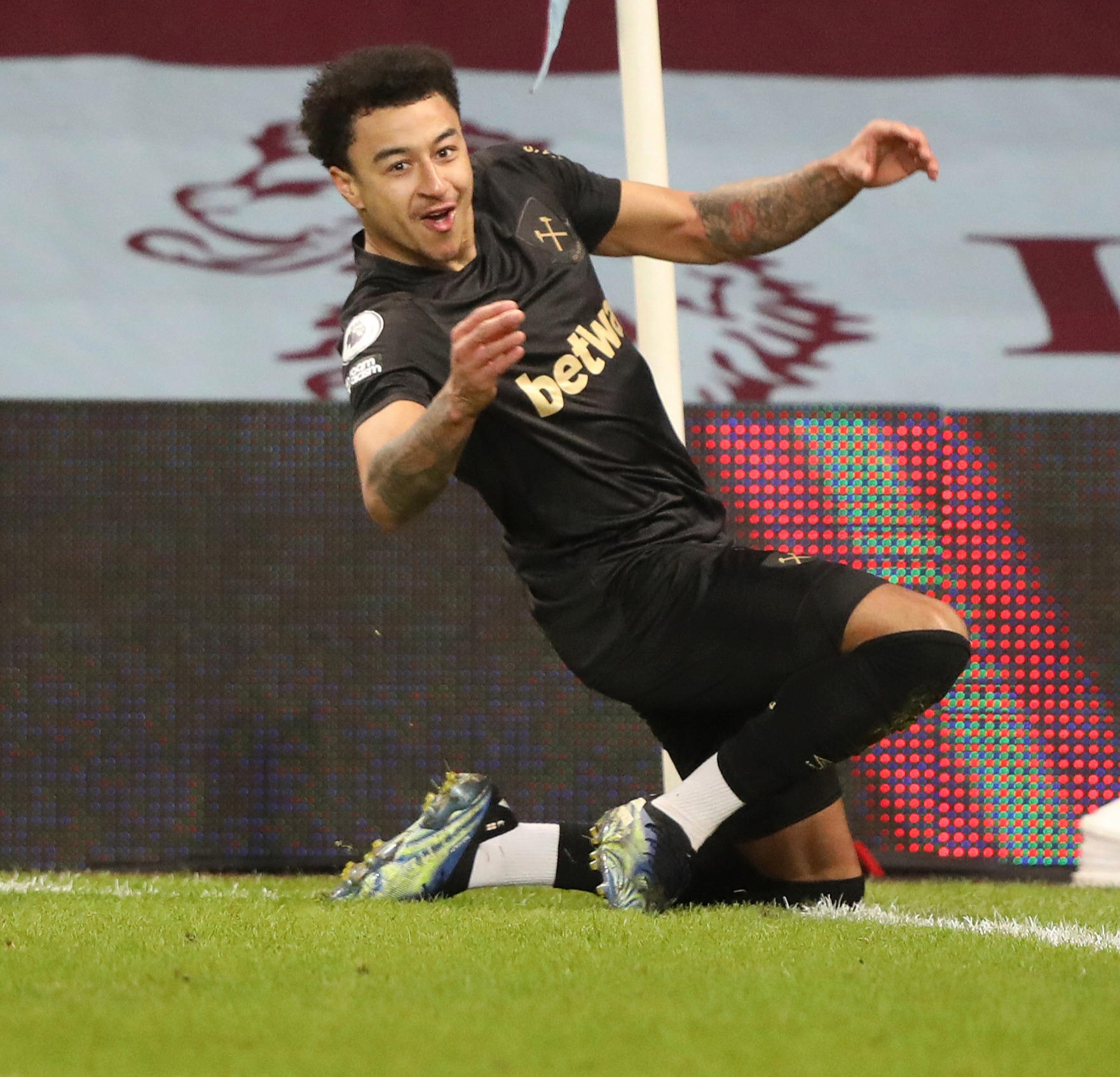 Jesse Lingard was the star man on his West Ham debut, scoring twice in a 3-1 win at Aston VillaCredit: Paul Marriott – The Sun 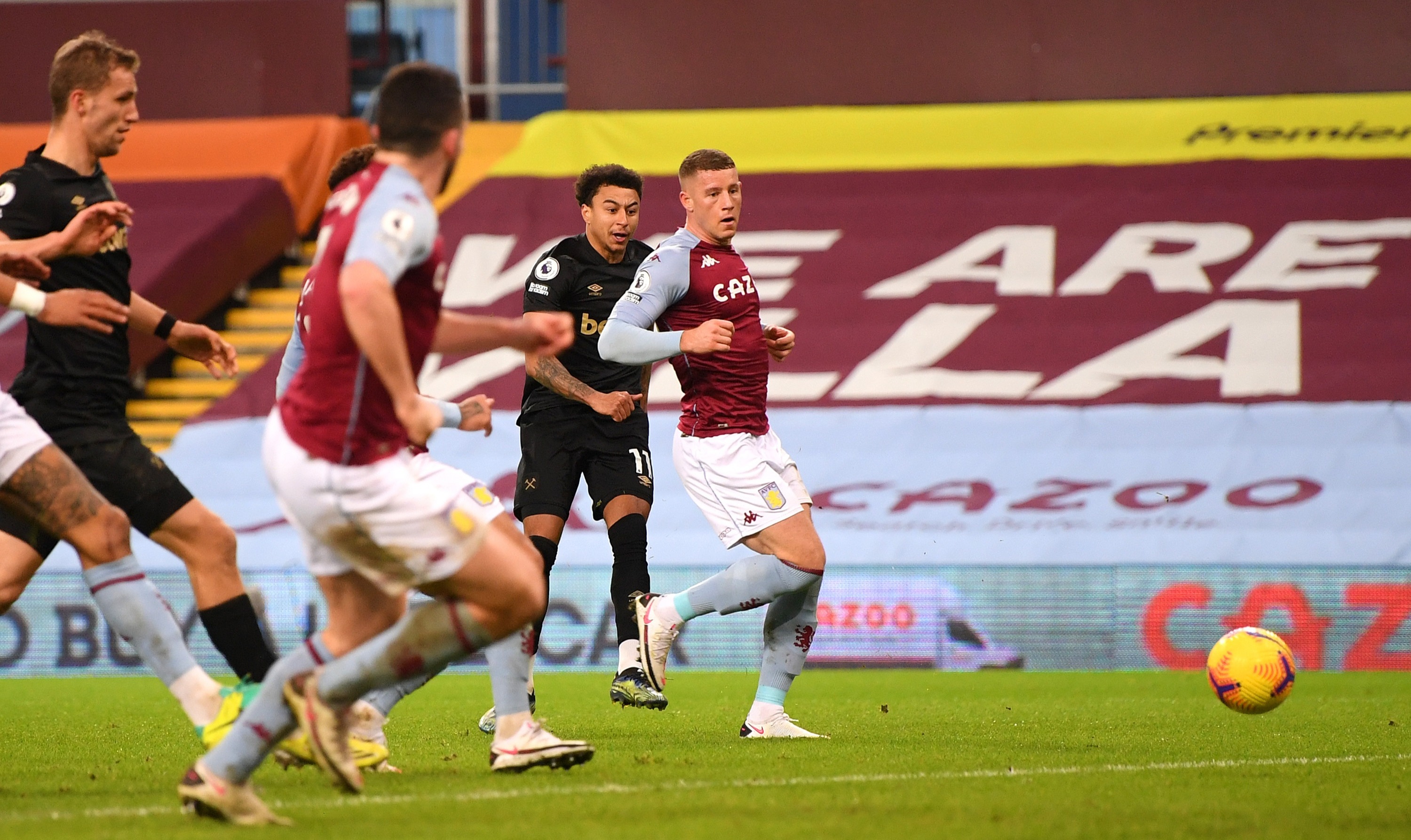 His man-of-the-match performance ended in injury time when he was replaced by Jarrod Bowen and he deserved the slug of water he celebrated with on the bench – job done.

The Hammers’ convincing win took them to fifth in the table with their best points haul at this stage of the season since the mid-80’s, when the mullet was in fashion and Tony Cottee and Frank McAvennie were ripping it up in short-shorts.

Lingard’s goals were his first since netting for United against LASK Linz in the Europa League in August and his first Premier League strikes since he scored in a 2-0 win at Leicester in July last year.

David Moyes must have seen enough from his loanee signing in training to decide he was up to speed and ready for his first league start of the season.

It didn’t take long for the rest of us to see why.

The United cast-off showed absolutely no signs of ring rust as he turned the clock back to the days when he was an automatic choice for England.

Villa Park may be Jack Grealish’s manor but it’s no exaggeration to say Lingard took over his patch as he stole the show from the local lad, in front of Southgate.

To be fair to Grealish he was pretty much bound and gagged by Moyes, who decided to employ a couple of burly minders to make sure he didn’t get up to too much mischief. 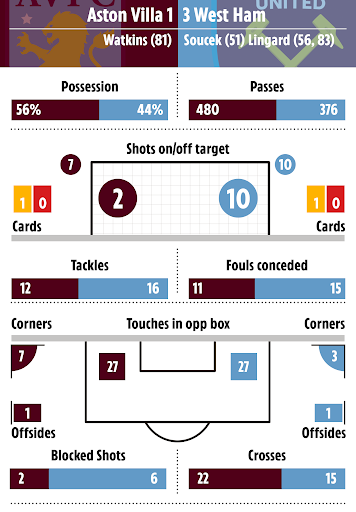 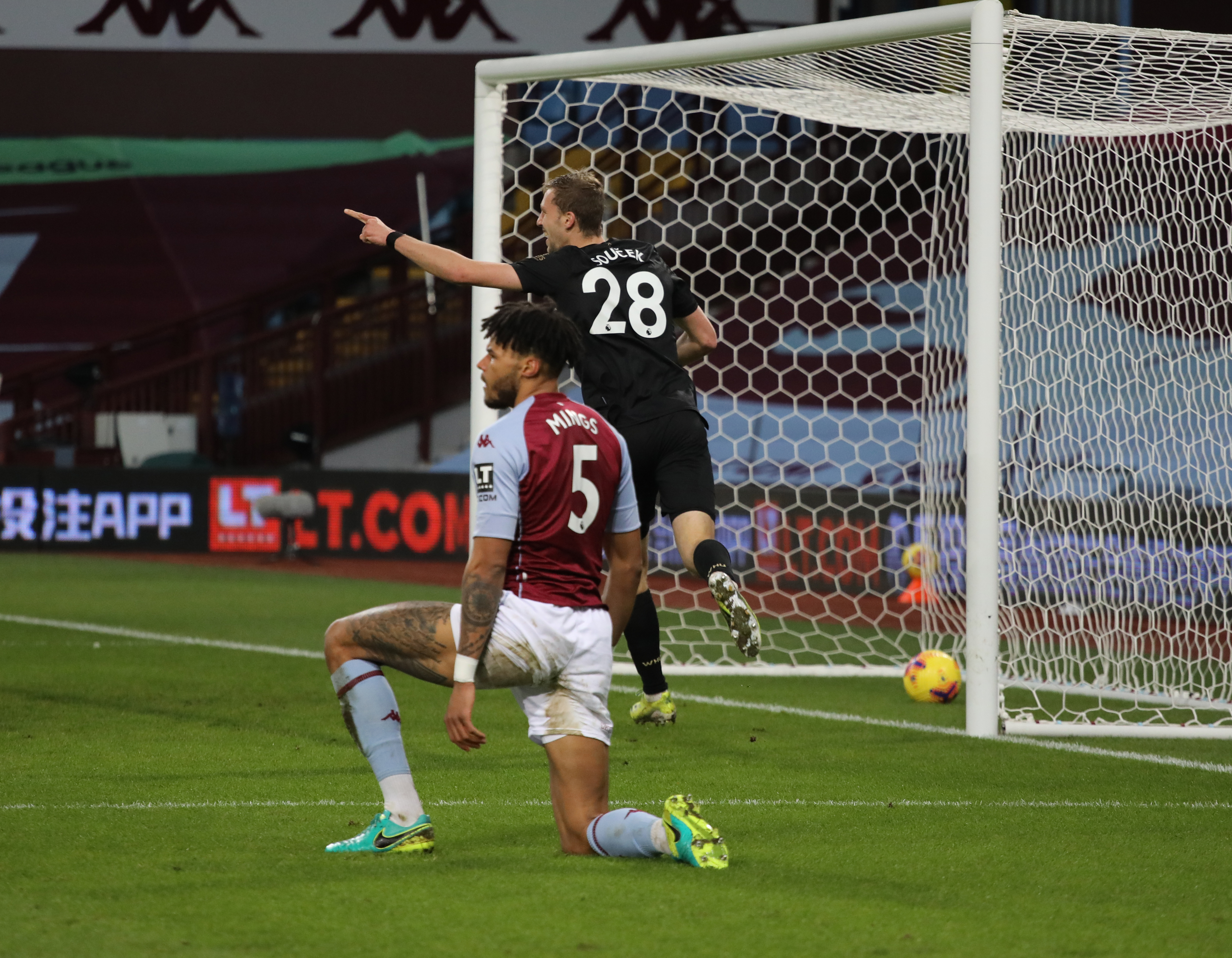 Tomas Soucek is proving to be one of the best arrivals of the last yearCredit: Paul Marriott – The Sun 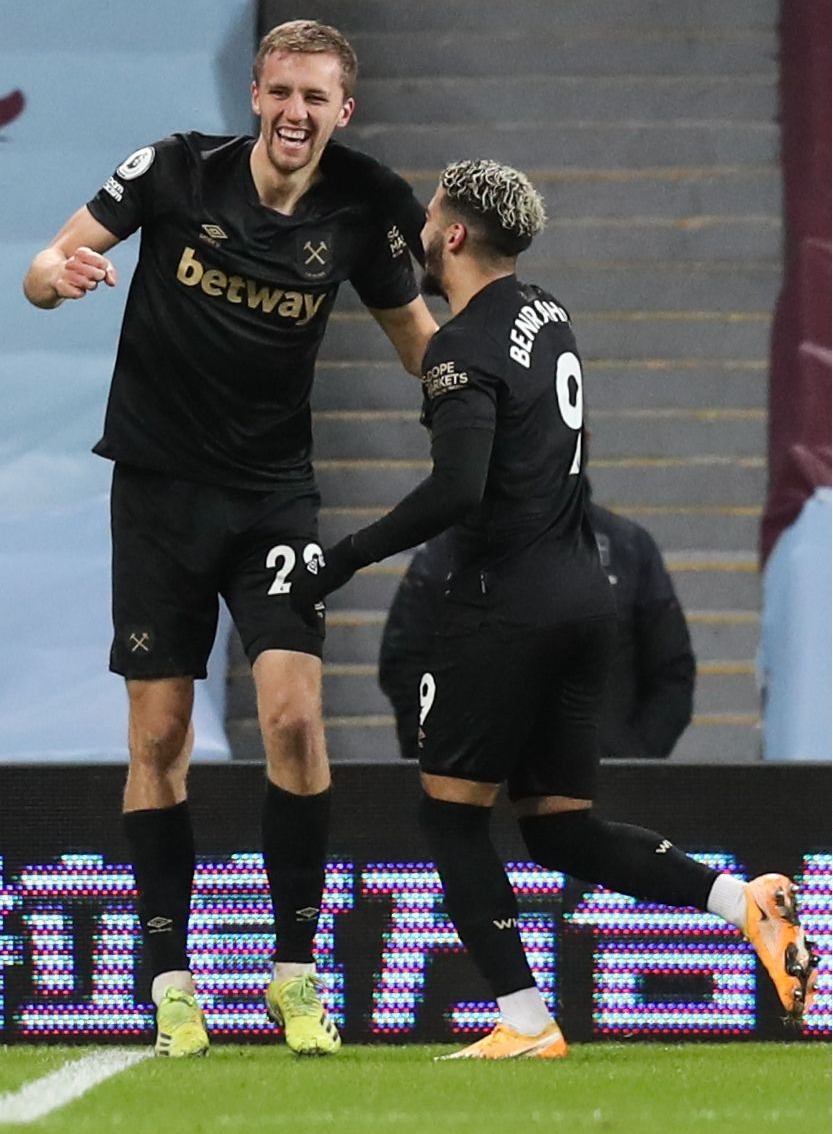 Soucek is the highest scoring midfielder from open-play this seasonCredit: Rex Features

Vladimir Coufal was his primary tormentor, getting up close and personal whenever the chance arose – and whenever Grealish was in possession full-back No2 Ryan Fredericks dropped in to provide some more hired help.

It was a cute tactical move by Moyes, who has praised Grealish as the front runner for this season’s Player of the Year awards and successfully snuffed him out.

Operating in the hole behind Michail Antonio, the 28-year-old pulled the strings for the visitors in his first outing since facing Watford in the FA Cup on January 9. 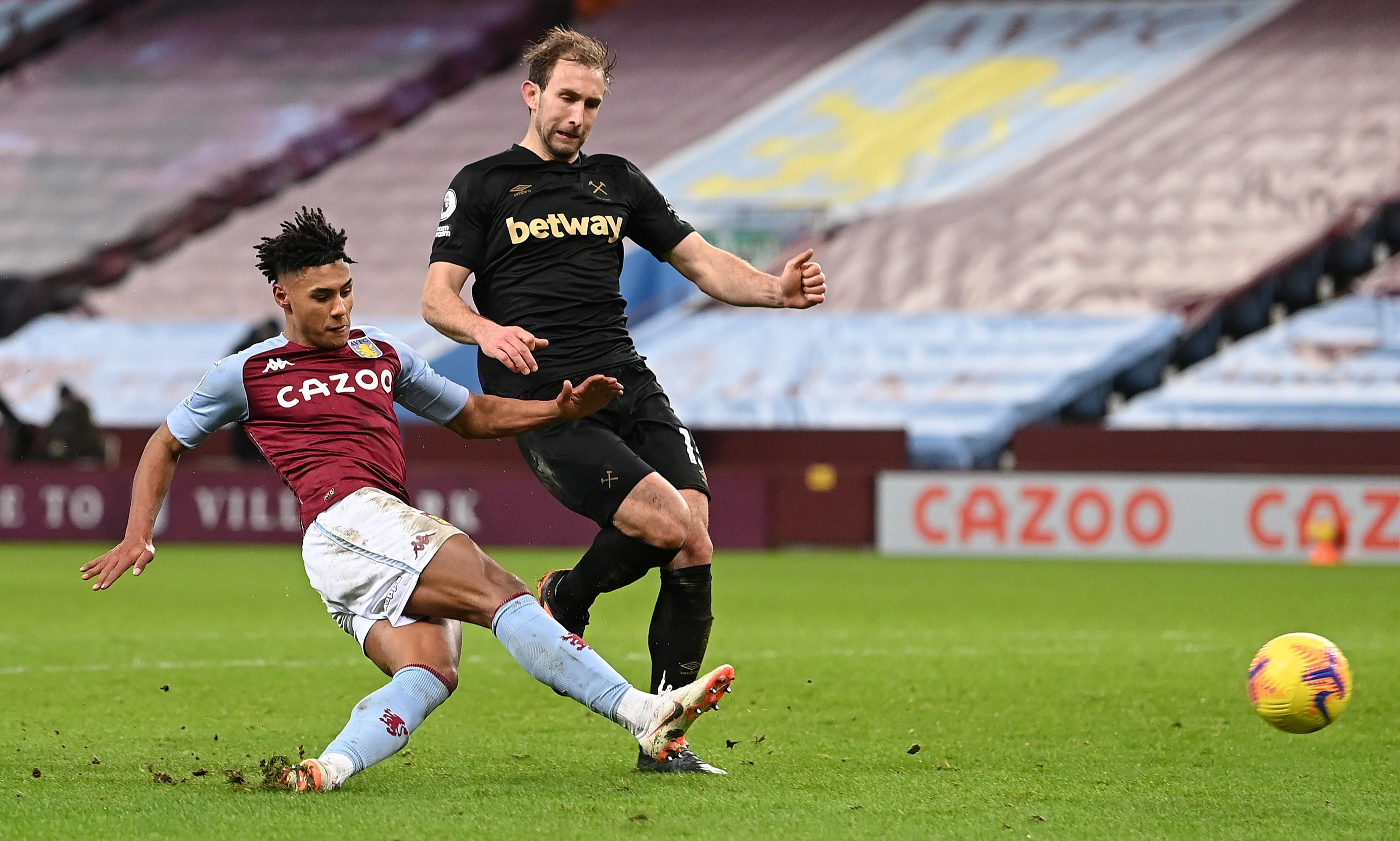 Early on he combined with Said Benrahma and when the former Brentford man’s shot was blocked by Ezri Konsa and Soucek worked it to Antonio.

The striker drilled his shot into the turf and wide. However West Ham might have had a penalty if Soucek had gone down as John McGinn appeared to clip him as he released his pass.

Lingard then fired in a ferocious shot which Emi Martinez beat out before Antonio just couldn’t get to the rebound.

Benrahma was next to test Villa’s impressive Argentine keeper, then Fredericks had a volley blocked as Villa had to weather West Ham’s bright start

It was no surprise to discover Lingard had more touches than any other West Ham player in the opening 20 minutes but gradually Villa got their act together.

Then a poor touch by Craig Dawson was pounced on by Grealish who picked out Watkins for the Villa striker to cut inside on to his right foot and curl a sweet shot which left Fabianski stranded.

However to West Ham’s relief the ball clipped the outside of their far post and bounced to safety.

Ross Barkley then squandered a golden opportunity when Matt Targett’s free kick was headed down by Dawson, with the Chelsea loanee shooting wide. 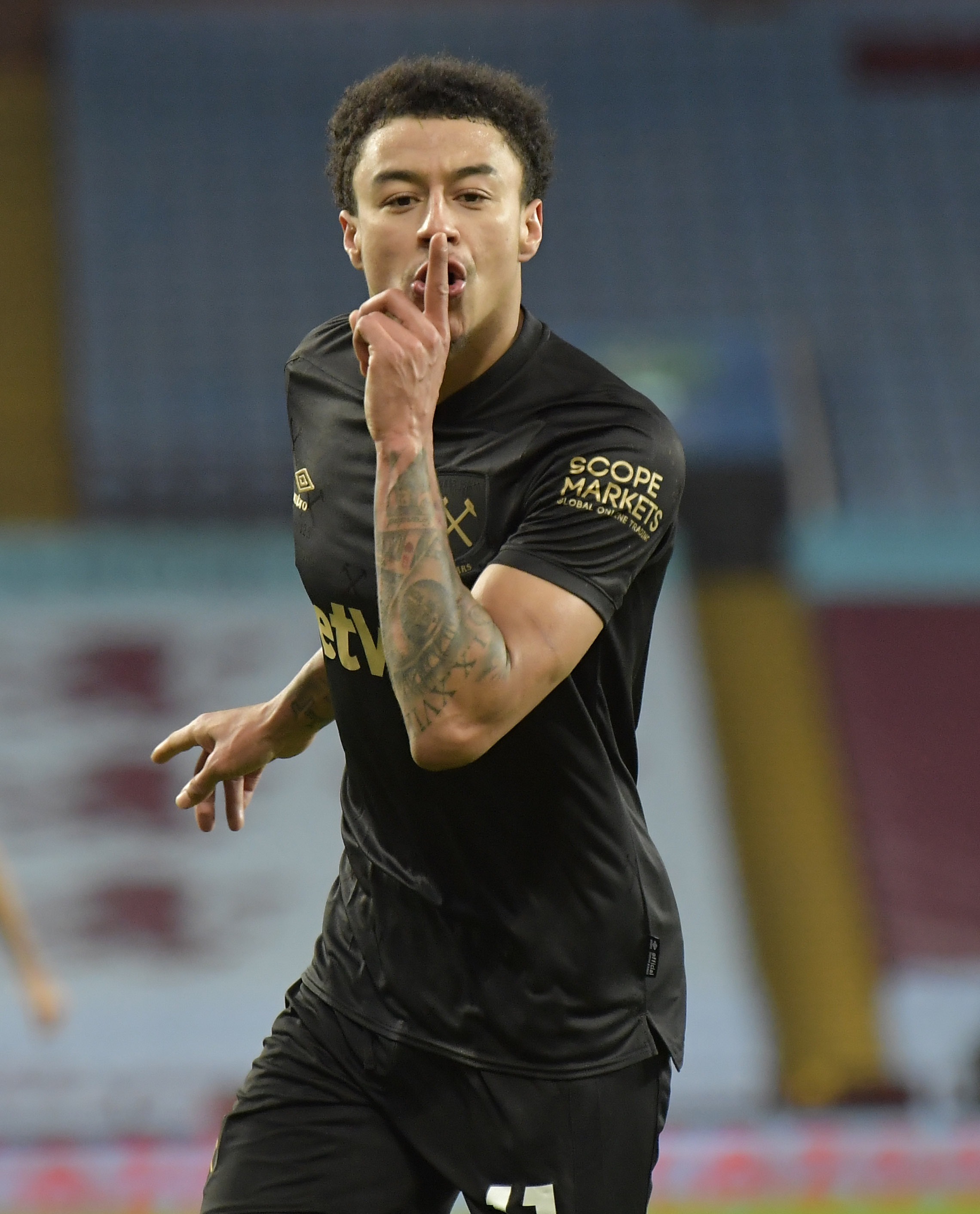 There was no doubt who the star of the show was at Villa ParkCredit: Rex Features

Dean Smith sent on Bertrand Traore for the ineffective Anwar El Ghazi at half-time but it was West Ham who stepped up a gear or two to grab their third consecutive away league win.

Soucek set them on their way with his eighth goal of the season six minutes after the restart.

Antonio chested the ball down and played in Benrahma whose first time pass sent Soucek bursting clear on a third-man run and Soucek gave Martinez no chance with a drilled low shot which flew by Martinez into the far corner.

The Czech is second only to Bruno Fernandez in terms of goals from midfielders this year and he is becoming just as influential for Moyes’ Hammers.

However this was Lingard’s night and it was fitting he should mark his return with a brilliant goal five minutes later.

Antonio and Benrahma combined and the striker produced a gifted pass which Lingard took down expertly before blasting it into the far corner off Martinez’s gloves. 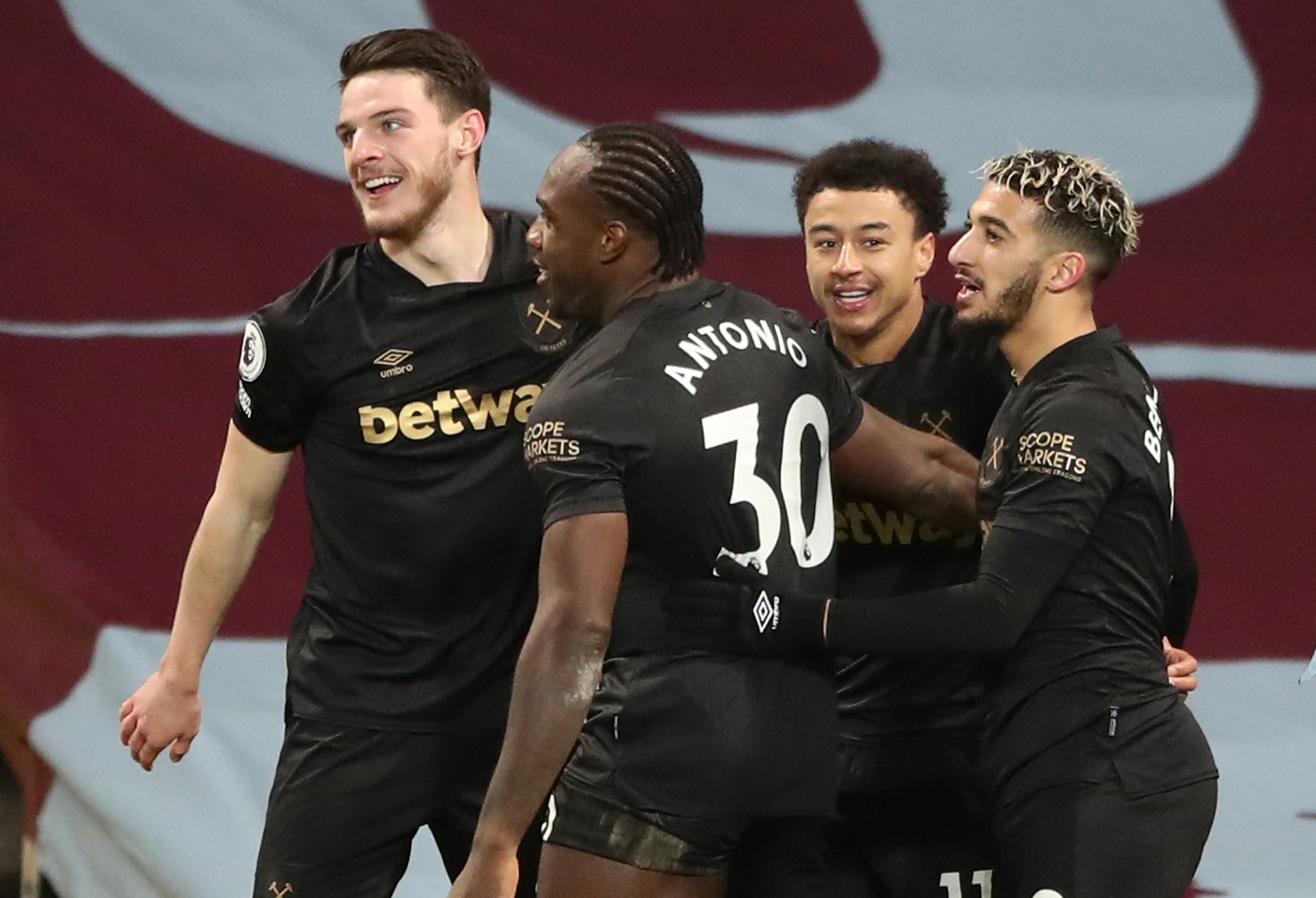 West Ham have put themselves in with a great chance of European qualificationCredit: Reuters

Villa were stunned but hit back with nine minutes remaining when Grealish showed his class with a brilliant set up for Watkins who slammed an angled shot expertly beyond Fabianski.

But any hopes of a Villa comeback disappeared as Lingard made sure the headlines were all about him as he grabbed his second and West Ham’s third.

Antonio set him free and the midfielder strode forward before drilling in a low shot which Martinez allowed to squirm underneath his body and in.

It wasn’t the most clinical goal Lingard will ever score – but it was thoroughly deserved.

Speaking after the game the new Hammers hero said: “Three points is the most important thing, the team worked hard as a collective. We are focussing on the next game, Fulham.

“I settled in fairly quickly and familiar faces has helped. The manager has worked hard on the training pitch.”