SOMEONE from Spurs had better try to remember where they parked their open-top bus.

Then when they find it, they need to check beneath all the rust and dust to ensure it is still roadworthy. 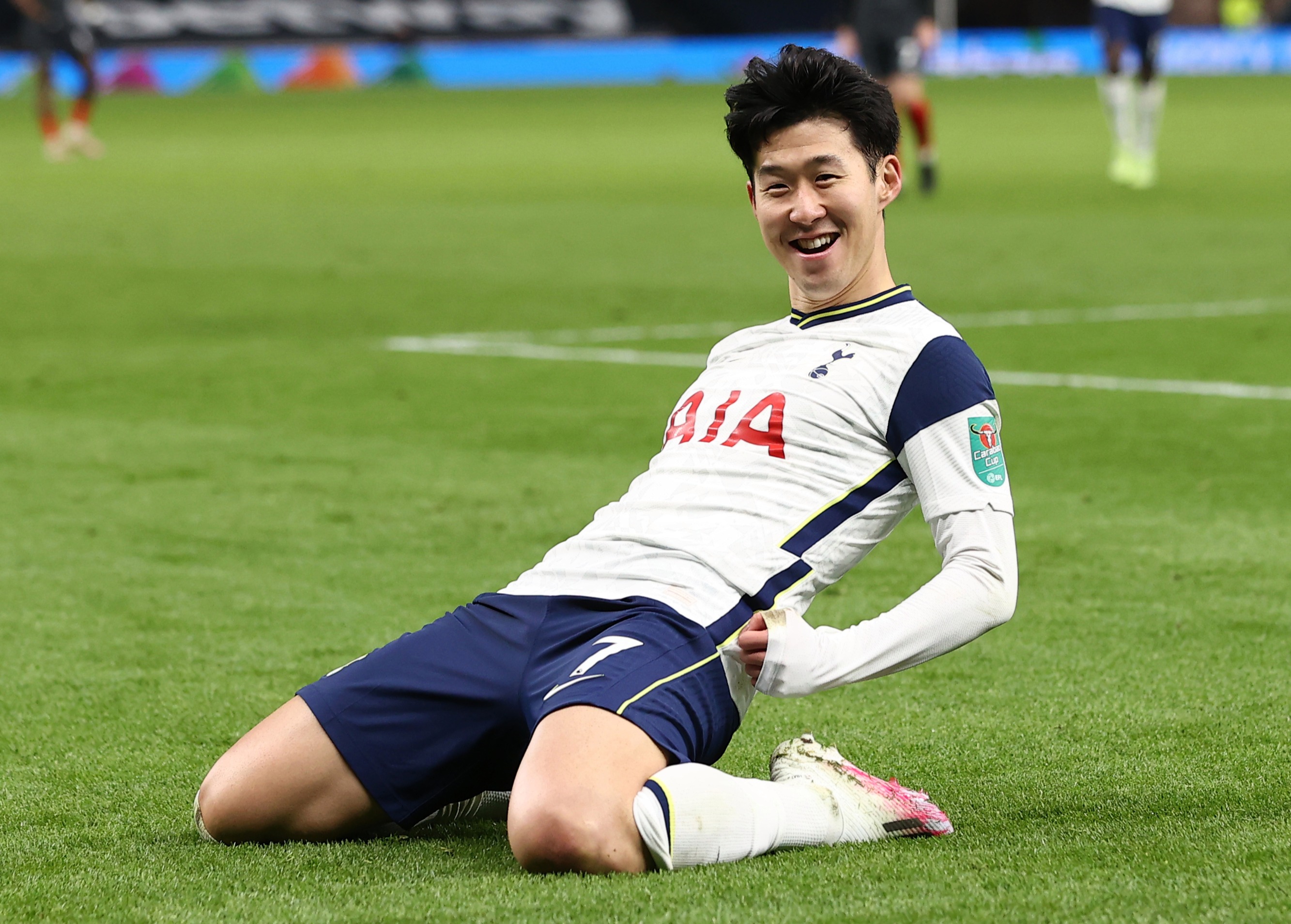 Son Heung-min was on target as Tottenham booked their place in the Carabao Cup finalCredit: News Group Newspapers Ltd 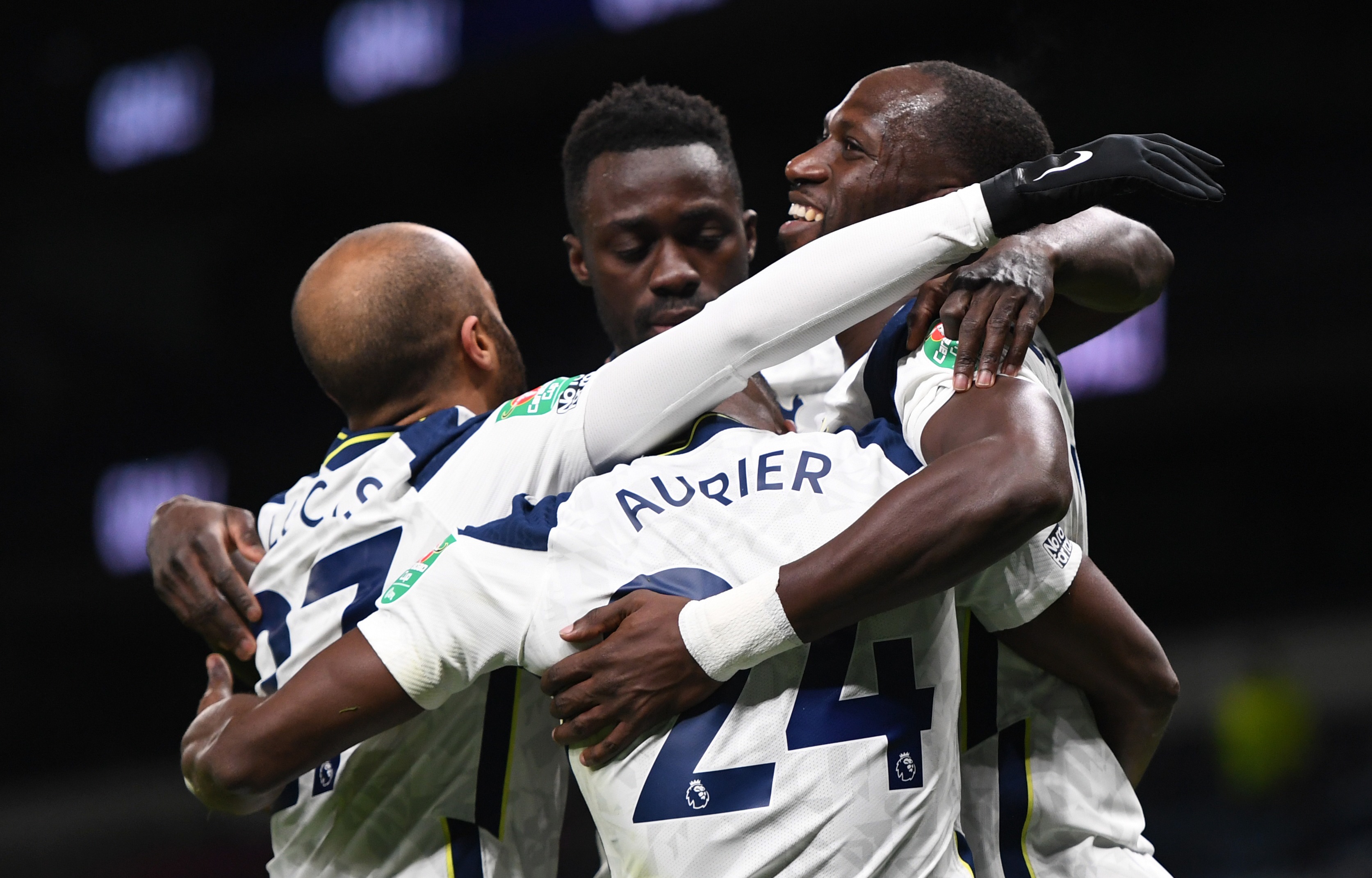 And if it is, then all they need to do is hire some horses to pull it!

But Tottenham can get ready to break open the Brasso after moving a step closer to ending their 13-year wait for a trophy.

Goals from Moussa Sissoko and Son Heung-min sealed a hard-fought victory over Brentford in this one-legged Carabao Cup showdown.

Thomas Frank’s Championship Brentford – playing in their first ever major cup semi-final – pushed their Prem stars all the way, and will be rueing the VAR’s decision to chalk off Ivan Toney’s second half strike for offside, with the score at 1-0.

The visitors’ misery was compounded when ref Mike Dean red carded Josh Dasilva after VAR ordered him to the pitchside monitor to view the midfielder’s X-rated horror lunge on Pierre-Emile Hojbjerg.

But Tottenham will not care about that after setting up a Wembley date against one of the Manchester giants on Sunday, April 25.

Spurs have not lifted silverware since winning this trophy in 2008 – when it was the Carling Cup.

It may not be the most glamorous competition but when you have only won three trophies in 37 years it might as well be the Oscars.

Ivan Toney scored to make it 1-1 but the goal was ruled out for offsideCredit: Sky Sports 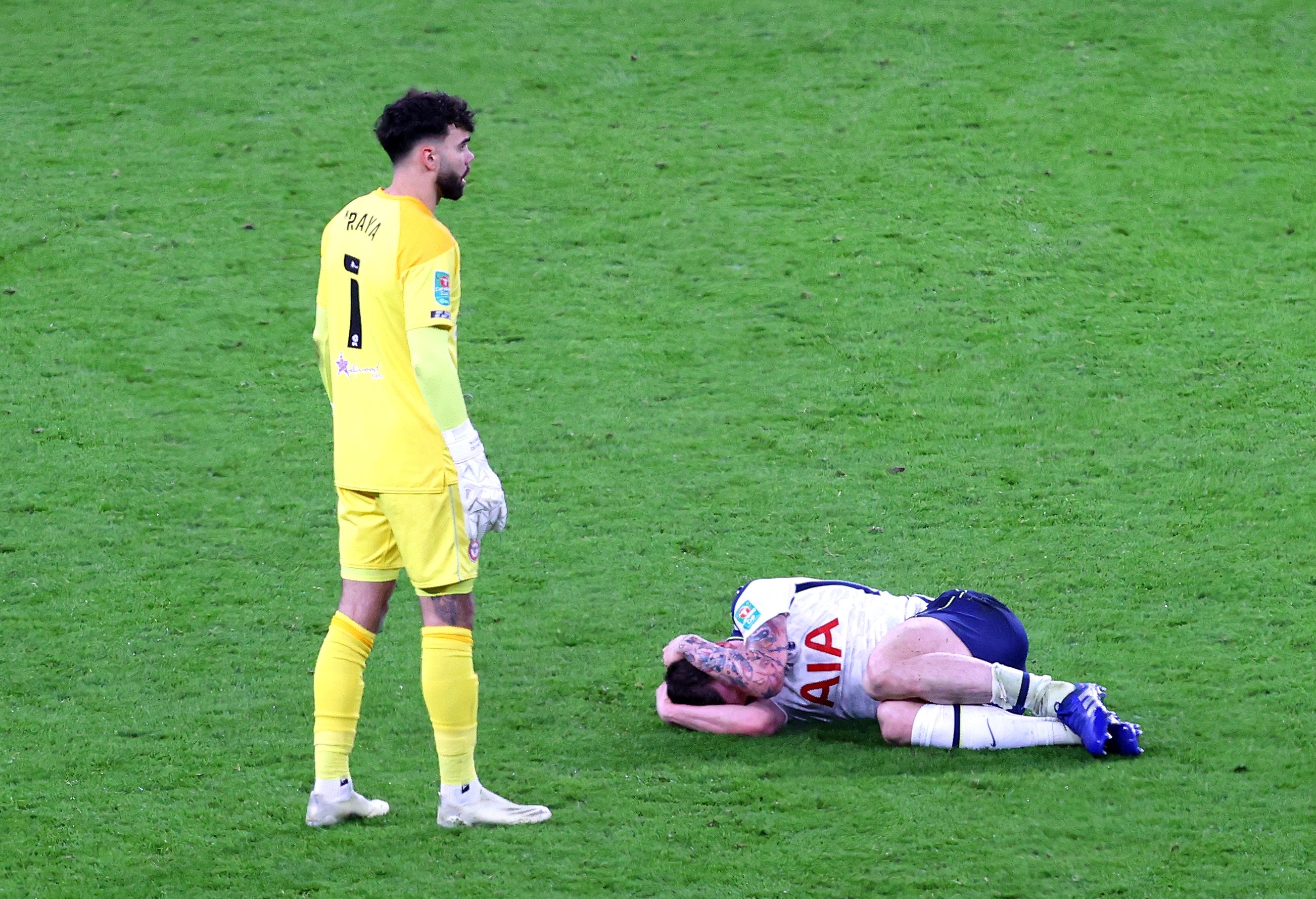 Josh Dasilva was sent off late on for a bad tackle on Pierre-Emile HojbjergCredit: Getty Images – Getty

Mourinho will be looking to win English football’s second domestic cup competition for a FIFTH time – and if it is good enough for this serial winner it should be good enough for anyone.

He was brought into Tottenham 13 months ago to bring silverware back to N17.

And Spurs chairman Daniel Levy and their players and fans will be hoping the Special One’s habit of winning honours in his second season with clubs will kick-start a new golden era at this one.

So he will probably not be feeling too Supersonic this morning after the Bees failed to cause an upset. 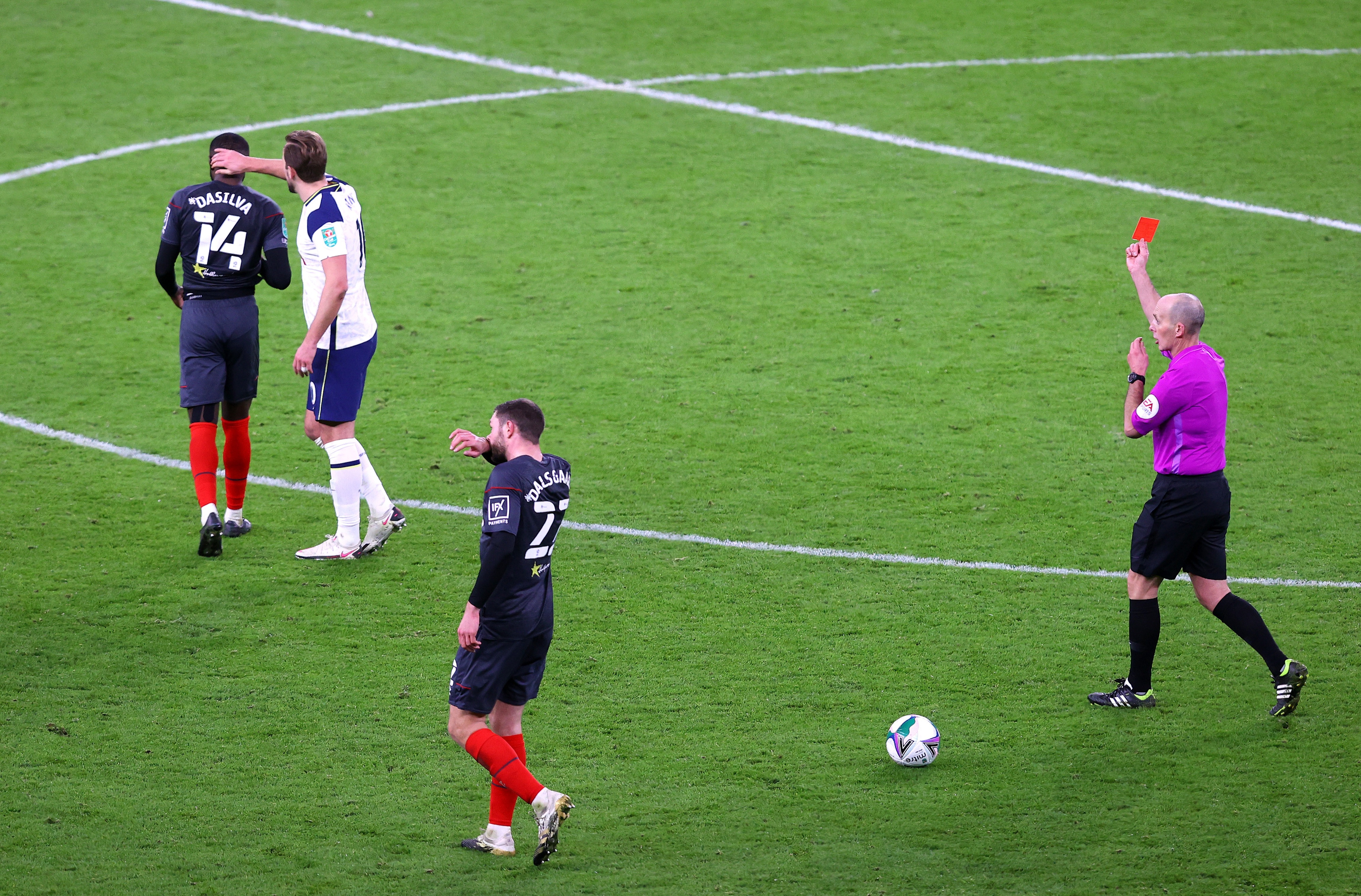 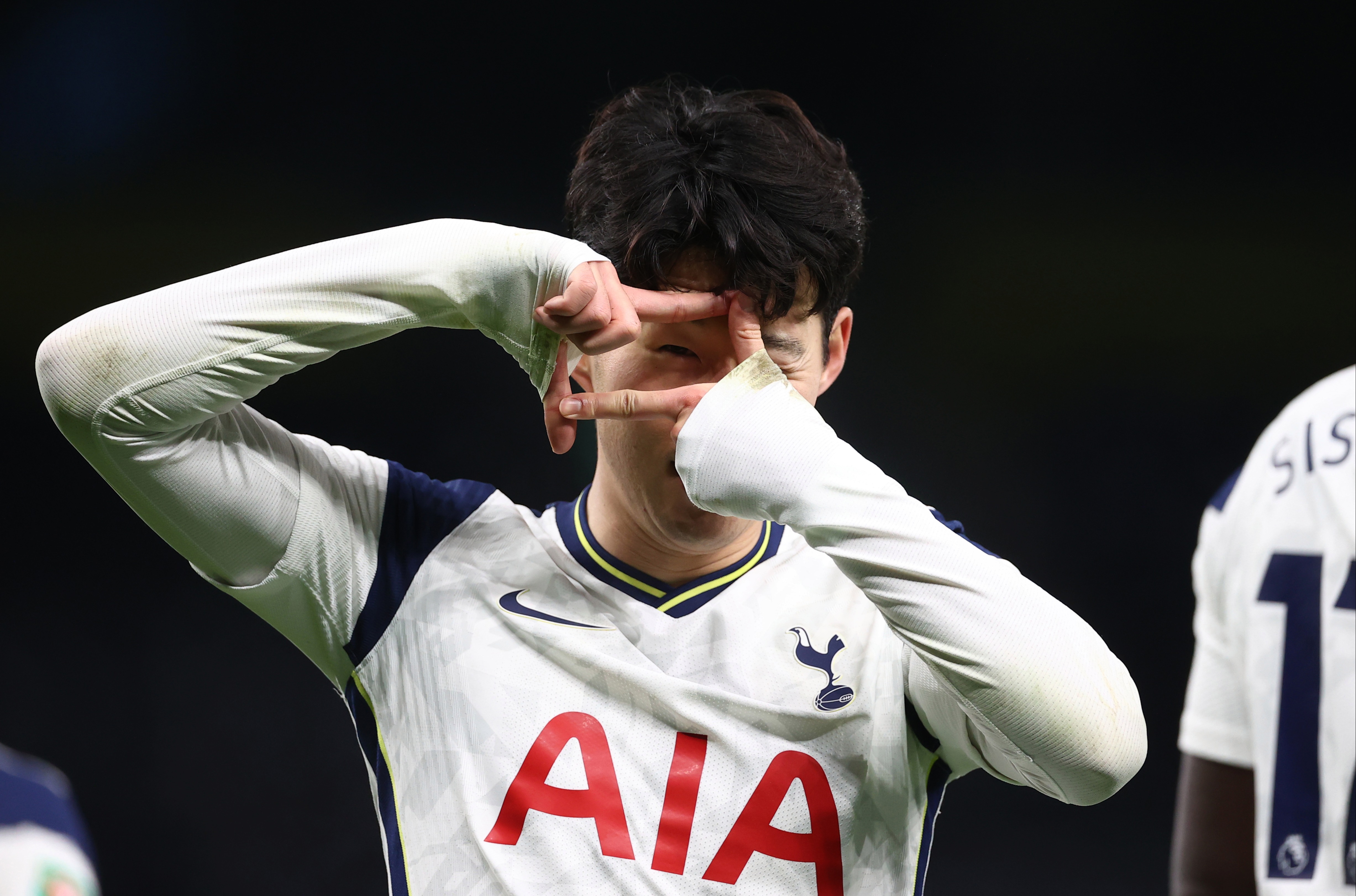 Son and Co are just one match away from winning a trophyCredit: News Group Newspapers Ltd

It was the French midfielder’s first goal for 13 months and the hosts almost added a second two minutes later when Son’s sidefooted shot from the edge of the area was beaten away by Brentford keeper Simon Raya.

Mourinho, who was accused of being too pragmatic after his side threw away half-time leads in their Prem draws at Crystal Palace and Wolves last month, had vowed they would go for the jugular if they managed to get their noses in front here.

But despite dominating the ball in the first half they frequently found their path to goal blocked by Frank’s banks of midfielders and defenders.

And while the score remained 1-0 the Bees were always in within a chance. 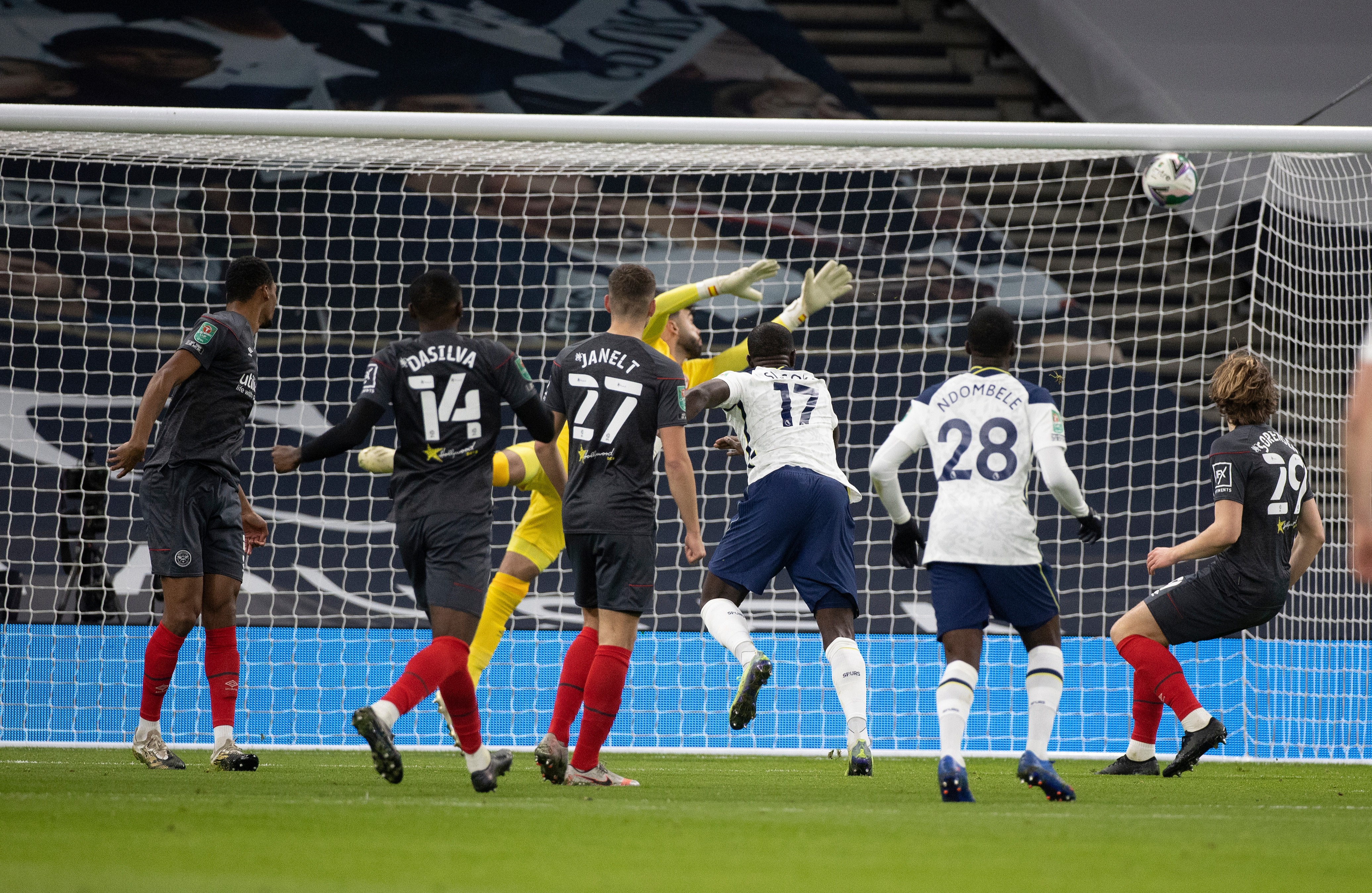 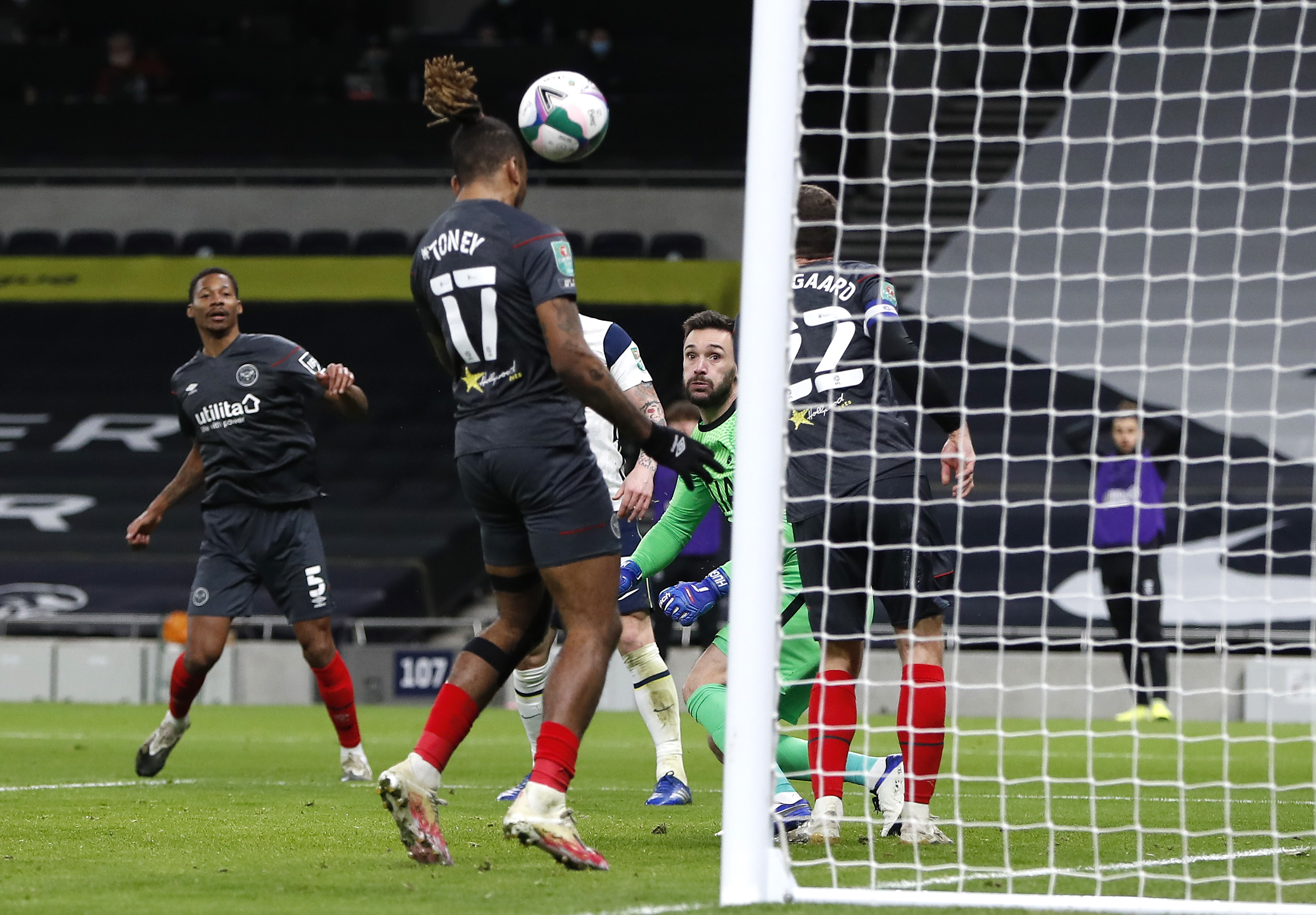 Toney headed in during the second half before VAR came into playCredit: Reuters

Unfortunately for them, their 16-goal striker Toney could not outmuscle defender Davinson Sanchez to get another purchase on his header when right-back Henrik Dalsgaard’s cross set up their first real chance in the 35th minute, and Hugo Lloris saved comfortably.

Toney nearly scored a second for Spurs when inadvertently deflected Lucas Moura’s header from Son’s corner over Raya’s head and towards the net. But the Spanish stopper recovered brilliantly to claw the ball away from under his own bar and keep the visitors into the game going into the break.

Having spent most of their 131-year history in the lower Leagues, the only real finals Brentford have reached are the Freight Rover Trophy in 1985 and the Leyland Vans Trophy in 2001.

Their last cup semi-final was a second leg away to Exeter in the Johnstone’s Paint Trophy 10 years ago when the Bees won 2-1 to seal a 3-2 aggregate win.

They went close to getting back on level terms early in the second half when Bryan Mbuemo managed to get in behind the Spurs defence and pull the back to Toney, who shot was superbly blocked by Serge Aurier on the edge of the six-yard box. 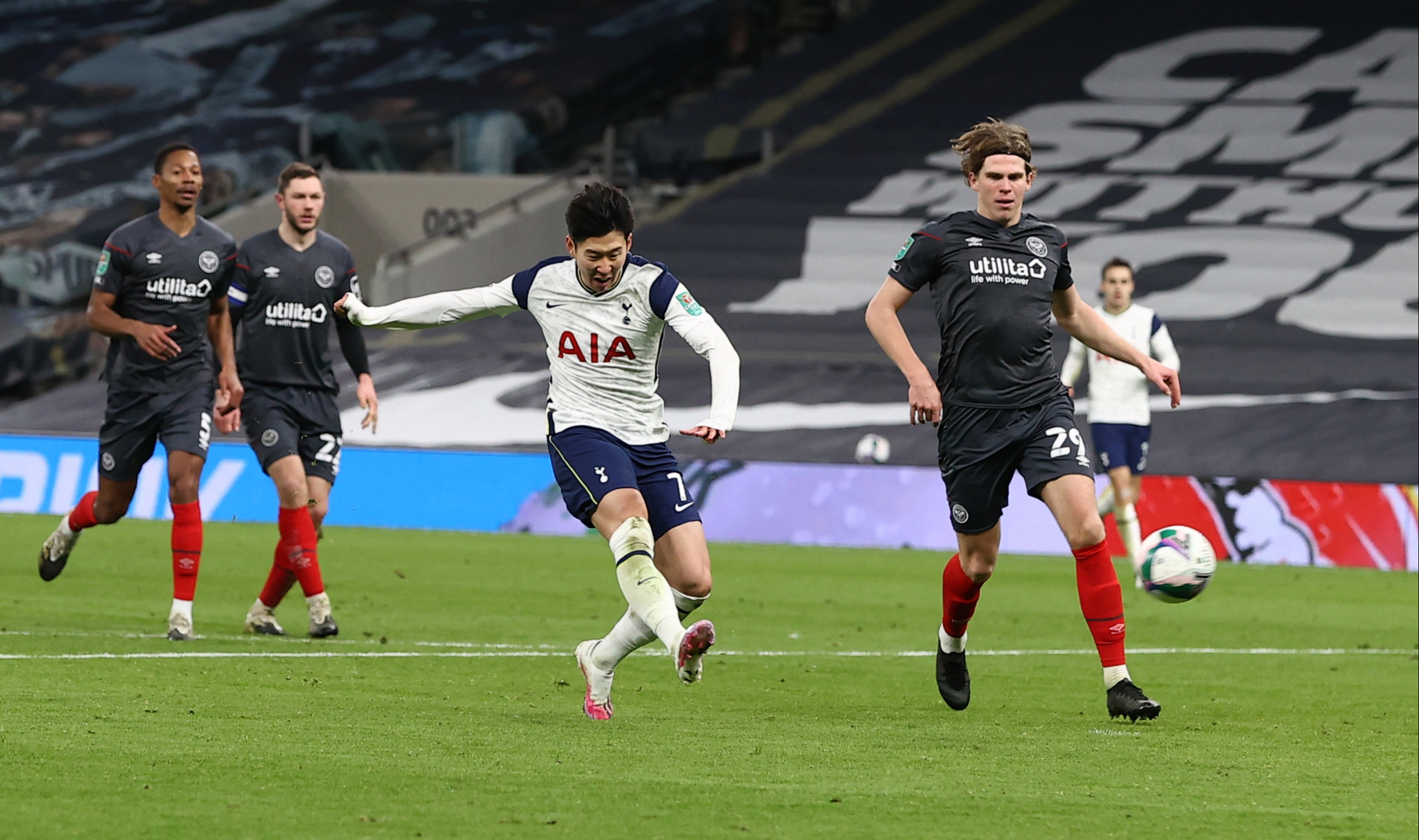 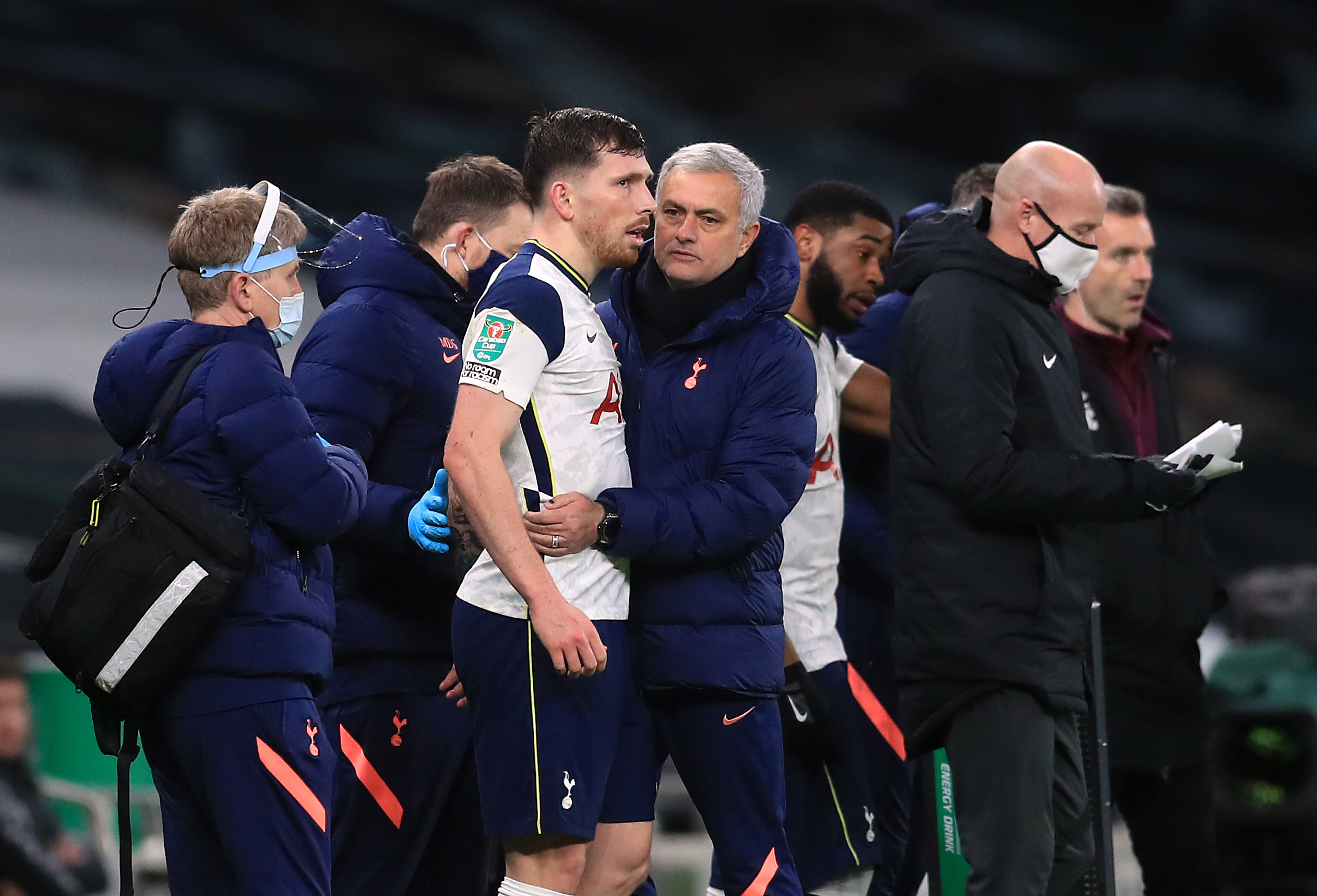 The Ivorian full-back then wasted a chance to make it 2-0 himself moments later when he blazed a shot over the bar – with Harry Kane waiting for a cross in the middle.

Spurs showed a rare glimpse of Premier League class when Sissoko’s drilled cross was volleyed back across goal and just wide by Son.

Then Toney had what he thought was an equaliser ruled out by the VAR – who spotted the frontman’s knee was offside when tapped home from close range Lloris and his defenders had made a hash of defending a corner.

The Bees, of course, are not used to dealing with such technology in the Championship, and after experiencing it here, they might not be so keen to gain promotion to the top flight.

Especially as Son rubbed salt in the wounds by racing away to slot Tottenham’s second from a fine Tanguy Ndombele pass.

Ndombele then hit a post before Dasilva’s sending off.