ENGLAND star Kieran Trippier is reportedly yet to link up with the squad due to personal reasons ahead of Friday’s clash against Italy.

However it has been claimed that the 32-year-old hasn’t pulled out of the squad, and remains in contention to face the Azzurri in the crucial Nations League meeting.

Newcastle right-back Kieran Trippier is yet to link up with the England squadCredit: Getty

According to BBC reporter Alex Howell, the Newcastle defender isn’t currently at St George’s Park with the rest of his Three Lions team-mates.

Boss Gareth Southgate has given him time off for personal reasons.

Though it has been said that the former Tottenham star is expected to be at England’s headquarters in Burton upon Trent later on Tuesday.

He remains able for selection in the upcoming clashes against Italy in Milan on Friday, and Germany at Wembley next week. 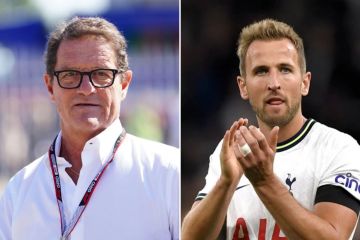 Trippier has been ever-present for the Magpies this season having featured in all seven Premier League matches.

And he showed he is still capable of producing moments of magic as shown by his glorious free-kick in the thrilling 3-3 draw with Manchester City.

As well as Trippier, his Newcastle team-mate Nick Pope has also been called up by Southgate following his strong start to the campaign.

It is the first time that Newcastle have had two players in an England squad since Scott Parker and Alan Smith were selected in 2007.

One player that was at St George’s Park on Tuesday was Liverpool skipper Jordan Henderson.

Despite missing the last three games with a hamstring injury, the former Sunderland ace was handed a late call-up after Kalvin Phillips was forced to pull out.

England confirmed the announcement in a statement earlier today, with Henderson now in contention to feature at the San Siro.

The decision was made to call-up Henderson after he came through a number of workout sessions over the weekend.