FC SION say that Mario Balotelli has bronchitis after reports he had gone AWOL after a video surfaced of him staggering out of a bar with a mystery woman.

The Italian striker completed a move to the Swiss side on deadline day – joining the ELEVENTH club of his career.

FC Sion claim Mario Balotelli has been absent from training due to illnessCredit: AFP

The deal was completed just days after the 32-year-old left Adana Demirspor following a bust-up with manager Vincenzo Montella.

The fallout was so bad, Balotelli demanded his release and quickly left to join FC Sion for £2.3million.

He has only featured twice for them, and is yet to score, but he has reportedly already found himself mired in controversy again.

A video surfaced of Balotelli over the weekend appearing to stumble out of a bar in Lausanne with his arms draped around a lady in red and another male. 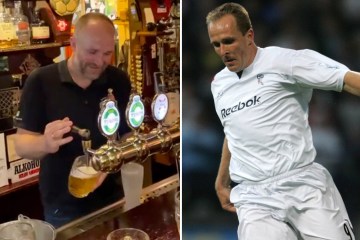 That clip quickly went viral and he soon found himself in the headlines again.

According to reports, Balotelli has not appeared at Sion since or made any contact with his new employers.

However, their president Christian Constantin claims that the forward was ill in training on Monday and has been absent due to having bronchitis, says Nau.ch.

Balotelli has not remained silent on social media as he posted a clip of his apartment on his Instagram story yesterday.

Sion face Rapperswil in the second round of the Swiss Cup on Saturday and it remains to be seen whether the forward will be in action.

The volatile ace shot to fame in England after joining Manchester City from Inter Milan in 2010.

Although that did not spell the end of Balotelli’s time in England following a shock switch to Liverpool in 2014.

His time spent at Anfield proved uneventful as the attacker managed just four goals in his 28 matches.

Balotelli later enjoyed spells in France with Nice and Marseille, before returning to Italy with Brescia as well as Monza.

He then joined Adana Demirspor in Turkey in July 2021, scoring 19 goals in 35 games, before his departure last month.