STEVE GERRARD knows better than anyone at Anfield that there is many a slip between cup and lip.

Mo Salah slammed home the penalty that reminded him of that old phrase and how true it can be.

Gerrard’s unbeaten start to life at Villa came to an end at LiverpoolCredit: AFP 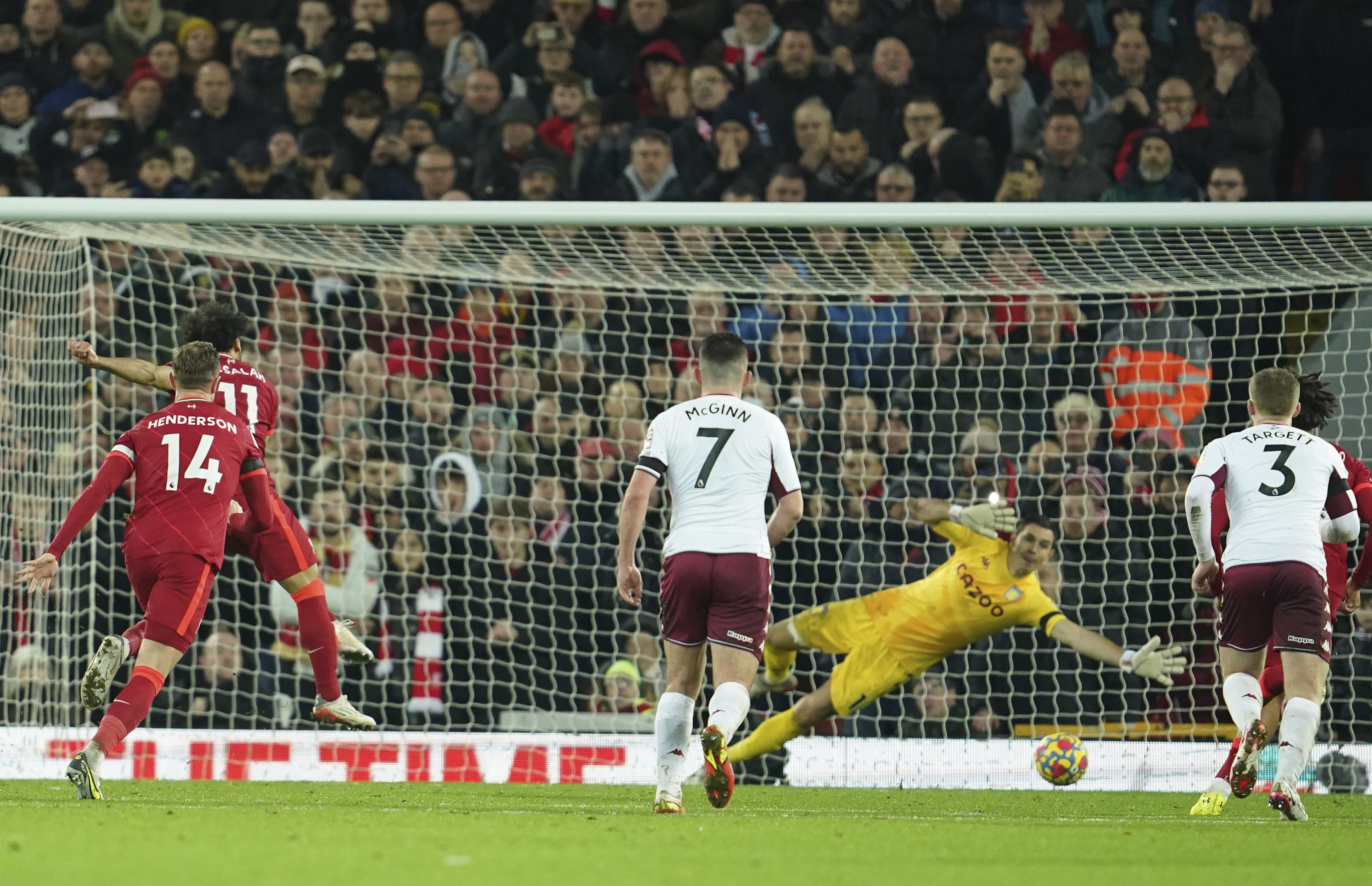 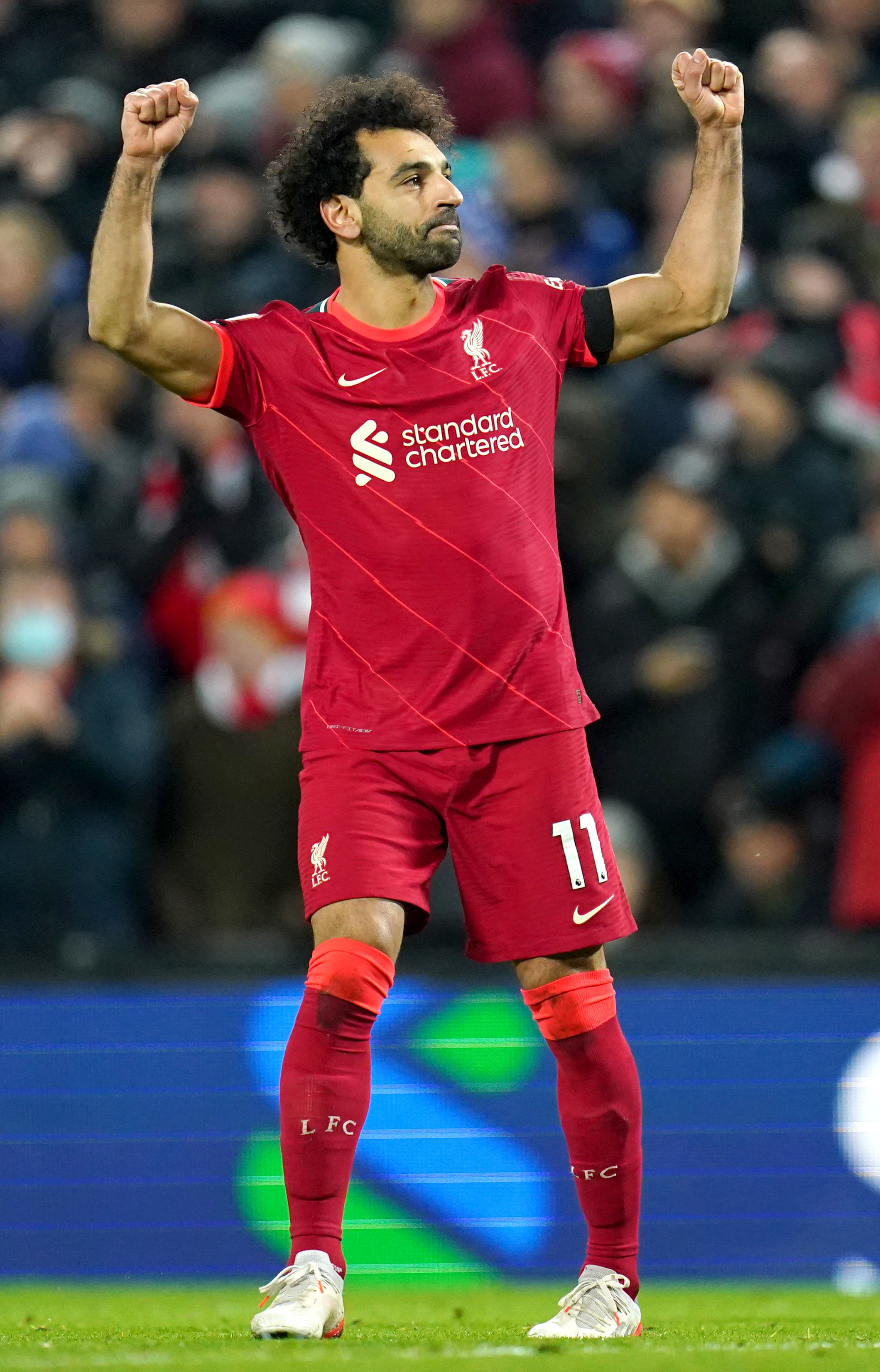 The forward scored his 14th league goal of the seasonCredit: AFP

Gerrard, of course, fell at the fatal moment back on that miserable April night seven years ago, with Demba Ba streaking clear to give Chelsea the first goal of a 2-0 defeat.

Liverpool’s title challenge was effectively over from that moment when triumph under Brendan Rodgers side that he captained had seemed assured.

So it was that almost 66 minutes into this tense affair Gerrard will have been beginning to believe that his first return as a manager might end with a point.

But Tyrone Mings couldn’t help help pressing the panic button as Salah tried to dance around him in the box.

The central defender first grabbed him then flicked his right boot into the Egyptian’s right ankle.

A short, but pointless VAR check later Salah was claiming his 21st goal of the season following his faultless strike and all hope was gone for Gerrard and his team.

With three minutes left there was more disappointment for him because another more meaningful Stockley Park re-run absolved Alisson after he seemed to catch ex – Liverpool front man Danny Ings.

He kicked an attempted clearance against Joel Matip before scrambling to try and grab the loose ball.

Gerrard will have expected no less than the joy and relief expressed by Jurgen Klopp, Liverpool and the Kop at the end.

But he might have expected a little more when he followed his players out onto the touchline of his spiritual home.

There were boos for those in white shirts but as the legendary former skipper appeared they changed to roar of welcome, then ten seconds of warm applause from around the stadium.

And that was about it, really. Hardly a mass Klopp-style hug, although he did get a brief one from the German.

Gerrard was making his first return as a manager 23 years and 12 days since Gerard Houllier gave him his debut in a 2 – 0 win over Blackburn.

There was double triumph in the FA Cup, a League Cup treble, the UEFA Cup and of course incredible 2005 comeback glory for him to lift the Champions League trophy. 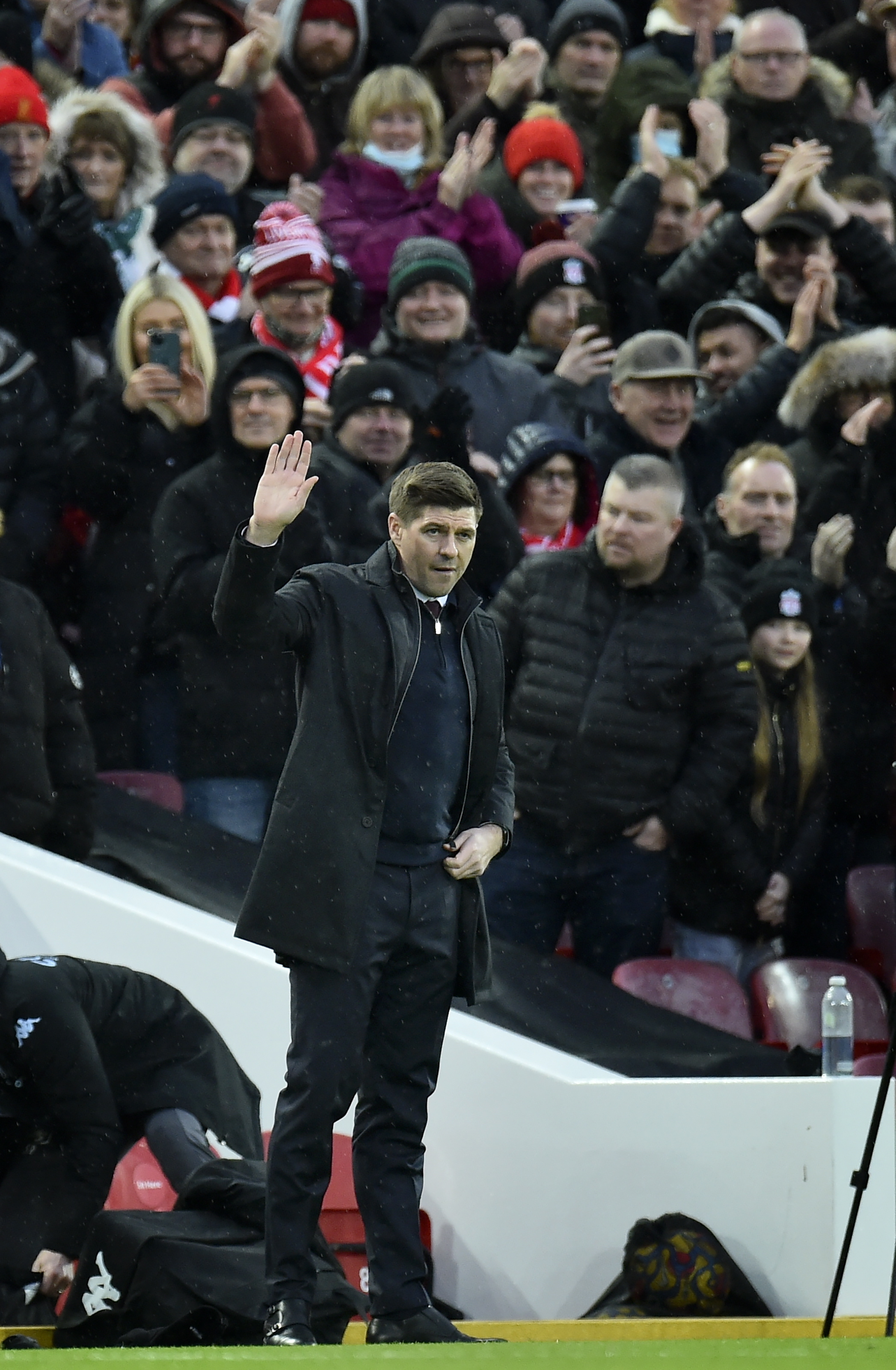 The former England captain was clapped by both sets of fansCredit: EPA

The moment when he screams his head off as he lifts that trophy above him is depicted on a mural on the wall outside the ground.

Throughout so many of those seasons Stevie G was the hero, an inspiration to so many.

In the build – up to the game Jordan Henderson, given the precious armband after Gerrard left for LA Galaxy in 2015, said how he set standards that he now still lives and plays by.

But this was Anfield. This was Liverpool 2021.

Time has moved on and a first Prem title and a sixth Champions League success followed the departure of the pair.

The way his former club even play the game has also long since changed.

Once upon a time the Kop loved almost every touch that Gerrard made.

But they love what has happened under Klopp even more.

So welcome, Stevie. But this is our team now. Our lads have won seven in a row and we want it to be eight.

And we want the title back. 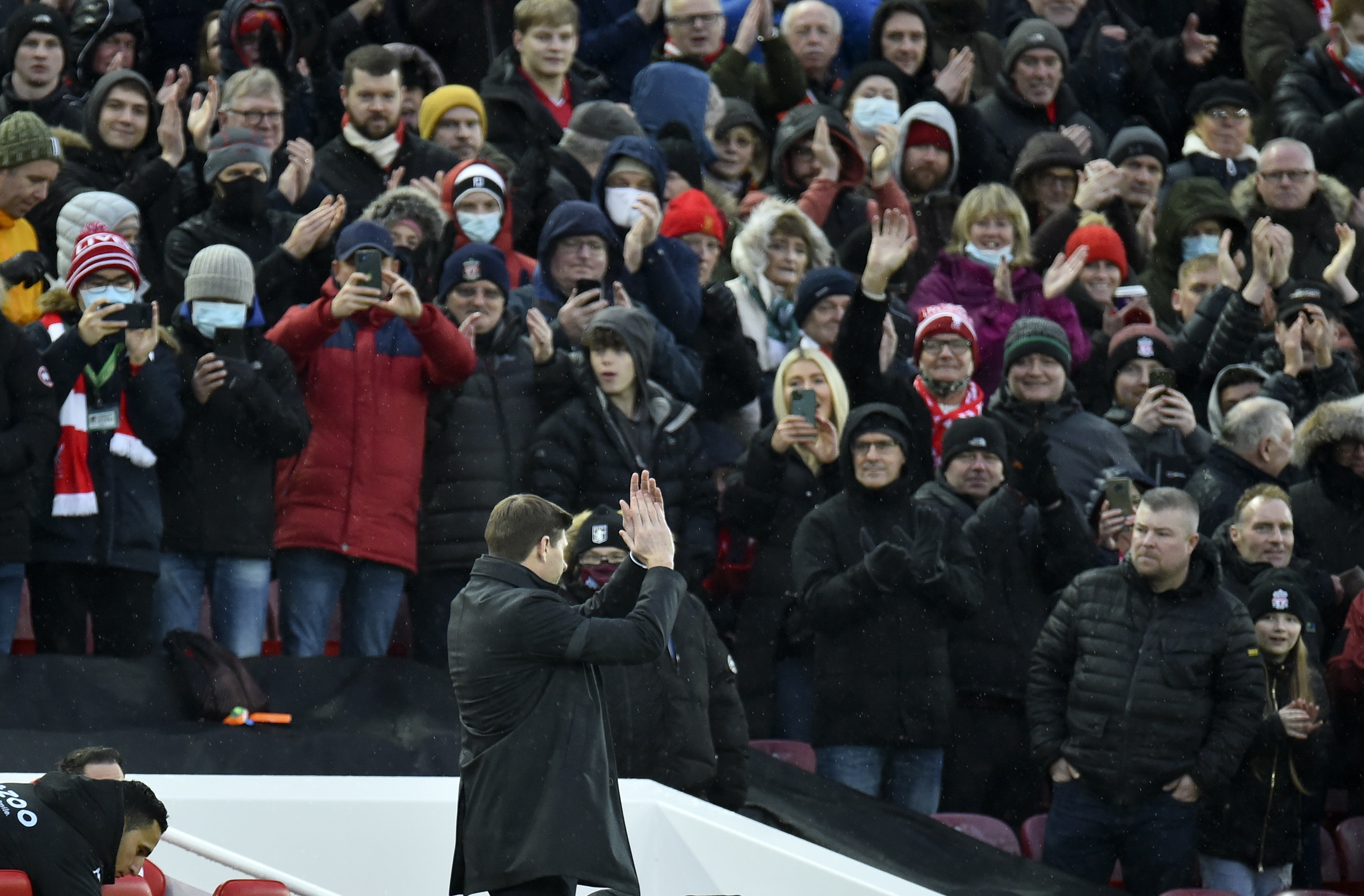 Klopp had his issues as Gerrard’s team, in his fifth game in charge, showed that for him, too, sentiment had been benched.

As Dean Smith’s successor said an hour before kick – off :  “If I’m on the bus heading back down the M6 towards Birmingham and I’m not the most popular at Anfield, so be it.”

Villa backed up that statement of intent as they dug in deep.

Klopp brought in Alex Oxlade-Chamberlain as as opposed to sticking with his new Fab Three with Diogo Jota in between Mo Salah and Sadio Mane.

Yet in a real grind, the Ox hardly hauled his side forward in threatening fashion, the major attacking threat coming from Andy Robertson.

Emiliano Martinez made a smart near post save to deny Salah but the very determination so admired in Gerrard as a player at Anfield was mirrored in the attitude of his team.

Klopp said all the right things beforehand and insisted that Gerrard would one day become Anfield manager.

But he said plenty of other things to fourth official Graham Scott in what seemed a never – ending monologue of complaint over Villas muscular tactics and referee Stuart Atwell’s apparent failure to take retribution for them.

Early in the second half Scott did warn that the clock on his patience was fast winding down over ‘keeper Martinez’ time- wasting amidst what had become a siege. 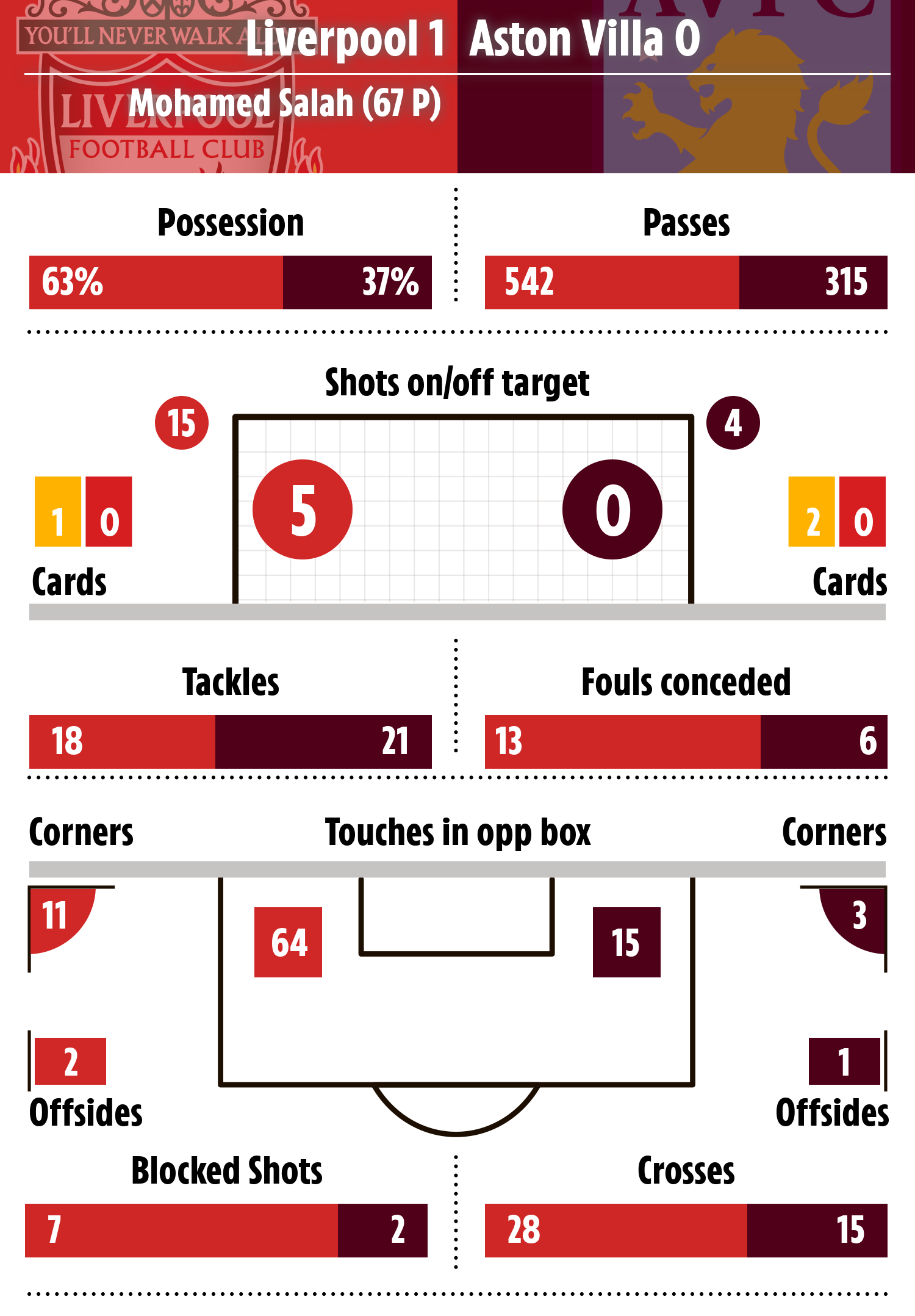 The Argentinian had just tipped over well to deny Virgil Van Dijk’s header and he, like those in front of him, continued to increase Anfield anxiety.

But Jota replaced Oxlade-Chamberlain and Klopp’s move paid off.

Villa  – and Mings – finally saw what would have been a moral victory for Gerrard slip agonisingly from their grasp.