THE Premier League have been forced to release a lengthy statement following the postponement of the North London derby.

Arsenal requested the game be called off due to “COVID-19, existing and recent injuries, in addition to players away with their countries at AFCON”.

Arsenal requested the game be postponed due to a lack of playersCredit: Getty

And it was confirmed on Saturday afternoon that the clash at the Tottenham Hotspur Stadium would not go ahead this weekend.

There is thought to be only a few Covid cases in the Gunners squad.

However, injuries, the loaning out of Folarin Balogun and Ainsley Maitland-Niles, and the red card of Granit Xhaka on Thursday have left them desperately short of players.

And the Premier League have subsequently released a statement explaining their decision.

It read: “Following a request from Arsenal FC, the Premier League Board met today and regrettably agreed to postpone the club’s away fixture against Tottenham Hotspur, due to be played at 4:30pm on Sunday 16 January.

“With Arsenal having fewer than the required number of players available for the match (13 outfield players and one goalkeeper), the Board accepted the club’s application.

“The decision is a result of a combination of COVID-19, existing and recent injuries and players on international duty at the Africa Cup of Nations.

“All clubs are able to apply for a postponement if COVID-19 infections are a factor in their request.

“The League apologises for the inconvenience and disruption caused to supporters who would have attended or watched the game – we are fully aware that postponements disappoint clubs and fans.

“The League aims to provide as much clarity as possible, but unfortunately postponements sometimes have to be made at short notice, as safety is our priority. Where possible, the League will endeavour to keep supporters updated if games become at risk.

It continues: “The Premier League’s postponement rules are designed to protect the wellbeing of players and staff, while maintaining the sporting integrity of the competition.

“Club requests are assessed on a case-by-case basis, based on existing rules and adapted COVID-19 postponement guidance, implemented in light of the Omicron variant.

“The Board examines a number of factors, including the ability of a club to field a team; the status, severity and potential impact of COVID-19; and the ability of the players to safely prepare for and play the match.

“The detail within all applications is scrutinised by the League’s specialist staff before the Board makes its decision.”

The Prem’s statement received a fiery reaction from football pundits.

Gary Neville, who was critical on Friday about a potential North London derby postponement, was not impressed by the decision. 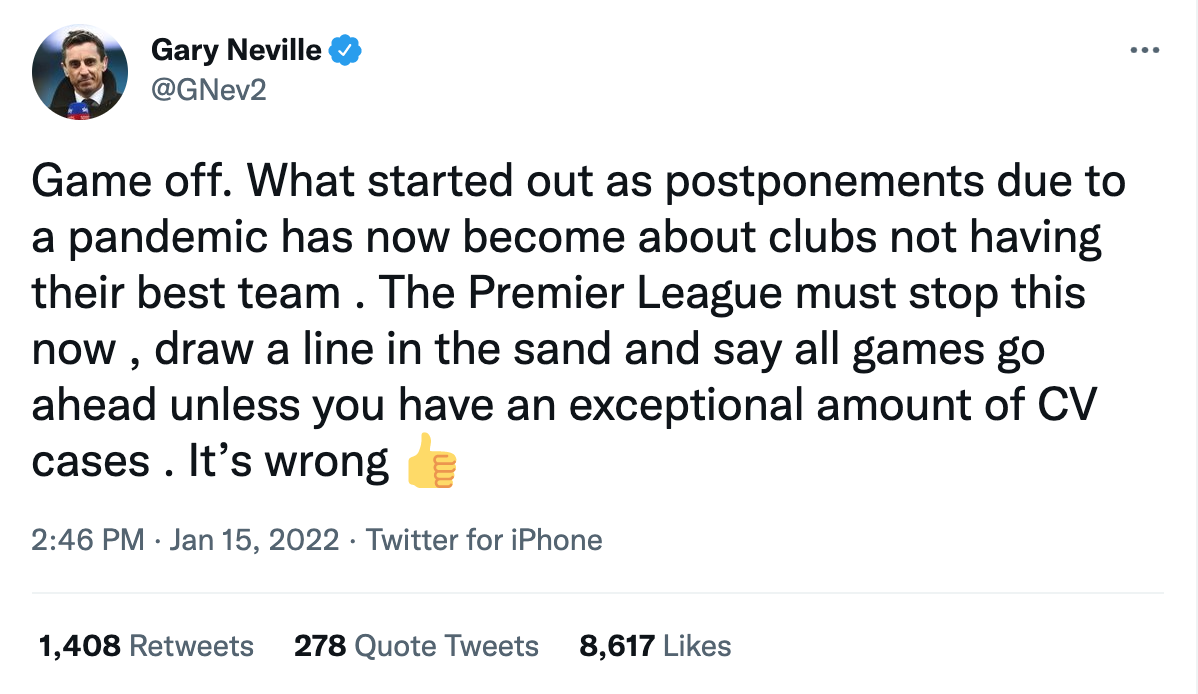 Neville is not on board with games continually being postponed

He said: “Game off. What started out as postponements due to a pandemic has now become about clubs not having their best team.

“The Premier League must stop this now, draw a line in the sand and say all games go ahead unless you have an exceptional amount of CV cases. It’s wrong.”

And former England striker Stan Collymore also called out the Gunners after they called for the game to be postponed.

He tweeted: “Every top club has an A class academy of some of the world’s best players under 23.

“Every top club has an official squad of 25, with conservatively 10-15 pros on top to call upon.

“Every top club has up to 20-30 players loaned out. There is NO excuse to postpone games.

“The Premier League as always have non football people in house that simply do not understand or hear the mood music in the industry.

“You tell a manage he can call a game off arbitrarily in order to rest preferred players, he will. More inept leadership.

“A simple rule change would see every professional player registered with the club and not on loan being “live and active” for first team duty.

“Would sort this absolute shambles out in one go.”

The North London derby is the 20th Prem game to be postponed since Brighton vs Spurs was called off on December 12.