BORIS JOHNSON had not even finished announcing the new national lockdown when Liverpool’s patched-up defence gave Danny Ings the freedom of the South Coast.

The Prime Minister was beginning to tell the country about the latest increased Covid restrictions just as this game kicked off at 8pm. 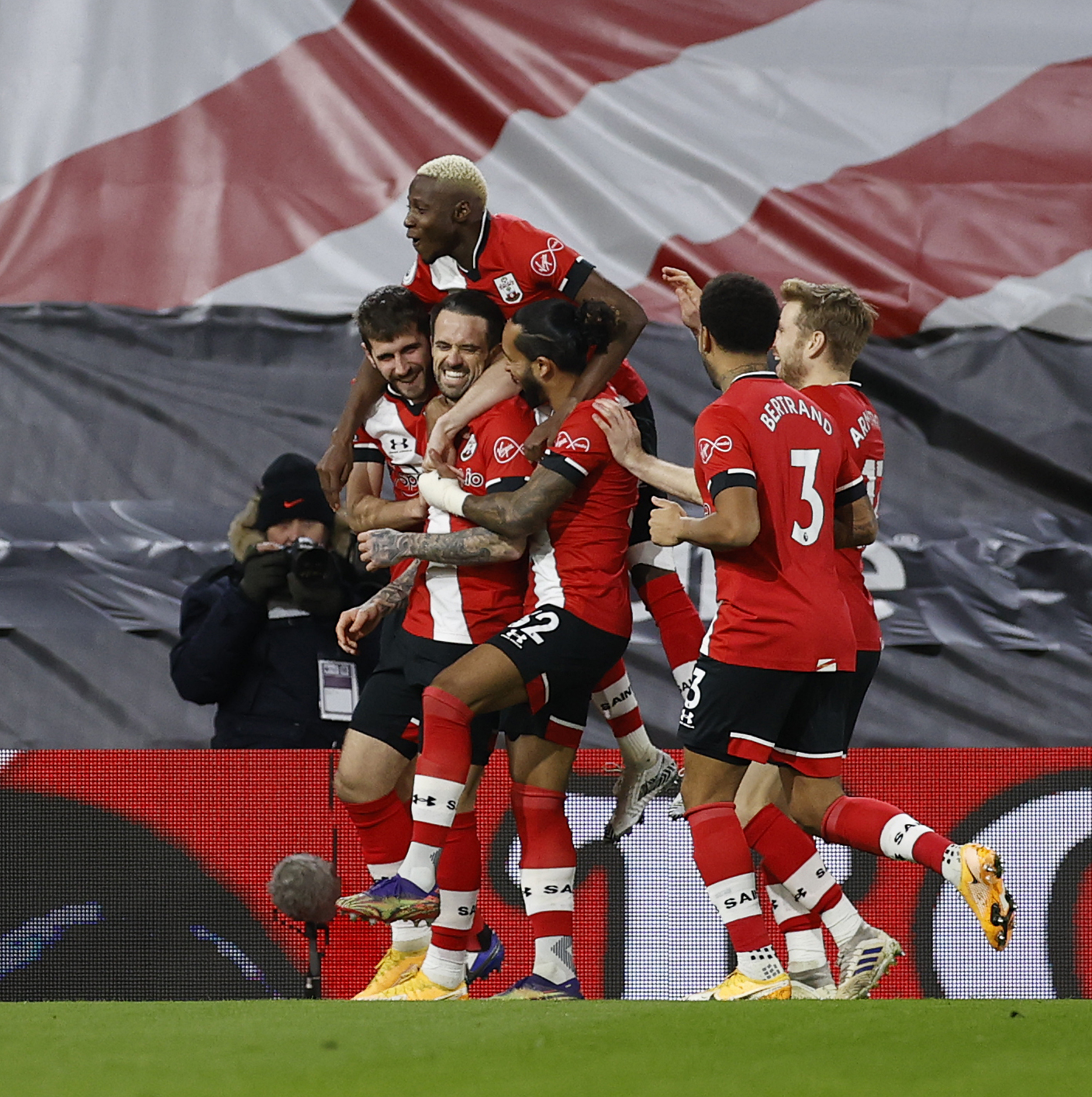 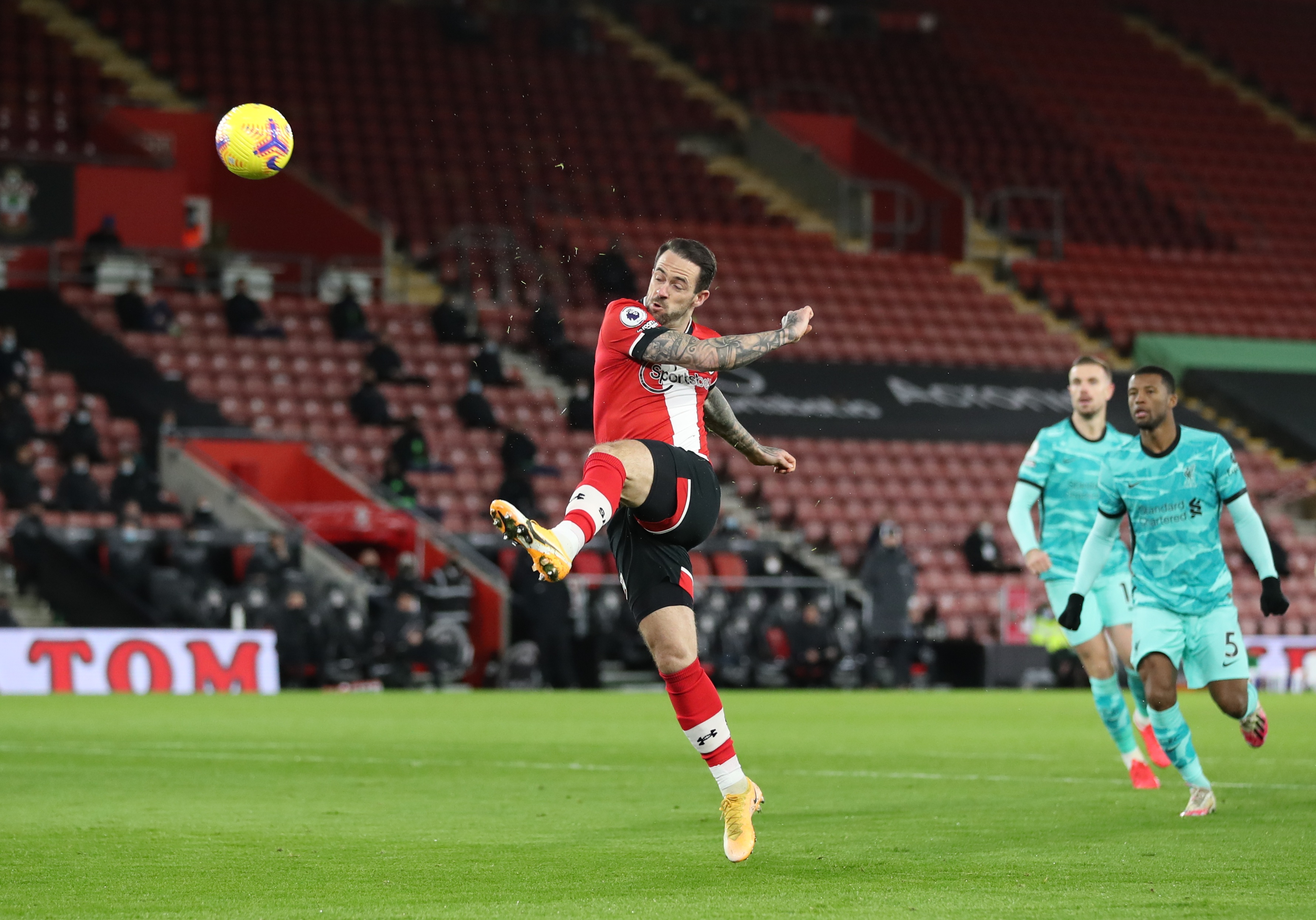 Danny Ings put the Saints 1-0 up with a delightful lob after just two minutesCredit: Reuters

He will barely have had time to utter his opening words as Reds old boy Ings beat the offside trap to lob Alisson inside two minutes.

And while the tiers were scrapped for a stay-at-home message for all, there were tears at the home of Southampton at full-time as boss Ralph Hasenhuttl fell to his knees and WEPT.

Ings’ strike was the England man’s 50th in the Premier League and was clocked exactly at 1min51secs – his fastest ever.

It landed a painful blow to his former side’s bid to retain their league crown and added further weight to the argument that they need a new central defender this month.

Joel Matip’s recent return to the sidelines has left Jurgen Klopp desperately short at the back, following long-term injuries to Virgil van Dijk and Joe Gomez.

Klopp has hinted that he will stick rather than twist this month in the transfer market and has shown faith in youngsters Rhys Williams and Nat Phillips at points this term.

Yet neither were picked here and it was captain Jordan Henderson who lined up with Fabinho, himself also a midfielder by trade. 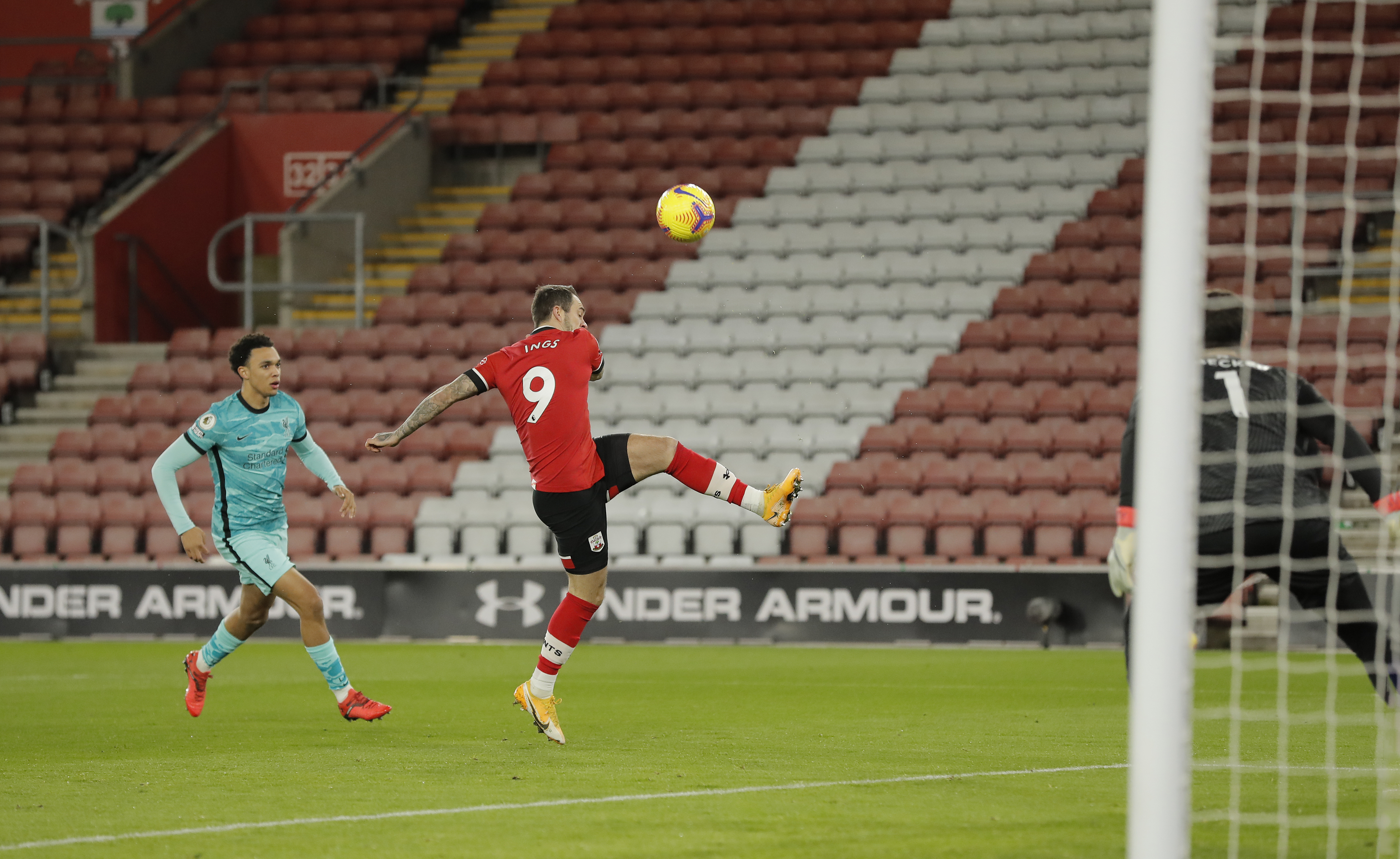 Alisson was rooted to the spot as the ball looped over his headCredit: Guardian News & Media / Free to use by all titles in perpetuity under NMC agreement

Southampton exploited that unfamiliarity with their early goal and could have had more – before holding out with a resolute defensive display after the break.

With the chasing pack consistently dropping points, many had expected champions Liverpool to run away with the title this season.

But an unlikely quartet of draws to weaker sides that started with Brighton and ended in the week at Newcastle has stunted their progress.

Those teams all parked the bus yet there was no way Hasenhuttl was going to let his presserholics do that – which you thought may have played into Liverpool’s hands.

But Klopp’s men made the worst possible start as free-kick expert James Ward-Prowse dropped an angled set-piece over the Reds backline to set away Ings.

The 28-year-old still had much to do as he brilliantly lifted the ball over Alisson with his weaker left foot and into the net.

His celebrations were understated, out of respect for his old club whom he spent three, injury-ravaged seasons with between 2015-18. 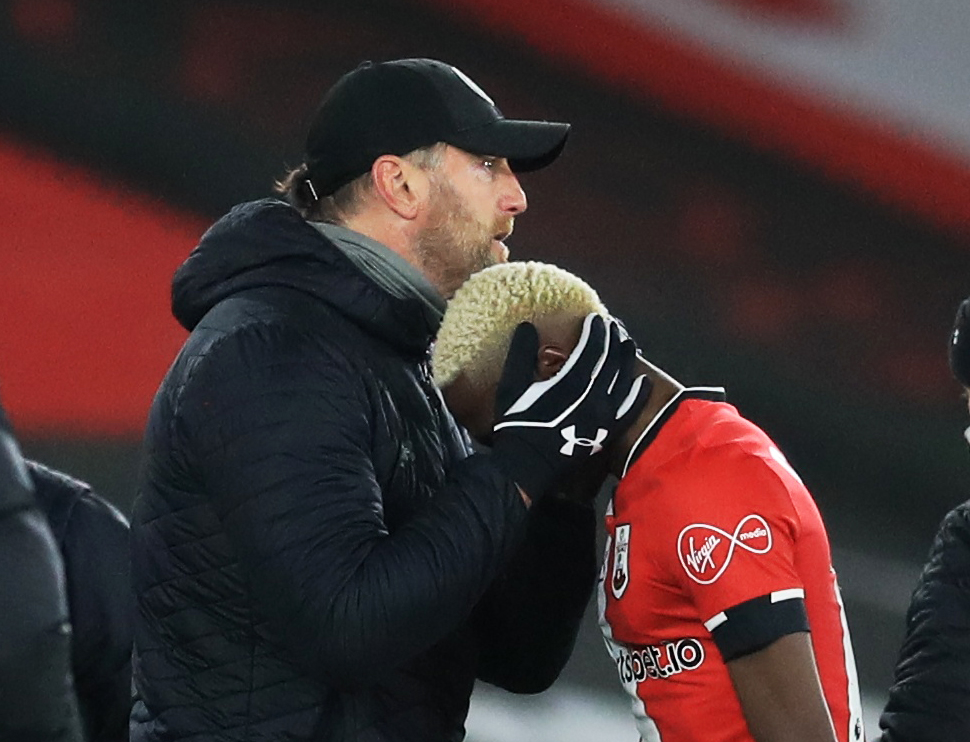 Moussa Djenepo limped off injured in the first halfCredit: Reuters 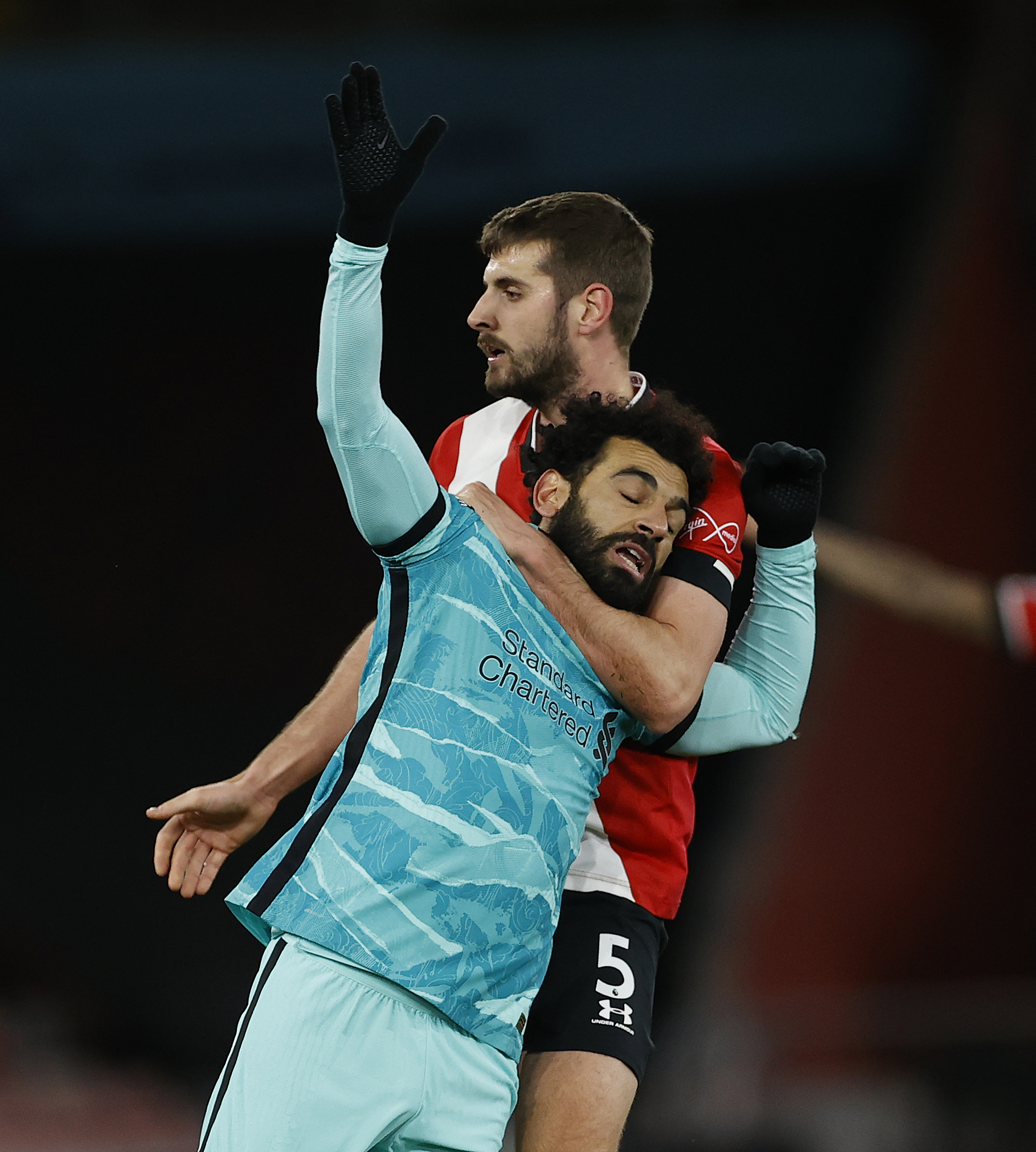 While Henderson’s selection at centre-back was the most notable tactical choice by the two managers, there were a number of others that caught the eye.

They included Thiago Alcantara making his first start since he was injured in the Merseyside derby, the game in which Van Dijk was also careered into by Jordan Pickford.

That knee problem has hampered Thiago’s ambitions of adapting to the Premier League and for all his top-class pedigree, he looked off the pace here.

The Brazilian picked up a yellow card a minute after the opener with a rash challenge on Ibrahima Diallo, while his passing was surprisingly sloppy.

Klopp was livid with his side for their lacklustre start and roared “wake up” furiously on the touchline.

Andy Robertson then drew the German’s wrath after hacking down Scottish team-mate Stuart Armstrong, for which he was rightly booked.

Fraser Forster, making his first Saints appearance for 612 days due to Alex McCarthy’s positive Covid test, will have expected a serious reaction from the champions.

Yet it was the hosts who posed the biggest threat and should have had more.

Moussa Djenepo blasted well over after being teed up by Ings’ stunning hold-up play.

And when the Malian was forced off through a knee injury, his young replacement Nathan Tella came within a whisker of netting with a curling effort from the edge of the box.

Liverpool looked as if they had had a Klopp rocket at half-time and it was one-way traffic from then.

They wanted a penalty within five minutes as Gini Wijnaldum’s shot struck Jack Stephens’ hand but were denied.

Sadio Mane – once of St Mary’s – was their biggest threat, yet whatever he and his team-mates did, they just could not break down stubborn Southampton who put in block after block.

The sheer relief of the final whistle sparked the extraordinary emotions of Hasenhuttl as he cried on his knees.

Despite the defeat, Liverpool remain top of the tree, just. 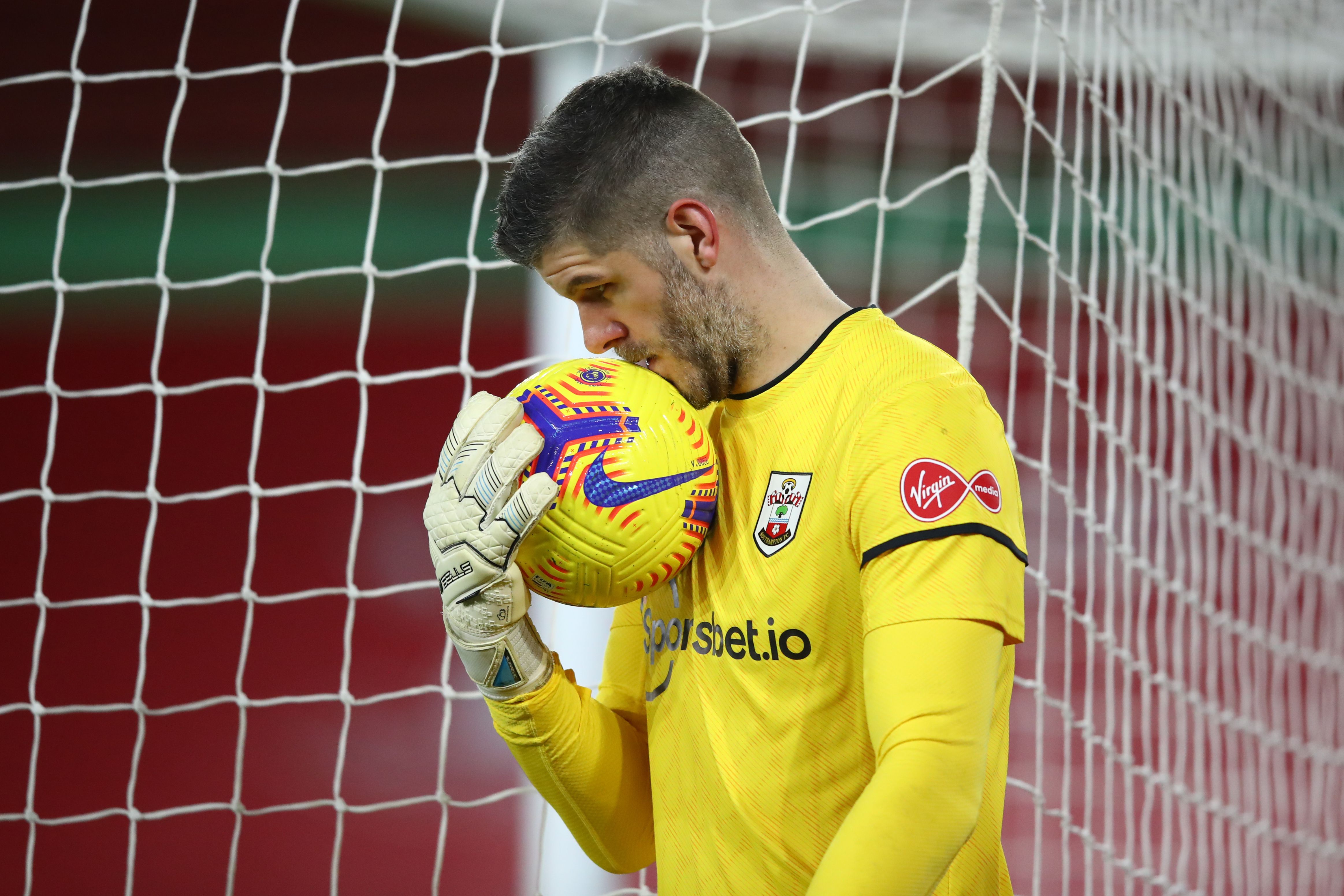 Fraser Forster stepped in for Alex McCarthy in goalCredit: AFP

Man United are level on points and now have a game in hand. Southampton, amazingly, are just four points behind.

What happens next in this most unpredictable of seasons is anyone’s guess.

But that is par for the course in life right now, as Boris’ latest lockdown underlined.