AFTER more than two decades as a top-flight referee, Mike Dean finally got to feel the love. 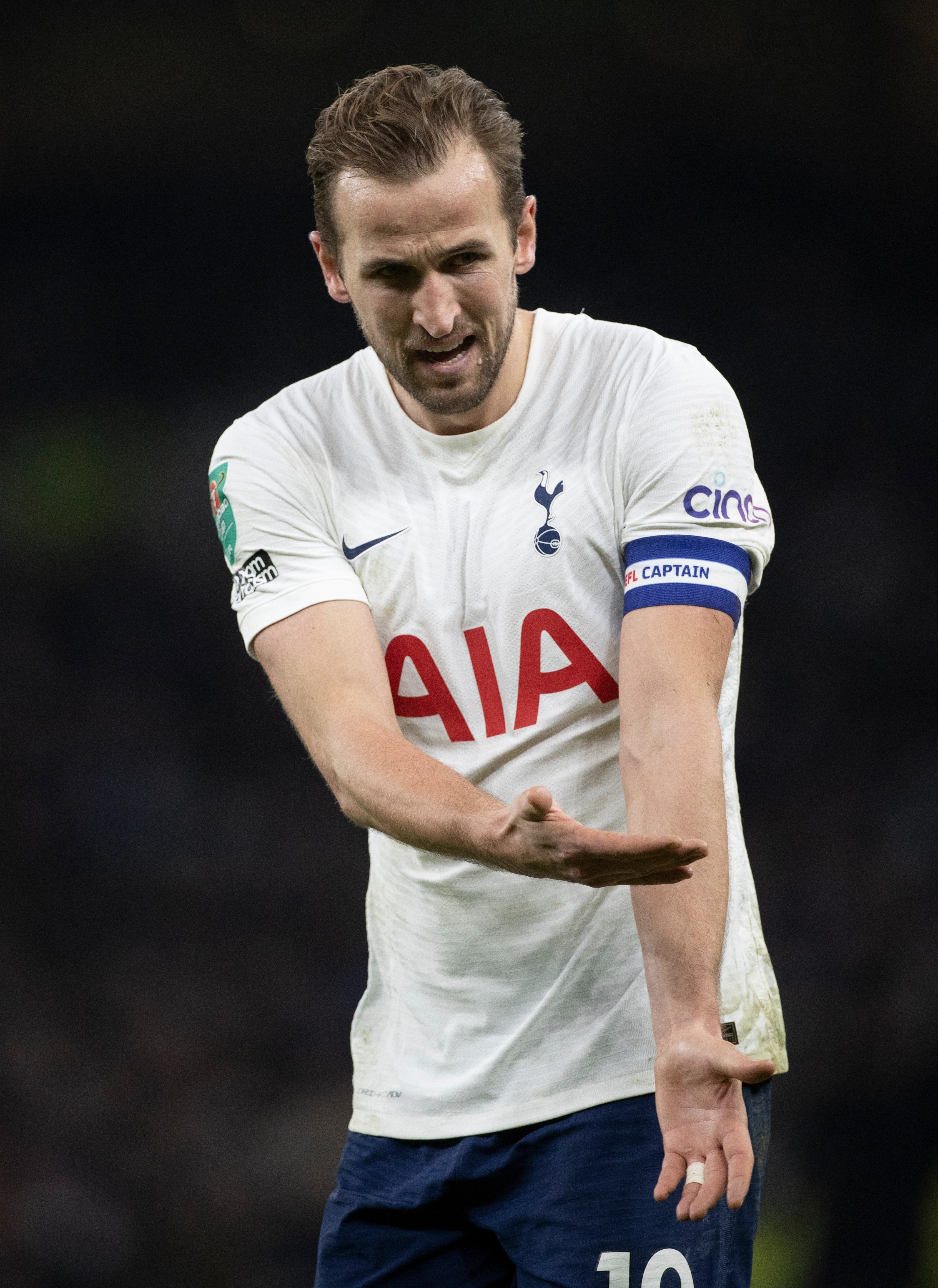 Harry Kane looks on in defeatCredit: Richard Pelham / The Sun

They might have preferred to celebrate a Romelu Lukaku hat-trick instead, but this is modern football and so they made do with celebrating the work of Wirral whistler Dean, who should have been awarded the match ball.

Having dominated last week’s first leg and the first half-hour of this return match, the European champions could have chucked away all their good work had Marriner been working alone.

Spurs boss Antonio Conte had made the bizarre decision to ‘rest’ his captain and first-choice keeper Hugo Lloris for this semi-final – and he saw stand-in Pierluigi Gollini gift Antonio Rudiger an early opener to extend Chelsea’s aggregate lead.

But then it was down to Dean to rule out two penalties awarded by Marriner either side of half-time and then a Harry Kane strike which was scrubbed out for offside.

It was a peculiar old night, with Conte seeming to have run up the white flag before kick-off, only for Spurs to stage a spirited, but unrewarded, fight-back. 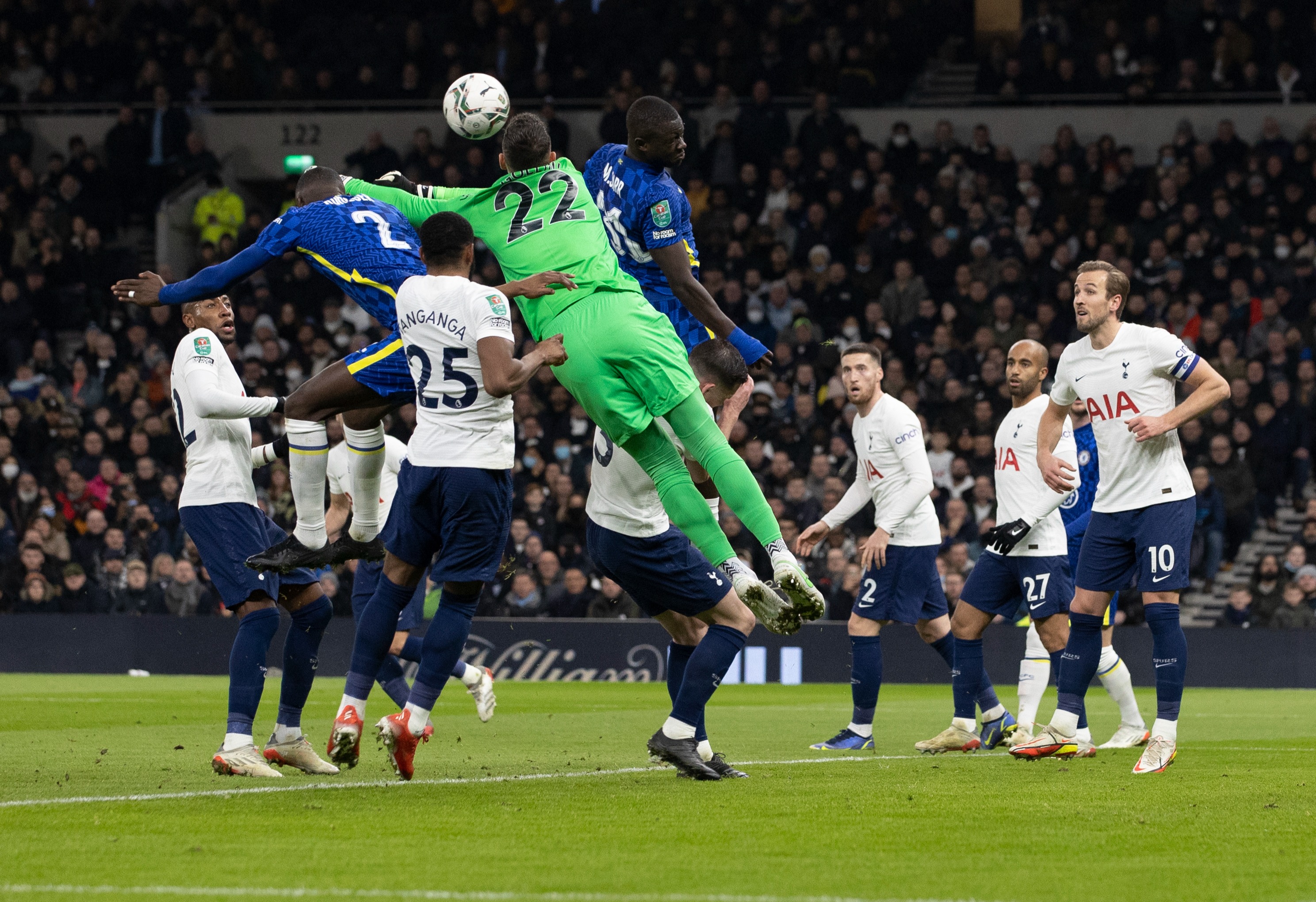 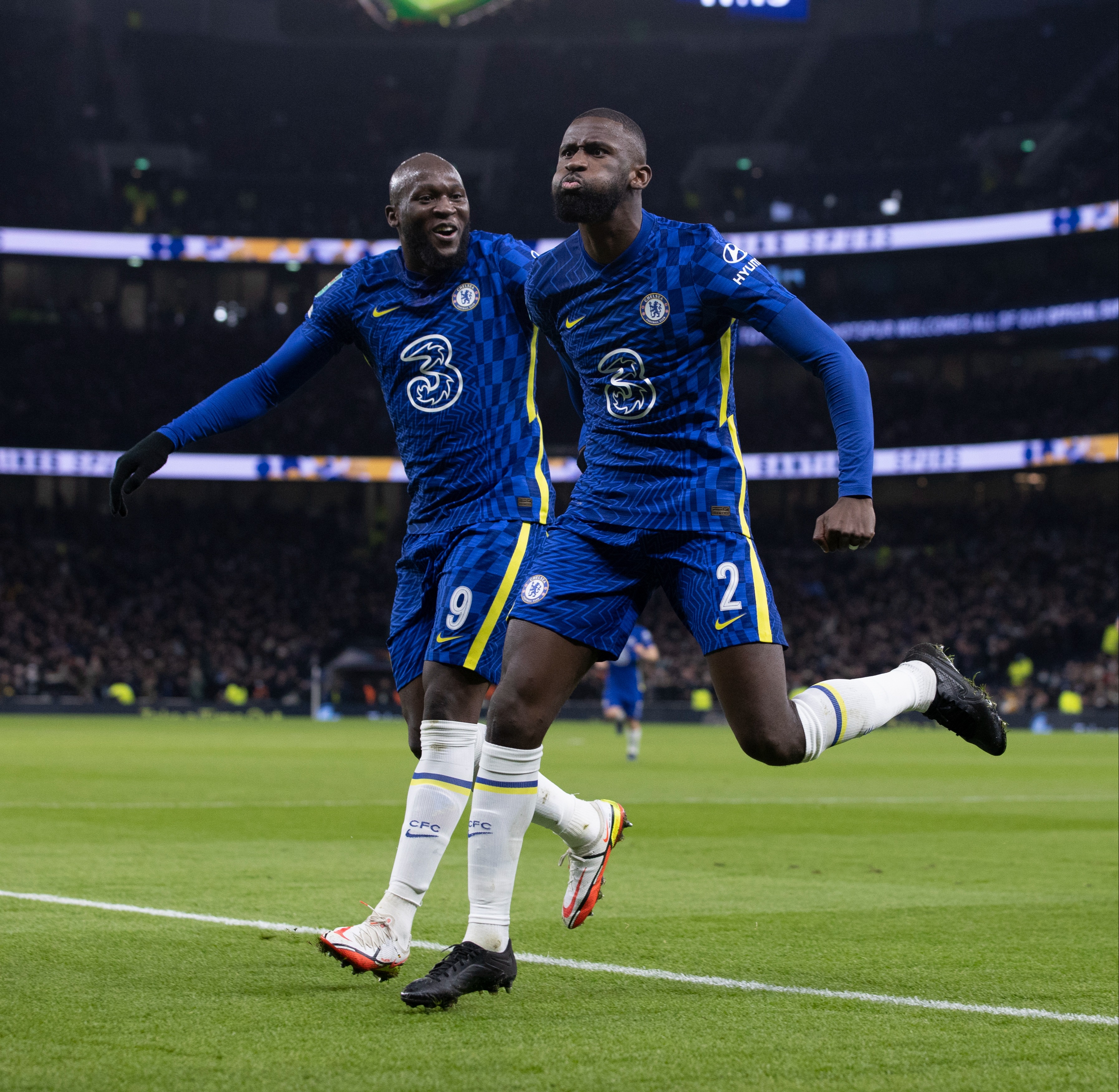 Conte had bemoaned the ‘gap’ in quality between Chelsea and Spurs after the first leg – and he only managed to widen that chasm by leaving out his World Cup-winning skipper.

The Italian claimed he was resting Lloris for league matches, seemingly admitting he had written off this tie. Which, to be fair, was the view of all the rest of us who’d been at Stamford Bridge last week.

But do keepers actually need resting? Don’t they just stand there most of the time?

Perhaps it is simply the psychological strain of playing behind Tottenham’s defence.

But Gollini had played against Morecambe in the FA Cup on Sunday, anyway.

Tottenham’s wonky back-line had handed Chelsea both of their goals in the first encounter – with Lloris playing a major role in keeping the deficit down – and this time it was Gollini who dished out the generosities.

And on 18 minutes, they extended their aggregate lead when Mount swung in a free-kick and Gollini staged a kamikaze mission, flying off his line, missing the ball and allowing Rudiger to score with a back-header which did not look particularly intentional. 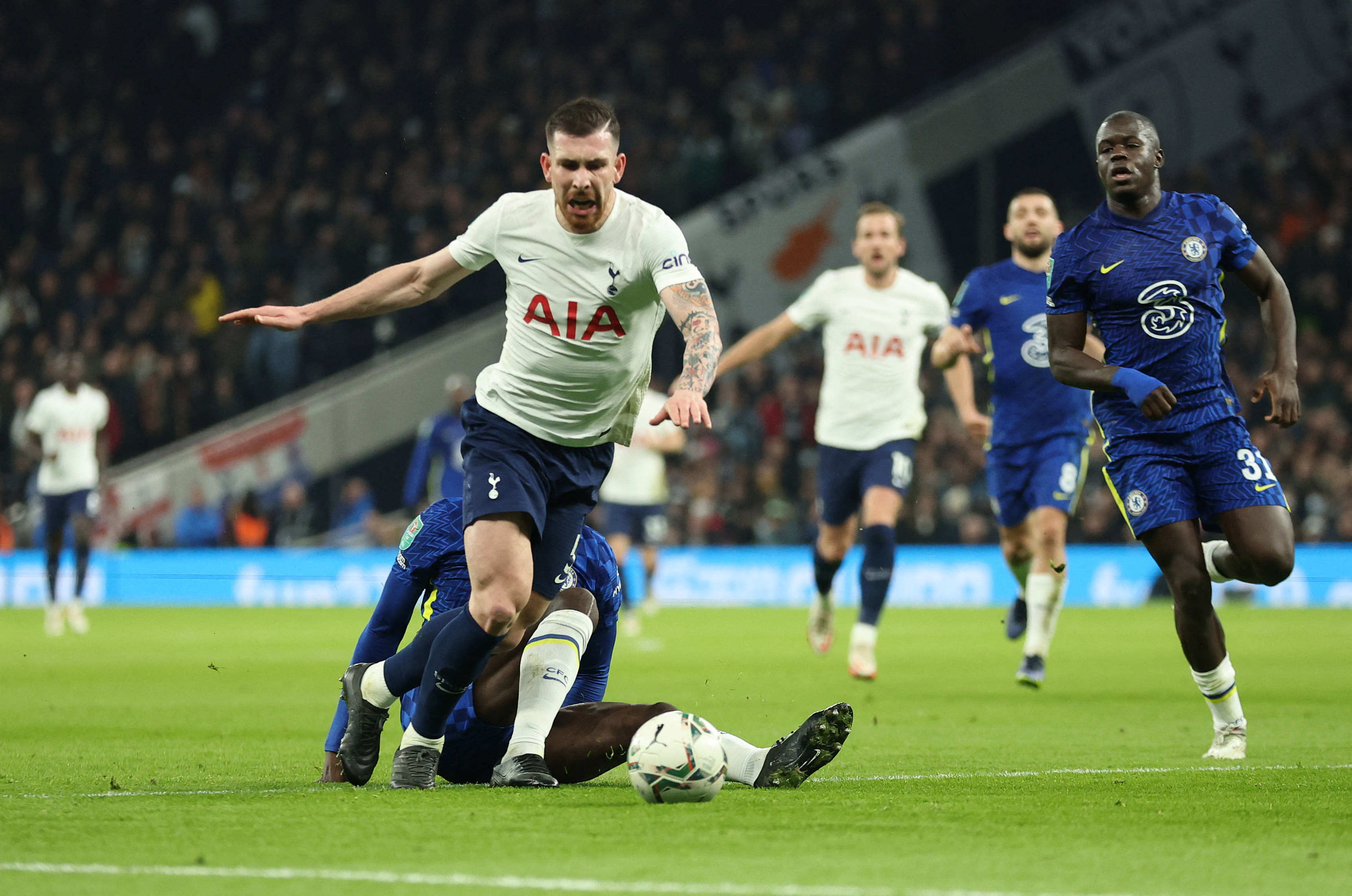 Pierre-Emile Hojbjerg goes down from an Antonio Rudiger challengeCredit: Reuters

The Chelsea fans were constantly chanting ‘Tottenham get battered everywhere they go’ – a song which has become such a national earworm that people with no affinity to any of Spurs’ rivals have taken to singing in the street.

The opening half-hour had been every bit as one-sided, every bit as embarrassing for Spurs, as the first leg.

But then, suddenly, Spurs woke up and joined in.

Pierre-Emile Hojbjerg had a curling shot deflected narrowly wide and the resulting from Giovanni Lo Celso corner, Davinson Sanchez headed on and Kane dived in at the post to poke wide.

Kane, as is his wont, tumbled for a penalty shout which failed to sway Andre Marriner.

But soon after, Marriner was pointing to the spot when Rudiger upended Hojbjerg.

Dean took a long while to decide what was clear and obvious on the replay – that Rudiger had made contact outside the box and then thrown himself inside the 18-yard line.

But eventually Dean did over-rule Marriner on the line call and Lo Celso’s free-kick was deflected over by the wall. 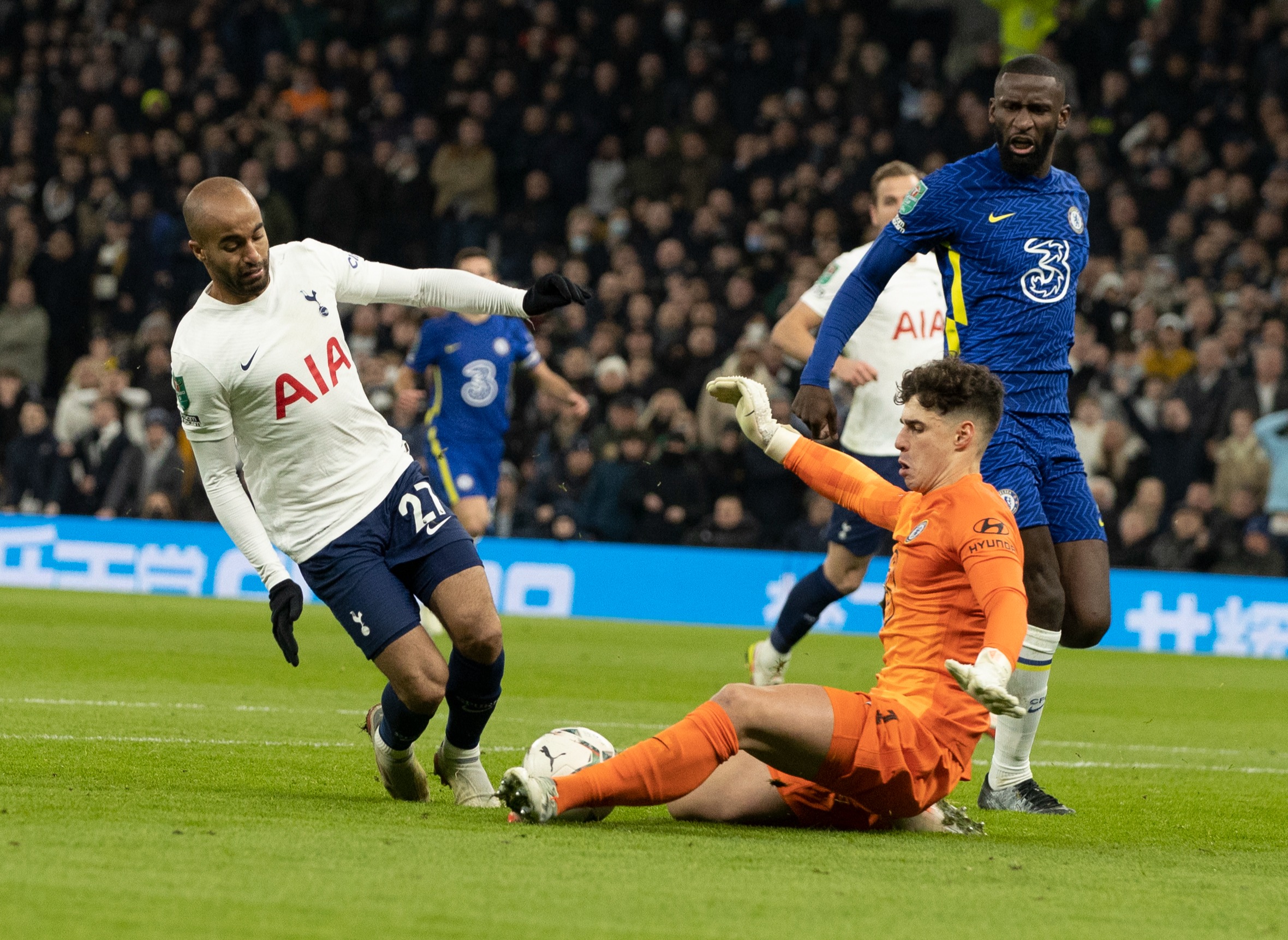 Twelve minutes after the break, Marriner – who seemed determined to make this tie interesting – was at it again, handing Spurs another erroneous penalty.

This time, Kane surged clear from the halfway line, batting off Rudiger – no mean feat – and feeding Lucas Moura.

When the Brazilian sprinted into the box, keeper Kepa Arrizabalaga met him with a sliding tackle which needed to be perfectly-executed.

Marriner didn’t think it was but Dean did, sending the ref to his monitor, where he changed his mind.

Kepa’s chief League Cup memory was his extraordinary refusal to be substituted in the 2019 final – but this was a crucial positive intervention from the Spaniard.

But with Kepa off his line, there was only one Chelsea defender between Kane and the goal-line and so Dean completed his treble and the away section descended into joyous bedlam.

Should Chelsea overcome Arsenal or Liverpool at Wembley on February 27, will anyone remember Dean’s outstanding contribution?

Perhaps not but Dean himself would greet it with a knowing smile and a little punch of the air.

This was the night he had been waiting for. 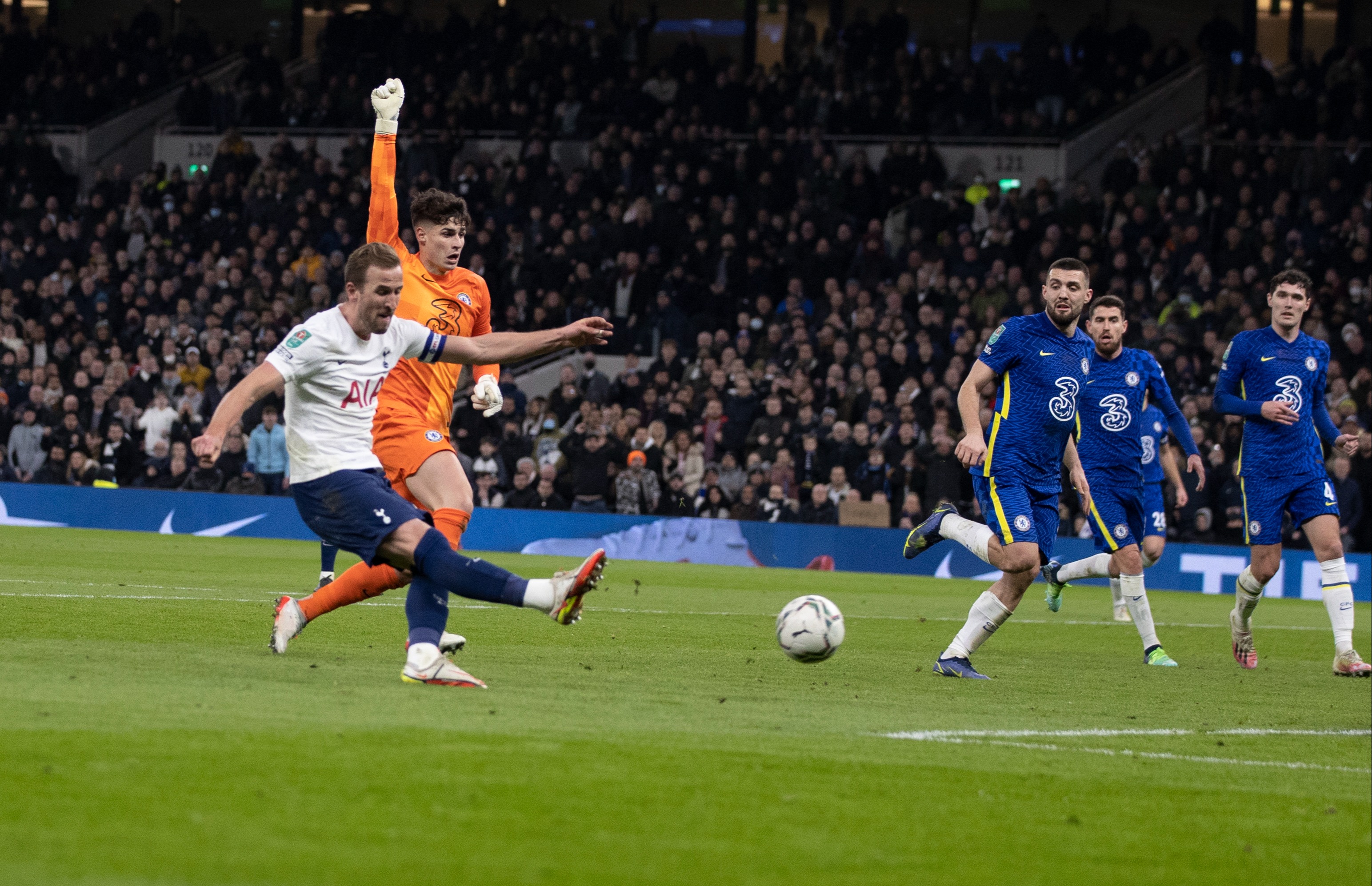 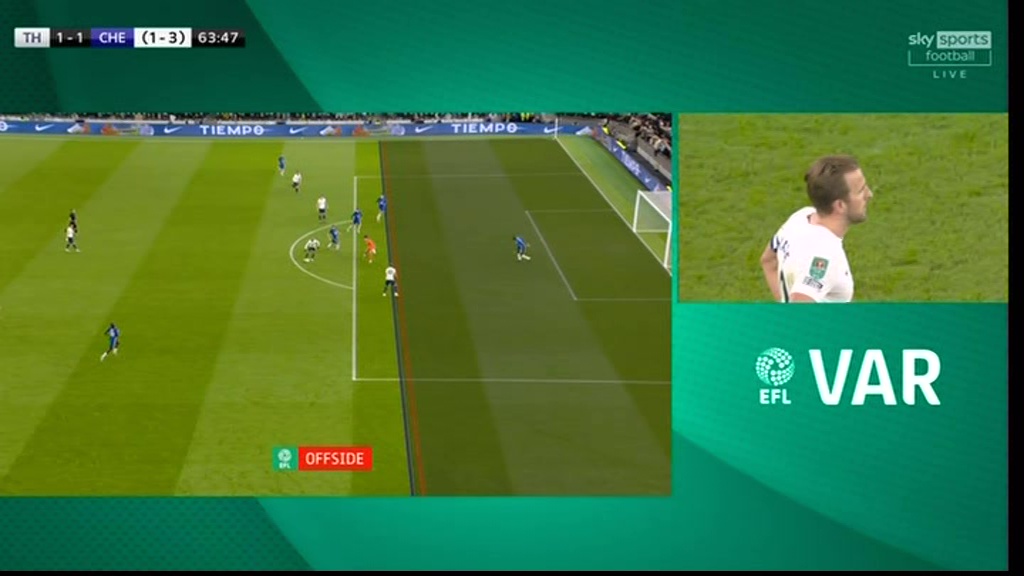