Mourinho is on track to deliver the goods after Spurs booked their spot in the Carabao Cup final with a 2-0 win over Brentford on Tuesday night.

Poch, 47, worked wonders at Spurs, taking them from mid-table mediocrity to the Champions League final in just five years on a threadbare budget.

Yet five months after that evening in Madrid – a 2-0 loss at the hands of Liverpool – the Argentine was sacked.

Mourinho 56, was introduced as Pochettino’s replacement in November 2019 on a three-and-a-half year deal as Levy finally decided enough was enough.

The self-proclaimed Special One has a knack of winning trophies – with 25 to his name during his illustrious career.

Tottenham haven’t won a single thing since the League Cup victory of 2008, with Mourinho winning 13 trophies since that day.

But the Portuguese boss has an uncanny knack of winning trophies in his first FULL season at a new club.

Mourinho burst onto the managerial scene in his third job, at Porto, initially hired in January 2002.

In his first full campaign, the 2002-03 season, Mourinho won the TREBLE – the Primeira Liga, Taca de Portugal and Europa League.

Jose Mourinho has got his forwards firing on all cylinders this seasonCredit: Getty – Pool

He would of course lead Porto to Champions League glory just 12 months later.

His success earned him a move to newly-rich Chelsea for the start of the 2004-05 season – where he won the Premier League and League Cup in his first year.

After his spell in England came to an end, Mourinho joined Inter Milan… and promptly won the Serie A crown at the first attempt.

The Portuguese chief’s continued success saw him move to the Galacticos, Real Madrid – and clinch the Copa del Rey in his debut term in Spain.

In the summer of 2013, Mourinho moved back to Chelsea for a second stint, where his hot streak of trophies in his first full was season was snapped.

The Blues lost the Super Cup final, having won the Europa League months earlier under Rafa Benitez, and were knocked out of the FA Cup and League Cup in the fifth round.

Chelsea only managed to finish third that season too, while getting knocked out of the Champions League in the semi-finals.

Nine months after being sacked by the Blues for a second time, Mourinho signed a three-year contract at Manchester United, starting in the 2016-17 season. 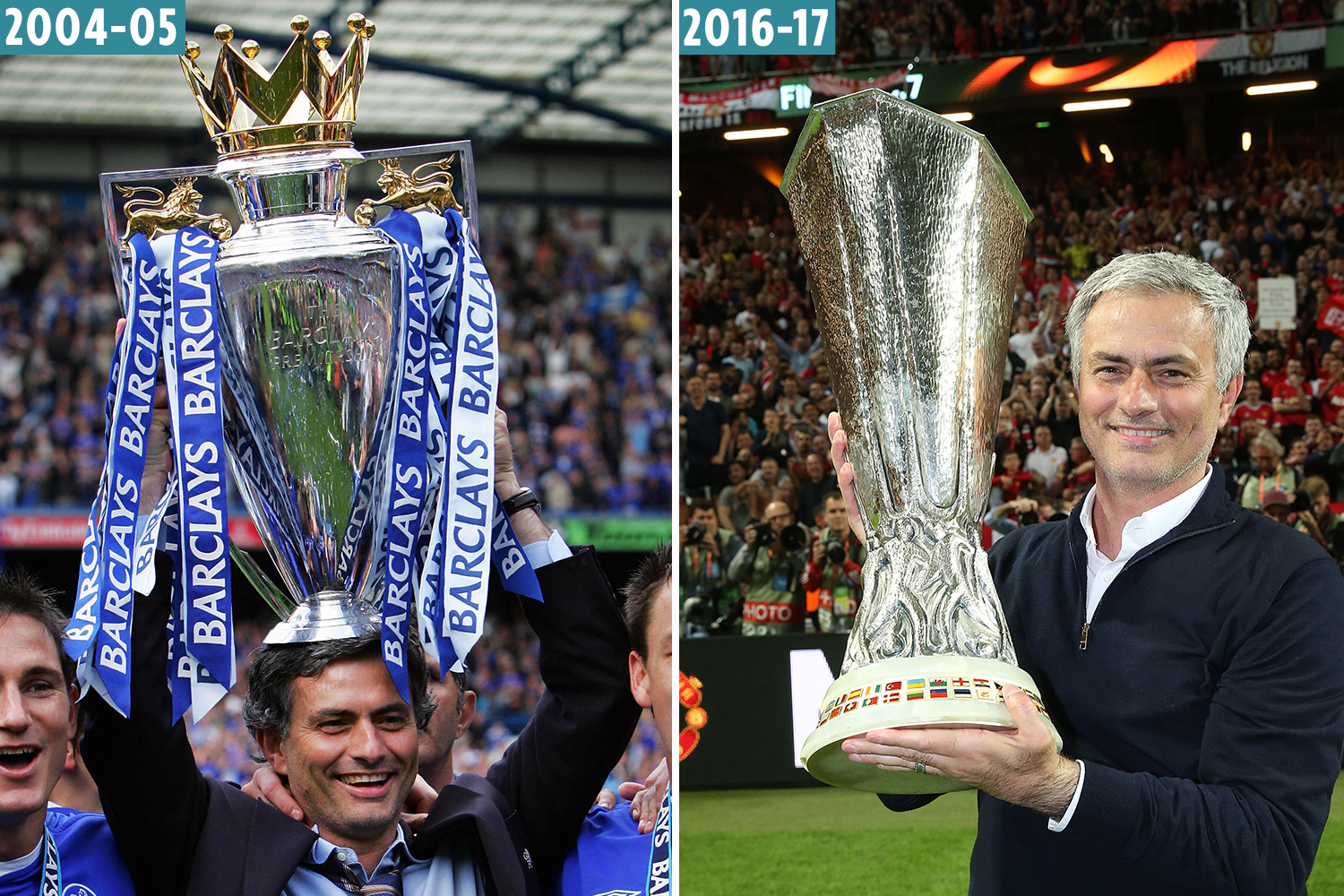 The Special One quickly got back to winning ways too, leading the Red Devils to Europa League and League Cup glory that very season.

Mourinho guided Spurs to sixth in the Premier League last season, with 16 wins in 38 attempts.

Tottenham are now just ONE game away from securing their first trophy in 13 years following Tuesday’s home win over Brentford.

After the match, Mourinho claimed the club had been rewarded for taking the Carabao Cup seriously.

He said: “I came to England in 2004 and I remember that in that period I had to learn the meaning of the cups here and I always took it seriously.

“That’s what I hope to do on Sunday in Crosby against Marine [in the FA Cup].”

Tottenham will battle it out with either Manchester United or Manchester City in the final in April at Wembley.