Ninja sim Aragami undergoes a major overhaul in this expansive sequel, but changes to the formula don’t always benefit the art of assassination.

The original Aragami was all about sticking to the shadows. Released in 2016, the third person action stealth title from developer Lince Works is considered one of the better ninja sims of recent years, with stylish cel-shaded visuals and satisfying stealth mechanics, where darkness was vital for slinking through the environment to get the perfect kill.

For the sequel, hiding in the dark isn’t a priority. You’re no longer teleporting from shadow to shadow, trying to avoid light sources which drain shadow essence, but moving around sandbox levels freely at the mercy of a brief cooldown. This is one of many adjustments in Aragami 2 which aims to build upon the original’s scope and broaden accessibility, but by sanding off its quirkier edges some of the original’s personality has been lost in the process.

The benefit is that, for newcomers, Aragami 2 is a valid jumping on point. Set 100 years after events in the original, the sequel returns to the Japan-inspired fictional world where Aragami ninjas are facing the threat of the Akatsuchi Empire. You play as Kurai, the last hope of the Kurotsuba clan, who sets out to deal with the invading forces, protect their village, and rescue civilians from capture.

You don’t need prior context to follow Aragami 2’s story, but the sequel puts little effort into selling the narrative. There’s occasional cut scenes, but you’ll mostly digest lore through brief, perfunctory text exchanges with characters around the hub village – where you pick up quests, customise your ninja and upgrade abilities. The story isn’t an essential component of Aragami’s appeal, but it does feel like a wasted opportunity; especially as you return to the village after every mission, with little charm and few compelling characters to spice up repeat visits.

Aragami 2’s structure is largely built on this repetition. You select a quest, assemble items like health potions and smoke bombs, before jumping into the designated level. Missions vary from eliminating targets, rescuing captives, or swiping supplies, but the crux of the gameplay is sneaking around, taking out guards and escaping. You’ll often return to the same levels with different tasks, which changes enemy placements and sometimes expands the map – so you’re always faced with something new despite being in the same environment.

There’s just enough gameplay variables to stave off the repetitive nature of missions. As you level up, abilities are unlocked in the skill tree, like a whisper to draw enemies closer, which can be upgraded by applying additional skill points. There’s a nice sense of progression, where return visits to levels become easier the more skills you have, which allows you to experiment in how you dispatch or manipulate the enemy guards on subsequent runs. You can team up with two other players online too, if you fancy stealth action with an extra layer of chaos. 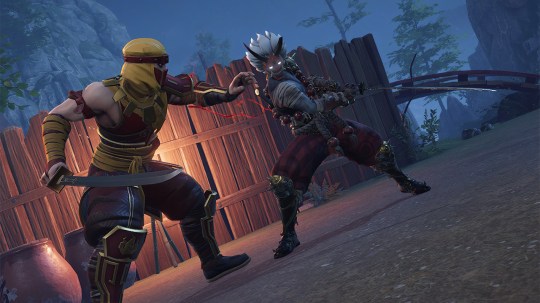 A big change for the sequel is the introduction of direct combat, featuring a parry system similar to Sekiro: Shadows Die Twice. Unlike the original, you can now fight back if you’re spotted, which creates more options when stealth tactics go awry. The combat, however, is serviceable more than enjoyable, and feels too clumsy to be used as a reliable alternative to stealth. In the early chapters, the system is treated as an avoidable, unwieldy last resort, but certain later missions involving boss battles require you to engage in face-to-face combat – pushing all its unrefined qualities to the forefront.

The frustrations in combat carry over to the game’s performance. Aragami 2, even on PlayStation 5, suffers frequent screen tearing and bugs. The most egregious is how shadow teleporting to a ledge, which often requires precise timing to swoop in for a kill, will sometimes throw you back to a building at the other end of the map. These incidents make you thankful for the poor enemy artificial intelligence, with guards who are weirdly unperturbed by pools of blood on the floor and, for the most part, give up chasing you after dashing from the immediate area.

This is a shame because the stealth action feels slick and swift when it’s running optimally. All the conventions are here, like tall grass patches to hide within and rigid enemy walking patterns to exploit, and your character’s improved manoeuvrability makes traversing environments and bloodily executing guards consistently fun. Throw in shurikens, literally, and other destructive tools, and Aragami 2 does a great job of pulling off its ninja sim credentials when it isn’t marred by technical limitations.

But while some of the sequel’s additions improve the experience, the majority of changes feel like a step backwards. The most perplexing is swapping the original’s crisp cel-shaded visuals for realistic, polygonal graphics – swapping a distinctive style for a much drabber and more generic one. Coupled with the uninspired narrative delivery and Aragami 2’s presentation makes the game feel duller than it actually is.

Between the inspirations from Monster Hunter, Sekiro, and Assassin’s Creed, Aragami 2 feels like it’s lost its identity in the mix. There are solid stealth mechanics underneath, and missions are breezy enough where you’re often compelled to play for one more round, but with too many unpolished missteps thrown in, this sequel feels like a shadow of its former self.

In Short: A bigger, more ambitious stealth sequel which revamps the original’s mechanics and personality but most of the changes are to the game’s detriment.

Pros: Stealth gameplay is still enjoyably solid. Lots of great upgrades and abilities to mess around with. Levels are generally well designed and fun to navigate.