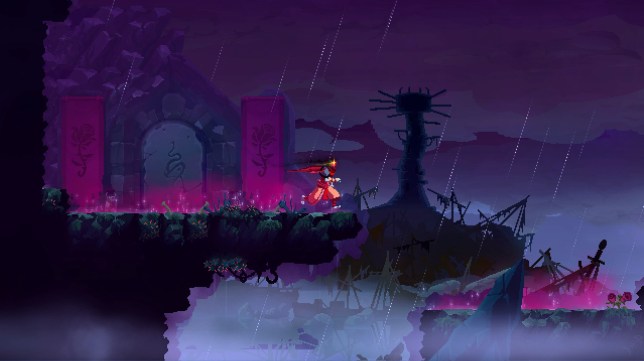 One of the best indie games of recent years gets another bite-sized expansion as its superb post-game support continues.

Originally released in 2018, Dead Cells is a roguelike action platformer set in a beautifully drawn, side-scrolling 2D world. Although it starts out with Metroidvania leanings, it only takes a handful of runs to unlock everything you need to see the whole game, the next step being to acquire the rest of its fabulously wide-ranging cornucopia of weapons, shields, and outfits – and the skills needed to use your growing and increasingly surreal arsenal effectively.

It’s that last stage that takes time and committed players can easily spend hundreds of hours chasing elusive boss cells earned by defeating final boss The Hand of the King. Each new boss cell ratchets up the difficulty, not just in terms of the toughness of enemies but also in where you encounter them, and the lack of healing potions available to undo any mistakes you make along the way.

Dead Cells distances itself from other roguelikes in a number of ways, the first being its pixel perfect control. Although not much like Dark Souls in terms of setting and graphical style, the frequency of death and the apparently granite-like difficulty are similarly offset by controls that are so flawless that when death does arrive, it’s always your fault and always a learning experience for your next attempt.

Another important diversion from the run of the mill is the extraordinary success of its procedurally-generated levels, which manage to retain a distinct personality and sense of character despite being randomly assembled each time you play. Far from the artless hodgepodge of rooms, monsters, and dead ends that most procedural generation seems to throw up, Dead Cells’ levels are consistently surprising and delightful.

The game’s final distinction is the generosity and frequency of its updates, which regularly add everything from new levels and weapons to fresh monsters and features. You’ll frequently see a mysterious door or piece of level furniture, only to find out days or months later that it had a purpose – just not one the developers had added yet. Or, alternatively, that they had activated long ago, but it just wasn’t available for your paltry level of boss cells.

It’s a process that manages to keep the game feeling eternally fresh, and Fatal Falls is only the second paid-for DLC since launch, even though it’s benefitted from dozens of free updates over that period. This one sees the addition of three new levels, one of which amounts to a single room with a boss fight, and as ever each area is cleverly interconnected with the rest of the game’s now labyrinthine architecture.

The first new biome you’ll encounter is Fractured Shrines, accessible after defeating the game’s easiest boss, The Concierge. It’s a series of precipitous platforms suspended in mid-air, some of which wobble and fall away when you step on them. The traps and enemies you come across are all single-mindedly focused on knocking you off to your doom.

New foes include the zombie-eyed Myopic Crow; the snake-like Cold Blooded Guardian, who chucks long spears at you before teleporting in to recover them; and treasure room-defending Stone Guardians, who are huge and very fast but will be straightforward to dismiss for anyone proficient with a shield.

Surviving Fractured Shrines gives you access to Undying Shores or at least it does on subsequent runs, because you can only unlock its door once you’ve found the Cultist outfit, which you have to put on at the tailor’s shop in the first room of the game. There is an alternative way of unlocking it, which we would never be churlish enough to spoil, but as with other locked doors in Dead Cells, once open it remains that way on all future runs, no matter what your character’s wearing.

Festooned with bubbling test tubes and broken specimen jars, the dimly lit world of Undying Shores soon gives way to a rain-lashed exterior that you explore by descending deeper and deeper down the walls of its pit. The sole new monster here is the Apostate, who take swings at you with their lantern and can revive downed enemies. They’re always your first priority when you meet one, or you can end up fighting a relentless cohort of undead.

After that it’s off to The Mausoleum, a single room level where you battle new boss The Scarecrow. Fighting with twin scythes that can be unlocked for your own use, and which it intermittently boomerangs around the room, it also ducks underground, popping up to hack at you with a razor-sharp shovel, and hovers above, attempting to impale you with a sharpened gardening fork.

There’s also a selection of new weapons and outfits, and a fresh set of lore rooms to explore, the game’s way of imparting its back story and details of the ‘malaise’ that infects enemies and your character if you’re not careful. But at heart this simply adds even greater diversity to your options for each run, whether that’s routes to The Hand of the King or potential new favourite swords and powers.

On its own Fatal Falls doesn’t particularly stand out from the existing splendour and complexity of Dead Cells’ world, in fact it blends neatly into the game’s mix of biomes and areas – each of which has its own personality, mix of enemies, and difficulty level. What it does manage is to continue the unblemished record of high quality updates from a developer that continues to support its most famous game in truly exemplary style.

In Short: Another excellent expansion filled with new weapons, powers, and extra levels, as Dead Cells continues to have some of the best post-game support in gaming.

Pros: The new levels have their own unique character and connections with the rest of the world, with some extremely useful weapons. Quality remains high throughout.

Cons: If you’re feeling spoilt by all the free updates this one isn’t dramatically different from many of the freebies.