GameCentral takes a first look at FIFA 23 and learns that it is, in fact, a FIFA game – one that is subject to all the usual pros and cons.

After almost 30 years, EA is finally preparing to release its last ever FIFA game. Not because of a drop in popularity – far from – but because of arguments with FIFA over the cost of using their name. That means next year EA Sports FC will be the new game and while a new FIFA title may be released it will have nothing to do with EA.

For FIFA 23 though this is just another year, since there’s nothing special about the game itself – only its circumstances. Having now gone hands-on with a final version of the game it’s clear there are some intuitive and pleasing additions, but there are also more than a handful of disappointing moments from our initial few hours.

EA has now managed to integrate player statistics to the point that there’s now a noticeable difference in the gameplay and feel of each footballer, and whilst this is an impressive feat, it happens so regularly that you look at the turning circle of certain players and think to yourself, ‘How on earth are you meant to be a professional footballer?’

Including statistics that allow you to feel the difference in areas where a player might excel or fall short is a great accomplishment, but it quickly becomes frustrating when that creates an unrealistic skill drop for certain players, especially when starting career modes with lower league teams.

On the other hand, the HyperMotion2 technology is genuinely impressive. The way in which real world matches and training sessions have been captured and directly translated to in-game animations ensures play sessions now feel much more immersive.

The AI learns as you play, analysing the best animations for your play style and the in-game action as it happens, creating a seamless and more believable game.

This all comes together very well when combined with the gameplay, but it would make for a much more authentic experience if the controls were as responsive as the HyperMotion2 technology.

On several occasions, especially at higher difficulties, FIFA 23 seems to deliberately opt for the wrong response or just straight up ignore inputs when you’ve clearly chosen to do a specific move. This could be down to sheer gaming ineptitude on our part, but since the basic controls are the same as ever that seems unlikely given the problem simply doesn’t happen at lower difficulties.

It seems that despite the budget and innovative technology behind the series, the same mistakes continue to be made – with the focus placed on shiny new features rather than old creases that need a serious ironing out. 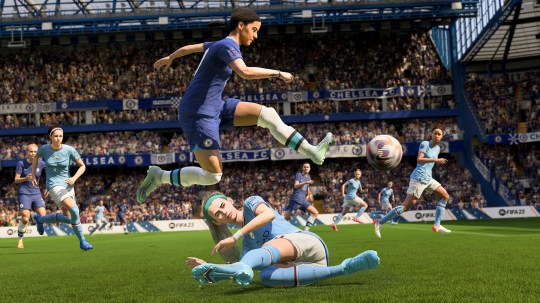 FIFA 23 – the question now is how different EA Sports FC will be (pic: EA)

Perhaps the problem will lessen the more you get used to it, and your muscle memory for FIFA 22 disappears, but this has always been a FIFA game issue and it’s disappointing that it’s never been addressed.

Make the gameplay more difficult at higher levels, sure, but don’t do that in a way that ignores what the player is asking. Instead, do it in a way that increases the quality of the opposition’s set pieces and makes obtaining and keeping the ball a challenge because of the skill of the other team, not by ignoring inputs.

EA claim to have designed FIFA 23 with ‘mechanics that haven’t previously been seen on a virtual pitch’, as they update ‘existing systems to enable fresh experiences’ but thus far, nothing feels fresh. It’s a FIFA game in a new wrapper, with a handful of pleasing aesthetics and some clever technology to enhance the immersion, but from the initial couple of hours in-game, this is not a game-changer.

If you’re a seasoned FIFA player expecting a slightly more polished version of a FIFA game, you’ll get exactly what you’re expecting. If you’re an older fan who’s had a few years off, there are slight improvements but the old frustrations still remain.

Once we get more in-game hours under our belt, and are able to dip into the new aspects of Ultimate Team, a full review of FIFA 23 will be on the site later this week.