Ni No Kuni: Cross Worlds charges you extra money just to log in

Level-5 and Netmarble’s Ni No Kuni online multiplayer game was already controversial at launch and its reputation has only got worse since.

Chances are if you’ve heard of the Ni No Kuni online multiplayer role-playing game, Ni No Kuni: Cross Worlds, it’s only because of the controversy surrounding it.

Even before it launched, its decision to implement blockchain technology and cryptocurrency (with NFTs to follow later this year) was met with disdain and disappointment.

Actual players, meanwhile, are struggling to even log in and play because of crypto bots flooding the servers, resulting in lengthy log-in queues. What’s worse is that the only solution developer Netmarble seems to offer is to pay real money to bypass the queues.

However, with how dire the log-in issues are, Ni No Kuni: Cross World’s subscription is almost needed just to play it, effectively not making it free-to-play anymore.

Word of this spread across social media when Josh Torres, senior staff writer at RPGSite, mentioned it on Twitter, adding that the Daily Adventurer’s Pass, as it’s called, costs $7.99 (£6.50).

So I’m reading up on what’s been going on with that Ni no Kuni MMO. Apparently because of the crypto/NFT stuff, bots have infested it leading to long queues for servers.

Netmarble’s solution? Offer people a Daily Adventurer’s Pass for $7.99 to bypass the queue to login.

This naturally led to assumptions that players are being charged $7.99 every day and that Netmarble introduced it to deal with the log-in issues, although this is apparently inaccurate.

Those claiming to play the game themselves say that the pass has been available since launch and is a monthly payment, not daily, since the bypassing queues feature was attached to the regular monthly subscription.

Still, outsiders are less than impressed, with ResetEra user Thrill_house arguing that paying extra just to get to play it is outrageous.

‘If I had to pay extra to get into Final Fantasy 14 during the rush I would have quit that f***ing game so fast it wouldn’t be funny,’ they wrote.

‘If they are charging people eight bucks to get in because they can’t get their s*** together and made dumbass decisions that is on them full stop.’ 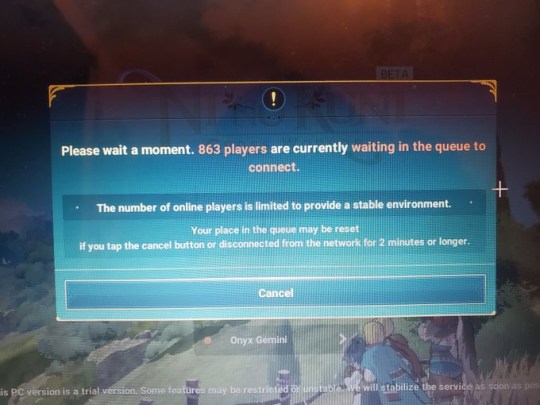 Not really free-to-play at all (pic: @VerumBoyz)

Another user named Toma, who wanted to clear up the misconceptions and does enjoy the game, admits that it deserves to be criticised and is also struggling to maintain a playerbase.

‘The login/bot thing has recently become an issue though, and I can imagine many people will be put off by it because the activity in the game is already declining quite heavily,’ they explained.

Does this mean Ni No Kuni: Cross Worlds is doomed to fail sooner rather than later? Not necessarily since the game was a huge success at launch, making well over $100 million (roughly £81.4 million) in its first two weeks, according to Kotaku Australia, and it wasn’t even available worldwide at that point.

It’s also unlikely to abandon its NFT plans considering the game appears to have been designed with them in mind. Other publishers like Konami and Ubisoft remain committed to the idea as well, while the likes of Team17 soon reneged on them when plans were met with backlash.

Ni No Kuni: Cross Worlds is available for PC, iOS, and Android.

Cult of the Lamb joins this week’s eShop roundup

Another weekend is here and that means it’s time to reveal the latest titles to hit the Nintendo eShop. This...