Set in a post-apocalyptic wasteland, Nowhere Prophet places you at the head of a group wandering in search of a safe haven at the mystical Crypt. The collapse of civilisation has left the world plagued by bandits and monsters. It is up to you to plot a course though the hazardous land and protect your followers from any dangers you encounter along the way.

The game is instantly striking with atmospheric music that immerses you into the frontier-inspired fantasy setting. The bold art absorbs you into the rich alien realm, gorgeous rock formations and unspoiled natural phenomena. Equally, the character design is distinct, creating not only a vibrant sense of the kind of people that inhabit this world but also clear distinctions between cards at a glance.

In terms of gameplay, Nowhere Prophet is predominantly a card battler. You plot your course through the map, choosing whether to take a safer route or risk more dangerous terrain. As you travel, you use up resources, including currency, food and hope. 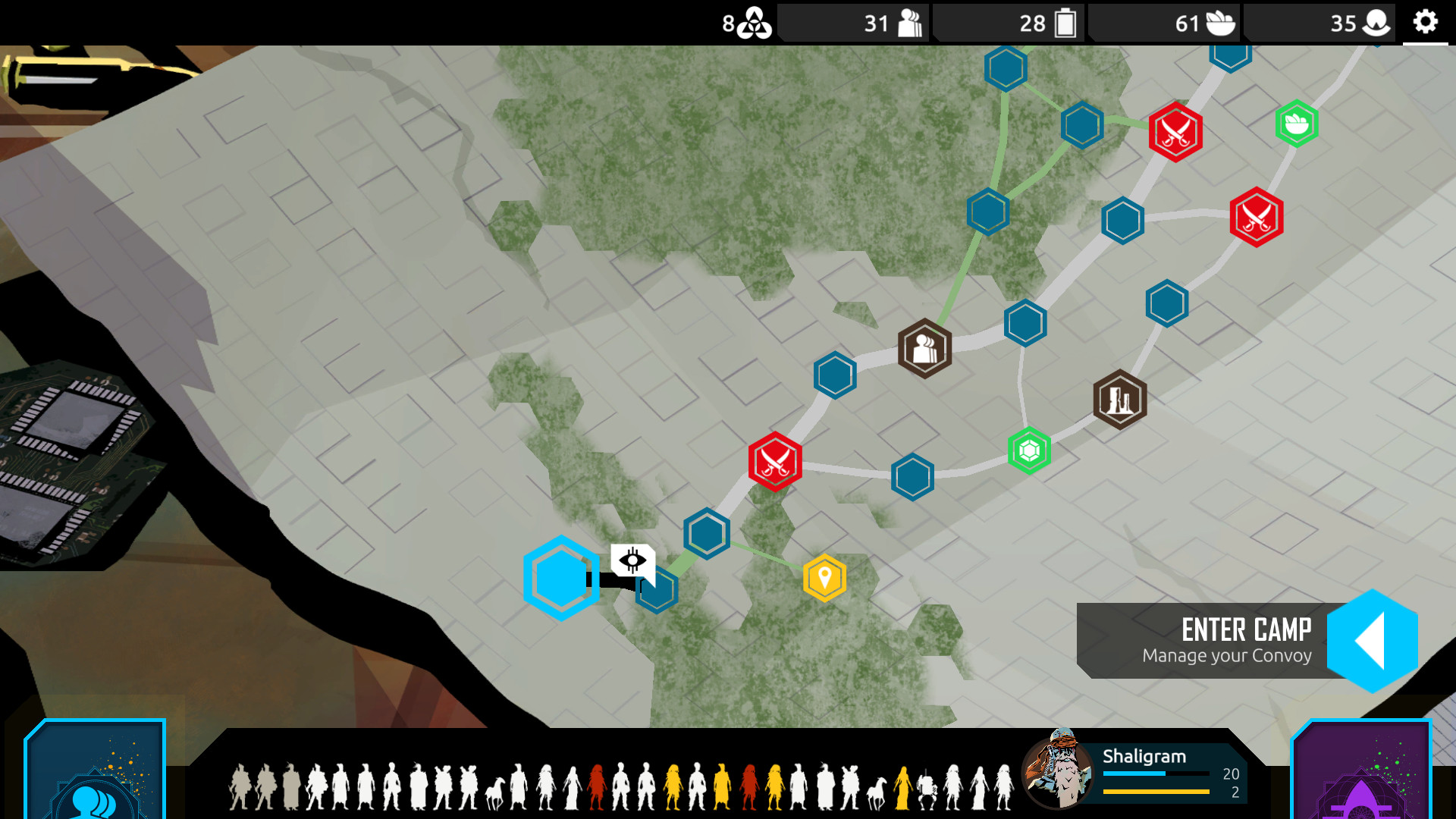 The inclusion of hope as a finite yet critical resource within the game adds to the emotional impact of it. Some random encounters will end positively and this will boost the hope amongst your people. They’ll also gain hope if you share luxury items you find amongst them. Your party suffers if it doesn’t have hope and will take a similar kind of damage as if it doesn’t have food.

Some places you can stop are clearly noted in advance as having a market where you can trade or a camp where you can recover or recruit new followers. You can find items or have conversations with passing groups in some of the regular stops and sometimes have the option to make moral decisions. For instance, you can choose to share your resources with another struggling group or pick fights in the hopes of scavenging some trophies for yourself. For the most part, though, you’ll enter into combat.

Your deck is split into two types of cards: Convoy and Leader. The Convoy deck is made up of your followers, all with different abilities. If you lose a Convoy card in battle, one of your followers is wounded. If they suffer too many wounds, they die. You have failed to keep them safe. The Leader deck is comprised of your own skills, which can either boost your team or attack your opponents. 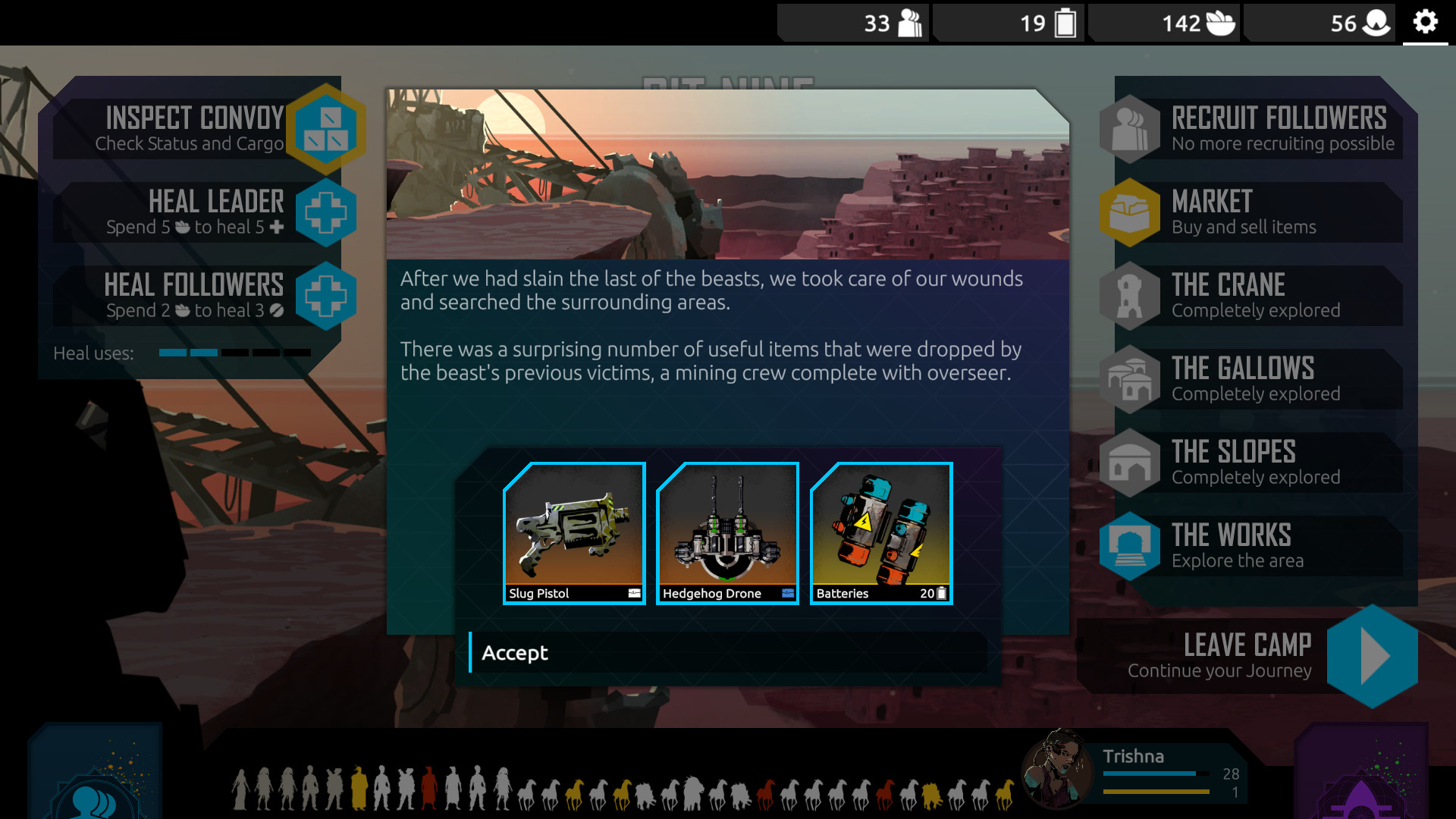 Between the randomly generated maps and the possibility to find over 300 different cards, Nowhere Prophet can be very different at each run. As you fulfil various achievements, you’ll also unlock new ways to play. As well as new cards, you can also unlock different Leaders to play as and Convoys to lead. These give the game a fair amount of variety even though the basic structure and story stay consistent for each playthrough.

Like many games of its genre, Nowhere Prophet can take a couple of runs to get used to. Once you have a more thorough knowledge of the cards and how to structure a deck, you’ll get further through the maps and be able to take on more challenging routes.

Nowhere Prophet is a genuinely well-constructed roguelike deck-builder. The story is dark and wonderfully written. The combat is fun, with a battle structure that is easy to understand and enjoyably challenging to build a strategy around. Incorporating your followers into your deck adds an emotional weight to the gameplay that draws you deeper into the narrative.