While they’re more well-known for being the minds behind the Kirby series and the inception of the Super Smash Bros. franchise, independent developer HAL Laboratory has never shied away from experimenting with new ideas outside of adored IPs. One of these ideas from 2015 came in the form of BoxBoy!, a puzzle-platform series (with heavy odes to early Game Boy titles with its visuals) in which you controlled a square-shaped character named Qbby. The series became a critical hit on the 3DS soon spawning three sequels, the most recent being on Switch. Then in 2018, HAL’s newest, adorable little project went outside of its usual Nintendo platform ecosystem with the release of Part Time UFO for mobile platforms. Now the once-mobile exclusive HAL offering has arrived on Switch with a few new bells and whistles that help translate what made it a unique mobile effort. 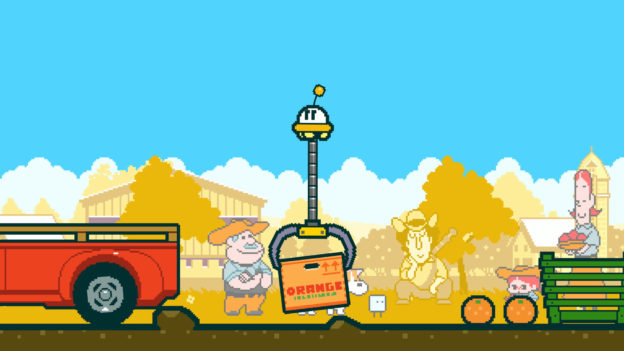 Part Time UFO is a physics-based puzzler that is akin to a crane game without the obvious cheap shenanigans involved in its real-life machinery. You control a cute, sentient UFO equipped with an extendable claw that bears a resemblance to a 1950s flying saucer mixed with BoxBoy’s Qbby. In the beginning, when you are quickly tasked to help a farmer who lost his precious cargo, you are given a magazine with various part-time jobs to help the people of Earth. Besides a few graphical upgrades here and there, the general gist of Part Time UFO has not changed from its mobile counterpart aside from the controls. In the mobile version, you had a virtual D-pad to control the UFO part-timer. And yes that control set-up works fine to a degree and is easily serviceable, but others may find it off-putting and clunky. The Switch version, though, makes it easier for those who shied away originally with a conventional D-pad and one-button control set-up for relative ease.

The goal with each job is to complete a single task by using your trusty extendable claw to grab objects and place them while balancing them in a preferred manner. These puzzle scenarios include putting back together a dinosaur skeleton at a museum, building a pyramid out of cheerleaders, or simply using your claw to catch specific types of fish. The Switch version here does include a new job area to play in which is a toy shop. With this job, not only must you grab specific toys to place in a box, but you must also close the lid on said box to finish the mission. Not only that, but within each of the jobs, you will also find some neat and wild background aesthetics that pop out the more you progress. Small details like this are one of many reasons to appreciate HAL’s attention to the weird and adorable. 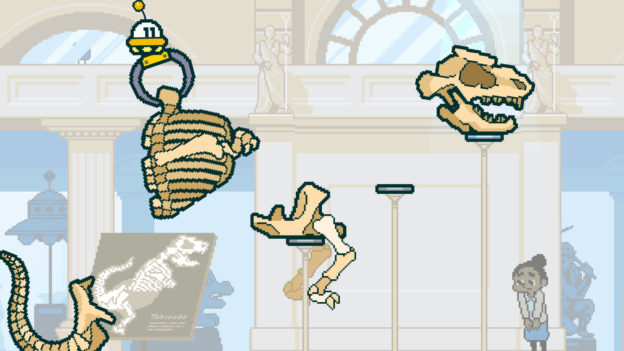 While in the process of executing these wildly fun scenarios, you also are responsible for countering the weight and balance of the objects. This becomes one of the biggest challenges you deal with when the weight of each object will also affect how you control your little UFO buddy. There will be moments when you have to put the finishing touches on an objective only for back and forth swaying from carrying that final item to crash into your own work. It’s frustrating, but all part of the process. So, that is one thing to consider when grabbing and placing certain objects is to find the best way to complete a task without one thing collapsing all your hard work. Overall, it’s a fun balancing act with its own little twists and turns.

While the beginning of each job will tell you in small details what to directly do, there are sometimes when images in the background of an area are vital to say reconstructing an ancient temple the correct way. It’s little details like this that help you in the hunt for a better score within the allotted time. Each job will have a prompt on-screen to show how many items are left to either place correctly with each flashing to indicate what needs to be collected. All of this sounds incredibly simple, but with each job, there come specific optional conditions you must meet to earn up to three medals. These medals can be awarded based on finishing a job within a specific time limit, finding a secret object, collecting a certain amount of items, or even reconstructing a museum artifact in a correct manner. The medals you earn will then unlock more jobs for you to complete along with a slightly more difficult version of previous jobs.

Now the one slight annoyance with these optional job conditions is that sometimes you aren’t sure what to do. That is, aside from the main objective presented from each job, you are shown three pictures upfront to go off of. Sure, you can make out most of these whether it’s the time limit or grabbing a certain amount of objects, but there are some that are trickier to decipher. Again, it’s a small annoyance where I found myself pausing my task way too often that it didn’t deter me away from the humbling joy on screen. 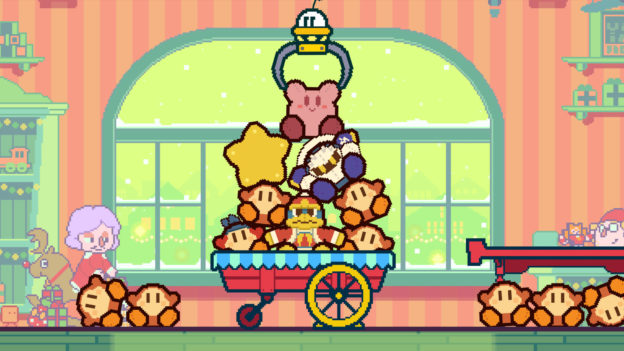 Aside from the medals you can collect, you also earn money based on the score you tabulate from placing objects in their preferred stance or location. The currency here can be used to purchase new costumes for our UFO friend. These costumes also come with their own set of perks that can be useful for various jobs you may have found to be tricky. For instance, the ninja costume allows you to fly quicker with or without carrying objects while the sailor cadet outfit makes your claw move much faster. Between wearing a drum major outfit, dressing up as a bee, or becoming BoxBoy’s Qbby, there’s no shortage of adorable, stylish looks for the little UFO.

While your time throughout Part Time UFO’s job catalog may be a short affair, there is still plenty of extra content to dive into. Besides collecting every medal between jobs, there are two new modes to explore. First, there’s Treasure Island mode, which has you going through an ancient ruin fighting extra-terrestrial enemies and finding keys to unlock secret treasure. In a way, this mode somewhat expands the potential for a full-scale Part Time UFO adventure game, which I for one would welcome down the line. The second new mode included is Tower of Infinity, and in this, you are tasked with carefully building the tallest tower you can without it collapsing or any single item falling off the wayside. Tower of Infinity had me on edge literally and figuratively when I found myself about to cross a height threshold only to see my hard work fall apart in an instant. And because you won’t know off the bat which items you will get to grab and meticulously place, each attempt becomes a palm-sweatingly exercise in weight distribution. That alone makes this new mode a great time even if you find yourself failing time and time again. 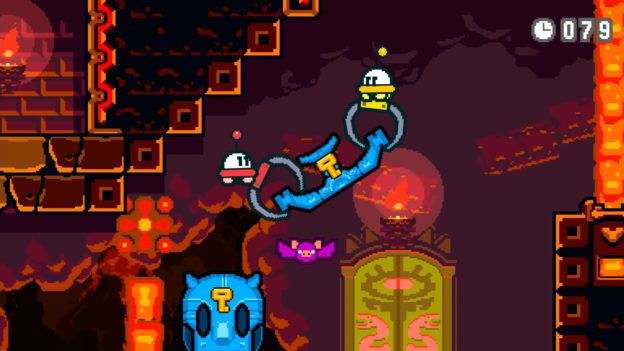 Also new to the Switch version of Part Time UFO is two-player cooperative play. With a pair of Joy-Con controllers, you and a friend can tackle more difficult versions of the previous jobs you completed in single-player. Much like the co-op in Snipperclips, there’s a lot to enjoy here when working together to complete a complicated task no matter what. And while it can be frustrating in spots as you go through more challenging jobs together, by the end you will have moments where you are either laughing, smiling or both.

When originally released on mobile platforms, Part Time UFO offered a unique take on a physics-based crane game with a cute touch and all the quirky sensibilities that HAL Labs has to offer. The Switch version leaves everything intact that made it a surprisingly fun and cheerful experience while optimizing it for the console and adding worthwhile new features. The newly included co-op is a must-play for anyone who loves to goof off in completing a tricky building task, and modes like Tower of Infinity and Treasure Island give added depth to the whole adorable feeling package. While Kirby as a franchise may occupy HAL Laboratory’s development output at times, Part Time UFO at least reassures the endless joy and charm that can always come from them.

Elden Ring delayed but you can still play it in November

Why now’s a great time to become a Twitch streamer