Sometimes a game like Project Winter comes along, having all the right concepts but ruined by the players playing the game. The idea is solid, and you can clearly see where it SHOULD all work, but because of player behaviour, actually getting it to work is near impossible. Unfortunately, Project Winter falls into this issue.

The concept of Project Winter is great, and had me extremely intrigued!  A team of between five and eight players tasked with completing or sabotaging tasks. Sabotaging tasks rest in the hands of a select few Traitors in the match. Non-traitor players have to band together to stay alive and figure out who to trust. Think of the visuals of The Long Dark with the gameplay of Among Us. The added catch in Project Winter is that everything can kill you during the game. Traitors, survivors, wolves, moose, bears, traps, hunger, the freezing cold weather are all out to kill you. It’s a unique added element that makes every decision you make feel 100 times more stressful.

Yet people being people, letting other people have a fun time in the game is simply not something allowed. I understand that this is not the game itself’s fault. Yet when this is your experience during your time with the game, it really ruins the whole experience. For this reason and more, Project Winter is hard to recommend for you to get on Switch.

The other unique element of Project Winter is the use of proximity chat. The idea of proximity chat in Project Winter is that you hear absolutely nothing unless someone, or something, is right next to you. This continues the stress trip you’re on during the game because you have no clue if you’re safe or not until it’s potentially too late. That said, it also means that someone could be murdered near you, and you hear absolutely nothing. It’s really a very immersive (and slightly horrifying) experience…when it works on Switch. 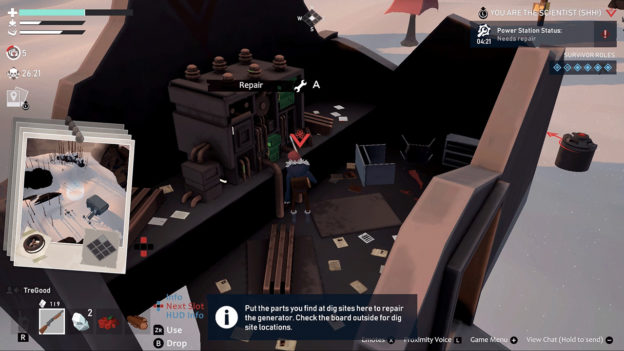 Voice chatting in Project Winter is an absolute must, yet if you (or your “teammates”) don’t have a headset plugged in, then forget about communicating. Yes, there’s a way to type messages technically. But, the typing is insanely slow and not at all the way to communicate in the game. Most of the games I played featured no one except myself using a headset. In one game, I managed to find someone else with a headset on. Unfortunately, their microphone was so bad I couldn’t understand a thing they said.

Yet, the worst part of my experience with Project Winter was the awful players I played with. I never had a single match where I played with people who were genuinely trying to play the game the right way. Players that were supposedly on my team would go out of their way to sabotage. Half the games I played, I was killed instantly by another player, who made absolutely no attempt to figure out if I was a traitor or not. In the other half of the games I played, other players would lead the traitors right to me and get me killed but not them. I understand this isn’t the game’s fault. Honestly, though, this really ruined the experience for me. It made every match I played not fun because I ultimately was just waiting for when I was going to get screwed over by fellow teammates. 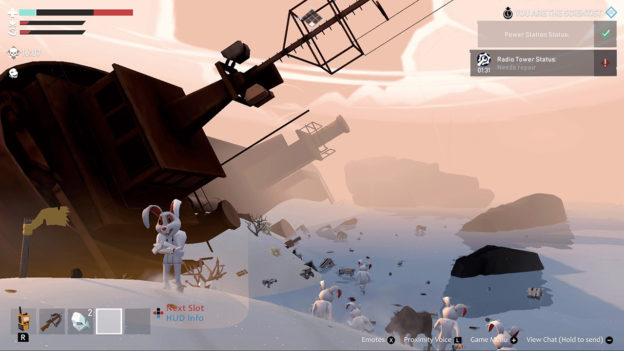 Even worse was the awful behaviour of the players in a match. The messages that would get sent through were the type of awful troll behaviour that is completely unacceptable.

It’s possible I was simply unlucky in my matchmaking. While the game does support play for you and your friends, you need a minimum of five players for a match to start. I, unfortunately, didn’t have other friends with copies of the game to try a more controlled experience. This ultimately left me in the situation I wrote about above, which is a shame because the concept of this game is so good. I guess you could sort of relate it to people’s experience with the game Among Us. Your enjoyment of the game will largely depend on the people you play with. Playing with a good large group of friends makes for a very fun and slightly terrifying experience. 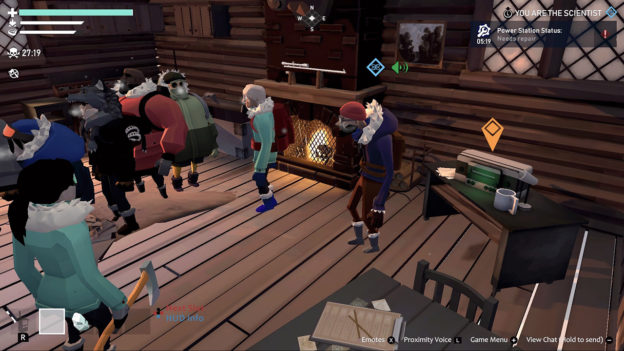 The only other issue I had with Project Winter is its steep learning curve. Everything I mentioned above, you had to learn the hard way. I didn’t realize that animals in the environment could kill you until they did. I didn’t understand how to complete objectives until I tried fiddling around with things and accidentally figuring out the solution. It’s a steep learning curve that might make the game very hard for players, even if they managed to find a good multiplayer lobby.

Project Winter is a game I genuinely feel could be great with the right multiplayer lobby. The concept is solid, and you can clearly see how the game is supposed to work. Yet my enjoyment with the game was ruined by the lobbies I was put in and the awful players I had to deal with. Again I recognize this is not the game’s fault on its own but rather its player base (or the player base I got stuck with). But, for that reason, I really can’t recommend you go out and purchase the game unless you have four other friends that want to play with you. As a solo experience, there are much more enjoyable multiplayer games you can jump into on Nintendo Switch.

Outside of platform exclusivity, Microsoft's Activision buyout could throw a spanner in the works when it comes to PlayStation's plans...