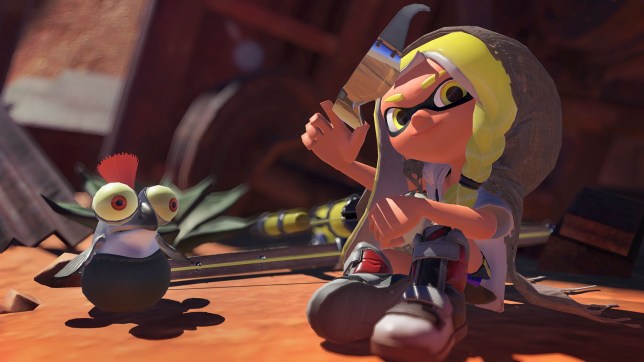 Splatoon 3 looks great but it’s not out this year (pic: Nintendo)

There may not have been any news on Zelda: Breath Of The Wild 2 in the latest Nintendo Direct but we are getting Splatoon 3 on Nintendo Switch.

The thought of a 50 minute long Nintendo Direct sent imaginations running wild in the minds of Nintendo fans, but in the end it proved to be a somewhat disappointing affair.

Although they never mentioned it as a factor, once again it was obvious that the pandemic and the complications of working from home have hit Nintendo harder than almost any other games company.

As a result, there are still almost no major first party game scheduled for this year, with the biggest being Mario Golf: Super Rush. Although there is Splatoon 3 next year…

Mario Golf: Super Rush did actually look really good, with the series always being a firm multiplayer favourite. The game allows for optional motional controls and surprisingly has a full story mode, featuring a Mii character, that seems to be modelled after the Game Boy Color iteration.

The Super Rush subtitle refers to the new Speed Golf multiplayer mode where you all tee off at the same time and then have to tear across the fairway using power-ups and special moves. It looks a lot of fun and will be released on June 25.

Splatoon 2 also looked great, with a stylish trailer showing both a post-apocalyptic wasteland and a bustling metropolis populated by both Inklings and Octolings.

There was only a little bit of gameplay footage but you could clearly make out a number of new weapons, including a bow, for use in the game’s 4 vs. 4 Turf War mode.

There’s clearly more to be revealed yet but unfortunately the game’s not due to be released until sometime in 2022.

Although somewhat underappreciated in the West, Splatoon is huge in Japan and the announcement of a new sequel will go some way to placating fans upset at the lack of new Nintendo releases lately.

There were some other new announcements but all of much smaller scale releases, such as a remaster of 3DS game Miitopia, which itself was barely more than a slightly bigger scale StreetPass game.

Miitopia will be out on May 21 but coming out a week beforehand will be the considerably more enticing Famicom Detective Club, which even Nintendo themselves described as a deep cut.

It’s a remake of two games originally only released in Japan for the NES (which is called the Famicom in its home country) and which have never been translated for the West before. The remakes are reminiscent of the Ace Attorney series and since they’re cult favourites in Japan a lot of work seems to have been put into them.

In terms of games made by Nintendo themselves that was it, beyond more promised updates for Animal Crossing, with one themed around Super Mario due on February 25.

Oddly it was originally scheduled for March, but it looks like a lot of fun with multiple different costumes and lots of Mario-related items including super mushrooms, blocks, superstars, thwomps, koopa shells and warp pipes – which do look genuinely useful as they connect two separate parts of your island.

There’s also an Expansion Pass for Hyrule Warriors: Age Of Calamity, which sort of counts as first party, although the primary developer is Dynasty Warriors makers Koei Tecmo (who also had Samurai Warriors 5 in the Nintendo Direct).

The Nintendo Direct didn’t linger on the details and the Nintendo website is pretty vague too, with only hints at an expanded roster, new weapon types, new stages and enemies, and new battle skills for existing characters.

The pass will be released in two parts, the first in June and the second in November, and will cost £17.99.

There were other interesting games in the Direct, especially Square Enix’s Project Triangle Strategy which seems to be heavily influenced by Final Fantasy Tactics and uses the same HD-2D graphical style as Octopath Traveler (there’s also a free demo available from today).

We also really liked the look of World’s End Club from the makers of Danganronpa and Zero Escape, and were very pleased to see it’s out on May 28.

Neon White from the usually reliable Annapurna Interactive (who are also bringing a port of Outer Wilds to the Switch) also seemed interesting and will be out this winter.

However, the idea of a free-to-play Star Wars game by FarmVille maker Zynga, that’s only being released on Switch and mobiles, sound about as unappealing as it’s possible to get – although at least it won’t cost anything to try.

Even the Super Smash Bros. Ultimate announcement was underwhelming, at least in terms of who they picked for the next DLC character, although the biggest upset of the night was simply the lack of news on previously announced big hitters that haven’t been seen or heard of in years now.

It wasn’t much of a surprise but Zelda: Breath Of The Wild 2 was only mentioned in passing, while Metroid Prime 4 and Bayonetta 3 didn’t even get so much as a name check.

But these are trying times and Nintendo seem to be struggling just like everyone else; maybe not in terms of sales but certainly in terms of getting new games finished in any kind of timely manner.